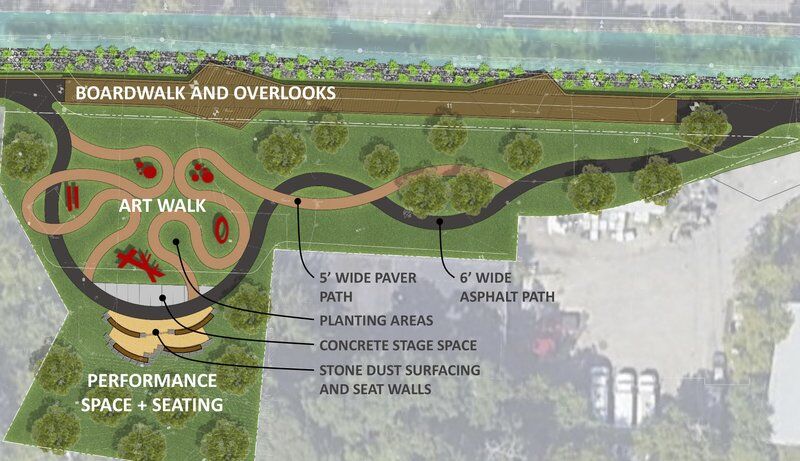 One option for 24 Caller St. is a five-foot wide meandering “art walk” that connects to the Riverwalk. 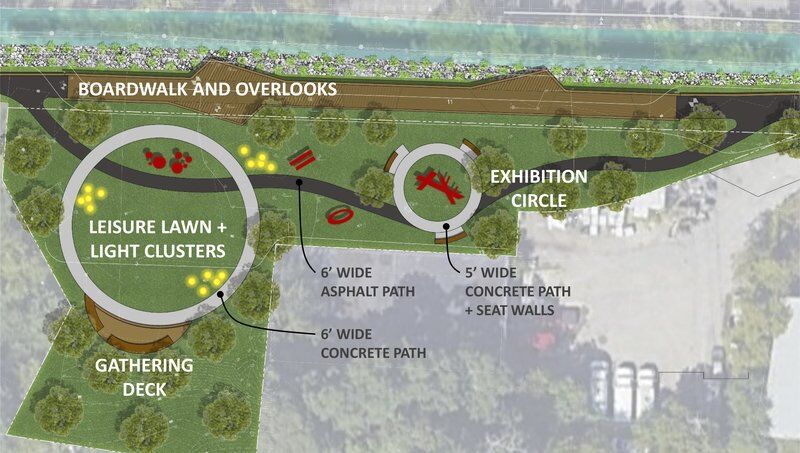 The second option features a large, elevated deck where people could gather, a “leisure lawn” and modern, artistic lighting.

One option for 24 Caller St. is a five-foot wide meandering “art walk” that connects to the Riverwalk.

The second option features a large, elevated deck where people could gather, a “leisure lawn” and modern, artistic lighting.

PEABODY — The former Clark Steel Barrel and Drum Co. on Caller Street could soon be a space where residents can ponder public art, toss a Frisbee or have a picnic with friends.

City officials and landscape architects on Tuesday presented two potential designs for a section of the Riverwalk along the North River corridor downtown. Assistant Director of Planning Brendan Callahan said the next step is to incorporate resident feedback into a cohesive design.

Residents participated in the presentation and provided feedback through a series of online polls.

Cassidy Chroust, a project landscape architect from Weston and Sampson Design Studio, explained that the Riverwalk, which will run between Main and Walnut streets and from Wallis Street to Howley Street, will predominantly be an 8-foot wide asphalt path with the exception of one 10-foot wide section of boardwalk. He also said there would be seating and greenery along the path.

“We would love to make it wider, but in order to maintain the buffer size that we are required to have, eight feet is as wide as we can go, but we do take opportunities to widen it,” Chroust said, referencing the boardwalk.

The current design features rapid flashing red lights at crosswalks where the Riverwalk intersects with the street.

A key component of potential designs for the Riverwalk is the city’s acquisition of 24 Caller St., which deed records show the city purchased in 2019 for $300,000. Callahan said the building on the site should be demolished in the next month.

One option for 24 Caller St. is a 5-foot wide meandering “art walk” that connects to the Riverwalk.

“Within some of these rounded areas (of the pathway) are opportunities for artwork to be installed,” Chroust said. “This could really be a kind of enclave for artwork.”

He said the curvy pathway “creates a nice opportunity for other vegetation to be planted there and really make it a special place.”

The second option features a large, elevated deck where people could gather, a “leisure lawn” and modern, artistic lighting. Chroust said that this design also has opportunities to display public art.

“People might desire to have more passive recreation here where they could throw a Frisbee, lay down on a blanket and have a picnic, things like that,” he said, explaining that the lawn would provide a lot of open green space.

Chroust also showed examples of the lighting proposed for this plan. The “light clusters,” he said, would be almost like art pieces themselves.

“That helps make this space a little special and also adds an additional element of light beyond the pedestrian light we are going to include anyway,” he said.

Residents who participated in an online poll during the presentation Tuesday appeared split on the two designs, but slightly more residents said they preferred a leisure lawn over an art walk.

Callahan said the construction of a Riverwalk is part of a decades-old plan to attempt to revitalize the downtown and address flooding issues. He added that while the first phase of the project will only extend to Howley Street, the city hopes to extend the Riverwalk to Mill Street, to Central Street, and eventually into Salem where it will connect to the neighboring city’s riverwalk.

Peabody - Frances P. (Murphy) O'Donnell, 88, beloved wife of the late Paul F. O'Donnell, died Sunday, January 24, 2021, at the Boston Medical Center. Born in Chelsea, she was the daughter of the late William and Regis (Fitzgerald) Murphy. She was raised in Winthrop and received her education…

Effingham - Grace D. (Spear) Barter, daughter of Daisy (O'Brien) and Eugene Spear, wife of William C. Barter Sr. of Beverly, Mass., passed away at the age of 85 with her family by her side after a long illness on Thursday, January 23, 2021. The baby of the family of 11 children, she is survi…