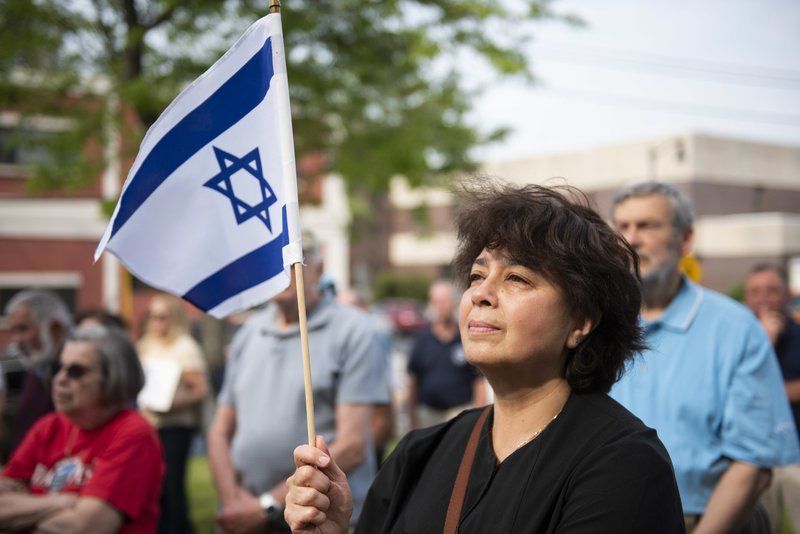 RYAN MCBRIDE/Staff photoHanna Dubrovin of Marblehead carries an Isreali flag while listening to speakers at the Rally for Peace, Unity and Inclusion at Peabody City Hall Wednesday. 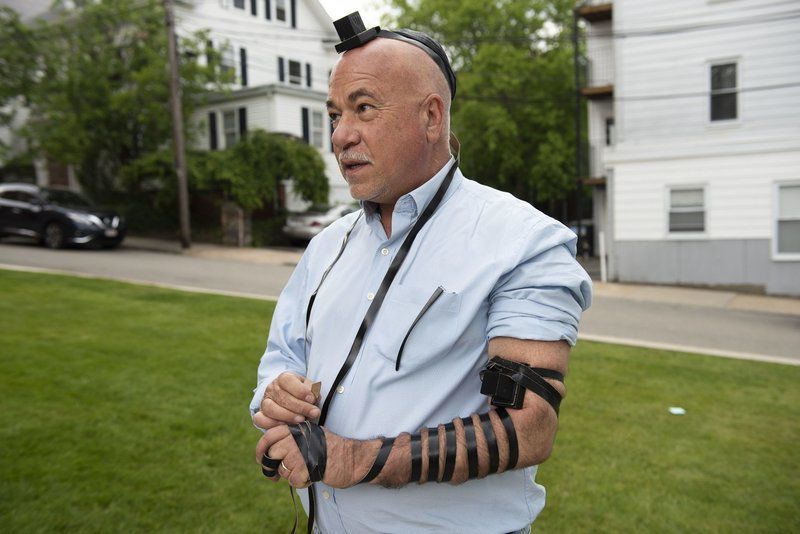 At the Rally for Peace, Unity and Inclusion Wednesday at Peabody City Halll, Jeff Shapiro of Danvers uses a Tefellin. 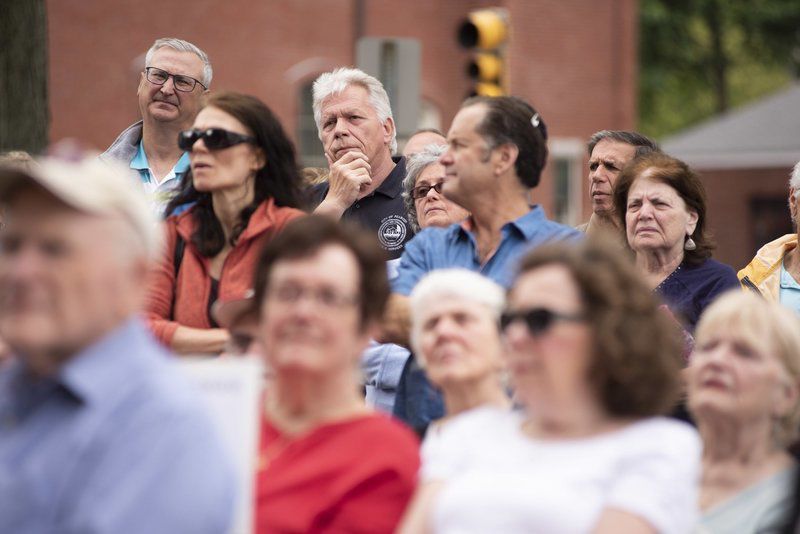 The Rally for Peace, Unity and Inclusion Wednesday at Peabody City Hall attracted a crowd of about 350 community leaders, citizens and interfaith clergy members. 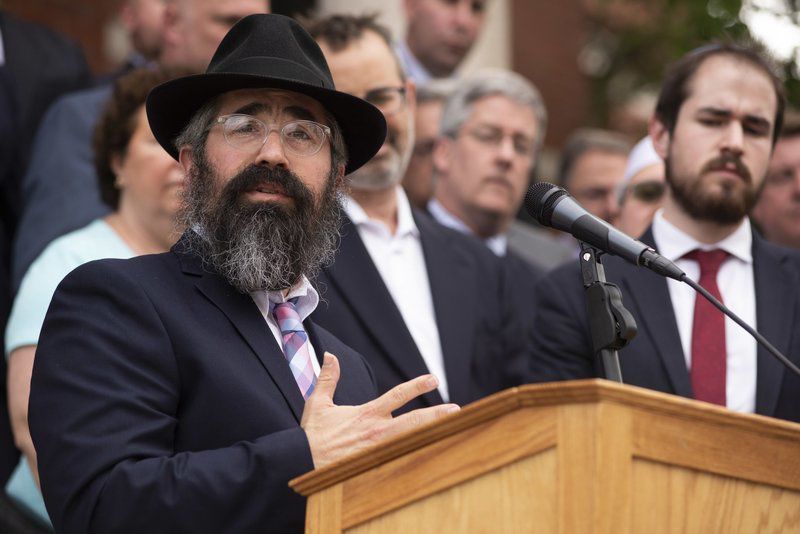 Rabbi Nechemia Schusterman of Chabad of Peabody speaks to community leaders, citizens and interfaith clergy members during the Rally for Peace, Unity and Inclusion Wednesday at Peabody City Hall. 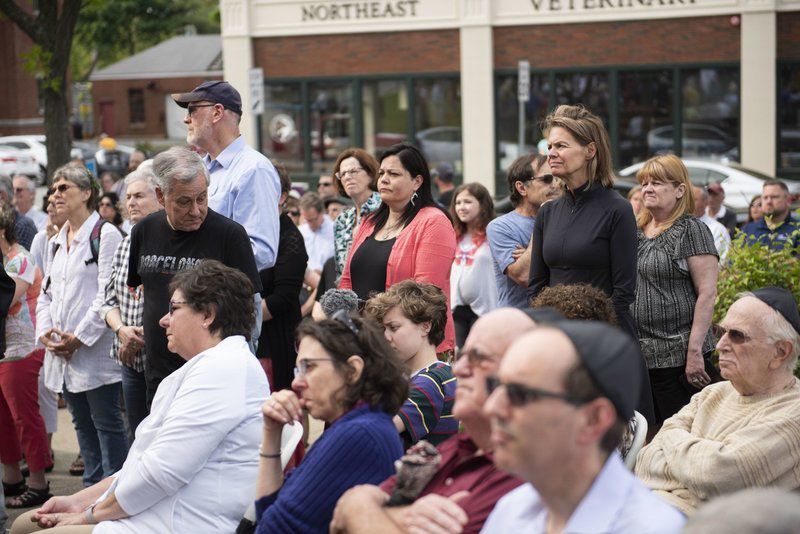 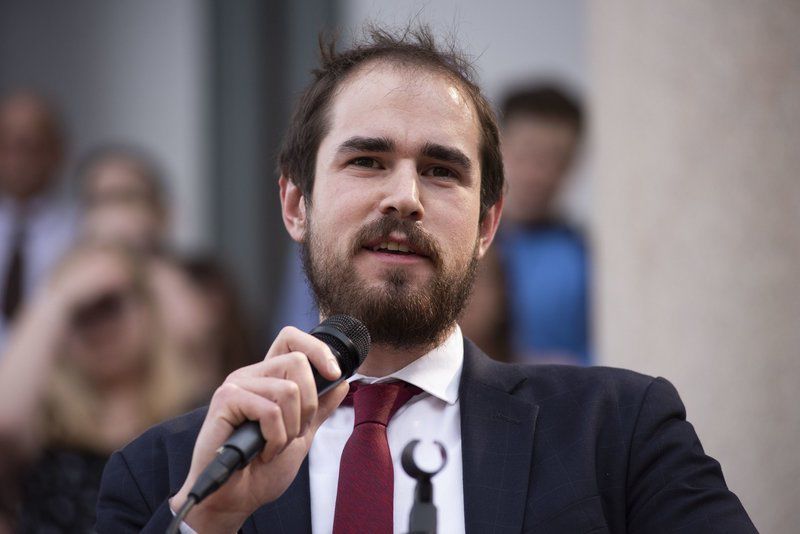 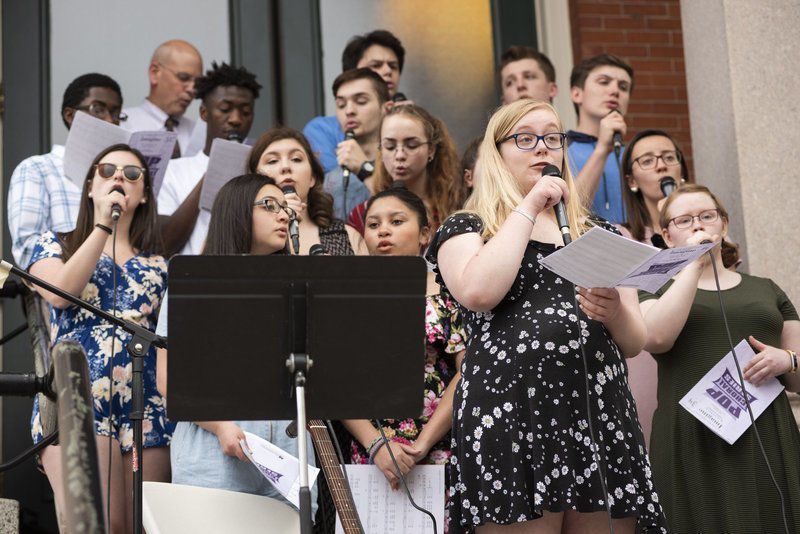 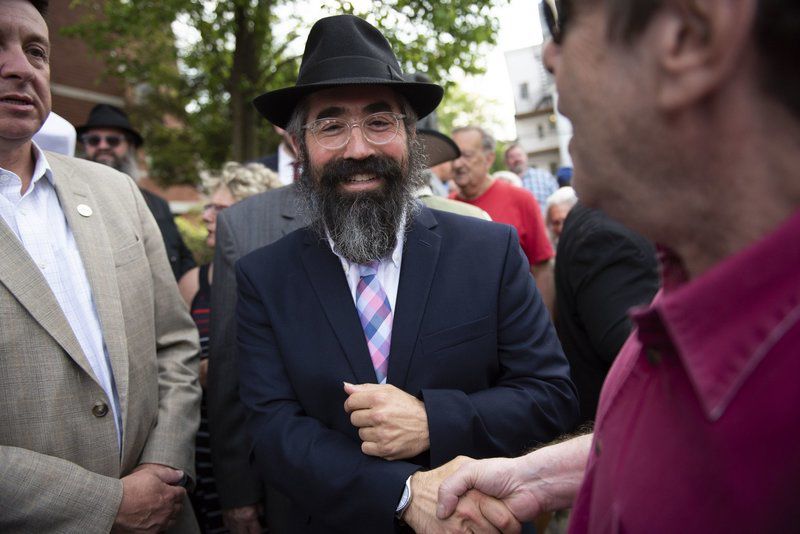 RYAN MCBRIDE/Staff photo Rabbi Nechemia Schusterman of Chabad of Peabody meets with supporters at the Rally for Peace, Unity and Inclusion Wednesday at Peabody City Hall. 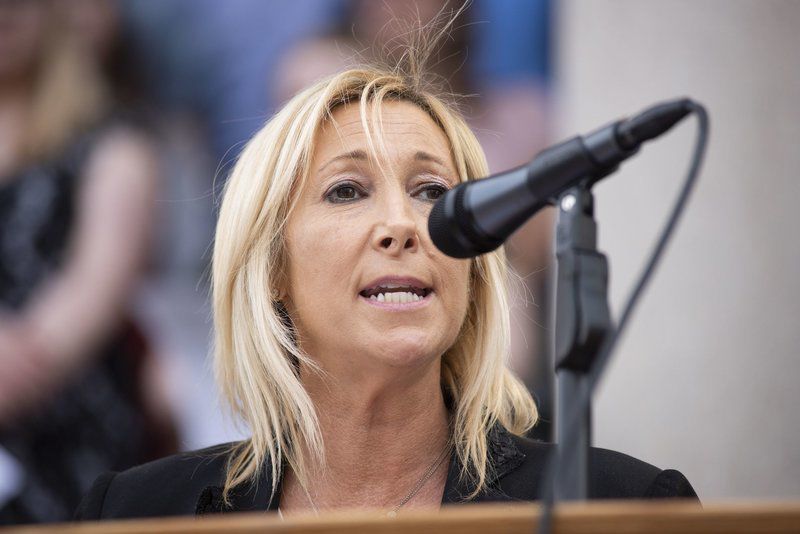 RYAN MCBRIDE/Staff photoHanna Dubrovin of Marblehead carries an Isreali flag while listening to speakers at the Rally for Peace, Unity and Inclusion at Peabody City Hall Wednesday.

At the Rally for Peace, Unity and Inclusion Wednesday at Peabody City Halll, Jeff Shapiro of Danvers uses a Tefellin.

The Rally for Peace, Unity and Inclusion Wednesday at Peabody City Hall attracted a crowd of about 350 community leaders, citizens and interfaith clergy members.

Rabbi Nechemia Schusterman of Chabad of Peabody speaks to community leaders, citizens and interfaith clergy members during the Rally for Peace, Unity and Inclusion Wednesday at Peabody City Hall.

RYAN MCBRIDE/Staff photo Rabbi Nechemia Schusterman of Chabad of Peabody meets with supporters at the Rally for Peace, Unity and Inclusion Wednesday at Peabody City Hall.

PEABODY — Peabody called out hate and anti-Semitism Wednesday afternoon with a City Hall rally that drew more than 350 people from across the North Shore.

The crowd from various cities, towns and faiths sat on chairs set on the lawn and spilled onto the sidewalk along Lowell Street.

On the steps, Jewish, Christian and Muslim leaders stood shoulder to shoulder with city councilors, school committee members, and school officials such as Superintendent Cara Murtagh.

Rabbis stood with members of the Peabody Clergy and Ministerial Association, state Sen. Joan Lovely, D-Salem, and Fawaz Abusharkh of the Islamic Society of the North Shore in Lynn.

Some in the crowd held the Israeli flag, others like Salem-based Lappin Foundation Executive Director Deborah Coltin held a sign that said “Thank you Mayor Bettencourt for standing up to Anti-Semitism.”

The crowd was there to stand in solidarity with two rabbis who were verbally accosted with anti-Semitic insults by the lead driver in a row of three or four pickups as they were out for a stroll on Lowell Street, on the Saturday before Memorial Day.

Rabbi Nechemia Schusterman of Chabad of Peabody and Rabbi Sruli Baron of Tobin Bridge Chabad were the ones who were accosted, and it was Schusterman who took to Facebook to describe what happened to them, including saying the driver hurled expletives and threw a penny at them. The post drew hundreds of comments and shares.

“Walking and chatting while visibility Jewish was apparently too much for a bunch of pickup truck drivers,” Schusterman posted.

It was Coltin who was so incensed by what happened, she approached Mayor Ted Bettencourt for a meeting, and in short order, the city pulled together the Rally for Peace, Unity and Inclusion.

“This is a tremendous turnout and a great show of unity in our city, and my heart really feels warm right now to with all of you today. I want the city of Peabody to make a statement. And I think we are doing that now. I am blessed to be surrounded by so many wonderful, caring people,” Bettencourt said.

By so many turning out from across the North Shore, Bettencourt said, it sent a powerful message that acts of hate would not be tolerated. Peabody is a welcoming community, one that is accepting of people from all different faiths and backgrounds, the mayor said. The city was built by immigrants looking for a better life, and the mayor said this melting pot has provided a source of pride and comfort for the community.

“That’s why last week’s incident is so disheartening and so despicable. It’s not who we are as a community. It goes against every value that we hold dear,” Bettencourt said. He hoped that society would be have gotten past such narrow-minded bigotry and vitriol by the 2019.

“Unfortunately, as we saw last week in Peabody, and as we too often see in news headlines across America and around the world, prejudice continues to rear its ugly head. And although we cannot wish it away, we can condemn it swiftly and clearly wherever it bubbles to the surface.”

He said the city does not tolerate the actions of those who accosted the rabbis.

Schusterman said he and his family have been comforted by police visits to their home following the attack. He was also thankful that representatives of so many organizations, such as the Anti-Defamation League, the Combined Jewish Philanthropies and the Deputy Consul General of Israel to New England, were on hand.

He thanked all those who came out for what he called “a rally for good.”

“Thank you for showing up today and being counted and standing by the local Jewish community as I know you would do for any faith that was attacked or maligned. This is a rally against anti-Semitism, against intolerance, but it’s not about me or Rabbi Baron,” said Schusterman. He said he never thought the Facebook post would catch fire the way it did.

He said if the writing of the post has some substantive good come of it, “then as they say in the Passover Haggadah, dayenu, it would be enough.”

He said when and his wife, Raizel, moved to Peabody 16 years ago, the city prided itself as being a “No Place For Hate,” city. That slogan is being put to the test, but Schusterman said Peabody is still a city that is no place for hate.

He said hiding one’s Jewish identity will not help, and at moments like this, Jews and other oppressed communities need to stand tall.

“The real solution is to root out the hate,” he said. “It needs to be uncool, unwoke to hate.”

Baron said he loves visiting Peabody and Schusterman “and the events of last Saturday have not changed that. I intend to be back and wear my yarmulke proudly and walk down Lowell Street proudly, and hopefully with all of your help, we’ll maintain Peabody as a ‘No Place for Hate’ city.”

Rhonda Gilberg, who chairs the ADL’s North Shore Advisory Committee, said that unfortunately, this is her fifth rally dealing with anti-Semitism in the past year and a half on the North Shore. It’s becoming increasingly dangerous to be Jewish in public.

“We are here today because of the courage of this community to stand up and say, ‘No!’” Gilberg said.

“Rabbi Schusterman and Rabbi Baron were targets of the same kind of anti-Semitism that we have seen throughout our country, our world and in Greater Boston in recent years,” said Shep Remis of the Combined Jewish Philanthropies. “Anti-Semitism and other acts of hatred are on the rise.”

Anti-Semitism has been on display in high schools, cemeteries have been desecrated, there have been arson attacks on Chabad Houses in Arlington and Needham and vandalism at the New England Holocaust Memorial, Remis said. Also, there have been deadly synagogue shootings in Pittsburgh, Pennsylvania, and Poway, California.

These are unsettling times for the Jewish community, Remis said, but the community knows they are not alone. Remis said no one should feel threatened for what they wear, who the love or how the worship.

Daniel Agranov, the deputy general consul of Israel, said the state of Israel has been monitoring the rise of anti-Semitism in the United States. He commended the rabbis for speaking up.

“Rabbi Schusterman and Baron are profiles in courage and role models for the rest of us,” Agranov said. “Each and every one of us must take personal responsibility and commit to ongoing vigilance to call out hatred and bigotry whenever and wherever we encounter it. If our society starts to accept these verbal attacks as normal, that is when the troubles begin.”

After the rally, Coltin, who did not speak during the rally but was thanked by the mayor for helping spark it, said she was grateful to Bettencourt.

“He called it out. He called it out. He didn’t give lip service. He didn’t say ‘they are investigating.’ He heard us,” said Coltin, a life-long resident of Peabody. She said she does not want to be afraid to walk the streets or fearful someone might rip the mezuzah off her door. A mezuzah on a doorposts signifies a home as being a Jewish home.

In addition to the speeches, the Peabody High Chorale, Full House sang John Lennon’s “Imagine” and, at the end of the program, “This Land is Your Land,” during which the crowd clapped along and joined in singing.