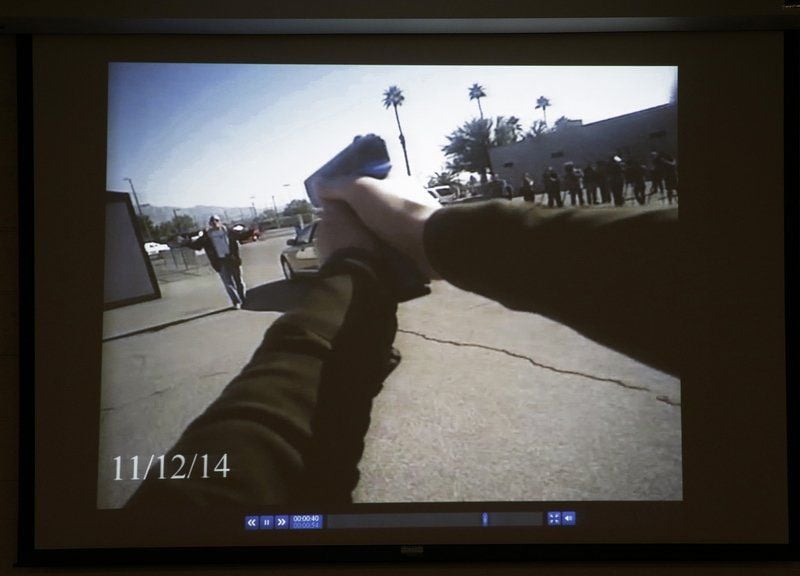 Associated PressFootage from a Las Vegas police department body camera demonstration is projected on a screen last month in Las Vegas. The camera is the same type now being used by about 200 street officers in Las Vegas. 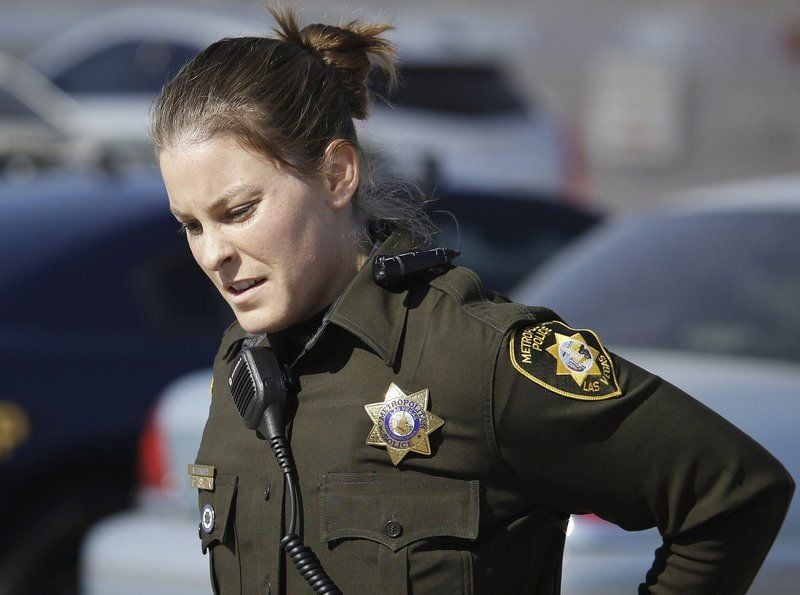 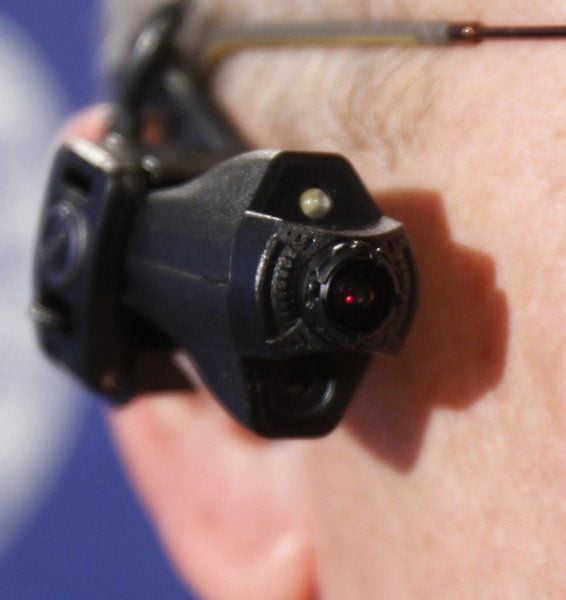 (JAMIE GREEN/AP Photo/The Wichita Eagle, In this Feb. 2, 2011 photo, Wichita Police Officer Rich McCluney demonstrates the AXON camera system which is worn on the ear similar to a Bluetooth phone and moves with the officer, in Wichita, Kan. Officials say all Wichita police officers will be wearing body cameras by the end of next year. Interim Police Chief Nelson Mosley said the police department is adding 450 cameras to the 60 it already has.

Associated PressFootage from a Las Vegas police department body camera demonstration is projected on a screen last month in Las Vegas. The camera is the same type now being used by about 200 street officers in Las Vegas.

(JAMIE GREEN/AP Photo/The Wichita Eagle, In this Feb. 2, 2011 photo, Wichita Police Officer Rich McCluney demonstrates the AXON camera system which is worn on the ear similar to a Bluetooth phone and moves with the officer, in Wichita, Kan. Officials say all Wichita police officers will be wearing body cameras by the end of next year. Interim Police Chief Nelson Mosley said the police department is adding 450 cameras to the 60 it already has.

The possibility of local police officers and state troopers wearing body cameras on the job is being met with cautious optimism after President Barack Obama announced plans to distribute 50,000 such cameras nationally.

Officials say the cameras may be valuable for law enforcement, but they are concerned about the ongoing cost of using them.

“If we get them, it’s another tool we can use,” said Lawrence Mayor Daniel Rivera.

Spurred by a fatal shooting and subsequent unrest in Ferguson, Missouri, Obama is now calling for $75 million to be spent on 50,000 small, lapel-mounted cameras.

The cameras would be worn by officers across the country to record their interaction with civilians.

The body camera proposal is a part of a three-year, $263 million spending package that would also include increased training for police and more resources for police department reform.

The cameras are seen as a way to bridge a deep mistrust in some communities between law enforcement and the public, and potentially diffuse disputes between police and witnesses, according to Obama’s plan.

Rivera, who described himself as a “Hispanic kid that grew up on the streets of Lawrence,” said he knows “there is a mistrust of police officers” in the community.

The use of body cameras, if the city gets them, may help, he said. But, Rivera said, “cameras or no cameras,” growing the ranks of Lawrence police officers and re-committing to community policing are also ways to bridge the gap and build trust. He wants to see police officers get to know community members better — and conversely, residents and police departments to know sworn officers.

“We will use every piece of equipment to make us better and make our streets safer,” Rivera said.

Police Chief Joseph Solomon in Methuen said he’s supportive of body camera use by law enforcement. And he looks forward to reviewing the national policy on body camera use.

However, Solomon said the cost of outfitting police departments with the cameras could be a heavy burden on municipal governments and he expects the federal government would need to pick up the tab.

“As a result of recent incidents across the country, it appears the concerns over individual privacy rights are outweighed by the public’s interest in knowing what occurs during law enforcement encounters,” Solomon said.

“We would embrace any new technology that would help us do our jobs more effectively and efficiently,” Patten said.

But, Patten asked, “with budget cuts, who and how would we pay for it?”

In New Hampshire, lawmakers will vote next session on whether to equip state troopers there with body cameras.

The bill’s prime sponsor, Republican Rep. Kyle Tasker, says the cameras will protect police from false accusations and the public from police abuse. Tasker introduced the bill last year but said the August shooting in Ferguson has further heightened the need for cameras to document police work.

Police officers in both states said requiring them to wear body cameras would mean a change in working conditions and would need to be discussed at the bargaining table during contract negotiations.

“We also would expect — and welcome — the state police union to weigh in on any discussion of cameras,” said David Procopio, spokesman for the Massachusetts State Police.

Speaking generally, Procopio said the Massachusetts State Police is interested in learning more about how the money for the body cameras will be allocated.

“At first blush, it’s something we’d be interested in pursuing, but we have not yet received any specific information,” he said.

Before obtaining them, Procopio said state police would need to determine how much it would cost to outfit all troopers with the cameras, “especially as we continue to prioritize securing funding for new recruit classes to restore the ranks of sworn members, something we desperately need to do.”

“Other questions, of course, involve civil liberty issues such as how long the footage is stored and for how long,” Procopio said.

He added that the State Police Department is currently exploring the use of a small amount of dashboard or body cameras in a test program.

“If this happens, it would be too small a sample size to determine how a department-wide program might look, but it is a very small, very exploratory first step,” Procopio said.

In a statement released yesterday afternoon, State Police Superintendent Timothy Alben said, “It’s naive to think that technology itself will resolve underlying issues of trust or lack thereof, between a city’s or state’s police force.”

He noted that technology, like cameras, is a tool.

“But any underlying community relations problems have to be worked out at ground level, at the grass-roots level. Cameras will not solve these problems,” Alben said.

In Methuen, Chief Solomon said cruiser cameras were used by his department in the late 1990s and later halted due to “constant concern over privacy rights as a result of the camera’s voice recording ability.”

Demands for police to wear body cameras have increased across the country since the death of Michael Brown in Ferguson in August.

Some officers in the St. Louis suburb have started wearing the cameras. And the New York Police Department became the largest police department in the U.S. to adopt the technology when it launched a pilot program in early September.

A report from the federal Justice Department indicates there’s evidence both police and civilians behave better when they know cameras are present. The report, in the works prior to the Ferguson incident, cites how footage from the cameras can be used to train officers.