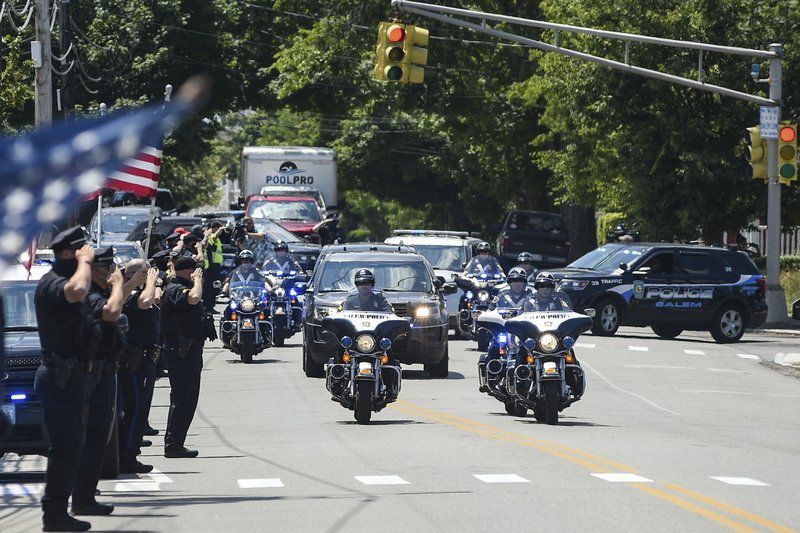 JAIME CAMPOS/Staff photoPolice officers salute during a procession along Jefferson Avenue in memory of Salem police officer Dana Mazola, who was killed in a head-on crash in Salem Thursday night. 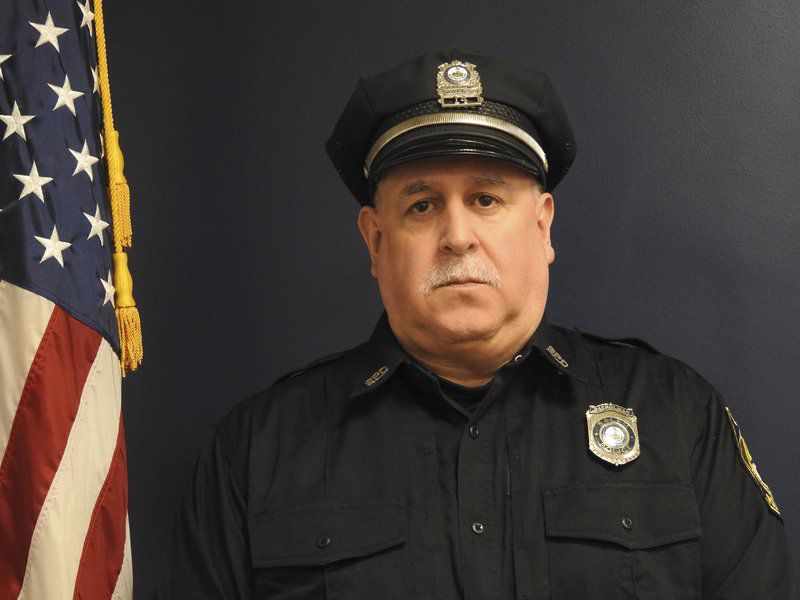 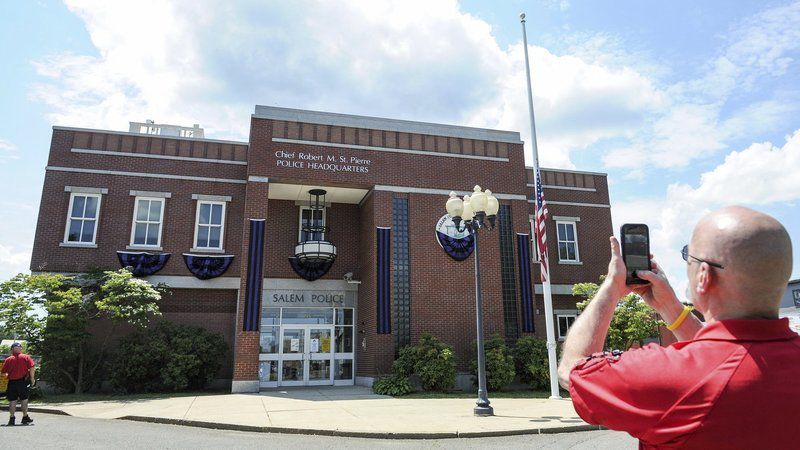 JAIME CAMPOS/Staff photoSalem fire Chief John Giunta takes a photo of bunting hung at the Salem Police Station in memory of police officer Dana Mazola, who was killed in a head-on crash in Salem Thursday night. 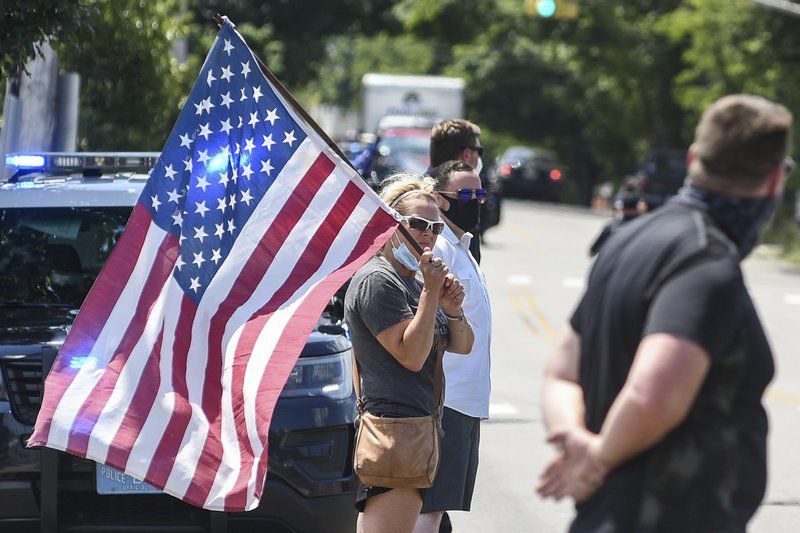 JAIME CAMPOS/Staff photo Police officers and others wait during a procession Friday in memory of Salem police officer Dana Mazola, who was killed in a head-on crash in Salem Thursday night.

JAIME CAMPOS/Staff photoPolice officers salute during a procession along Jefferson Avenue in memory of Salem police officer Dana Mazola, who was killed in a head-on crash in Salem Thursday night.

JAIME CAMPOS/Staff photoSalem fire Chief John Giunta takes a photo of bunting hung at the Salem Police Station in memory of police officer Dana Mazola, who was killed in a head-on crash in Salem Thursday night.

JAIME CAMPOS/Staff photo Police officers and others wait during a procession Friday in memory of Salem police officer Dana Mazola, who was killed in a head-on crash in Salem Thursday night.

SALEM — A veteran Salem police officer who was planning to retire soon was killed and another driver injured in a head-on collision in Salem's Castle Hill neighborhood late Thursday night.

Dana Mazola was taken to Salem Hospital but succumbed to his injuries, officials said.

Mazola, 56, of Salem, was off duty at the time of the crash, 11:20 p.m., according to the Essex District Attorney's office. The crash took place in the 300 block of Jefferson Avenue, near Dube's Seafood, less than a mile from the officer's home.

The death stunned the Salem Police Department, where Mazola had worked for the past three decades.

"No one could ask for a more loyal, dedicated and committed officer to serve the community and the department the way Officer Mazola did every single day of his 31 years on the job," Salem police Chief Mary Butler said in a statement Friday. "He was a man of integrity who had a heart as wide as the whole outdoors. There is not a single officer or employee who knew him, past or present, who is not impacted by the tragic and sudden loss of Dana Mazola."

Police set up a procession for Mazola as his body was taken from Salem Hospital to the medical examiner's office.

Mazola was driving a Toyota and the other driver, whose name has not been released, was in a Ford Fusion. That driver was also taken to Salem Hospital.

The crash is under investigation by state police. No one has been charged as of Friday afternoon, and details of what led up to the collision have not been released.

Salem Mayor Kim Driscoll said she was "absolutely devastated" to learn of Mazola's death and called it "an unimaginable and heartbreaking loss" to both his family and the whole Salem community.

"Dana was a conscientious and professional officer, a loving husband and father, and a devoted public servant to the people of Salem," Driscoll said in a statement. "He was, as we say, the ‘salt of the earth’ — a conscientious rank and file patrol officer who worked hard every single shift."

She recalled their families frequently attending the same church services, "and I fondly recall his two girls helping keep my energetic (at the time) toddler occupied while seated in the pew next to us," Driscoll said.

"Dana had a big heart and was a warm and caring family man," said the mayor. "On behalf of the residents he served with such diligence and dedication for 31 years, I want to express my deepest condolences to his wife Florene and his twin girls, Amanda and Savannah, and all of Dana’s family."

Rep. Paul Tucker, the former Salem police chief, said Mazola was "probably the most well-respected, well-liked person in the department."

Tucker said Mazola was dedicated to his daughters, who were the same age as his own daughter.

Mazola started his career in law enforcement at the Salem Jail and also worked as an auxiliary police officer in Swampscott. He was first hired in Salem in 1989 as a reserve officer and was made full time in 1990.

Mazola spent most of his career in the patrol division and the past two in the traffic division. He also conducted background checks on new hires for the department, Butler said.

He was also a mentor, acting as a father figure to new officers and a "sage big brother" to others.

But, said Tucker, "I can't remember ever getting a complaint about Dana for being rude."

Mazola also got along with just about everyone he encountered. "He had a good relationship with our homeless population," Tucker said. "He had time for everyone."

"He had a very good temperament," said Tucker, who added he had just seen Mazola at Thursday's ceremony at Salem City Hall to raise the Juneteenth flag.

"This is just awful," said Salem City Councilor Conrad Prosniewski, a retired police captain who had also talked to Mazola at the Juneteenth ceremony Thursday.

The two chatted about retirement and Mazola's plan to spend more time with his family.

Hours later, as he sat in a late-running City Council meeting, another retired officer, Larry Puleo, called with the news.

Puleo and Mazola were good friends whose humorous verbal jousting was often the highlight of roll call, Prosniewski said.

Mazola was also known for handling some of the more unusual calls.

One incident was a call to Winter Island after two workers became convinced there was a ghost in a building. On another call, he used his cruiser like a border collie to safely move a goose out of traffic and onto the shoulder on James Ayube Memorial Drive.

Mazola grew up in Swampscott, where his family ran Mazola's Corner. He graduated from Swampscott High School.

"Officer Mazola wrote those words over 30 years ago and he lived by them every day of his career," Butler wrote. "He treated all people with dignity and respect and was an outstanding representative of the department and the law enforcement profession."