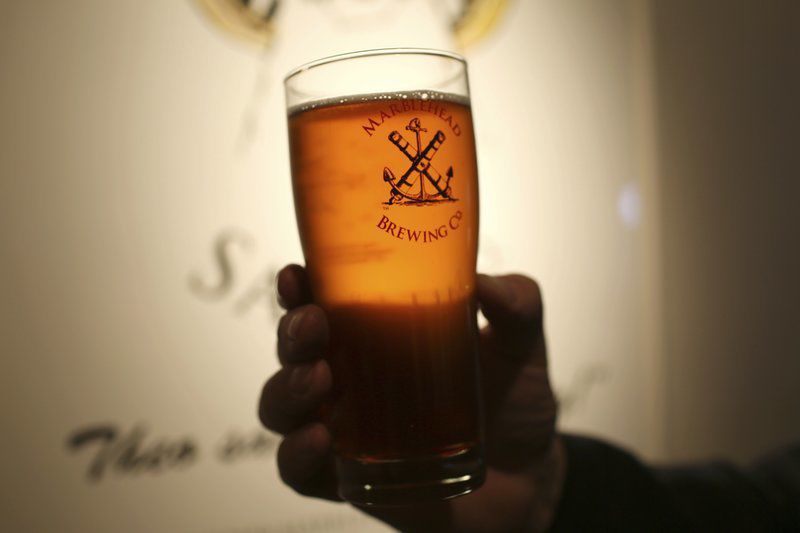 Father Andrew Bushell holds a glass of Marblehead Brewing Company beer. "The more the North Shore becomes known for quality beer, the more people will come to visit," he said. 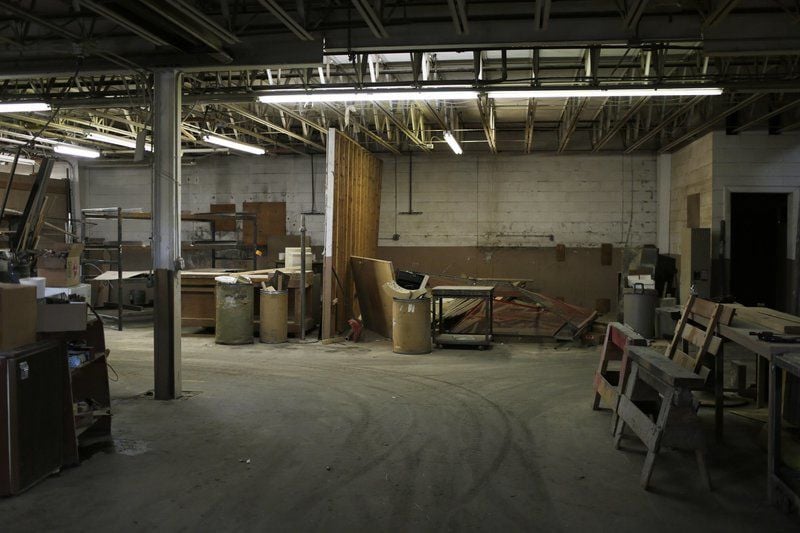 Backbeat Brewing Company will be renovating a space on Park Street in Beverly for its taproom. 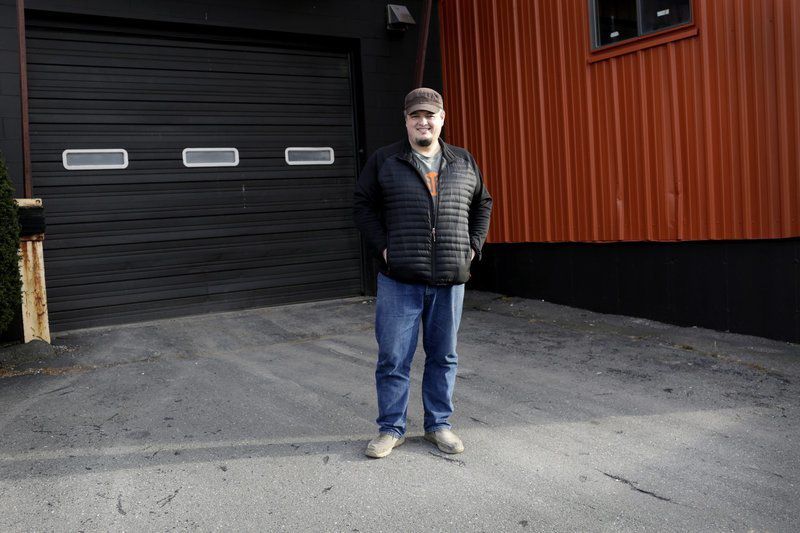 Pete Harkins is the founder of Backbeat Brewing Company. He stands at the future site of his brewery on Park Street in Beverly. 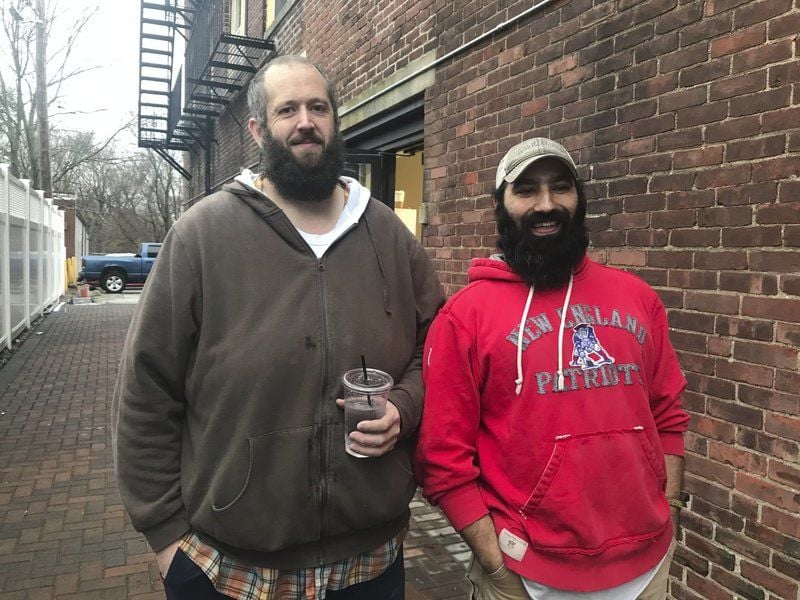 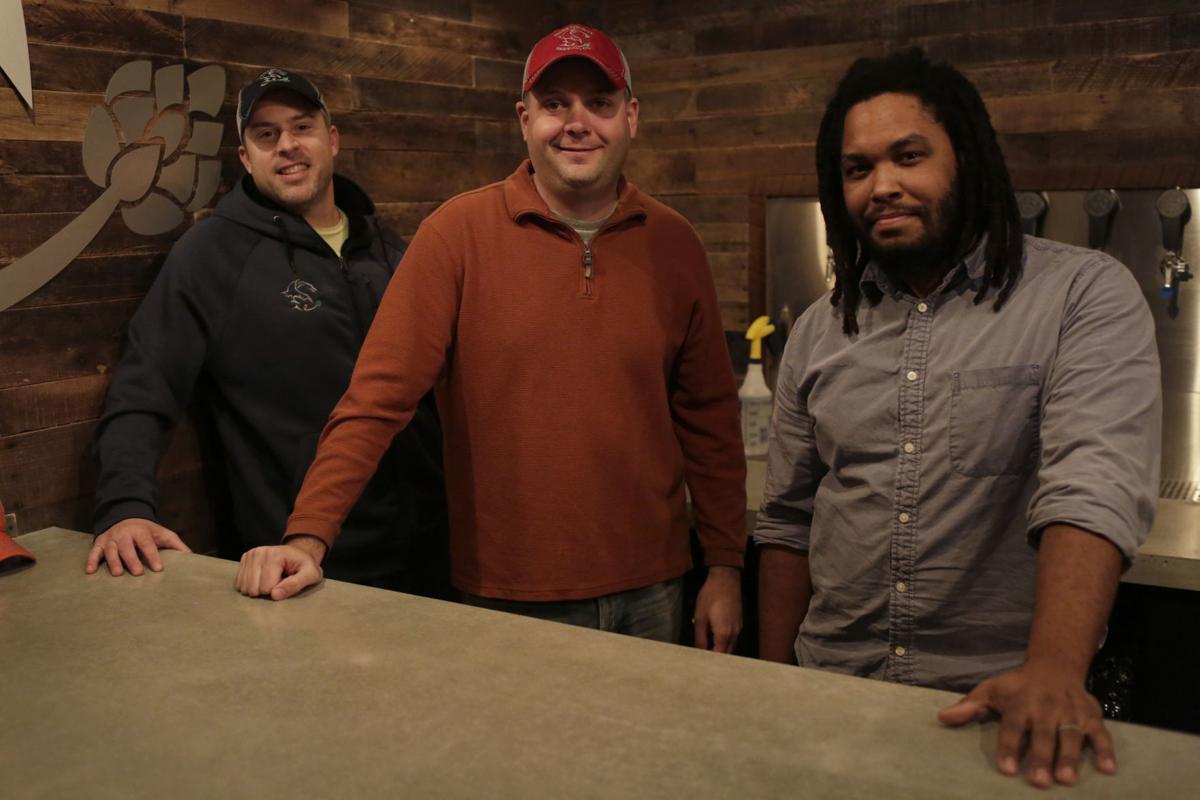 From left, Paul Donhauser, co-owner, of Boxford, Peter Doig, co-owner, of Boston, and Julian Miller, head brewer, of Essex, stand behind the counter at Essex County Brewing in Peabody. 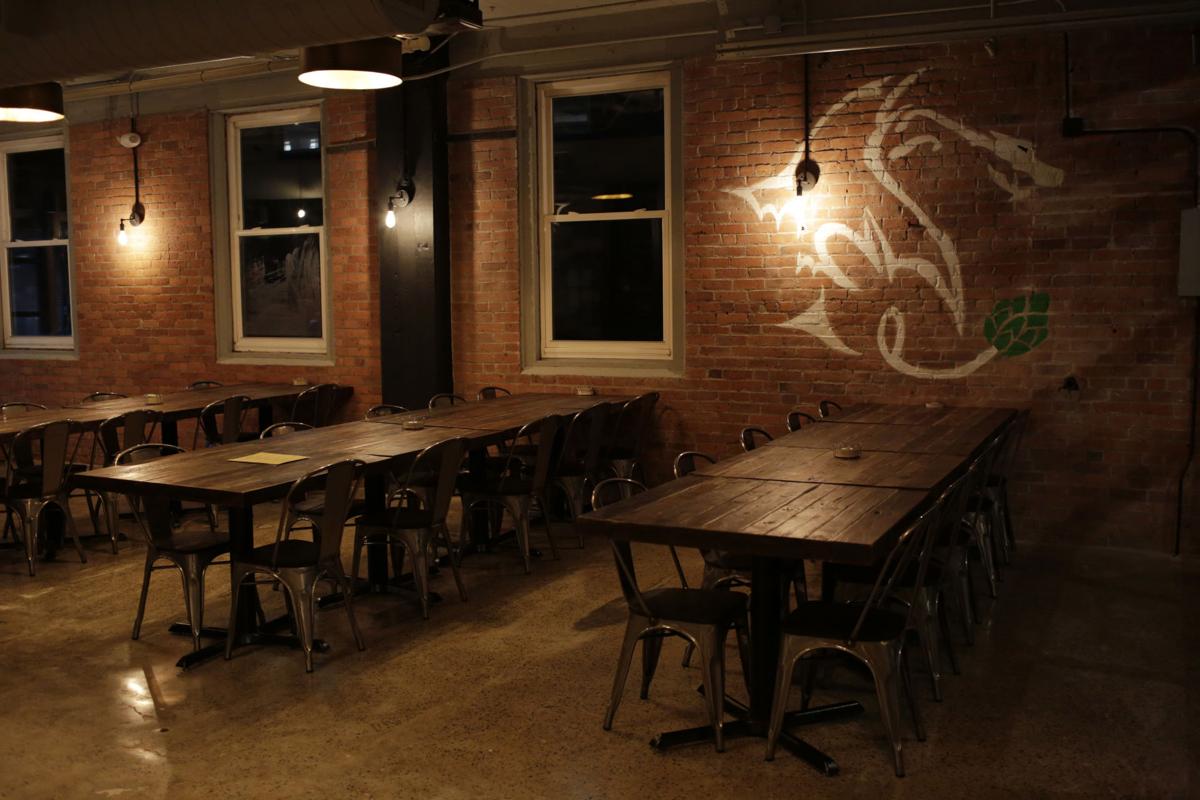 The warm interior of Essex County Brewing, which just opened in an old mill building on Pulaski Street in Peabody. 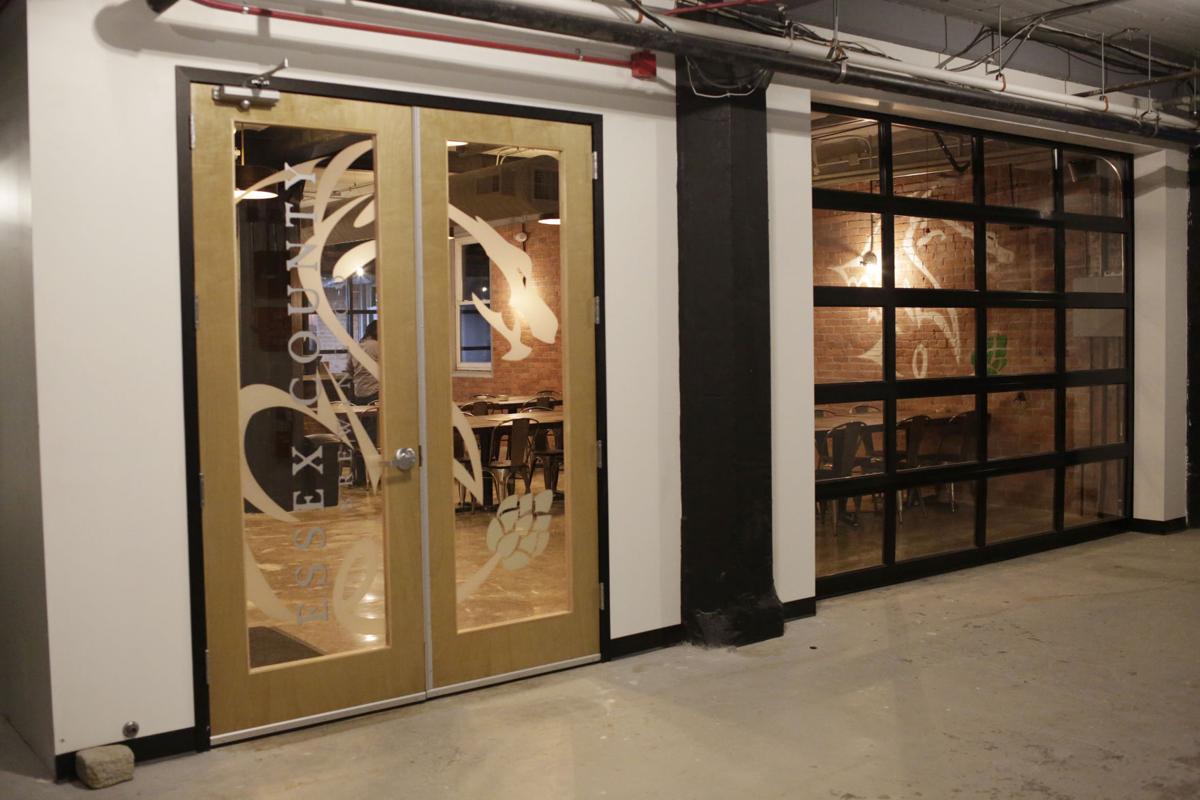 Essex County Brewing is located in the mills at 58 Pulaski St. in Peabody.

Father Andrew Bushell holds a glass of Marblehead Brewing Company beer. "The more the North Shore becomes known for quality beer, the more people will come to visit," he said.

Backbeat Brewing Company will be renovating a space on Park Street in Beverly for its taproom.

Pete Harkins is the founder of Backbeat Brewing Company. He stands at the future site of his brewery on Park Street in Beverly.

From left, Paul Donhauser, co-owner, of Boxford, Peter Doig, co-owner, of Boston, and Julian Miller, head brewer, of Essex, stand behind the counter at Essex County Brewing in Peabody.

The warm interior of Essex County Brewing, which just opened in an old mill building on Pulaski Street in Peabody.

Essex County Brewing is located in the mills at 58 Pulaski St. in Peabody.

PEABODY — Jeff Marquis of Marblehead and Rob Dunn of Lynn are hard at work trying to open Granite Coast Brewing Co., which will be Peabody's second brewery.

Their taproom and brewhouse are taking shape in a space formerly occupied by Pat's Discount at 77 Main St. — not without some difficulties. Dunn, who teaches science at the Saltonstall School in Salem, can't say for sure when they will open due to "construction woes."

One thing the new brewers are not worried about, however, is competition.

Ask them whether there are too many craft breweries on the North Shore, and they say, "The more the merrier."

The North Shore may appear to be frothing over with local craft breweries and taprooms, but "we are nowhere near saturation level," said Marquis, Granite Coast's head brewer.

"People have been, like: 'Well, there is too much saturation in the market now in Massachusetts.' It's not true in any way, shape or form. There is so much capability to sell, especially at places like this. It's a drop in the ocean compared to what is consumed annually in the state."

According to various reports of brewery openings, the North Shore will soon have nearly 20 breweries, great and small, if current plans materialize.

The new breweries would join well-established ones like Ipswich Ale, the granddaddy of craft breweries in New England, and Notch Brewing in Salem. Notch may soon be joined in Salem by a microbrewery, called East Regiment Beer Company, that is under construction on Church Street.

Katie Stinchon, executive director of the nonprofit Massachusetts Brewers Guild, said there are more than 160 breweries in the state, with 30 slated to open next year. When the association started in 2007, there were 34.

Stinchon hears the question about whether there are too many breweries here. The ones that are successful are those that "are putting out quality liquid," she said, and are focused on their communities as a neighborhood gathering place. Many have become the focal point of downtown revitalization efforts, she said.

Helping each other out

Marquis would like it if Granite Coast could become a stop on the Salem Spirits Trolley tour, which runs in the fall and makes stops at Deacon Giles Distillery, Far from the Tree Cider and Notch Brewery, all in Salem.

Karen Scalia, founder of Salem Food Tours and Salem Spirits Trolley, said one of the things people ask her about on food tours is locally produced food, especially beer. While the public spirits trolley stops only at the Salem craft brewers and distillers, private and corporate groups may choose to travel to breweries in the region.

"Beverly, within the next year, is going to have four or five breweries in their downtown," Dunn said. "You have got to have a way to do tourism between the locations that just helps each other out."

The first craft brewery to open in downtown Beverly was the family-owned Gentile Brewing Company, which has been open the past couple of years at 59 Park St.

A few doors down, home brewer and Beverly native Peter Harkins and his wife, Amy, are planning a brewery and coffee roasting operation inside the Beverly Patten machine pattern shop at 31 Park St. Harkins has even painted the building orange, which is the color of Backbeat Brewing Company's logo.

"That is what is going to be my differentiator in the market place," said Harkins about his plans to brew beer, roast coffee beans, and open a cafe for commuters heading to the commuter rail station across the street.

Harkins, who has been home brewing for 15 years, said other brewers were surprised when he announced his plans.

"You got Paul (Gentile) five doors down ... you got Channel Marker, that is over in the Porter Mill (Studios) ... You got Old Planters, that is going in where McNeil's Radiator is (on Rantoul Street). So, I mean, you got four of us who are going to be within two blocks of each other."

"I think it's phenomenal," Harkins said. "I think it's fantastic." He plans to have a map in his brewery directing patrons to other breweries in the area.

Farther afield, the Great Marsh Brewing Company in Essex is under construction at the former site of the Fortune Palace on the Main Street Causeway, with the goal of opening later in 2019.

Owner John Collins, a former software executive who lives in Hamilton, said his brewery will have an outdoor beer garden, taproom, a full-service restaurant and sweeping views of the Great Marsh in what represents a $10 million investment.

Collins said there is so much quality craft beer out there, that the days of a brewery trying to distinguish itself as a "marquis beer" are over. He said breweries are better off trying to create an environment and a destination.

"Create a cool vibe, create a reason to hang out there," he said. Consumers also like variety, so the more breweries there are, the better.

"Everyone is out to help everyone else," Collins said, noting that craft brewers often share recipes and ideas.

The first craft brewery to open in Peabody was Essex County Brewing, which did so last month in a mill at 58 Pulaski St. During its first weekend, nearly 1,000 people showed up.

The brewery and taproom, which is open Fridays and Saturdays from 4 to 8 p.m., is the creation of friends, co-workers and home beer fans Peter Doig, 37, a Topsfield native who lives in Boston, and Paul Donhauser, 45, who grew up in Hamilton and lives in Boxford. Head brewer Julian Miller lives in Essex.

They said the Peabody market was "thirsty" for a brewery, given a gap in the market between those to the south in Salem and Beverly, and those to the north in Ipswich.

"If you are making a great beer, there is a place for you," said Gary Rogers, True North Ale Company's co-founder and chief of business operations. The large brewery opened in Ipswich in the fall of 2017. "There is so much creativity in this business."

Last year in Marblehead, Father Andrew Bushell started an Orthodox Christian monastic brewery at the St. Nicholas Shrine, 124 Pleasant St. It was the town's first craft brewery. It is also unique in that 90 percent of its profits go to charitable work, Bushell said.

"I think it’s wonderful that so many people are interested in beer and beer culture," Bushell said. "Marblehead is unique as we are a monastic brewery, one of three in the U.S., and the only monastery brewery with a tasting room — but the more the North Shore becomes known for quality beer, the more people will come to visit."