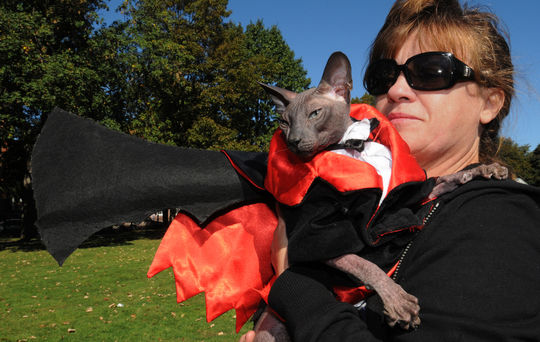 Donna DiGiovanni holds Brandon, a peterbald cat, who is in a bat costume that won the title of Best Costume, for cats, during the Bootiful Pets outdoor Halloween costume contest for dogs and cats on the Salem Common yesterday morning. They are from Peabody. 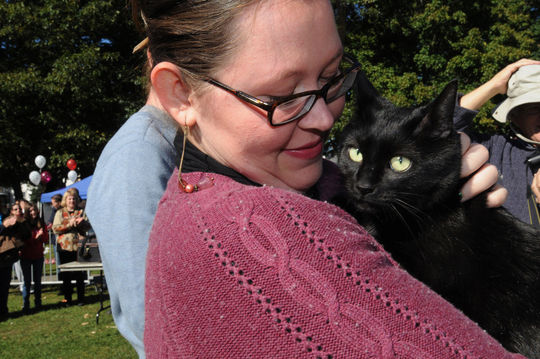 Liv Radue of Salem holds Maxwell, a domesticated short-haired cat, who won the title of Official Cat of Salem during the Bootiful Pets Halloween costume on Salem Common yesterday morning.

Donna DiGiovanni holds Brandon, a peterbald cat, who is in a bat costume that won the title of Best Costume, for cats, during the Bootiful Pets outdoor Halloween costume contest for dogs and cats on the Salem Common yesterday morning. They are from Peabody.

Liv Radue of Salem holds Maxwell, a domesticated short-haired cat, who won the title of Official Cat of Salem during the Bootiful Pets Halloween costume on Salem Common yesterday morning.

SALEM — Maxwell charmed the crowds and the judges with his struggle-turned-success story, winning the Official Cat of Salem title during the annual Bootiful Pets contest on Salem Common yesterday.

Maxwell — a 31/2-year-old black, short-hair cat with green eyes — was rescued from a hawk attack when he was 4 weeks old and adopted by Salem residents Liv and David Radue.

"His life had an adventurous start," Liv Radue told the crowd of pet owners and onlookers gathered by the gazebo on the common yesterday morning.

She said Maxwell shook off the early trauma and is now a friendly and photogenic feline, as evidenced by the family calendar that boasts pictures of him, including one as Mr. October. (The Radues brought the calendar from home to show the judges.)

"He's available for all openings of shopping centers, ribbon cuttings, etc.," said emcee Kathy Streacker, prompting laughter from the audience of about 100 people who gathered around a fenced-in area in which cat owners walked with their cats to show them off to the crowd and the judges.

The cat costume contest was won by Brandon, a vocal, 2-year-old hairless peterbald cat, who was dressed as a bat, with wings and all. He is owned by Donna DiGiovanni of Peabody, a breeder who operates Sleekats Cattery.

Shadow, a 11/2-year-old long-haired black cat whose nickname is Squirt, snagged second place in the costume contest. His owners, Elizabeth and Damien Rudzinski of Salem, dressed him as a bat, too, and decorated his cat carrier with bat shapes to make it a "bat cave."

The Rudzinskis also entered him in the Official Cat of Salem category.

"I just think he looks like the perfect cat of Salem," said Elizabeth Rudzinski, who also noted Squirt's orange-colored eyes.

Willy, 3, another Salem cat, was dressed as a cowboy with a red bandana around his neck and a miniature cowboy hat, which garnered him second place in the costume contest.

"He's a rescue cat and he loves people," said Willy's owner, Michael Kauffman, whose wife, Diana (wearing a cat ear headband), paraded Willy through the enclosed area during the judging. "He has huge green eyes."

The cat contest kicked off yesterday morning around 10, a few hours before the annual Bootiful Pets dog contest at the same spot on the Salem Common, which drew about 50 dogs. The event is part of the city's Haunted Happenings festival; the pet costume contest originated about 20 years ago, according to organizer Donna Michaud.

Pet owners paid $5 to register an animal in the contest.

Fewer than 10 cats entered the cat contest yesterday, and organizers said they will consider holding it indoors next year in case pet owners are wary of bringing a cat outside on the Common.

Staff writer Amanda McGregor can be reached at 978-338-2665 or amcgregor@salemnews.com.

2nd Place — Shadow "Squirt," 11/2, dressed as a bat in a bat cave. Owned by Elizabeth and Damien Rudzinski of Salem

Honorable mention — Luna, 2, dressed as a witch. Owned by Sherri and Donna DiGiovanni

1st Place — Abby, Kaiba and Chloe dressed as "knights in shining armor," 3 Yorkies rolled in on a horse and 2 little boys dressed as knights. From Revere

2nd — Frosty the Snowman and One-of-a-kind Snowflake dressed as "football player and cheerleader," owned by Faith Blackman of Swampscott

3rd — Oscar and Noah dressed as "Bert and Ernie", owned by Chris Healy of Salem

1st — Thunder, dressed as a ballerina, owned by Piper Lange of Manchester

2nd — Pepsi, dressed as a bee, from Salem

3rd — Comet, dressed as a Chippendales dancer, owned by Eric Beaudry of Salem

1st — Onyx, dressed as a spider, from Long Island

2nd — Snowball, dressed as a pink witch, from Salem

3rd — Loki, dressed as a black widow, owned by Lynn Harrington of Salem

1st — Chi Chi, dressed as a baby in a carriage, owned by Donna Clark of Salem

2nd — Charlie, dressed as a turkey, owned by Tim Clements of Salem

1st — Macie and owner Ana Stefanski of Salem, dressed as Hippie Groovy with the dog in hippie-mobile

2nd — Guiness, of Peabody, and owner dressed as "The Princess and the Frog" with the dog on a lily pad

2nd — Coco Minelli, dressed as a bumblebee, owned by Stephanie and Scott Siniscalchi of Salem