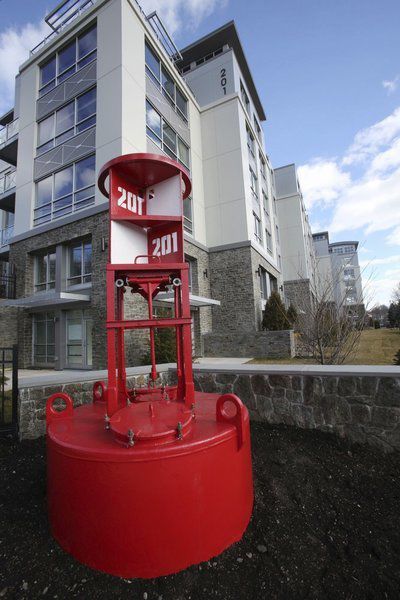 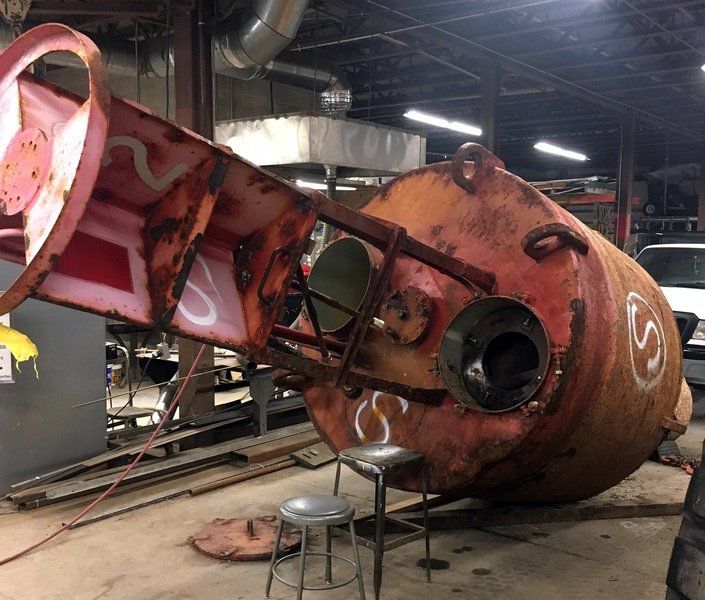 Courtesy photo/Cummings PropertiesBefore restoration, this U.S. Coast Guard buoy was covered in rust. With the rust scraped away and a new coat of paint, the buoy stands in front of the new Elliott Landing condominium complex.

Courtesy photo/Cummings PropertiesBefore restoration, this U.S. Coast Guard buoy was covered in rust. With the rust scraped away and a new coat of paint, the buoy stands in front of the new Elliott Landing condominium complex.

While its seafaring days are long over, this U.S. Coast Guard relic has found new life after a layer of rust was scraped away and it was repainted to its former glory.

It represents not only Beverly’s nautical history, but also the waterfront location of the new residences, according to Lucas Toffoli, a special projects manager for Cummings Properties.

As Cummings has continued to sell condominiums in Elliott Landing — more than 60 percent have been sold — workers were considering what kind of public art should go in the very visible area at the intersection of Elliott and McKay streets.

With the city’s rich seaside history in mind, Cummings turned to the local Coast Guard to see if it had a buoy or navigational aid that could be repurposed.

“They were as happy with the idea as we were,” Toffoli said, “and really helped us find a way to make it happen.”

After a public bidding process, Cummings paid $1,000 for the 6,500-pound buoy. The money went to the Base Boston Morale, Well-Being and Recreation Division, which helps those in the Coast Guard.

The buoy was brought to Cummings on Jan. 3. There, Cummings workers were able to do the several days of restoration themselves.

“It was a fun, sort of a different project for them,” Toffoli said.

It then took about five minutes a couple Saturdays ago to place the buoy in its new spot.

“We feel like it really anchors that corner of the development,” he said.

Workers were able to use its existing conduits to install a new light on top.

The buoy has certainly been noticed by passers-by, according to Toffoli. He knows it was deployed throughout the North Atlantic, but he wants to firm up the facts and put a marker in front of it.

“We’ve gotten some feedback; most people like it,” he said.

Originally, Cummings was reviewing submissions from Montserrat College of Art students for a sculpture. But they weren’t exactly what Cummings had envisioned for the space. Instead, Cummings awarded $15,000 to the college and proposals with the highest scores after evaluation, according to Steve Drohosky, Cummings Center vice president and general manager.

The buoy, Drohosky said in a news release is “in keeping with Cummings Properties’ longstanding practice of rescuing and recycling pieces of history — just as we did when we turned ‘The Shoe’ into Cummings Center.”