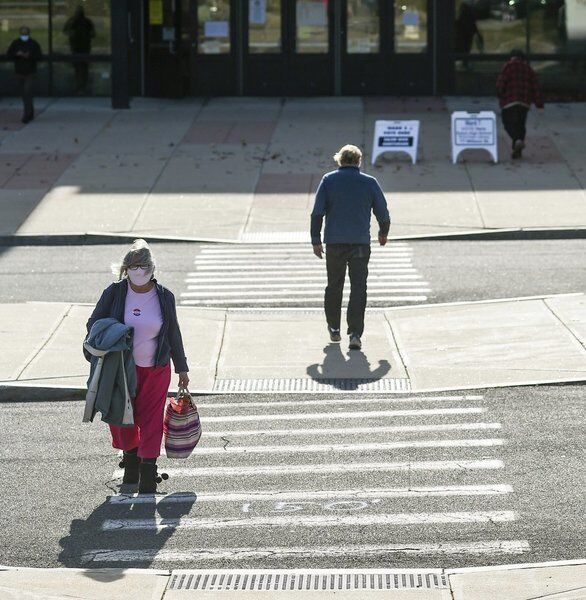 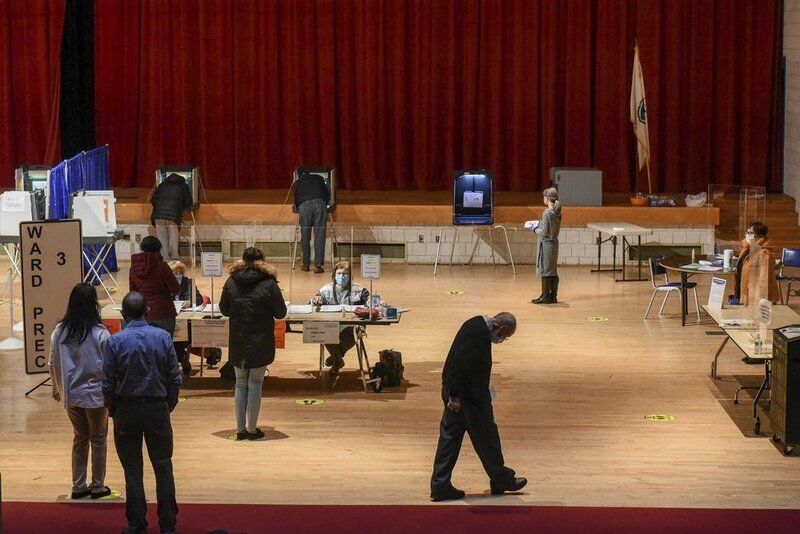 People cast their votes at Ward 3 at the Salem High School during the 2020 elections in Salem. JAIME CAMPOS/Staff photo 11/3/2020 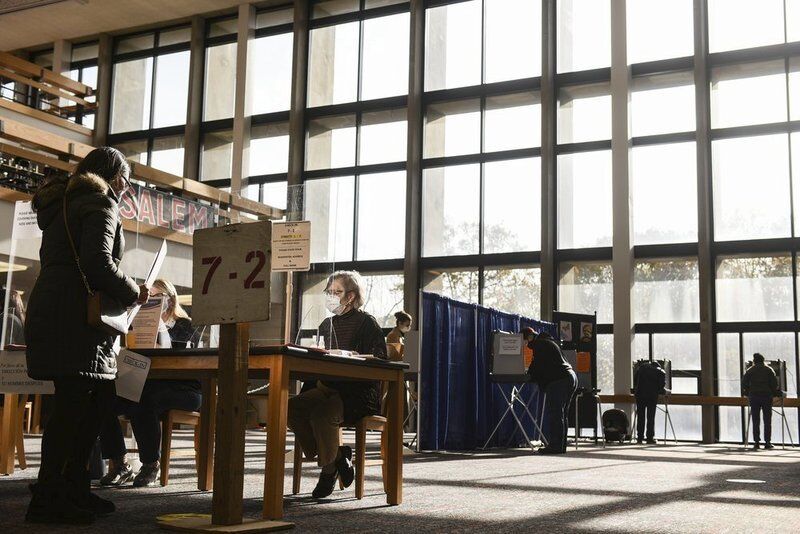 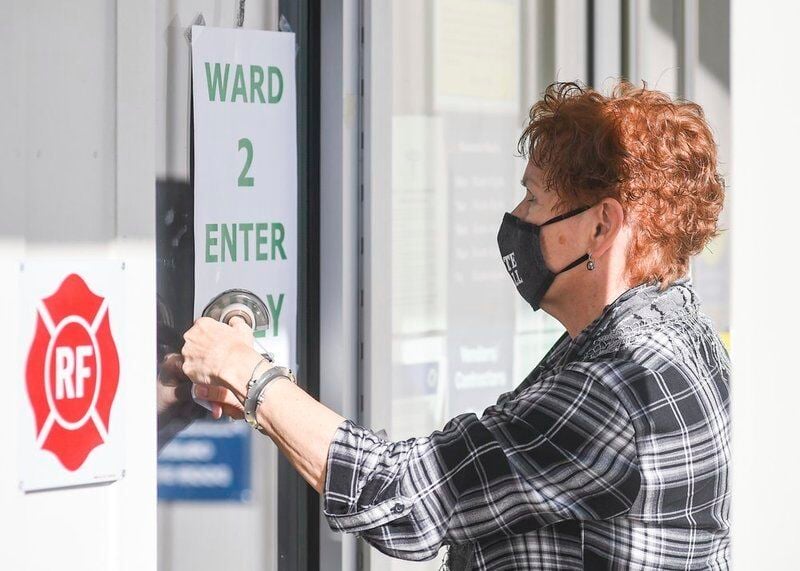 An election staff member applies tape onto a sign at the Community Life Center during the 2020 elections in Salem. JAIME CAMPOS/Staff photo 11/2/2020 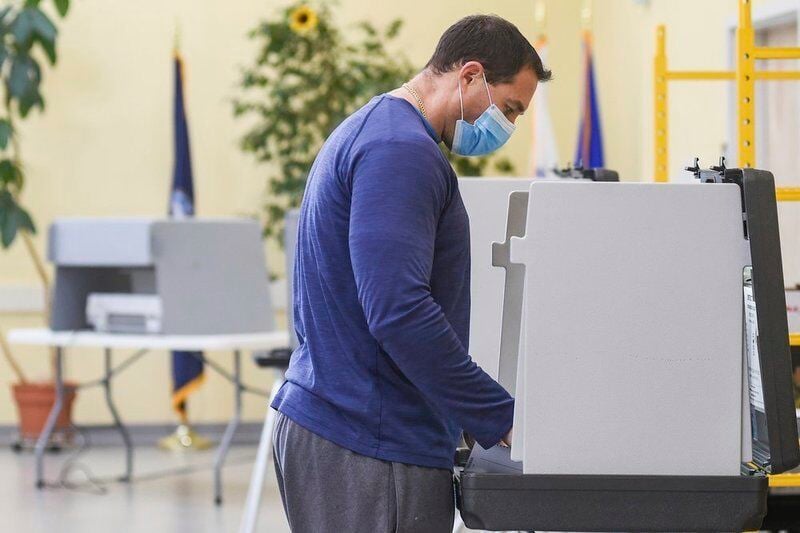 A man casts his vote at the Community Life Center during the 2020 elections in Salem. JAIME CAMPOS/Staff photo 11/2/2020

People cast their votes at Ward 3 at the Salem High School during the 2020 elections in Salem. JAIME CAMPOS/Staff photo 11/3/2020

An election staff member applies tape onto a sign at the Community Life Center during the 2020 elections in Salem. JAIME CAMPOS/Staff photo 11/2/2020

A man casts his vote at the Community Life Center during the 2020 elections in Salem. JAIME CAMPOS/Staff photo 11/2/2020

If there are any take-aways from talking to voters at the polls Tuesday, it’s that the slowly de-escalating election season has been as varied as those casting ballots.

“I think 2020 is different for so many reasons,” said Sally Kerans, a Danvers resident and Democratic candidate for state representative in the 13th Essex District. “We’re all on edge a little bit. There’s a seriousness. It’s always serious when you elect a president, but the national picture — COVID, all of the social distancing, all of the concern about what the president has done — has added a layer of anxiety to it.”

“He’s knocked down the unemployment rate. He’s bringing ships back — I work on ships, so I’m getting a lot of work,” Biggins said of Trump. “We’re getting more ships that are from California, to the Panama (Canal), and they’re working back and forth.”

Robert Poczobut, of Salem, cast a ballot for Trump as well, but not for the same reasons.

“Republicans are closer to my political philosophies,” Poczobut said. “I’m not a big fan of Trump personally, but I think the Republicans are doing better for the economy and country.”

Then there’s Peter Jewkes, a Beverly resident whose vote was decided by Mary Trump, the president’s niece and author of “Too Much and Never Enough: How My Family Created the World’s Most Dangerous Man.”

“I don’t have any beef with wanting to be conservative,” Jewkes said, “but Trump is just repulsive.”

Maria Ramos, a Salem resident, said she voted for Democrat Joe Biden for president because “we need change.”

“I’m trying to put it as nice as possible,” she said.

Similar to the presidential vote, responses to Question 2, on ranked choice voting, which if passed would change how elections in Massachusetts run going forward, were also varied. If approved, ballots going forward would rank candidates in order of preference. If no candidate in a race gets a majority of the votes, the last-place candidate is cut and all of their votes are re-cast using the second choice on those ballots.

“It seems like cheating to me,” Ramos said. “I voted no.”

“I voted yes,” said Karen Redden, a Salem resident. “I just thought it was... I don’t know, I just like the idea of your vote not going to waste.”

Some voted with the intention to reform the system, which ranked choice voting would do.

“I actually voted yes,” said Salem resident Kerri Altieri. “I feel like we need some changes in our voting system.”

Then again, some felt, if it isn’t broken, don’t fix it.

“I don’t have a problem with the way we vote currently,” Salem resident Tom Cahill said.

On that note, when discussing his vote for president, Cahill said he rejected everyone on the ballot. Defeated Democratic primary challenger Amy Klobuchar can thank him for a write-in nod.

“I don’t like either of the two candidates,” Cahill said. “She was the best candidate all along.”

Venice, FL - James V. Giarrusso Jr. (Jim), 88, of Venice, Fla., passed away on November 12, 2020. He was born April 1, 1932 to James and Caroline Giarrusso. As a Boston Native, he was graduate of Boston English High School and Boston Technical School. Jim retired from Stone and Webster Engin…

Salem, MA - Alex Arthur Filias, 98, formerly of Manchester By The Sea, Marblehead, and Church Street, Salem. He leaves his beloved wife of 48 years, Ruth (Davis) Filias. His life was defined by working in a family business, Dutch Bowl Restaurant, being a Seaman First Class during WWII, playi…