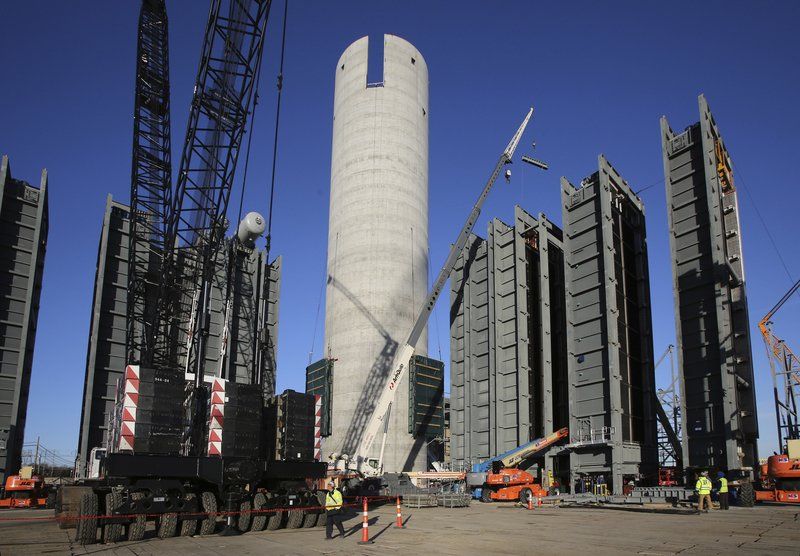 KEN YUSZKUS/Staff photoConstruction continues at the Footprint Power Plant in Salem as a daunting amount of steel now joins the concrete column, which has reached its maximum height. 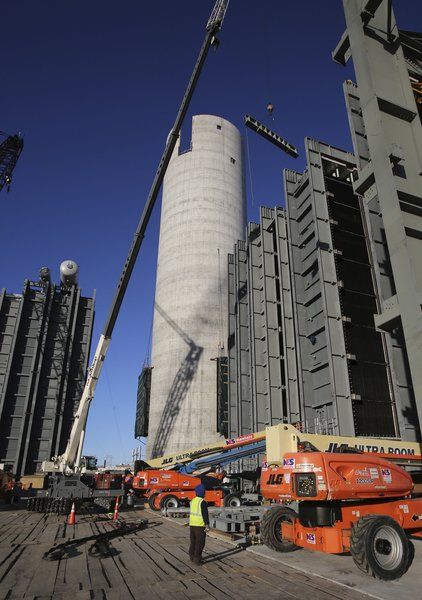 Construction continues at the Footprint Power Plant in Salem as a daunting amount of steel now joins the concrete column, which has reached its maximum height.

KEN YUSZKUS/Staff photoConstruction continues at the Footprint Power Plant in Salem as a daunting amount of steel now joins the concrete column, which has reached its maximum height.

Construction continues at the Footprint Power Plant in Salem as a daunting amount of steel now joins the concrete column, which has reached its maximum height.

SALEM — Construction at the natural gas-burning Footprint Power Plant is steadily blasting through milestones, and a big uptick in progress is expected soon.

This, and more, will be communicated to neighbors at an informational meeting held by the company on Wednesday, March 9.

The station is still on schedule to turn the power on next June, according to Scott Silverstein, president and chief operating officer of the company.

The past year has seen an aggressive schedule of work in two phases — construction of the building that will produce the power and the demolition of the coal-fired plant that it replaces.

Once the old plant's three smoke stacks were reduced to rubble last year, the plant itself started coming down. The company recently completed asbestos abatement inside for what is currently standing, according to Silverstein.

"Now you'll start to see more and more of that building coming down," he said. "We're seeing less and less of the old plant every day."

Steel for the new plant has also gone up. With some more to be erected in the coming weeks, the company is also gearing up to install two steam turbines over the coming month, according to Silverstein.

"Gas turbines and generators have been delivered to the site and are on the concrete pedestals to the buildings they'll be in permanently," Silverstein said. "[The steam turbines] will be coming over the next month or so. They'll be delivered by sea."

As the steel finishes going up for the plant and the exterior walls cover the plant's skeleton, the project will hit its next phase — one that doesn't show nearly as much progress, since it'll all be work indoors.

"We're getting close to that, and that's a good thing," Silverstein said. "It allows us to have more people in there doing work, and there will be less noise since it'll be enclosed."

The company will also be able to bulk up on shifts since construction won't be restricted to the glaring differences between day and night, he noted.

The next phase will also include building what would ultimately amount to the plant's circulatory and nervous systems — a daunting amount of pipe and wire.

"These go from very large pipes that a person could walk through down to very small, 2-inch pipes," Silverstein said. "A lot of that has to get connected and welded into place, then there's miles and miles of wires and cables connecting all of these different processes."

That will allow the company to add more shifts. But as that all plays out, there will still be exterior work chugging along.

"At the same time, you'll see some things going on outside — the air cooling condensers, very big radiator fans that sit 90 feet into the air," Silverstein said. "The legs of the units have almost all been installed, so they're sticking out of the ground closest to the water. They'll build each fan unit on the ground and lift it into place by crane."

Footprint representatives will be on hand to update neighbors on the project on Wednesday. The meeting is scheduled for 6:30 p.m. at the Bentley Academy Charter School auditorium.

"The meeting on Wednesday night is really just an opportunity to update the community and neighbors both on what we've already done," Silverstein said, "and give a little preview into the things coming down the pike for the rest of the construction."