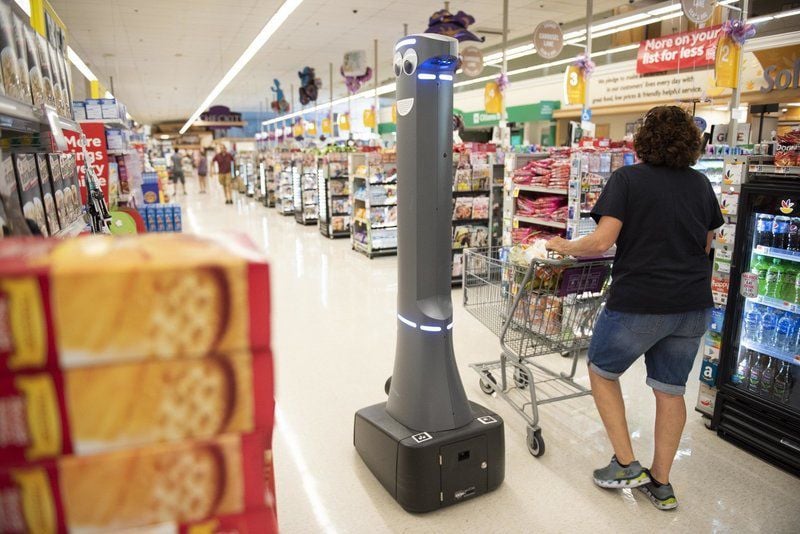 RYAN MCBRIDE/Staff photoA shopper walks past Marty, a robot working at Stop & Shop in Swampscott, detecting spills for employees to clean up. 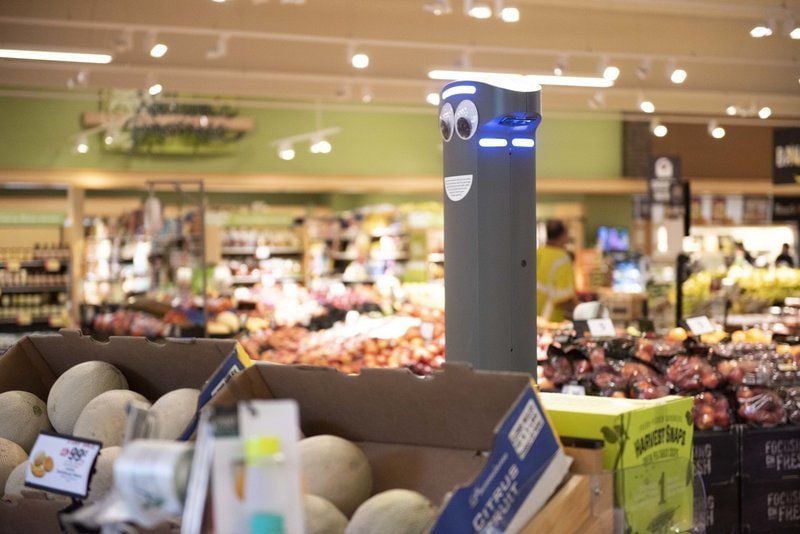 RYAN MCBRIDE/Staff photoMarty, the robot, keeps an eye on the floors at Stop & Shop in Swampscott. 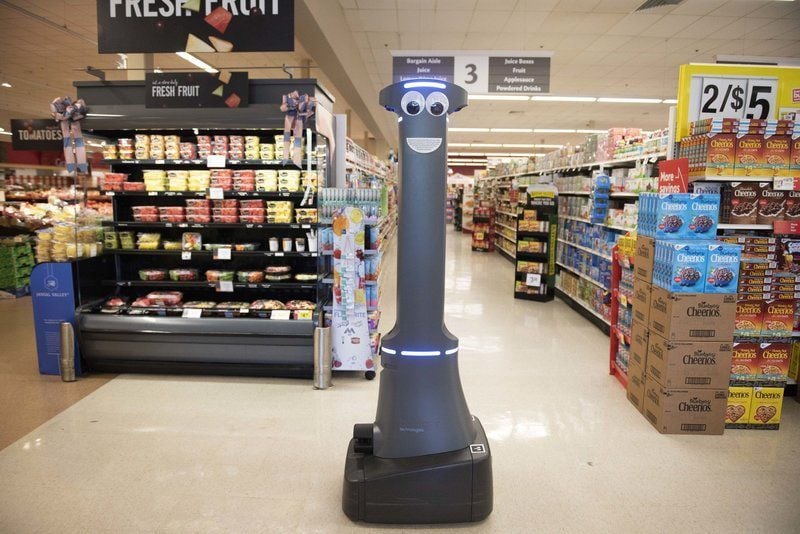 RYAN MCBRIDE/Staff photoMarty, the robot, was introduced at Stop & Shop stores, including Swampscott, in January. 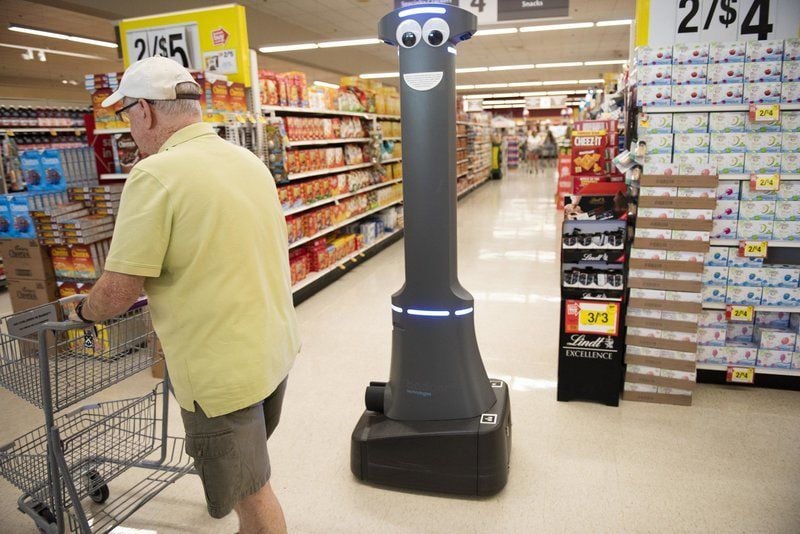 A shopper walks past Marty. Marty the robot moves around Stop & Shop in Swampscott, detecting spills for employees to clean up. RYAN MCBRIDE/Staff photo 8/2/19 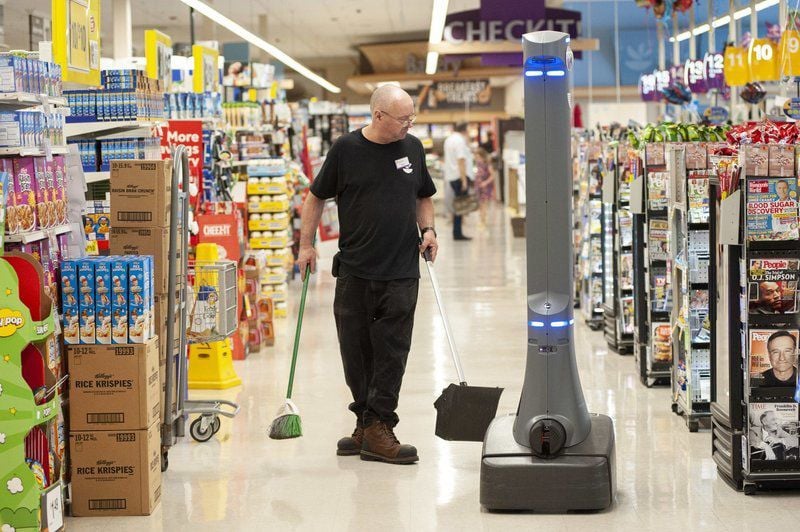 RYAN MCBRIDE/Staff photoA shopper walks past Marty, a robot working at Stop & Shop in Swampscott, detecting spills for employees to clean up.

RYAN MCBRIDE/Staff photoMarty, the robot, keeps an eye on the floors at Stop & Shop in Swampscott.

RYAN MCBRIDE/Staff photoMarty, the robot, was introduced at Stop & Shop stores, including Swampscott, in January.

A shopper walks past Marty. Marty the robot moves around Stop & Shop in Swampscott, detecting spills for employees to clean up. RYAN MCBRIDE/Staff photo 8/2/19

BEVERLY — Robots are cropping up in public on the North Shore, mowing lawns and calling for a cleanup in aisle 9.

While they are not taking over the world just yet, they are taking on more of the chores we may not like to do. In many cases they are also taking over the jobs we used to hold, causing concern for a significant portion of the workforce.

Since 2002, the Roomba robot vacuum by iRobot Corp. of Bedford has been cleaning rugs and floors in millions of homes.

Now, however, robots are slowly moving out of the home, noted robotics pioneer Helen Greiner of Beverly, a co-founder of iRobot in 1990.

"I am always thrilled to encounter a 'robot in the wild,' she said in a message. "When I saw one at my local Stop & Shop, I was thrilled. I took a photo and recognized it instantly as the Badger Technologies robot," she said.

This tall robot with googly eyes, bright blue lights and beeping sound is named Marty, and you can find him and others like him plying the aisles at Stop & Shop at 450 Paradise Road in Swampscott and other locations in the region. The robots were introduced in January.

"Marty has cameras in the bottom, and he is detecting any debris or spills about the size of a quarter or bigger," Ziner said. If Marty detects a spill, he'll stop, his lights will change from blue to green, and he will page for an associate to clean it up. Marty is bilingual, and it can make an announcement about a hazard detection in both English and Spanish. While it's equipped with cameras, they only scan the floor looking for spills and hazards. The images are stored for a short time on secure servers and then destroyed.

"He's made store associates and managers more aware," Ziner said of the robot. "He's going to page anyway, so you might as well get ahead of them.

"The idea is if the associates stay in front of it, Marty will page less," Ziner said.

One of the store's porters, Walter Schrader of Salem, said Marty provides its share of distractions, but "it's a good, basic design."

He suggests the robot would benefit from the ability to give it voice commands and having a vacuum so it could clean up spills.

That, however, may be left to a future generation.

"It's not like a Roomba," said Jennifer Brogan, director of external communications and community relations at Stop & Shop. "It does not actually clean up spills."

"We are very excited about the roll out," said Brogan, who said they began to appear in stores in January. She said 300 Stop & Shop stores will get Marty.

Another example of robots in the wild is the Husqvarna Automower, robotic lawnmowers that are now being sold in big box home improvement stores and locally by Maestranzi Brothers in Beverly.

It's an innovation welcomed by Bob Guelli of Rockport.

In mid-June, Maestranzi installed model 430XH at his home, with its sloping lawn, "and I haven't cut the grass since."

"It goes out quite frequently and it cuts a little bit at a time," said Guelli, who said his property is challenging. He said he is modifying it so "Buzz," as he calls it, does not get stuck, which it has a few times.

The robot stays in his yard, its ambit limited by a wire buried just under the surface around the perimeter, much like the boundary wires used in dog fencing. The yard also has buried guide wires to help the robot find its recharging dock once its batteries get low. It is controlled through a phone app.

Guelli said his lawn stays trim, which is great, though there is no more smell of cut grass.

"It's working as advertised," he said.

To demonstrate its abilities, Maestranzi has one constantly maintaining the lawn in front of its Dunham Road property.

Maestranzi's general manager, Jon Cahill, said the technology is actually about 20 years old and while the machines are popular in Europe, the company is just starting to roll them out in the United States. The automowers come with an anti-theft device and it works in the rain.

It cuts the grass using three small, spinning blades about the size of a pack of chewing gum.

"One of the really neat things about this machine is it only clips off a little bit off the top of the grass so it's always mulching. It's better for your lawn," Cahill said.

The mower knows where it has cut and it is able to learn your property, Cahill said. While they sell a commercial automower, the main customers for them have been couples who have grown tired of mowing their lawn.

CyPhy Works in Danvers, also founded by Greiner, was a pioneer in tethered drones that can fly for hours, weeks and days at a time without the aid of humans while sending back information. Such technology can be used to monitor events like the the Boston Marathon.

CyPhy Works has undergone changes, as its team has launched Aria Insights of Danvers. Aria aims to expand CyPhy's tethered drones with the use of artificial intelligence and machine learning software. In a sense, they are creating smart drones that can both collect and analyze data.

This new drone technology could help identify repairs inside an oil tanker or pipeline, where it's dangerous for humans to go, or monitor natural disasters, or large crowds. A company official could not be reached for further comment.

Will robots take your job?

With advances in robotics and artificial intelligence comes the question of what happens to the people who were doing the jobs robots are handling know.

A report released by the Washington, D.C.-based think tank The Brookings Institution earlier this year suggests a quarter of American jobs could be "disrupted" as the pace of automation accelerates.

According to the report roughly 36 million Americans hold jobs with “high exposure” to automation — meaning at least 70 percent of their tasks could soon be performed by machines using current technology. Among those most likely to be affected are cooks, waiters and others in food services; short-haul truck drivers; and clerical office workers.

“That population is going to need to upskill, reskill or change jobs fast,” Mark Muro, a senior fellow at Brookings and lead author of the report, told The Associated Press.

Muro said the timeline for the changes could be “a few years or it could be two decades.” But it’s likely that automation will happen more swiftly during the next economic downturn. Businesses are typically eager to implement cost-cutting technology as they lay off workers.

Many economists find that automation has an overall positive effect on the labor market, said Matias Cortes, an assistant professor at York University in Toronto who was not involved with the Brookings report. It can create economic growth, reduce prices and increase demand while also creating new jobs that make up for those that disappear.

Since leaving CyPhy Works as its CEO in 2016, Greiner has been sworn in as a highly qualified expert for robotics, autonomous systems and artificial intelligence for the Army.

She remains positive for how robots' will interact with us in the near future.

"I believe this is just the beginning for robots: robotic homes will take care of the people in them, cars will be self-driving robots, and your deliveries will be just click away enabled by delivery drones."

Staff writer Ethan Forman can be reached at 978-338-2673, by email at eforman@salemnews.com or on Twitter at @TannerSalemNews. Material from The Associated Press was used in this report.