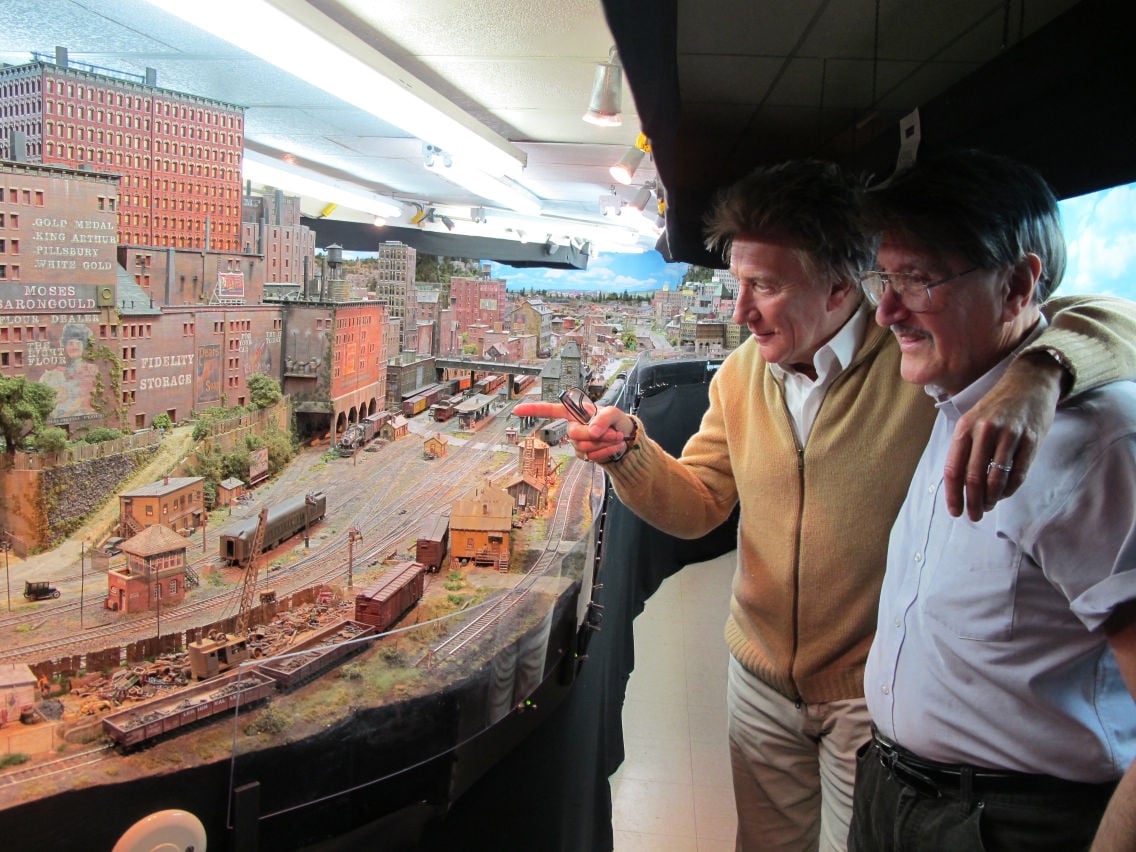 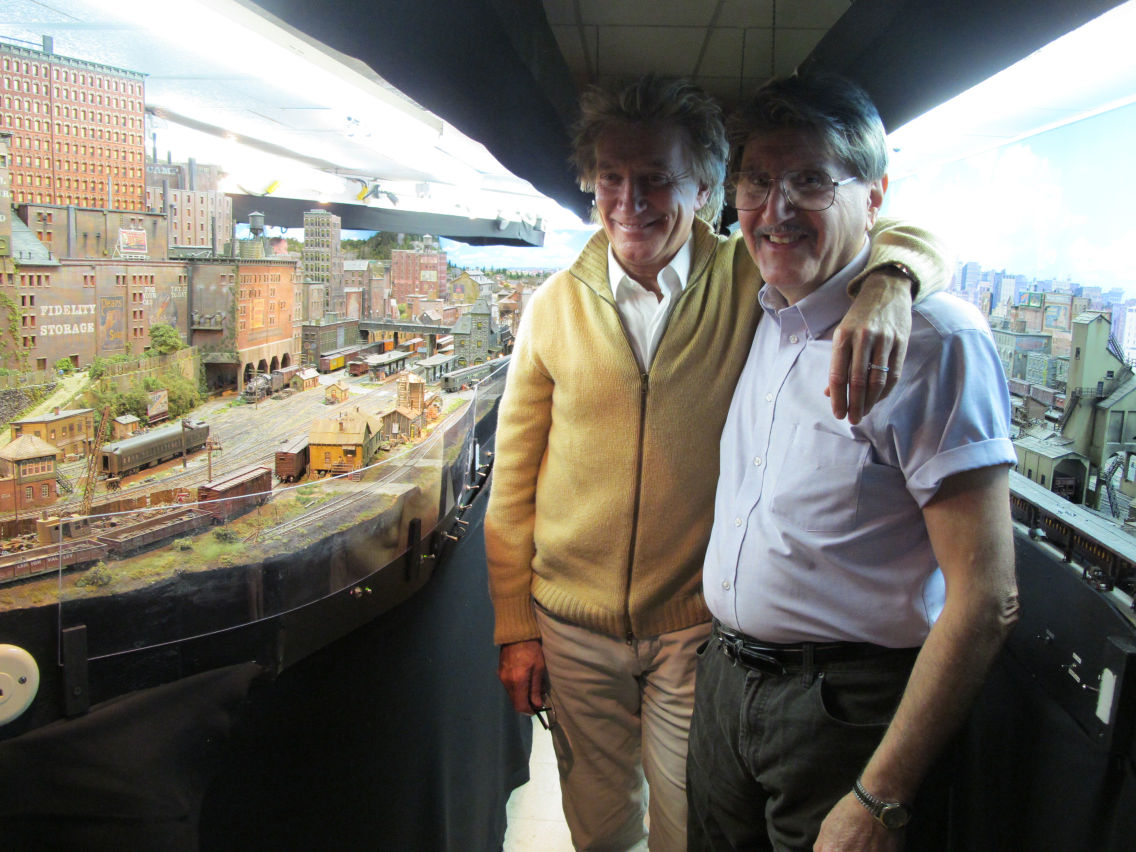 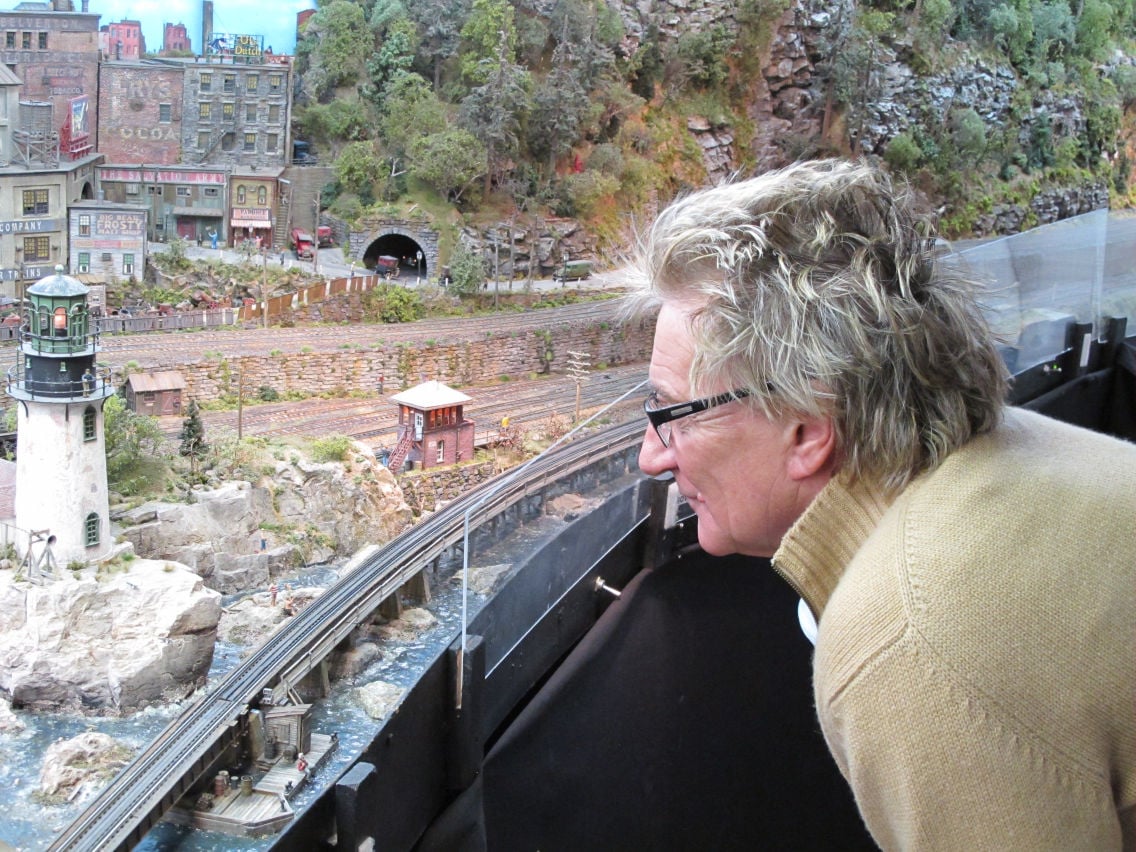 PEABODY — It was a meeting of two great artists.

And when model train buff and singer Rod Stewart visited George Sellios’ model train layout on Main Street in Peabody, the star was so entranced by what he saw his entourage had to pull him out of the room. “He had a concert in Boston,” Sellios laughs. “He was supposed to be there in 45 minutes. It got to be a half hour. ... He said he’s been trying to get here for years.”

Sellios’ Franklin and South Manchester Railroad, located on Main Street in downtown Peabody, has always drawn serious model train enthusiasts from all over the world. But Stewart might be the biggest name ever. “He’s such a down-to-earth guy,” said Sellios of his visit.

Passing the hair salon downstairs, Stewart was noticed and he drew a number of ladies after him. He graciously posed for pictures with them. “Everyone had to take a picture with him,” Sellios said.

The rock star explained that he has his own massive model railroad in California — “It’s 125 feet long,” said Sellios — but the British native half-joked that this project left him so awed, “I’m going to rip mine all down after this.”

The Sellios display covers up to 1,600 square feet and is crammed with incredible detail, from grimy buildings to potholed streets. In delicate HO scale it’s an uncanny depiction of a Depression-era city that tends to resemble Peabody.

“It was kind of surreal,” commented Sellios’ friend Ben Streeter of Andover, who was invited to meet Stewart. “He clearly had researched George’s layout.” Accompanied by his model daughter Ruby, Stewart had certain angles and sections of the work that he wanted to view closely. “He said it would inspire him to go home and work on his own layout,” Streeter said. “... He was amazed. Like anyone who sees George’s layout for the first time.” The visit lasted an hour.

Notwithstanding his self-deprecating style, Stewart has had his own work featured in model train magazines. Streeter noted, “He has a huge model of Grand Central Station. ... He does his modeling while he’s on the road.” At age 68, said Streeter, “He looks great. His hair was just as crazy as ever.”

For his part, Stewart owns several of the painstakingly fashioned buildings that Sellios sells at high prices through his Fine Scale Miniatures. “He kept hugging me,” Sellios laughed.

Both Sellios and his daughter Tara, who was also there for the Stewart’s visit, were given tickets and attended the singer’s Boston concert. “It was real entertainment,” said Sellios.