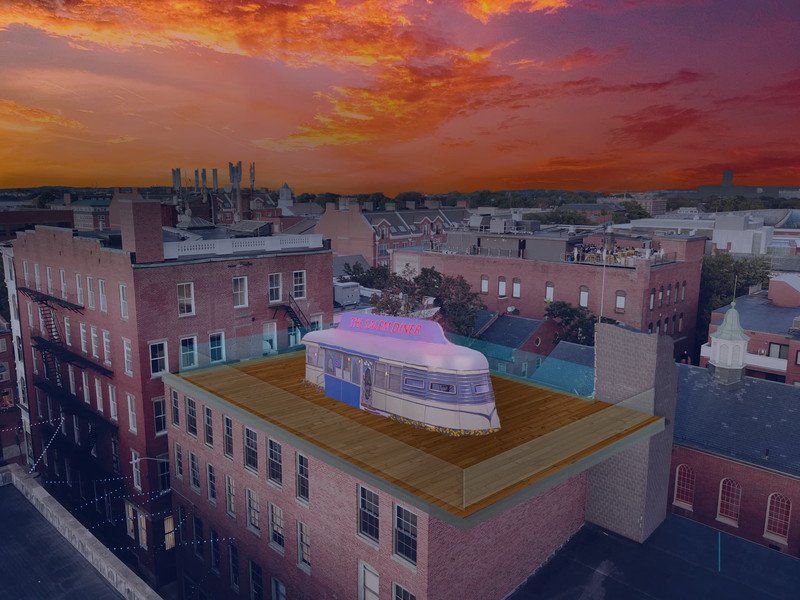 A team of owners tied to 10 Derby Square, including the popular Salem pop-up Goodnight Fatty, were the lone bidders to save and relocate Salem Diner off of Loring Avenue. Their plan? Put it on top of the building they're in. 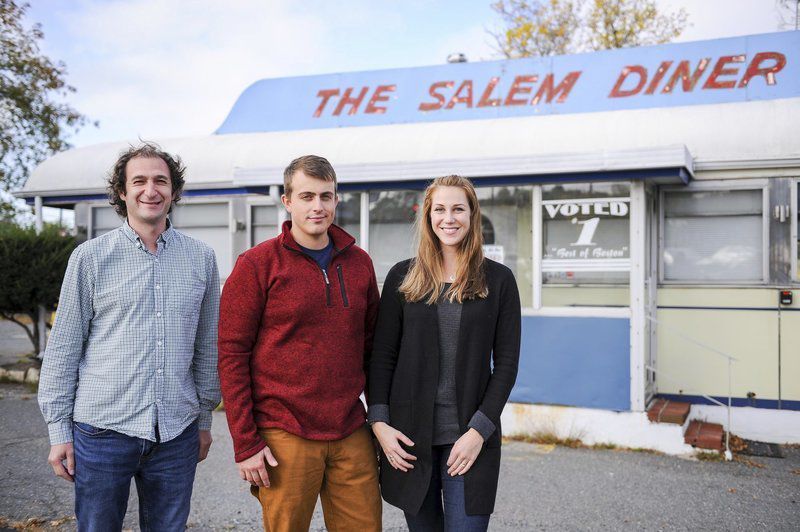 From left, Michael Sperling of Sperling Interactive, and Erik and Jennifer Sayce of Goodnight Fatty are part of a partnership team that plans on relocating the Salem Diner from Loring Avenue to the roof of 10 Derby Square in downtown Salem.

A team of owners tied to 10 Derby Square, including the popular Salem pop-up Goodnight Fatty, were the lone bidders to save and relocate Salem Diner off of Loring Avenue. Their plan? Put it on top of the building they're in.

From left, Michael Sperling of Sperling Interactive, and Erik and Jennifer Sayce of Goodnight Fatty are part of a partnership team that plans on relocating the Salem Diner from Loring Avenue to the roof of 10 Derby Square in downtown Salem.

SALEM — Things are looking up for the Salem Diner.

The couple behind late-night cookie pop-up Goodnight Fatty are among a partnership group that plans to buy the now closed historic diner and move it from Loring Avenue to 10 Derby Square — on the roof.

The group — Goodnight Fatty owners Erik and Jennifer Sayce, Michael Sperling of Sperling Interactive, and Kevin McCullough and Robert Mazow of the law firm Mazow McCullough PC — was the only bidder to respond to Salem State University's request for proposals to purchase and relocate the diner. They plan to buy the diner for $1,001, move it and eventually open it as a rooftop restaurant in which the chef and menu change every six months.

"The restaurant community is super tight here in town," said Erik Sayce. "So when the diner bid came online, a lot of chatter started going around town — and it became clear that land cost is the number one issue with keeping (the diner) in Salem."

When property costs kept the group from finding a lot in Salem, Sperling came up with the idea to move the 16-by-38-foot diner to the roof.

According to the plan, the diner seats 49 people. In warmer weather, a roof deck will open, bringing the total capacity to 150.

Each partner has a stake in 10 Derby Square that houses offices and one residential condominium. Sperling owns two units while McCullough and Mazow own the top floor and control the roof rights. The building is also where Goodnight Fatty opened its first pop-up location before expanding to the Andrew-Safford Carriage House by Salem Common earlier this year.

Now experienced entrepreneurs, Erik and Jennifer Sayce want to use the diner to help fledgling restaurateurs who have a business plan but don't have anywhere to test it.

"A big goal of ours is to help incubate somebody else and see their idea through, and help them break through that barrier of entry we've experienced," Erik Sayce said.

Under the plan, prospective restaurants would pitch ideas to the diner's owners. Every six months, Erik Sayce said, a new venture will run the restaurant. The diner's atmosphere will stay the same — the Red Sox memorabilia isn't coming down — but the menu will change, Jennifer Sayce said.

'A strong hill to climb'

Still, plans are preliminary. On top of permitting and other regulations, the group estimates the move will cost around $600,000. That includes $100,000 for the relocation, $150,000 to build the deck and another $150,000 to expand the building's elevator to the roof.

If all goes as planned, work at Derby Square would start in February. The diner would move in April or May and would reopen in June 2020.

It remains unclear what factor zoning will play. But Mayor Kim Driscoll said the building is in the city's most flexible zoning district.

"Roof decks in Salem are something of interest," she said. "Hotel Salem has had the first one, and there's definitely a lot of curiosity — and with summer in New England, trying to use those spaces in a way that enables people to enjoy themselves is something special."

Driscoll said the plan is "definitely a little unexpected."

"We're at the beginning of a process, and there's a lot of due diligence — relocating a diner, and then relocating it to the top of a building," she said. "But the individuals involved have done some innovative things in Salem, so they deserve the chance to run it up the flagpole."

One of the last two Sterling Streamliner cars in the state, the Salem Diner opened in 1941 and is on the National Register of Historic Places. Salem State bought the diner in 2013, mostly for the land it sits on. University officials want to buy the neighboring Loring Liquors building, then unite the parcels and build on them once they're vacant.

In the meantime, the university reopened the diner and hired a vendor to operate it. The diner closed this spring in a redesign of the university's dining options. In June, Salem State began seeking plans for buying and relocating the diner, with priority going to ones that kept the diner in Salem.

Once the diner is gone, Salem State plans to turn the site into a parking lot as long-term plans come together, said Rita Colucci, the university's legal counsel.

Top 10 most popular stories for 2019 on salemnews.com

Here are the top 10 most viewed stories for 2019 on salemnews.com.