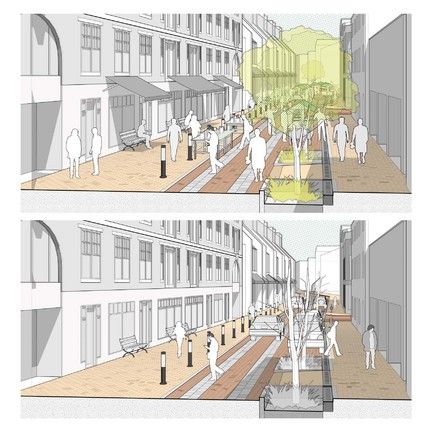 The two options Salem is considering for the Essex Street pedestrian mall. In both scenarios, the mall would be open only to pedestrians during the peak tourist season; traffic would be allowed during the quieter winter months. 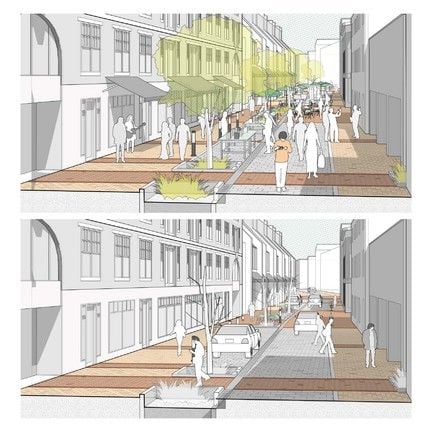 The two options Salem is considering for the Essex Street pedestrian mall. In both scenarios, the mall would be open only to pedestrians during the peak tourist season; traffic would be allowed during the quieter winter months.

SALEM — The future of the Essex Street pedestrian mall was last night imagined in two scenarios that both introduced car traffic and parking to the brick-and-cobblestone corridor that stretches from Washington Street to the Peabody Essex Museum.

Cars would travel one way toward the museum, and parallel parking would be available on one side of the street. But they would not be permanent fixtures, architect Tim Love stressed, as the city would have the option to close the road to traffic during more pedestrian-friendly times of day and year.

At two prior meetings, the "shared model" suggested in the proposed scenarios was embraced, primarily by business and property owners who see foot traffic on the mall replaced by desolation in the winter. Last night, during a third city-organized session to discuss the mall, there was more vocal resistance to opening it to cars.

"Keep the mall a pedestrian mall," said George Medeiros of Church Street. "It is an asset to the city of Salem." He argued the mall should be better marketed to attract shoppers.

Dave Williams of Essex Street said the one car traveling the mall in the two proposed options depicted an "ideal" and unlikely circumstance.

"It would probably be a line of traffic," Williams said.

The mall was closed to traffic in 1976. Since then, only pedestrians and delivery trucks have had access to it.

The space is deteriorating. People complain that the cobblestones are not walkable and that the placement of street furniture and landscaping is haphazard and, in some cases, an impediment to potential customers trying to get to some stores.

Mayor Kim Driscoll, with The Salem Partnership and the Peabody Essex Museum, has invited businesses and residents to discuss what should be done with the mall. The city and museum are splitting the $34,669 cost of the planning sessions, which include the services of Love.

Nelson Valverde, owner of the recently opened Cafe Valverde on Essex Street, said businesses needed some car traffic and the exposure it offers.

"If you look around now, it's dead," he said. "We need to bring life. We need to make it lively."

Tom Tetrault, owner of Bernard's Jewelers, said he didn't want a grandiose plan for the mall to overshadow the near-term improvements that have to be made to its physical landscape.

Driscoll acknowledged that the city does not have money to implement whatever changes people want for the mall, though Salem has applied for a grant from the National Endowment for the arts.

Going into the mall discussions, Driscoll didn't want the polarizing choice — should it be opened up to traffic or should it stay closed? — that has historically driven debate about the mall.

"This issue is so much greater than open or close it," she said last night. "It's about how do we create a space that we can all love?"

The consensus after two meetings seemed to be on some version of a shared model. That sentiment wasn't as strong last night.

"I don't know where this is going," Driscoll said.

There is one meeting left on April 12 in the Salem Five Community Room. The goal will not be to select one of the two options presented, the mayor said, but to see if the broader concept expressed in them has enough support to pursue.