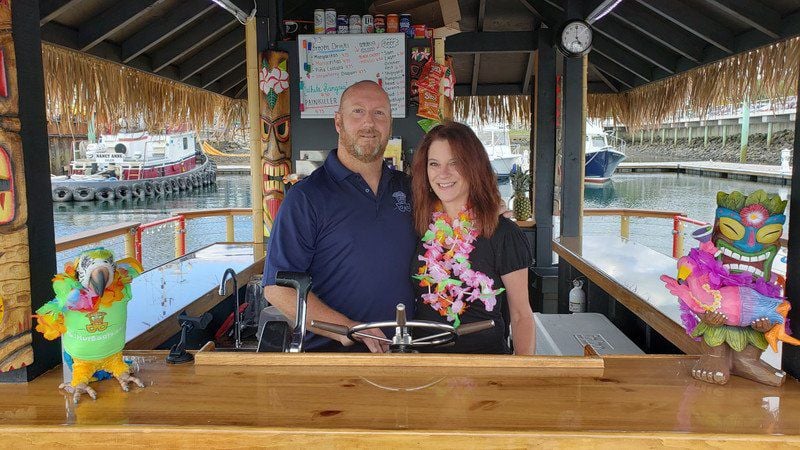 DUSTIN LUCA/Staff photoKaren and Scott Paszkowski, Peabody natives, behind the bar of their vessel Tiki Time. 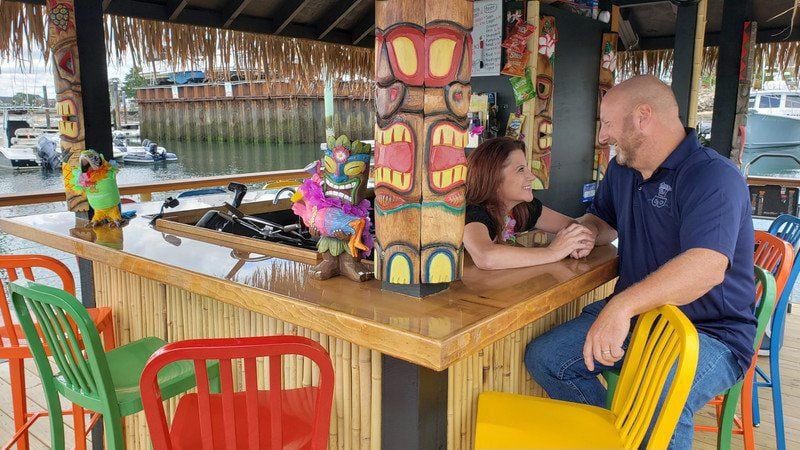 The boat goes on 90-minute cruises around Salem Harbor, complete with specialty cocktails from the bar and other drinks. 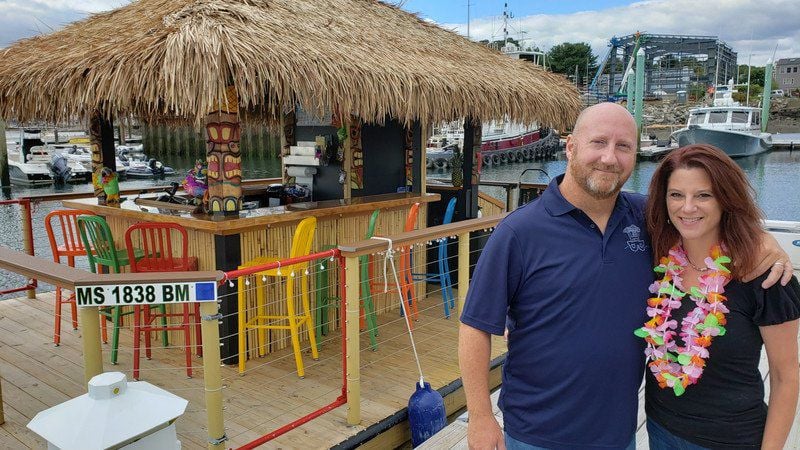 DUSTIN LUCA/Staff photoKaren and Scott Paszkowski, Peabody natives, behind the bar of their vessel Tiki Time.

The boat goes on 90-minute cruises around Salem Harbor, complete with specialty cocktails from the bar and other drinks.

The vessel, which docks off Blaney Wharf and is hard to miss out on the water, plays Caribbean music, seats six for 90-minute cruises and maintains the aforementioned clock. And, of course, the tiki bar.

Tiki Time is a new tiki hut-styled boat equipped with a motor, bathroom and the route around Salem Harbor, which is weather-dependent. Its maiden voyage was a little over a week ago by Peabody natives Karen LaBelle-Paszkowski and Scott Paszkowski, after months of planning and design.

The vessel brings up to six guests at a time around the harbor, and serves specialty cocktails and other drinks, as well as light snacks. Tickets cost $30 per passenger, and cruises can be booked through TikiHutBoats.com.

After three days, the vessel had already completed 14 cruises.

“We’re three days in, and we’ve luckily had great weather since launch,” said Scott Paszkowski, looking out on the water, during an interview last week. “Today, we have a northwesterly breeze, so if I stick closer to the shoreline, it’ll be warmer for the people and less affected by wind. Every day, the course will be different depending on the weather.”

Karen LaBelle-Paszkowski, who graduated with Scott from Peabody High in 1987 and married him three years ago, said she remembers when the idea was born.

“I saw a picture of a tiki boat on the water with people,” Scott added, smirking. “I thought it was pretty cool. ... I looked at what they did and the kinds of boats, and I went from there.”

“I’ve been into boats my whole life,” he said. “My dad was a commercial lobsterman, so ever since I was a baby, I’ve been out here.”

The design of the boat is pretty straight-forward. It’s built like a dock, with barrels full of air trapped by lumber built in the shape of a platform. A counter and bar stool-like chairs sit under a roof lined with LED lighting and palm grass thatching.

“These are commercial docks,” Scott Paszkowski said, referring to the area around Blaney Wharf. “So I went to the company that makes these docks and bought the hardware. This is made with all the commercial hardware they use in the industry.”

A small propeller engine controls the direction of the platform and moves it on relatively low power.

“We stay in the 5-miles-an-hour zone of Salem Harbor,” he said. “We don’t go outside of Salem Harbor at all, so it’s a calm ride. We don’t want people rocking and rolling.”

The vessel was built with the help of Rob Montminy, of Salem-based Montminy Construction.

The target audience for the tiki bar on the water focuses on tourists coming to Salem and looking for things to add to their already planned experience, Scott Paszkowski said.

“This is why we do a 90-minute tour,” he said. “A lot of tours are four hours, where you rent it for half the day. But we figured with all the things in Salem that people can see, they don’t want to eat up half of their day.”

It also isn’t much of a “tour” as traditional tours go. There’s no narration or stories told about landmarks out on the water. The focus here, instead, is 90 minutes of relaxation, Karen LaBelle-Paszkowski explained.

“It has been really interesting lately,” she said, pointing to the 10 or so chairs around the counter. “People will come on in different groups, sit here, here or there, and by the end of the 90 minutes, people are hugging, taking group pictures. They have smiles and are forgetting everything out there for a while.”

“What you see is groups that go out to socialize together. They get to go out on the harbor, have a drink,” McHugh said. “It’s more or less to let people relax, take in the sights of Salem Harbor and socialize. It’s different.”

The vessel serves alcohol through a state “shipmaster” license, which limits the number of people aboard to eight — the owners and six patrons — and where they can pour liquor. As such, alcoholic drinks can’t be served while the vessel is docked in Salem unless it’s within 15 minutes of departure.

“We can’t go and tie up somewhere else,” Karen LaBelle-Paszkowski explained. “We have to be moving.”

McHugh said he welcomed the proposal for Tiki Time because the couple “was so outgoing with (their) plan and really paid attention to detail.”

“I don’t think (they’re) going to detract from other water-borne attractions,” McHugh said. “This is one of a kind.”