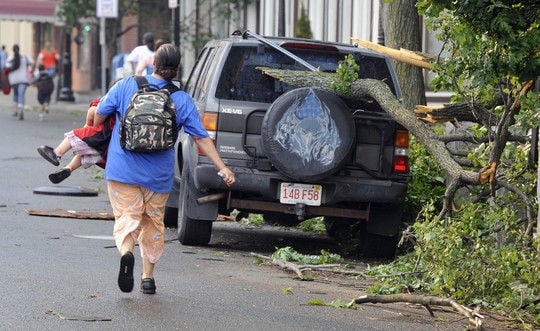 A woman runs with her child to safety after a report of a second possible tornado in Springfield last night. One tornado had already struck the downtown, scattering debris, toppling trees, and frightening workers and residents. 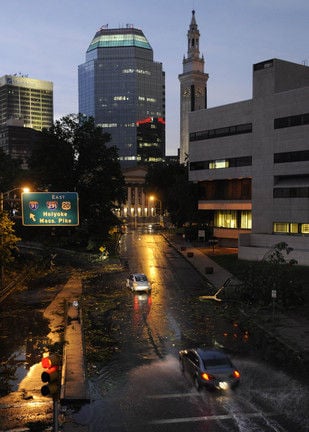 Cars navigate around debris and through water after a reported tornado in downtown Springfield.

A woman runs with her child to safety after a report of a second possible tornado in Springfield last night. One tornado had already struck the downtown, scattering debris, toppling trees, and frightening workers and residents.

Cars navigate around debris and through water after a reported tornado in downtown Springfield.

SALEM — The Salem High School senior class went looking for thrills at Six Flags amusement park in Agawam yesterday and got near terror on the return trip as they rode into the teeth of the state's own tornado alley.

"From a near-perfect day (and) blue skies," senior Brad Skeffington said, "we were driving into what seemed like blackness."

Four people have been listed as killed so far as a result of two tornadoes that struck western Massachusetts and the Springfield area (including Agawam) yesterday. The less powerful tornado ripped through West Springfield and on toward Sturbridge, threatening the route back to Salem.

The impact was enough that Gov. Deval Patrick declared an emergency and called up 1,000 National Guardsmen. Meanwhile, the stormy conditions reached the coast last evening but seemed centered on the South Shore.

The buses that took many of the Salem High students on their senior class trip returned early through what was already a bleak landscape of torn buildings and broken windows. Skeffington described ominously swirling black clouds and surges of driving rain.

At one point, said Superintendent William Cameron Jr. — who was back in Salem getting reports — the buses were forced to pull over for roughly two hours in the face of the violent weather. That resulted in some terrifying moments on the buses.

"Everyone was pretty scared," Skeffington said. "We kind of freaked out."

And as bad as it was for the kids on the buses, it was worse for senior Kelsey Day, driving her own car with three friends many minutes ahead of her classmates.

"We were in the middle of the tornado," she said, estimating her position as the town of Auburn when a terrifying funnel cloud formed over their heads. Thankfully, it never touched down. Instead, came sheets of lightning with clocklike regularity. "The biggest lightning bolts we'd ever seen. "

Quarter-sized pieces of hail pelted the car, at one point cracking the windshield.

Day could barely see in front of her. "We were all screaming in the car and crying and calling our parents." She also showed the presence to call friends on the bus behind them and warn that they were driving right into the worst of the storm.

"I told them they should pull over."

She drove her car off the turnpike and sought shelter along with a crowd of other people in a McDonald's near Worcester. The car no longer felt secure.

It had been a terrific day up until the storm required everyone to leave the park early, around 6 p.m., Day said. "We had a lot of fun. We didn't know anything about a tornado until they started shutting down everything."

The scares of Six Flags' massive coaster rides were nothing compared to what followed. During the worst of it, "We were saying we'd rather be stuck on the roller coaster than in that storm."

When the school buses finally rolled through the Worcester area, Skeffington was stunned to pass a massive tree 7 feet in diameter and split right down the middle.

"It was a long day," he said, adding gratefully that no one was hurt.

"I'm sure it was exciting," mused Cameron, suggesting that it was a class trip no one would ever forget.

"What's an amusement park," he asked, "compared to a tornado?"