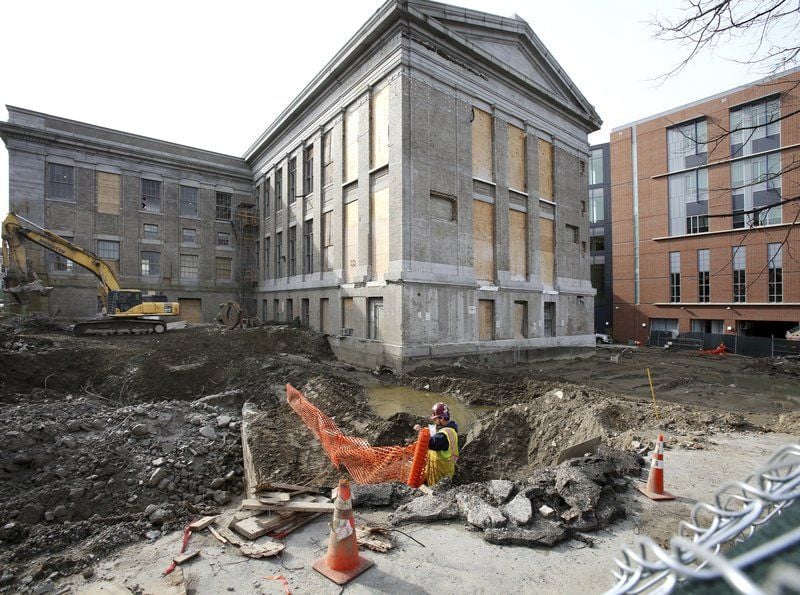 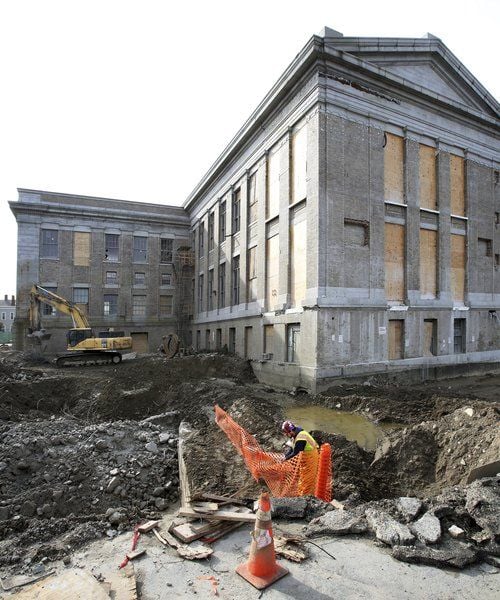 SALEM — It really didn’t that last long, at least in the grand scheme of things.

The concrete-and-glass building added to the Bridge Street side of the Family and Probate Court in 1979 has been demolished as part of the $57.6 million project to renovate the site.

That leaves the probate court looking much the way it did when erected in 1909, but not for long. Holes were dug recently to accommodate the piles for the foundation of the new addition, most of which will be located within the old addition’s footprint.

That building, which will host new judges’ lobbies, a courtroom and operational space, will actually be significantly smaller than the old one. But it will use space better than the old modernist addition and fit better with the probate court building’s neoclassical style, according to updates the state has posted online.

While the old addition extended off the back side of the court at an angle and had rounded or moderate corners, the new one will be boxlike and located squarely against the back of the court.

People should start to see the new addition forming over the course of this autumn and winter, beginning with concrete pouring and erection of steel framework, said Meghan Kelly, a spokeswoman for the state’s Division of Capital Asset Management and Maintenance.

If all goes as planned — and it has so far — the project will be complete by spring 2017, she said.

In the meantime, Kelly said workers have made a discovery — a time capsule hidden behind a slate date stone in the old addition’s basement that nobody even knew to look for.

“There was no documentation,” Kelly said. “It’s not all that big. It was in a copper container.”

The time capsule contained eight newspapers, $2.49 in various denominations, a contract, an Essex County annual report, political pamphlets and other items of the era. While Kelly said the discovery emphasized the addition’s relative newness, project supervisors will nonetheless consult with the Massachusetts Historical Commission about what to do with it.

“The time capsule was only from 1980, so it wasn’t really that old, but it was still kind of a cool thing,” Kelly said, adding that it’s possible the item will be installed in the new addition.

As work on the addition continues, the probate court itself is being overhauled; entire sections of it have already been gutted. The work includes building three new courtrooms and renovating a fourth — Courtroom 1 — that has special historical significance.

Other work will focus on restoration — of the elevator, marble staircase and marble and plaster work in the lobby, as well as the facade, Kelly said. Other priorities include making the court more energy-efficient; historic windows will be replaced by newer models of the same size and style.

Work on the courthouse started off with removal of hazardous materials, a delicate process that was done under containment, meaning polyethylene sheeting was put up over the windows and to divide rooms to prevent dust from going airborne outside. After removal, the materials were placed into sealed plastic receptacles and spirited away.

Similar work was done in the addition prior to its demolition, with large plastic receptacles containing the hazardous materials removed from the building via excavator arm.

Some components of both buildings were saved for recycling.

The work is one of three large-scale courts project across the state being funded by capital bonds, the other two being a $60 million trial court in Greenfield and a $175 million judicial center in Lowell.

All of the Salem court’s functions and offices have been relocated to Shetland Park business center for the duration of the work.

More information, including updates, can be found by going to www.mass.gov and searching for “Salem probate court.”

Neil H. Dempsey can be reached at ndempsey@salemnews.com or via Twitter at @neilhdempsey.

COURT PROJECT, BY THE NUMBERS

INSIDE THE TIME CAPSULE

Although the time capsule that workers recently found in the Probate Court addition dated only to 1980, its contents, nonetheless, offered a glimpse of the change that has visited numerous institutions in the years since. Here’s what they found inside.