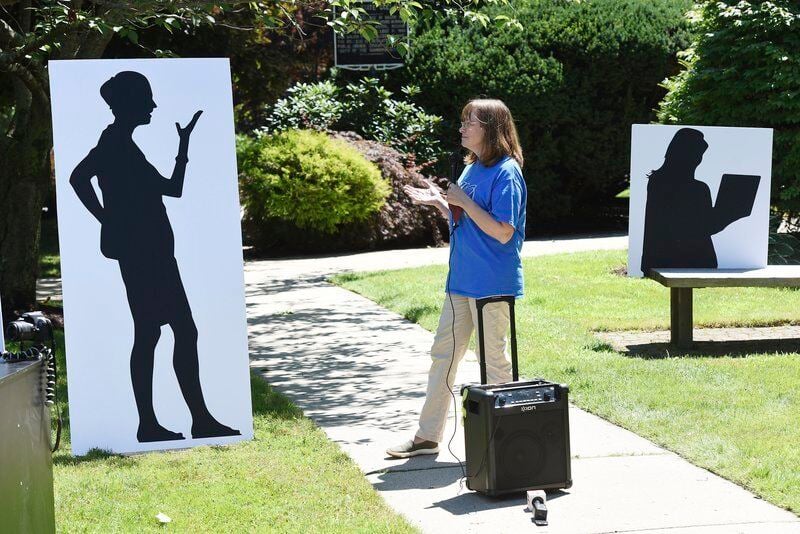 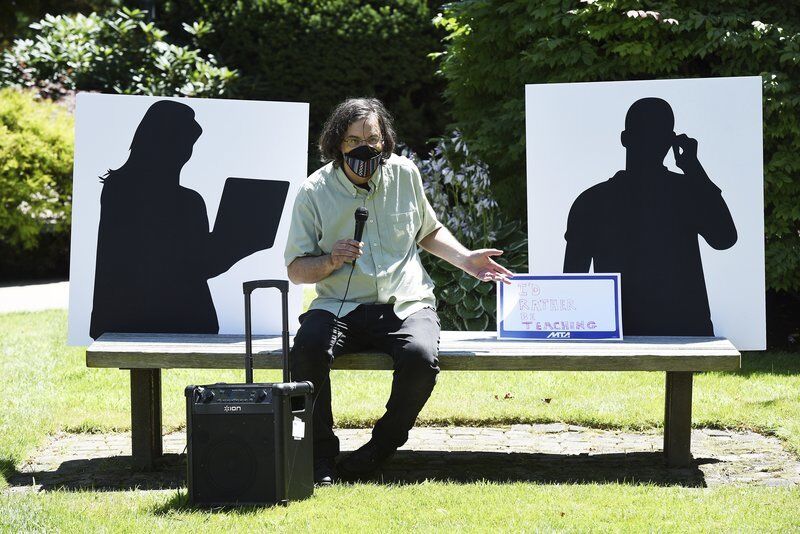 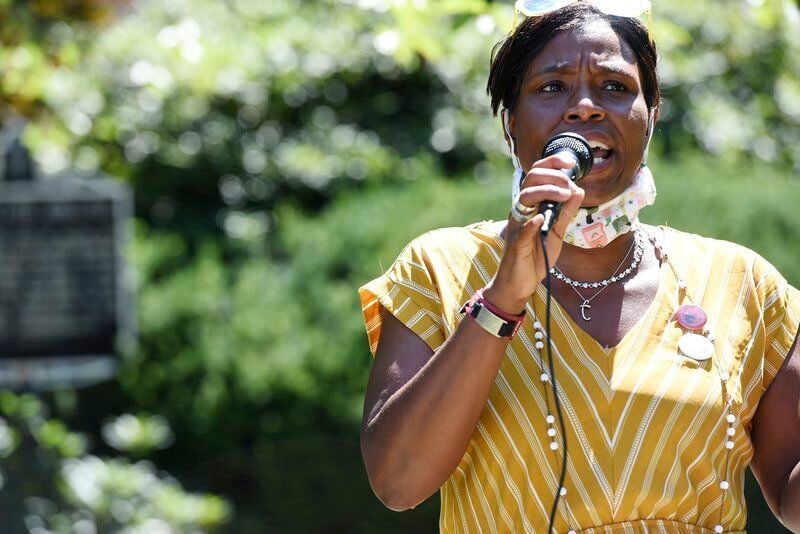 SALEM — Standing near the corner of Lafayette Street and Loring Avenue Friday afternoon, Salem State University psychology professor Joanna Gonsalves asked the silhouette of a colleague about funding cuts and how to navigate them.

"Wouldn't it be great if we can reduce them? Can you help me?" Gonsalves said, leaning into the silhouette and holding a microphone toward it for a few seconds of silence. "I guess she's on furlough and won't get back to me for the next few weeks."

Gonsalves and other members of Salem State's chapter of the Massachusetts State College Association gathered Friday at the prominent street corner to protest a plan that would require all university employees to take five weeks of furlough in order to balance the budget.

Salem State President John Keenan announced the furloughs at the end of June as a necessary effort to close an $8.5 million budget gap caused by the coronavirus pandemic.

The MSCA, which represents 313 faculty members and librarians at Salem State, rejected the furlough plan last month. In a letter to members, MSCA president C.J. O'Donnell said the proposal "is not necessary, is ill-advised and would do long-term damage for a short-term budget crisis."

On Friday, no more than a couple dozen members of Salem State's MSCA chapter participated in the socially distanced protest. Several performed skits with a battery-powered amplifier, where they depicted struggles that students and faculty will face with widespread furloughs.

Protesters said the real problem isn't the furloughs, but state and federal funding cuts to public higher education. Those cuts over time, they said, ultimately led to furloughs being considered as a solution to a budget shortfall.

Max Paige, vice president of the Massachusetts Teachers Association, described Salem State as "an engine of personal opportunity for our many students that go here. It's through this way that so many students move up in social class, choosing their own careers, direction."

Two of Salem State's union chapters, the American Federation of State, County & Municipal Employees and the Association of Professional Administrators, have negotiated with the university and agreed to take four weeks of furlough. Keenan said the MSCA has declined to negotiate so far.

"This is a reasonable conversation to have, to make sure we didn't have to lay off some 60, 70, 80 of our team at Salem State, to make sure we can provide the best program for our students on campus. And that's what we intend to do," Keenan said. "But to not be willing to sit down and talk about it seems absurd to me."

For the union, however, the goal is to avoid furloughs completely. Gonsalves, the MSCA chapter's vice president, said professors only work nine months out of the year, so the four weeks of furlough other unions are taking would take away time professors spend preparing for the semester and helping students.

"What we don't want to see is that we get through a pandemic and reduce the overall quality of Salem State for our students," Gonsalves said. "We've asked our leadership to use their reserves. This is the rainy day — don't furlough or make cuts and layoffs to the people."

Keenan disagreed, saying "the state budget is going to be in a hole that's anticipated for the next five years."

"The faculty is talking about spending reserves," Keenan said. "I think that would be irresponsible and not prudent at this time, because this is a multi-year problem, and we've put forward a balanced budget based on this furlough program."

The MSCA chapter is Salem State's largest union. The AFSCME and APA combined represent 425 of the university's 799 full-time staff. Another 61 full-time employees of the university aren't members of a union but will still be required to take four weeks of furloughs.

Salem - Jeannine C. (Fontaine) Richards, 96, of Salem, passed away peacefully at Alliance Health at Rosewood in Peabody on Wednesday, May 5, 2021. She was the devoted wife of the late Edward J. Richards with whom she shared 42 years of marriage. Born and raised in Salem, she was the daughter…

Marblehead - Leonard Phillip (Ducky) Lemieux passed away peacefully at home after a brief illness. Born to the late Wilfred and Lauretta Lemieux of Marblehead. Ducky joined the army in 1949. He served in the Korean War until his discharge in 1952 and was awarded numerous medals including a B…