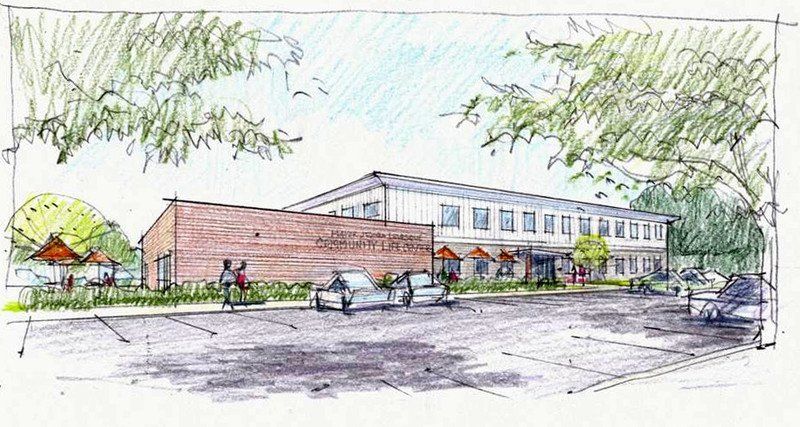 After 20 years of brainstorming, design and reflection, the city now plans for a two-story Community Life Center housed in its own building.

City leaders have filed for permits to build the 20,000-square-foot center that will house the city’s Parks and Recreation and Community Services staff, which includes the Council on Aging and Veterans Services office.

The city already had the local and state permits necessary to build the community center as part of a larger commercial project, Mayor Kim Driscoll said. But the idea fizzled when it became clear they couldn’t “pull off” a commercial building, Driscoll said.

The focus then shifted to a mixed-use project, which eventually evolved into the center having its own building with a secondary building next door, according to Driscoll.

The development will be built at the corner of Boston and Bridge streets, previously the proposed home of the Gateway Center.

The recent direction of the project amounts to giving the community center its own identity and profile within the community, according to David Sweetser, a manager with developer High Rock Development.

Most of the project’s finer details are still in development, including what the community center will cost the city, according to Sweetser.

The project could cost about $5 million, give or take $50-100 thousand, according to Sweetser.

“That number can fluctuate a lot depending on the process,” Sweetser said.

The use of the building “will be similar to what we use our current building for,” said Karen Partanen, the city’s Parks, Recreation and Community Services director.

One difference is it will open up the department’s capacity to do more at once.

“It’ll basically be a multi-purpose facility for the community,” Partanen said. “All our office spaces will be in an area where we can all collaborate a little more.”

There will be other areas where several events could run — even events catering to different age groups.

“The building will be designed where we can run programs at the same time,” Partanen said. “We could run a preschool program while the seniors are doing a dining event.”

“The opportunities are just wide open,” Partanen said. “We will probably have extended hours beyond our typical, 8-to-4, Monday through Friday. They need more of that — the off hours.”

While there are several unknowns about the community center at this point, there’s even less to say about the companion building next door.

“The other building will be approximately five stories, and it’d be closer to the intersection of Boston and Bridge,” Sweetser said. “It will still be related in terms of color and architecture.”

Apartments and retail could be in the picture, according to Sweetser.

The community center will be before several city boards and commissions this summer, starting with the Conservation Commission on July 9, according to Driscoll.

A presentation before the City Council is scheduled for July 16, and the first of several Planning Board meetings is set for July 30, Driscoll said.