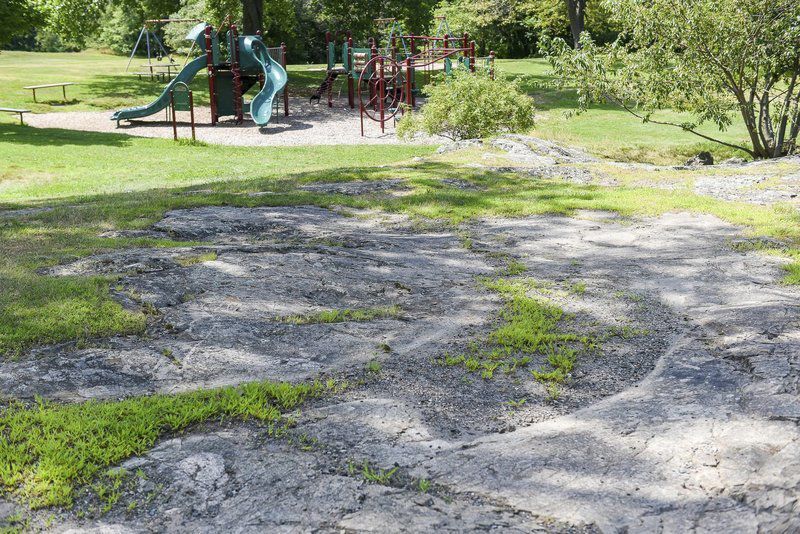 JAIME CAMPOS/Staff photoThe city of Salem is dedicating a plaque on Saturday at the glacial groove found at Mack Park. 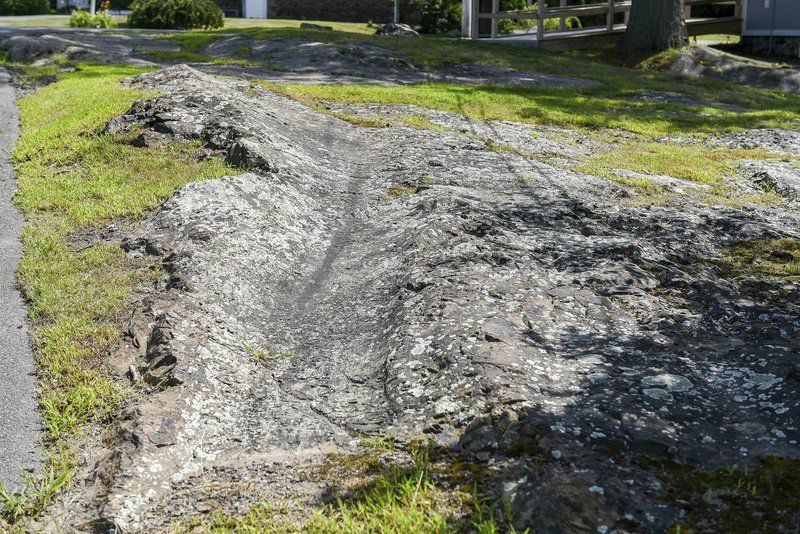 JAIME CAMPOS/Staff photoThe glacial groove at Mack Park in Salem is visible today as long scratches in the rock, measuring 30 feet long, 3 feet wide and 5 inches deep. Geologists say it dates back to around 17,000 years ago.

JAIME CAMPOS/Staff photoThe city of Salem is dedicating a plaque on Saturday at the glacial groove found at Mack Park.

JAIME CAMPOS/Staff photoThe glacial groove at Mack Park in Salem is visible today as long scratches in the rock, measuring 30 feet long, 3 feet wide and 5 inches deep. Geologists say it dates back to around 17,000 years ago.

SALEM — To the average eye, Mack Park looks like an ordinary park with its baseball field, basketball court and playground. But to a geologist, the area high on the hill is the prime site for one of the largest glacial grooves in Essex County.

The long scratches in the rock, measuring 30 feet long, 3 feet wide and 5 inches deep, date back to around 17,000 years ago, says Brad Hubeny, a Salem State University professor and chairperson of geological sciences. Glacial grooves and striations are exposed by the retreat of glaciers, he says. This particular groove at Mack Park traces back to when the Laurentide Ice Sheet was flowing over the area.

“We can identify different landforms,” he said, speaking of other geomorphologists. As a glacier moves, the professor says it picks up rocks underneath it and drags them along, acting like sandpaper scratching across the land. The grooves in the rock that are left behind indicate the direction in which the glacier was moving — in this case southeast.

The glacial groove at Mack Park is located off of Grove Street near the playground area. Hubeny says he frequently brings his students to the site on class trips to see the groove.

On Saturday, Aug. 10, at 11 a.m., the city of Salem plans to dedicate the area of Mack Park with a plaque to commemorate the historic discovery. Mayor Kim Driscoll and members from the Mack Park Neighborhood Association welcome all to attend.

“These signs tell not just the history of who lived here but the important natural history and science that make these places so unique and special,” the mayor said in a statement.

Seven years ago, he wrote to the association saying he was driving through Mack Park and noticed the sign that was previously fixed near the groove was gone. “He asked if we could get the sign back,” O’Connor added.

The association worked to conduct the necessary research and approached the Salem Department of Parks and Recreation with the idea of the plaque. The site was later authenticated by Dr. Lindley Hanson, a Salem State University professor of geological sciences.

“Anything that’s historical should be preserved,” O’Connor said. “To know that we have things like this in our own backyard is important and should be made known.”

Other known glacial features on the North Shore include the Forest River Conservation Area, Devereaux Beach and Marblehead Harbor, Castle Rock in Nahant, and Ship Rock in Peabody.