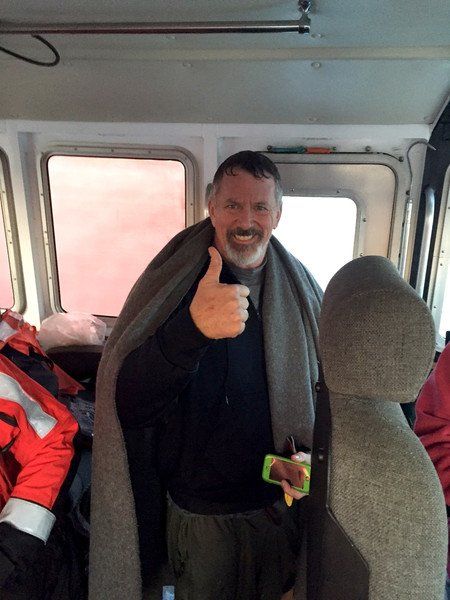 Courtesy photoCapt. Doug Richard of the tug boat Emily Anne gives the thumbs-up after being pulled from the water when the Salem tugboat Emily Anne sank in Boston Harbor Tuesday morning. 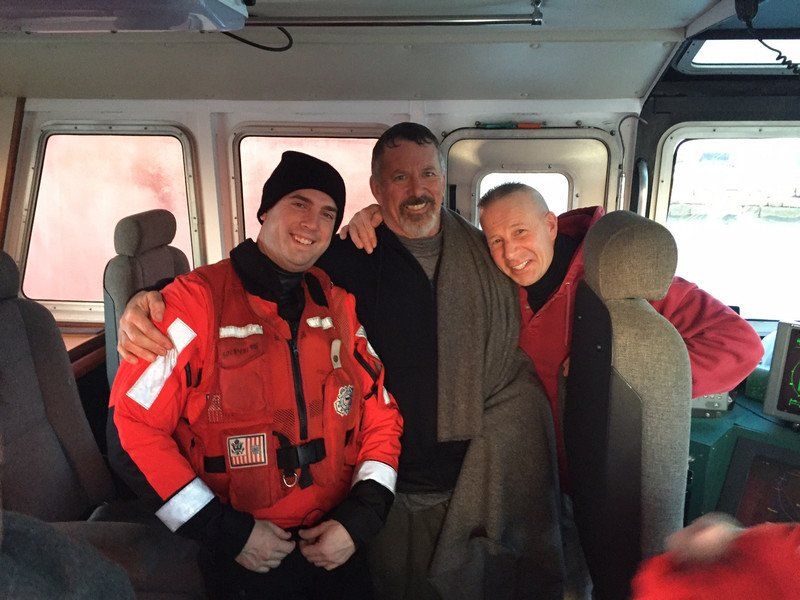 Courtesy photoCapt. Doug Richmond, center, of the tugboat Emily Anne was rescued with two crew members after the 55-foot vessel sank in Boston Harbor Tuesday morning. Pictured with him are an unidentified member of the U.S. Coast Guard, at left, and Boston Harbor Pilot Association Capt. Joseph Maloney Jr., at right.

Courtesy photoCapt. Doug Richard of the tug boat Emily Anne gives the thumbs-up after being pulled from the water when the Salem tugboat Emily Anne sank in Boston Harbor Tuesday morning.

Courtesy photoCapt. Doug Richmond, center, of the tugboat Emily Anne was rescued with two crew members after the 55-foot vessel sank in Boston Harbor Tuesday morning. Pictured with him are an unidentified member of the U.S. Coast Guard, at left, and Boston Harbor Pilot Association Capt. Joseph Maloney Jr., at right.

SALEM — A tugboat owned by a Salem business sank suddenly in Boston Harbor early Tuesday morning, but the captain and two crew members were plucked from the icy waters by friends on a pilot boat that raced to the scene.

The Emily Anne is a 55-foot tugboat belonging to North Shore Marine on Jackson Street. It sank shortly after 6 a.m. after suddenly taking on water from a breach in the hull.

The ship was captained by Doug Richmond and had two other crew members on board, according to Richard Stover, president of the Boston Harbor Pilot Association.

The Chelsea, the association's pilot boat, had transported a pilot to the Emily Anne for navigation through Boston Harbor prior to its sinking.

"The pilot boat is kind of like a taxi," Stover said. "What we do is pilot the ships in and out of Boston Harbor. Every ship needs to have a pilot navigate the ship in and out of port."

Such a pilot was responsible for taking the Emily Anne through Boston Harbor up to about 5:15 a.m., when the Chelsea picked the pilot up off the Emily Anne and started heading back to the office, according to Stover.

Everybody on the Chelsea was familiar with the man running the Emily Anne. That includes association Capts. Joseph Maloney Jr. and Shawn Kelley, who were both aboard at the time. Richmond "was a tugboat captain for another company that used to assist in docking ships," Stover said. "We all know Doug."

On their way back to shore, the crew of the Chelsea heard a mayday call over the radio, according to Stover. The Chelsea immediately turned around and started heading back to the Emily Anne's reported location.

When they were about a half-mile away, the crew reported seeing a light from the boat go out, signaling the urgency of the situation, according to Stover. The water was about 37 degrees at the time and about 40 feet deep at the ship's last known location, roughly 5 miles east of Deer Island.

"They lost sight of the boat," Stover said, "and the boat sunk."

When the Chelsea got to the scene, they didn't see the Emily Anne — only the crew in need of rescue, Stover said. Kelley controlled the pilot boat using remotely accessible controls while Maloney pulled the crew from the water.

"One-by-one, they hauled three people onto the pilot boat and brought them back safely to Boston," Stover said. "It wasn't easy doing what these guys did."

The situation played out perfectly given the Chelsea's proximity to the Emily Anne, according to U.S. Coast Guard Petty Officer Andrew Barresi.

"Anytime something like this happens, the first thing we do is put out a broadcast to any mariners in the area requesting they assist," Barresi said.

The arrival of the Chelsea was followed up by a 47-foot Motor Lifeboat from Coast Guard Station Point Allerton and a helicopter from Air Station Cape Cod.

"In this case, there were people in the area that were able to respond quicker than we were," Barresi said. "That was very fortunate."

An employee answering the phones at North Shore Marine Inc. said the company would not comment or provide further detail on the incident, except to say their employees are safe and they're still looking into what caused the boat to sink.

The Coast Guard, meanwhile, is watching for possible pollution caused by anything aboard the sunken tugboat, according to Barresi.

It's possible the Emily Anne could be recovered, according to Stover.

"We're concerned that when something sinks, it doesn't go straight down. It could go into the channel or, by the shape of the vessel, it could end up somewhere quite a ways away," Stover said. "Especially if it's an obstruction, they'll [recover] it to clear the obstruction."

Part of the North Channel was closed Tuesday into Wednesday for deep draft vessels as the Coast Guard worked to locate the sunken tugboat. That effort had to be put on hold Tuesday due to the inclement weather. The South Channel remained open.

"It happens, and they'll have to find out, once they do an investigation, what the cause was," McHugh said. "I'm just thankful everybody was safe."