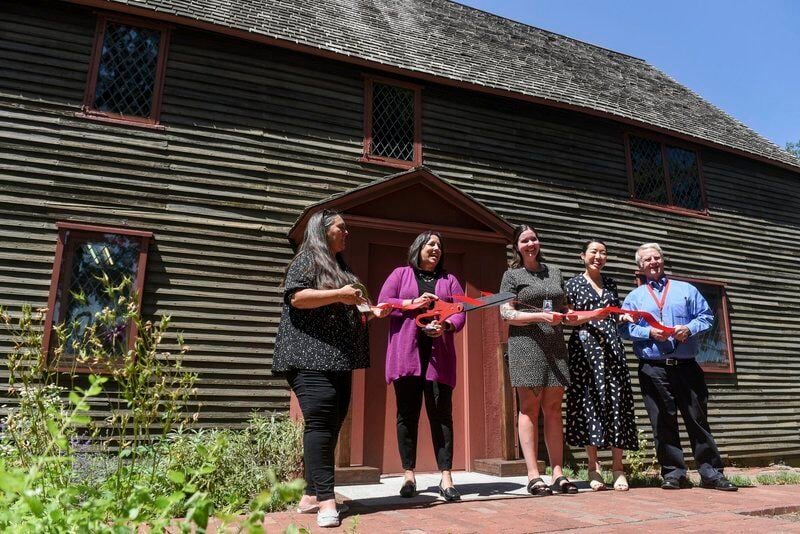 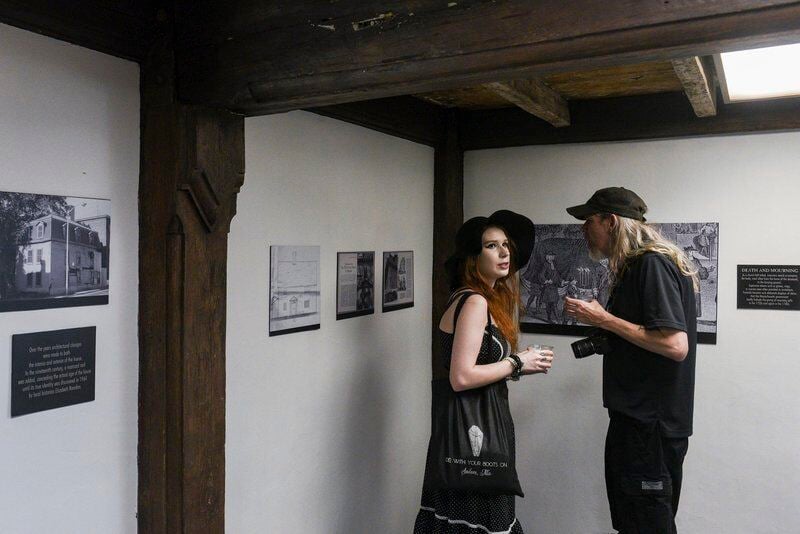 Keegan Bain and Jeff Page take a look at some of the exhibited photos during a ribbon-cutting ceremony to formally open the Charter Street Cemetery Welcome Center in coordination with the Peabody Essex Museum, and the city of Salem. JAIME CAMPOS/Staff photo 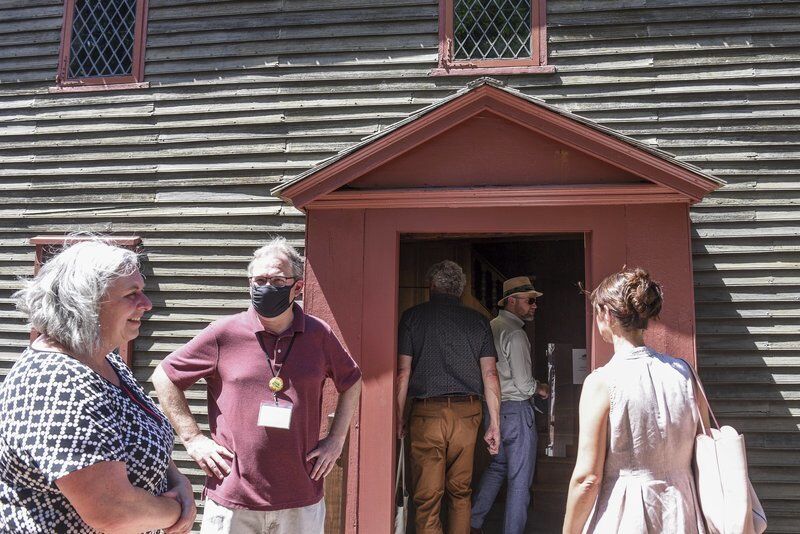 Guests enter the building during a ribbon-cutting ceremony to formally open the Charter Street Cemetery Welcome Center in coordination with the Peabody Essex Museum, and the city of Salem. JAIME CAMPOS/Staff photo

Keegan Bain and Jeff Page take a look at some of the exhibited photos during a ribbon-cutting ceremony to formally open the Charter Street Cemetery Welcome Center in coordination with the Peabody Essex Museum, and the city of Salem. JAIME CAMPOS/Staff photo

Guests enter the building during a ribbon-cutting ceremony to formally open the Charter Street Cemetery Welcome Center in coordination with the Peabody Essex Museum, and the city of Salem. JAIME CAMPOS/Staff photo

SALEM — One of the country's oldest landmarks now has its best-ever welcome mat.

City officials, Peabody Essex Museum employees and local historians on Wednesday celebrated the opening of an official "Welcome Center" in the Samuel Pickman House, just outside of the Charter Street Cemetery.

Independent of the 103-degree heat index attendees endured during the event, local historian and professor Emerson "Tad" Baker said the situation with the building "just warms my heart."

"This whole project for me is incredibly exciting," Baker said, standing at the center of a new brick path around the back of the Pickman House. "I'm just absolutely thrilled to see the Peabody Essex Museum and the city of Salem in partnership to help give this building — and this cemetery — the credit that it's long overdue."

Established in 1637, the Charter Street Cemetery is among the oldest in the country and is the final resting place for several historic figures, including many connected to the Witch Trials — making it a major tourist attraction and a stop on several local tours.

The cemetery has also paid the price for Salem's popularity. For the last several years, officials and residents have decried a perceived lack of respect the site gets from visitors who were known to walk off the paths, lean against or sit on gravestones, even picnic on some of the site's tombs. A $690,000 renovation project recently wrapped up to establish new paths, set up protective lighting and more.

"This was an endangered resource," Baker said of the cemetery. "Some of the best stones in there were in danger of breaking."

The Welcome Center, positioned between Charter Street and the Salem Witch Trials memorial that borders the cemetery, is run by the same city employees managing Pioneer Village and the Witch House on Essex Street. With that, the city will now have some of its own staff inside the cemetery itself.

But the Welcome Center does more than help protect the Old Burying Point. It also opens to the public a historic home that, until last April, was used by Peabody Essex Museum as office space, according to Bob Monk, Peabody Essex Museum's chief of security, facilities, operations and planning.

"We had to do a little bit of work to make it ADA-compliant, or at least as ADA compliant as you can make it," Monk said. "We did take some measures to protect the historic fabric, the floors. We put down carpet to protect the original floors."

The Pickman House itself is a first-period building that dates back to 1665 and, today, is one of very few historic Salem buildings that still stand on its original foundation. It was restored in 1969 by Historic Salem and purchased by the museum in 1983, according to Peabody Essex's website. The building is named after its first tenant, Samuel Pickman, a famous 17th-century mariner.

That department was the last to use the space, moving out last April ahead of the Welcome Center work beginning, according to Monk.

Baker said he first got a chance to see the inside of the Pickman House when the archaeology department was in it 27 years ago.

"The Pickman House has some amazing architectural features. They have some of the best-dressed beams," Baker said. "You don't see that in most of these homes... and this building has never really been open to the public before, where you could actually appreciate that."

Elizabeth Peterson, who now manages the Welcome Center alongside her directorship of Pioneer Village and the Witch House, said they "really want to populate the year with lectures, events. We want to get really active with our programming, reach out even to the local school system and find interesting ways to communicate this history."

That will fire up soon, with events already scheduled with local author Dan Fury, who in just a few days will publish a book titled "If These Stones Could Talk." The book digs into the history and stories buried within the Charter Street Cemetery. It's already available on Amazon in Kindle format.

"The cemetery has really needed someone to keep an eye on it for so long," Fury said. "It's such an important, vibrant, and interesting part of the city's history, and for so many years, people didn't even know it was real."

That's a comment Baker also shared, speaking to the loss of context the cemetery faces when surrounded by the buzz of 21st-century tourism.

"People are used to Disney World. They don't necessarily realize all this stuff is real," Baker said. "Do you realize you're sitting on a 17th-century crypt that has had people buried in it for 350 years?"

Baker removed his hat and wiped off his brow.

"Now to have this recognized, to have it maintained and looked after by the city," he said, "it just warms my heart. It's thrilling to see."

The Welcome Center is open daily from 10 to 6 p.m. from May 15 to Nov. 15, with reduced hours the rest of the year. For more information, visit charterstreetcemetery.com.