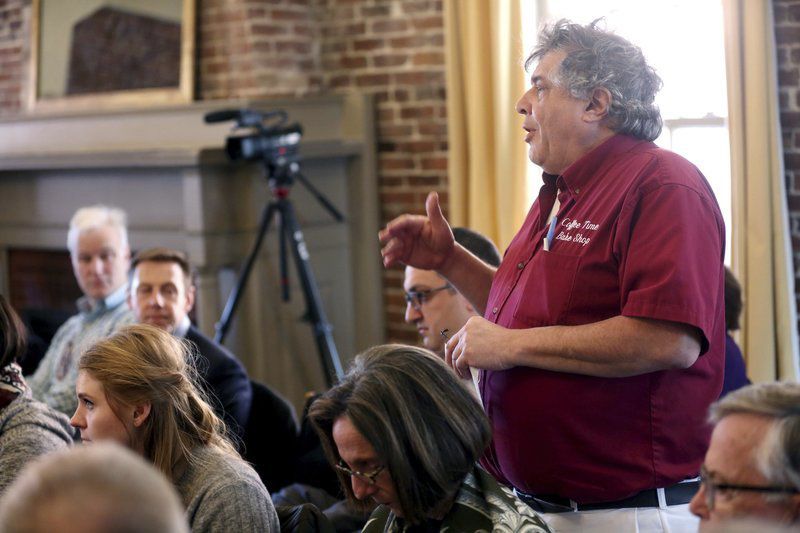 Ken Yuszkus/Staff photoRobert Liana, president of Coffee Time Bake Shop in Salem, asked the task force if there are any state programs to help workers who make about $16 an hour afford their health care premiums. 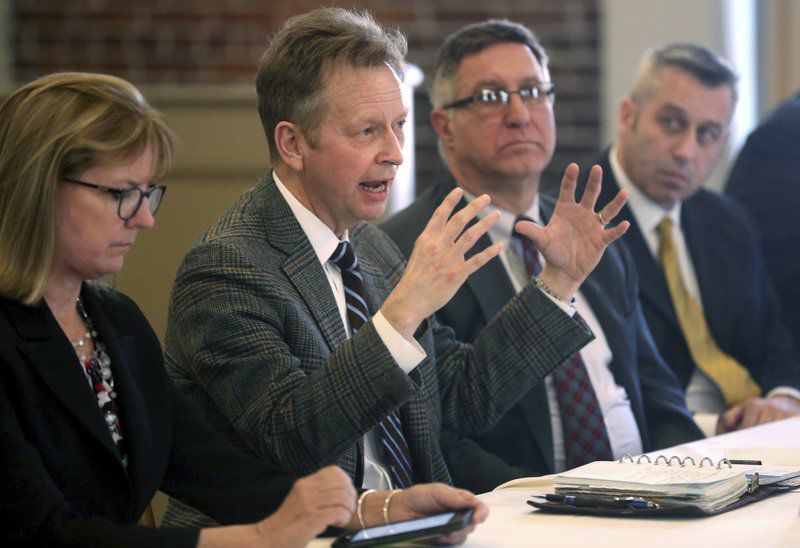 Ken Yuszkus/Staff photoRetailers Association of Massachusetts President Jon Hurst tells the task force about his group's ballot initiatives, including creating a permanent sales tax holiday and rolling back the sales tax to 5 percent. 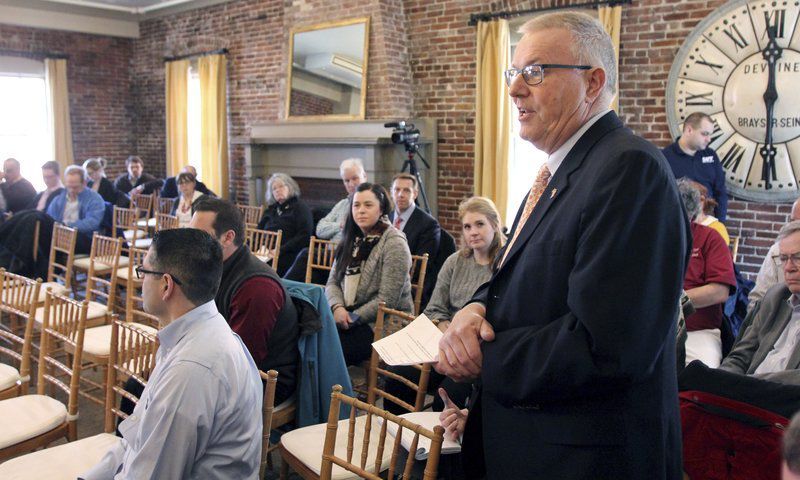 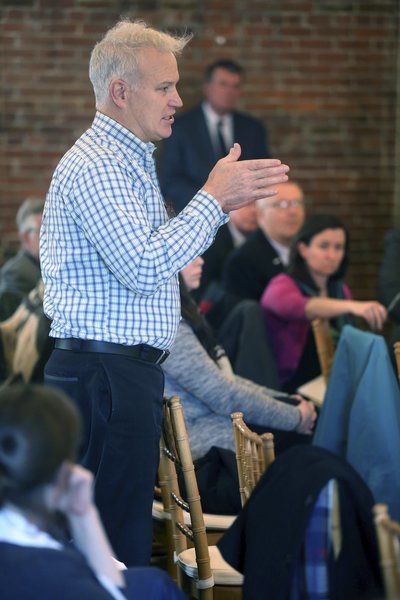 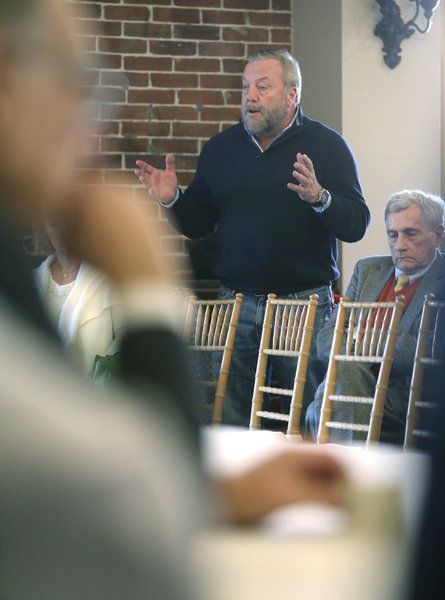 Ken Yuszkus/Staff photoRobert Liana, president of Coffee Time Bake Shop in Salem, asked the task force if there are any state programs to help workers who make about $16 an hour afford their health care premiums.

Ken Yuszkus/Staff photoRetailers Association of Massachusetts President Jon Hurst tells the task force about his group's ballot initiatives, including creating a permanent sales tax holiday and rolling back the sales tax to 5 percent.

SALEM — A state Senate task force meant to strengthen local retail got an earful from Salem business leaders speaking frankly about the pressures they face from higher health care costs and a proposed increase in the state's minimum wage to $15 an hour.

"It's not easy to do business in Massachusetts," said Rinus Oosthoek, executive director of the Salem Chamber of Commerce, who presented a laundry list of items with which small businesses are dealing.

He wondered why the state could not impose a sales tax on internet sales to level the playing field between online retailers and shops on Essex and Washington streets.

"I don't understand why it hasn't changed," he said.

Oosthoek also addressed concerns from Salem businesses about proposed ballot initiatives for paid family and medial leave and a minimum wage increase, both supported by the Raise Up Massachusetts coalition of labor unions, religious and community organizations. There is also legislation under consideration on Beacon Hill to address these issues.

Any further increase in the minimum wage — it went up to $11 an hour on Jan. 1, 2017 — should be done over a long period of time so businesses can adjust, he said.

The same goes for any mandate for paid family and medical leave. Oosthoek suggested that businesses should first have to cover short time frames.

He also advocated for a teen wage in Massachusetts that's lower than the minimum wage. Robert Liani Jr., president of Coffee Time Bake Shop on Bridge Street in Salem, said he was starting to warm to the idea, since many teens are having trouble getting job experience.

The Task Force on Strengthening Massachusetts Local Retail is made up of elected officials, union leaders, and business owners. It includes Jon Hurst of Beverly, president of the Retailers Association of Massachusetts, and Jon Cahill, director of marketing for the Salem-based Landri & Arcari Rugs and Carpeting. The group looks at competitive issues facing small businesses.

Monday's public hearing was hosted by state Sen. Joan Lovely, a Salem Democrat, at Turner's Seafood at Lyceum Hall. The gathering was run in an informal manner by Chairman Michael Rodrigues, a Westport Democrat.

To Oosthoek's point, Rodrigues said a 1992 U.S. Supreme Court decision bars the state from imposing a sales tax on an online sale if a business does not have a physical presence in Massachusetts.

The rising cost of health care was a topic for some retailers. Liani, of Coffee Time Bake Shop, asked the task force if there are any state programs to help workers who make about $16 an hour afford their health care premiums, similar to a program in place before the Affordable Care Act.

George Carey, owner of Finz Seafood and Grill and Sea Level Oyster Bar and a member of the board of the Salem Chamber of Commerce, said he is dealing with double-digit increases for health insurance premiums for his employees. This has led to increases in deductibles and copays. It would help, he said, if small businesses could get together and bargain with health insurance companies.

"We are not allowed to pool and we just get crushed," Carey said.

Hurst also asked the task force to roll back the time and a half pay requirement on Sundays, which dates back to 1980 when stores were first allowed to open on Sundays. Back then, Hurst said, the minimum wage was $3 an hour. If the minimum wage goes up to $15, he said, a worker would make $22.50 an hour on Sundays.

"If the Legislature is unwilling to fix that, then there is no support for small business in Massachusetts," Hurst said.

Jim Carvalho of the AFL-CIO of Massachusetts said many workers rely on that extra income. Stores that employ fewer than seven people do not have to pay time and a half on Sundays, he noted.

"When you run the numbers, it does not quite make sense to open the doors," he said.

Hurst said retailers are fighting back, and have proposed a ballot initiative to trim the state's sales tax to 5 percent from 6.25 percent, and create a permanent sales tax holiday. This would make Bay State retailers more competitive with online retailers and states like New Hampshire that have no sales tax.