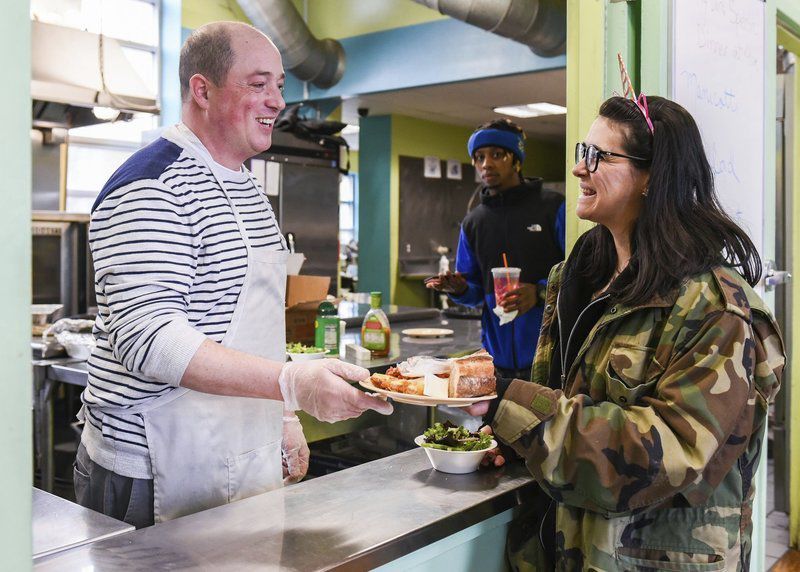 JAIME CAMPOS/Staff photo Jason Etheridge hands out a plate of food to Jackie Misci as Lifebridge in Salem are making sure the homeless are supported during the COVID-19 pandemic. 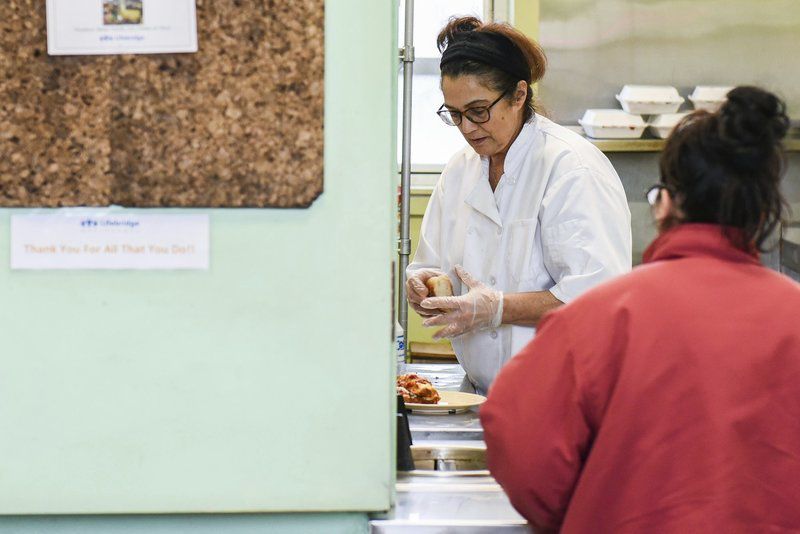 Kitchen manager Karen Andrew readies a meal as Lifebridge in Salem steps up its support for the homeless. JAIME CAMPOS/Staff photo 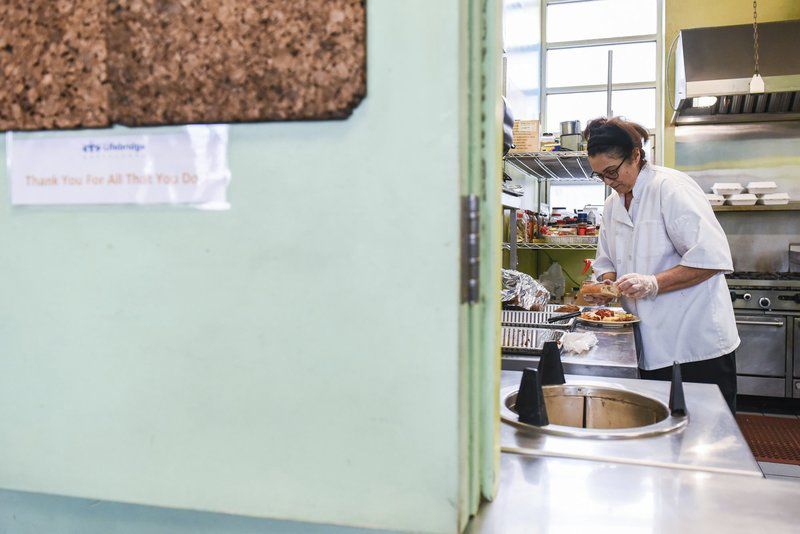 JAIME CAMPOS/Staff photoKitchen manager Karen Andrew prepares a plate of food Thursday afternoon as the homeless are being supported during the coronavirus pandemic at Lifebridge in Salem.

JAIME CAMPOS/Staff photo Jason Etheridge hands out a plate of food to Jackie Misci as Lifebridge in Salem are making sure the homeless are supported during the COVID-19 pandemic.

Kitchen manager Karen Andrew readies a meal as Lifebridge in Salem steps up its support for the homeless. JAIME CAMPOS/Staff photo

JAIME CAMPOS/Staff photoKitchen manager Karen Andrew prepares a plate of food Thursday afternoon as the homeless are being supported during the coronavirus pandemic at Lifebridge in Salem.

Many North Shore families are staying home amid the escalating COVID-19 outbreak. But what about those who don’t have a home?

Organizations that serve the homeless are putting in overtime to help those in need while also protecting their own staff.

For now, things are moving as they should, said Corey Jackson, executive director at Citizens Inn in Peabody. The agency provides housing and meal programs for those in need.

“It’s all working, and that’s a sign of a strong organization,” Jackson said. “We were able to kick into hyperdrive at Haven from Hunger, a division of our organization that I already thought was maximized in its capability. I didn’t think that was possible.”

These organizations provide more than just shelter and a hot meal.

“The people that are living with us are seeing the same things we are on the news, and slowly but surely, the outside world is closing,” said Jason Etheridge, executive director of Lifebridge in Salem, River House in Beverly and the Grace Center in Gloucester. “We’re talking about a group of people who are, with limited resources, watching the rest of the world shut down around them.”

The result, Et heridge said, is “a lot of hopelessness right now.”

“We’re really looking at people’s mental, physical, and spiritual health in a really holistic way right now,” Etheridge said. “There’s a chronic population, a population that’s unsheltered, and here in Salem for example, we’re continuing our day services to the best of our ability.”

Preparing for the unexpected

When caring for the homeless — whether it’s individuals or families — Jackson said there’s a lot of trauma involved.

“Complex trauma is already a huge challenge as soon as any of our families enter our shelter program, and we’re a trauma-informed agency. We’ve studied it. We’ve trained all our staff on it,” he said. “I’m so thankful to the staff for really taking that training seriously, because we’ve never needed it more than we do now.”

But one thing makes that difficult for the shelters today: the crisis brought by COVID-19 is changing daily, and that has thrown a lot of regular systems offline, according to Tina Kirk, Citizens Inn’s program director.

“Things have abruptly changed,” she said. “Children are suddenly home from school. People have lost their day care. Any appointments they had progressing with housing and possibilities for future permanent housing have been put on hold.”

And those, it turns out, are the things families entering Citizens Inn need the most, Kirk said.

“Their main concerns are making sure they have their children in school or day care so they can get a job and work on housing, so they can get out of shelter,” Kirk said. “Now, all of that is on standstill — and it’s extremely overwhelming, with the mental health challenges and the coping skills they do have.”

Being said, “we’re in constant communication with the families,” Kirk continued. “The front-line staff are still coming in every day to work their shifts.”

“We pride ourselves on being a very dignified living environment,” Jackson said. “Amidst this crisis, we have to sort of lock things down in a way that doesn’t feel very dignified. It starts to feel more like an institutionalized environment than a home.”

Lifebridge and River House are “currently at capacity,” Etheridge said, “and we’re trying to care as best possible for the people who are here with us. It’s a very nerve-wracking time, and there’s a lot of angst. There’s anxiety.”

There’s also disruption. These are people who have established routines that have suddenly been thrown on hold just as much as the families in programs at Citizens Inn.

“Where would unsheltered people go naturally?” Etheridge said. “Dunkin’ Donuts, Starbucks, the library. As those close down, we’re seeing limited options for the places these people would be at.”

Etheridge said he considers the pandemic and the economic downturn “the beginning. The need for our services is only going to grow as this continues.”

But where there are fears, there are also causes for celebration.

“The community has stepped in,” Jackson said. “All these restaurants, tons of people who are either out of work or under-employed right now are coming to our front door every morning asking to help out or what they can do.”

So far, Kirk said, things are working out.

“I was there Tuesday night,” she said. “Just around dinner time, there had been 85 take-home meals.”

“We’re so grateful,” Jackson continued, rattling off a long list of local businesses and restaurants that have pitched in before laughing and saying he probably shouldn’t name them.

“As they’re struggling to get their inventory out the door, they’re actually having their chefs cook and prepare meals in their kitchens and delivering that to us.”

But there’s one thing shelters need right now more than anything, both Jackson and Etheridge agreed: cash.

“Cash donations have been critical because of all the changes we’ve had to make,” Jackson said. “Almost every change we’ve made has had some form of cost associated with it, and the cash donations that have come in to support our efforts have been very helpful and must continue throughout the crisis, or things will become a little more challenging for us.”

“Everyone’s looking for the same thing. We need philanthropic generosity. We’re going to need funds to continue operating,” he said. “Short of that, (we need) some of the very things everyone is looking for — food, supplies — and not necessarily tomorrow, but three weeks from now.”

At Citizens Inn, which provides low-income and homeless housing and runs the Haven from Hunger food pantry, volunteers are needed to help bag groceries and meals for clients. Anyone who is healthy and wants to sign up can email Gianna Langis at glangis@citizensinn.org. Cash donations to help deal with a surge in unforeseen expenses and purchase additional food can be made via the organization's website, www.citizensinn.org/give. Donations of food or clothing are suspended until further notice, due to sanitary concerns.

Executive Director Jason Etheridge says there are a few ways to help Lifebridge, which operates locations in Salem, Beverly and Gloucester. You can make cash donations, via lifebridgenorthshore.org/support/donate/, inform local restaurants and caterers that Lifebridge will accept frozen or prepared items that can be dropped off at 56 Margin St. in Salem, and give in-kind donations of food, clothing, personal care items and toiletries.