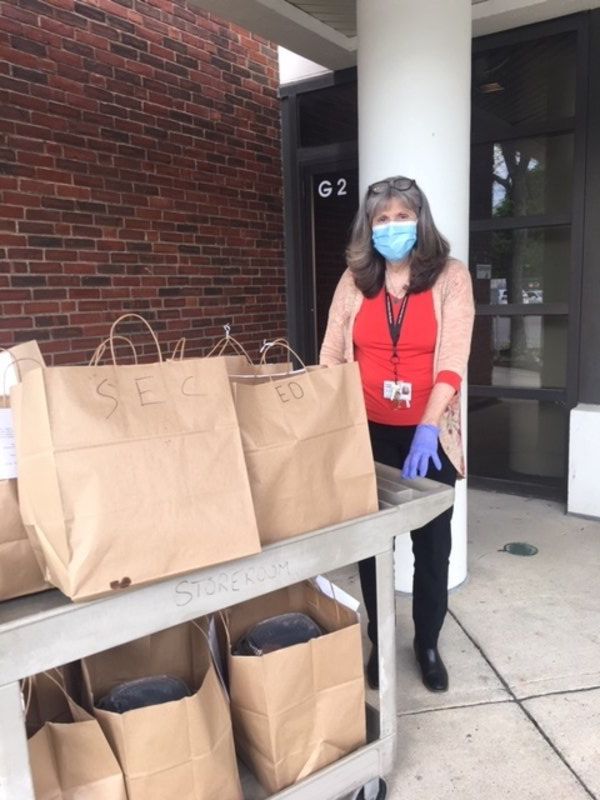 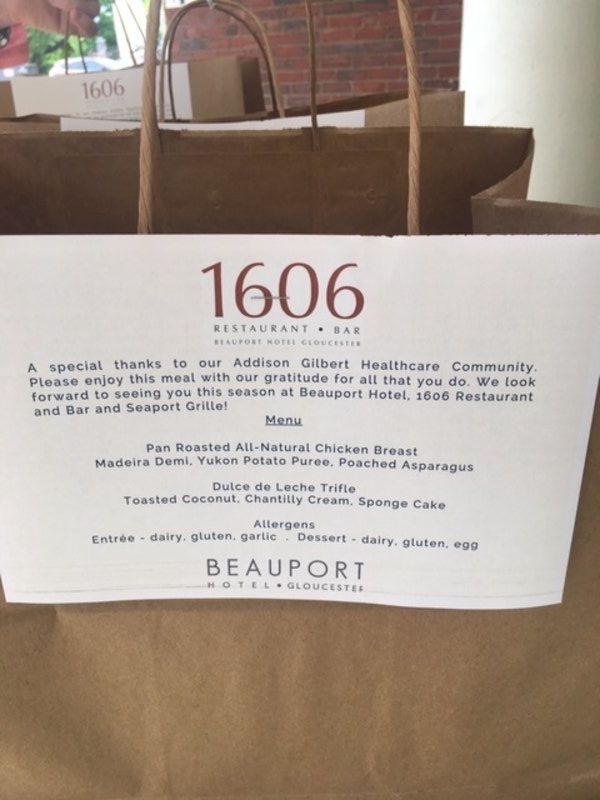 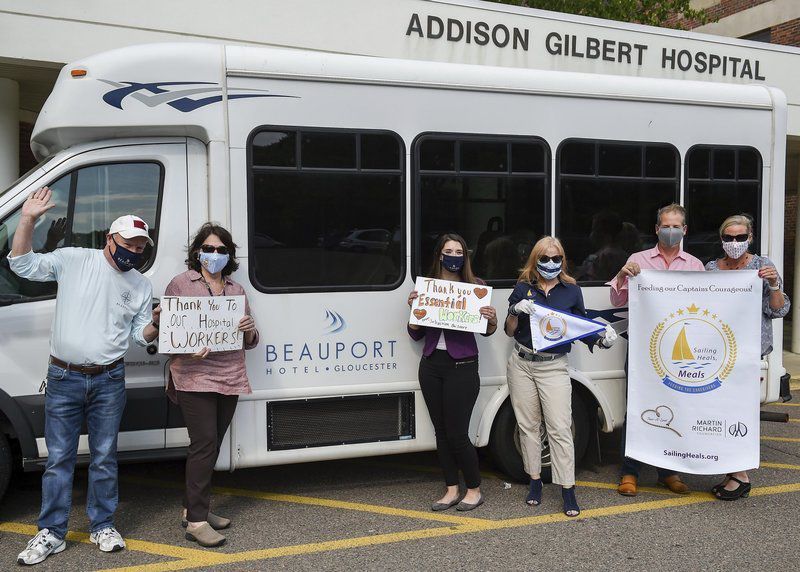 From left, Beauport Hotel's Bob Meehan, Kathy Cuddyer, Teresa Belmonte, Patricia Boisvert of Sailing Heals, and Ray and Lauren Johnston, during meal deliveries by Sailing Heals Meals, an initiative to feed frontline medical workers in the North Shore. With the help of Beauport Hotel, they provided meals to feed the entire evening and overnight staff at the Addison Gilbert Hospital in Gloucester on June 3.JAIME CAMPOS/Staff photo

From left, Beauport Hotel's Bob Meehan, Kathy Cuddyer, Teresa Belmonte, Patricia Boisvert of Sailing Heals, and Ray and Lauren Johnston, during meal deliveries by Sailing Heals Meals, an initiative to feed frontline medical workers in the North Shore. With the help of Beauport Hotel, they provided meals to feed the entire evening and overnight staff at the Addison Gilbert Hospital in Gloucester on June 3.JAIME CAMPOS/Staff photo

In the past month-and-a-half, Sailing Heals has delivered more than 1,300 meals to health care workers all over the region who are on the front lines of the coronavirus pandemic.

The Salem-based nonprofit is one of several groups on the North Shore that have taken up the call to "feed the front lines."

Last Wednesday, the organization, through its Sailing Heals Meals program, delivered 80 meals — prepared by restaurant staff at the Beauport Hotel — to the entire evening and overnight shifts at Addison Gilbert Hospital in Gloucester.

"With this delivery we feel like we've truly covered the North Shore," said Trisha Boisvert, executive director of Sailing Heals, two hours before she was due to meet up with Ray Johnston, general manager at the Beauport Hotel, to deliver the chicken dinners together at the shift change.

At this point, Boisvert said, the meals program is on track to reach 1,500 meals by the end of June. And, if there is a resurgence of COVID-19 cases later in the summer, the program is well situated to start up again "pretty quickly," she added.

Sailing Heals began its meals program April 15 in partnership with the Martin Richard Foundation, and has helped feed staff at hospitals from Chelsea to Lynn, Salem and Gloucester.

"Normally we take cancer patients out sailing, but we can't do that now," Boisvert said. But we wanted to do something (for caregivers) to show we care."

The Richard Foundation provided a grant to Sailing Heals, which was established in Marblehead in 2011, to launch the meals program. To date, the program has raised more than $26,000 from numerous local foundations, businesses and individuals.

“When this crisis began,” Bill Richard told The Salem News in a previous interview, “like everyone we’ve been trying to figure out what our role might be to help people.”

Boisvert said she's also reached out to AdviniaCare in Salem and another long-term care facility to start providing meals to nursing home staff, who are under "a lot of pressure and stress" as they care for a population most at-risk to the virus.

Part of the mission too, she said, is to help out local restaurants, many of which have seen their business decimated by having to close to diners to prevent spread of COVID-19.

In most cases, the money raised for the meals program goes to pay restaurants for the food, although one or two restaurants have donated the food for health care workers, Boisvert said.

For more information on Sailing Heals Meals, go to www.sailingheals.org/event/sailing-heals-meals-thank-you/.