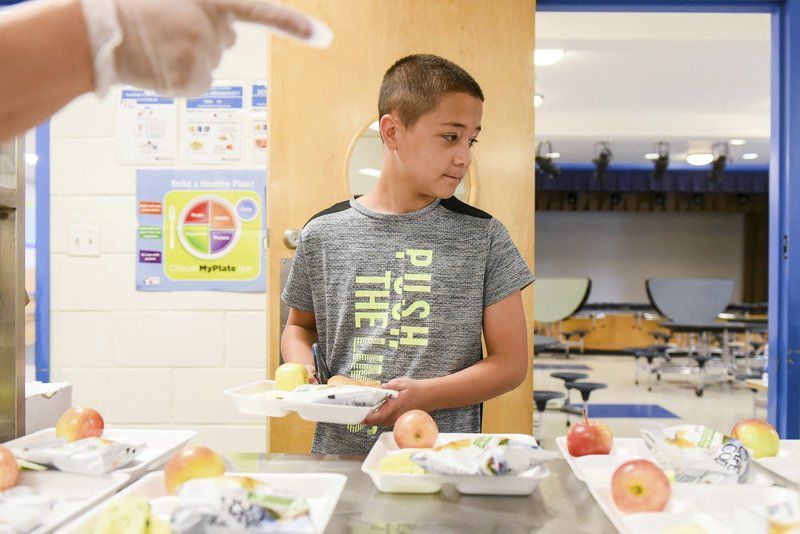 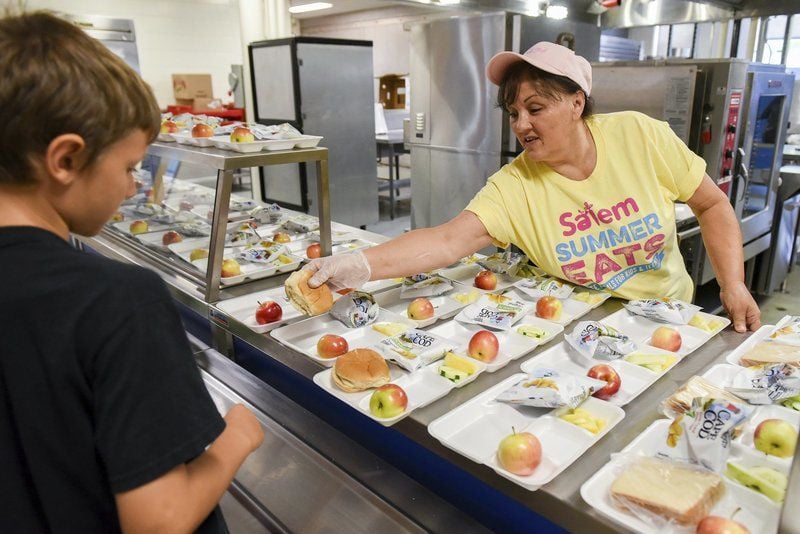 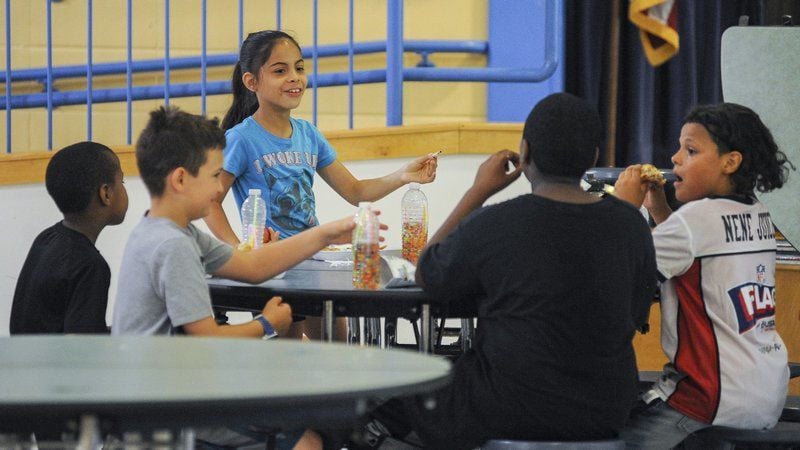 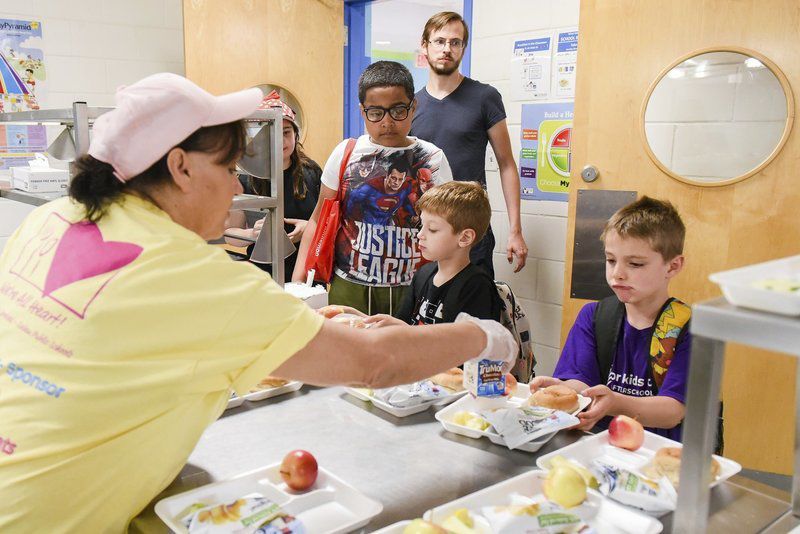 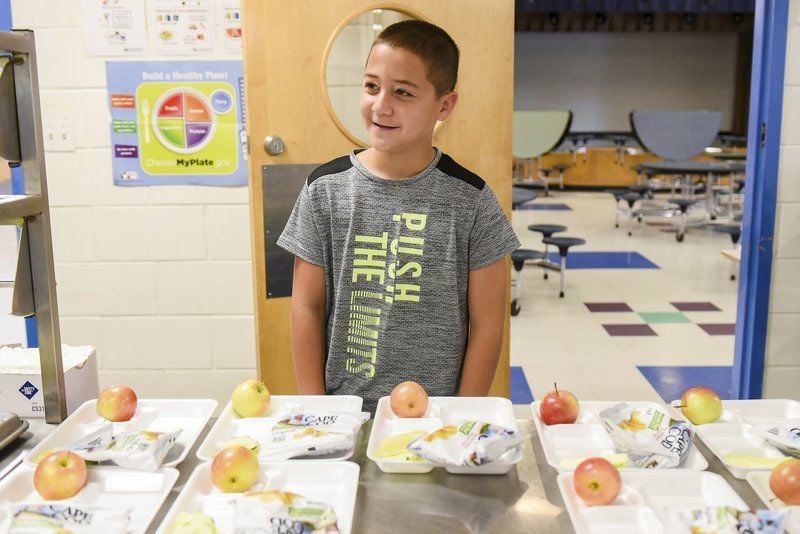 JAIME CAMPOS/Staff photoC.J. Sverker, 11, smiles as he waits for his chicken sandwich courtesy of Project Bread and Salem Public School at the Bates Elementary School in Salem. 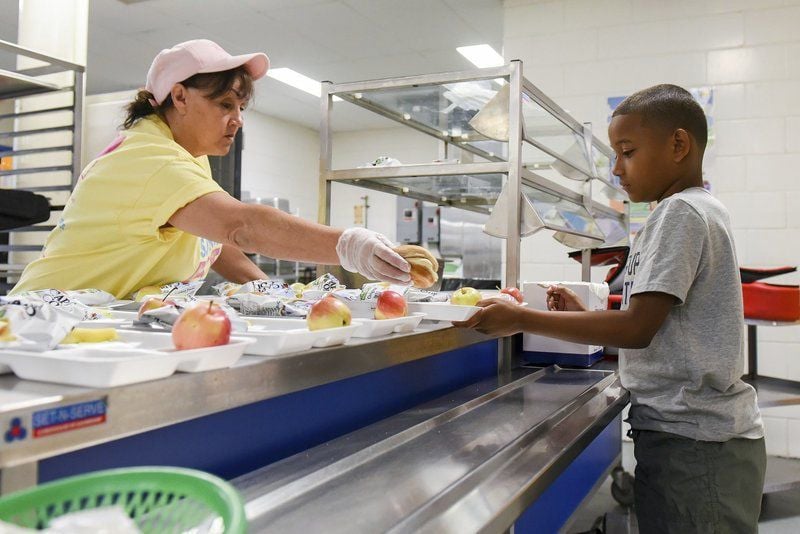 JAIME CAMPOS/Staff photoC.J. Sverker, 11, smiles as he waits for his chicken sandwich courtesy of Project Bread and Salem Public School at the Bates Elementary School in Salem.

SALEM — Feeding America reports 1 in 9 children struggles with hunger in Massachusetts. And the 10-week stretch of summer vacation leaves many wondering where they’ll find their next meal.

Kicking off its 16th year this July, Salem Summer Eats provides free breakfast, lunch and dinner for those 18 and under at eight locations across the city. On average, the program serves between 60 to 91 meals per day, says Deb Jeffers, food services director for the Salem Public Schools. Locations include Salem High School, Rainbow Terrace, the Point neighborhood and several elementary schools, among others.

“Once school is out, kids are still hungry,” said Jeffers, who’s served as director for the last 11 years. “It’s a wonderful program offered for kids; without it, things would not be good.”

Serving up fresh fruit and produce from local farms, Jeffers says Summer Eats also provides activities for children to enjoy. She says their main goal aims to take away the stigma attached to those who struggle with hunger.

“We’re trying to break down the barrier,” she added.

The most popular event, Plummer Youth Promise’s OnPoint Supper on the Grill, began several years ago as a way to reach teenagers, says Jeffers. Held Tuesday through Friday at Leavitt and Congress streets, the night serves up grilled chicken, hot dogs and hamburgers from 4 to 6 p.m. Last year at that location, Jeffers said the program served a total of 1,416 meals in 19 days, averaging about 75 per day.

Salem Summer Eats, which runs through Aug, 9, is funded by the Salem Public Schools Food and Nutrition Services and the City of Salem. Bass River Inc. sponsors lunch at the Salem Public Library.

Project Bread, a nonprofit based in Boston, partnered with the city and school district for the initiative.

Elizabeth Greenhalgh, Project Bread’s communications and development vice president, said Salem has a higher poverty rate than the national average. In the city’s public school system, 82 percent of students are eligible to receive free or reduced meals during the academic year.

“We have a lot of faith in the program there,” she said of Jeffers and the community partners in Salem. Across Project Bread’s 1,100 sites in Massachusetts, Greenhalgh added how Salem’s participation rate is 21 percent, eight percent higher than the state average.

The Open Door food pantry in Gloucester works to provide nutritional resources to children and families during both the summer months and throughout the year.

For the past 17 years, Julie LaFontaine, executive director at the food pantry, says their free 10-week Summer Meals Program provides locally sourced, kid-friendly dishes for those under 18.

“The goal is to make sure kids eat and have a little bit of fun,” she says, adding how they’ve now hit the halfway point in the summer. “When it comes to good health, there’s nothing more basic than good nutrition."

The Open Door prepares and delivers meals to 15 location sites across Gloucester and Ipswich, serving primarily lunch and a few breakfasts and dinners. LaFontaine added that although attendance ramps up as the summer progresses, the program is not as utilized as it could be in the community.

“People are stretching to make ends meet,” she said. The Open Door food pantry and mobile market serves 1 in 6 Gloucester residents, she says.

“Food is the most basic of needs,” LaFontaine added. “The communities that rally around providing nutrition for people are really the heroes.”

Due to inaccurate information provided to The Salem News, the original version of this article incorrectly described the meals available at the Salem Public Library. Lunch is available at noon at the library, Mondays through Fridays through Aug. 30.