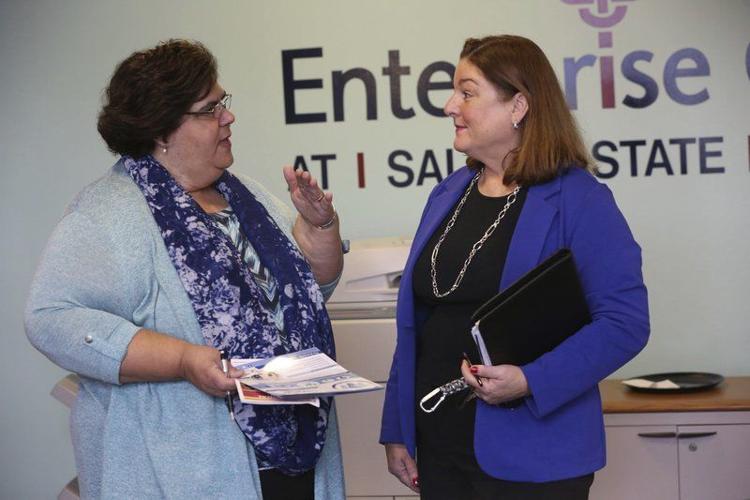 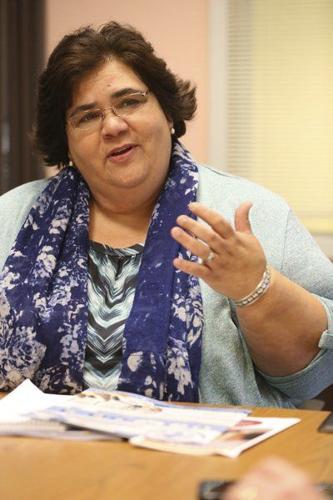 The Enterprise Center’s Laura Swanson speaks about the new initiatives at the center.

The Enterprise Center’s Laura Swanson speaks about the new initiatives at the center.

Swanson says the center at 121 Loring Ave. has two high-profile efforts in February that will stretch beyond the center’s 53,000 square feet on the campus of Salem State.

The first is a collaboration with Salem Congressman Seth Moulton and the Roxbury-based Initiative for a Competitive Inner City, whose CEO is former Massachusetts Treasurer Steve Grossman.

This regional initiative will make available MBA-like training for established businesses poised to grow in seven cities on the North Shore. It’s training normally given to business owners in large cities or urban areas. This is the first time the ICIC, as it’s called, will take a regional approach.

It’s all part of expanded initiatives at the center, which also contains the work of the North Shore Alliance for Economic Development, which works on regional economic development issues. Swanson also serves as this organization’s interim executive director.

Outgoing Salem State University President Pat Meservey, who serves as the alliance’s chairwoman, praised the work of the Enterprise Center and the North Shore Alliance.

She liked that Swanson was bringing together the Enterprise Center, the alliance, Salem State and the North Shore Workforce Investment Board, which oversees the region’s career centers and job training efforts “to really build the resources of economic development on the North Shore.”

About the Enterprise Center

Swanson, a Salem resident and a mother of two young daughters, is marking her second year as executive director of the center, with a salary of $140,000. She oversees a budget of nearly $1 million.

The former Salem city councilor-at-large has been with the center since 2008, and she has also worked as the center’s chief operating officer. Swanson, who studied history at Salem State University, previously worked with medical orthopedic practices for more than 20 years and had her own business which provided consulting and project management services for physician-owned practices.

“I love the business of business,” Swanson says. “I also think that entrepreneurship is very empowering, and it really creates opportunities for people in ways that they might not ever explore.”

The center’s former longtime CEO, Christine Sullivan, who directed the Enterprise Center from 2002 to 2014, died last year, and the center renamed its large training room in her memory. Greg Smith headed the center for a time in 2014 before Swanson took over.

The center is housed in a former industrial building where about 40 small businesses, including startups and established companies, rent space. It’s 100 percent occupied, Swanson says.

Business owner development is a major focus of the center, which last year offered 65 programs with about 2,100 registrations. There are Start-Up Tuesdays, CEO groups and other programs that allow tenants and program participants to rub elbows with like-minded business people or powerful CEOs, Swanson said.

“It’s not just someone who goes into their office and then sort of does their work,” Swanson said of the type of business that locates in the center. “There is an entrepreneurial community here. They like being on a university campus, just the sort of vibrancy of that, and sort of the dynamic of that piece.”

On Feb. 6, the Enterprise Center will play host to the kickoff of a nationwide program run by ICIC called Inner City Capital Connections.

The program runs in individual cities, but Meservey said this is the first time the program will take a regional approach, treating the North Shore as a whole.

The program is meant to bolster the skills of urban entrepreneurs whose businesses are stuck and whose owners need more training, says Grossman, who calls it “a 40-hour mini MBA on steroids.” The focus is on “capacity, coaching, connections and capital,” he says.

In working with Congressman Moulton and his staff, including Moulton’s Economic Development Director Jason Denoncourt, Moulton came up with the idea of working the program regionally, instead of focusing on one city or the other.

The seven cities on the North Shore that are part of the program are: Lynn, Salem, Beverly, Peabody, Gloucester, Newburyport and Amesbury.

“I think the coordination piece of this was really Seth’s big brain storm here,” Grossman said.

“They are going to treat the North Shore as one city,” Swanson said. “So that if we can get three to five businesses from each of those cities, they will then go to Boston, get this kind of training, this kind of access to different kind of programming component, and then when they are done with that, we will be able to establish an alumni group up here on the North Shore.”

“It doesn’t really matter what industry you are in,” said Noreen Hazelton, the assistant director of the Enterprise Center, about what industry a business might be in to participate.

The following week, the center will launch a technology initiative spearheaded by North Shore Technology Council President Linda Saris. The technology council serves as a membership organization of tech companies on the North Shore.

To bolster resources for tech on the North Shore, Swanson and Saris came up with the idea of forming a yearlong coalition.

“The goal was to sort of spotlight and strengthen the technology companies, to identify the resources and support to those companies on the North Shore,” Swanson said.

The council will join the biotech incubator North Shore InnoVentures of Beverly, the Salem-based North Shore Workforce Investment Board, the Enterprise Center and the alliance in a kickoff on Feb. 15 at Analogic Corp. in Peabody. Analogic’s new president and CEO, Fred B. Parks, is scheduled to speak.

These organizations are planning events throughout the year, Swanson said, with the goal of having a North Shore technology summit in September.

Enterprise Center by the numbers