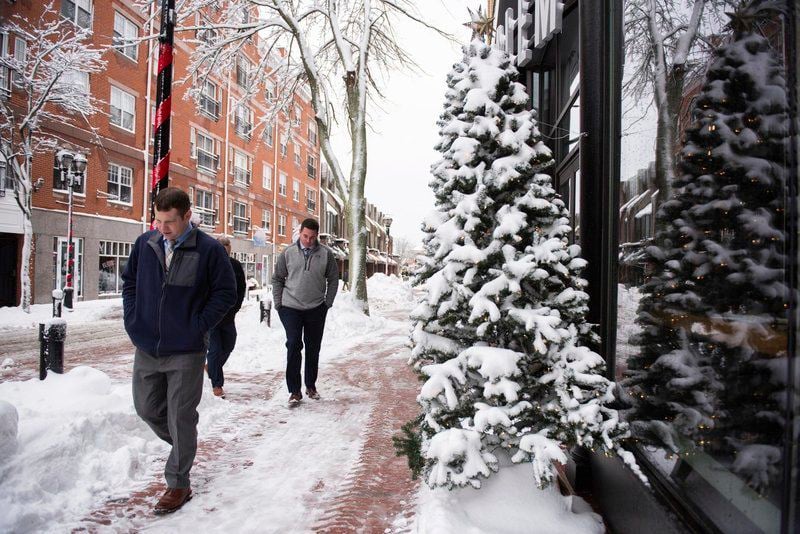 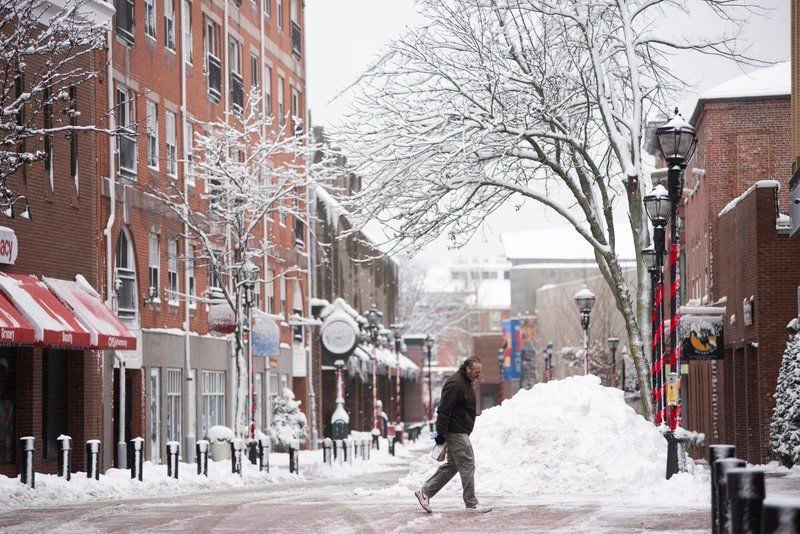 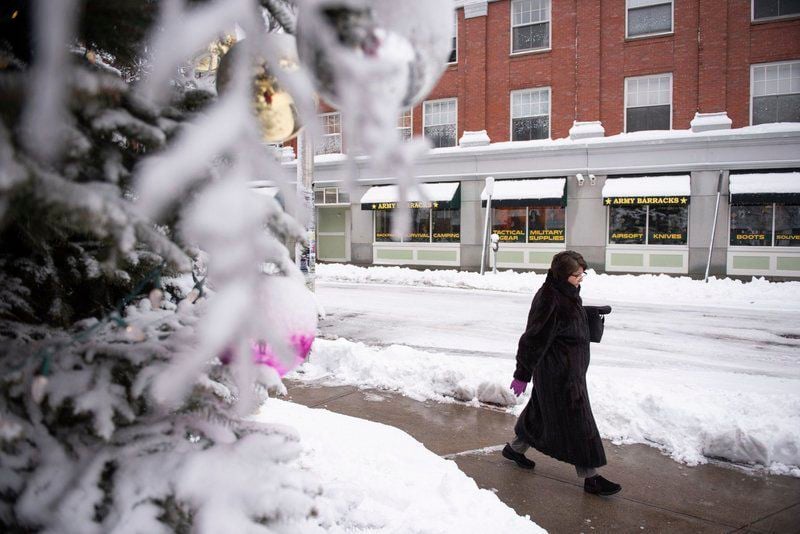 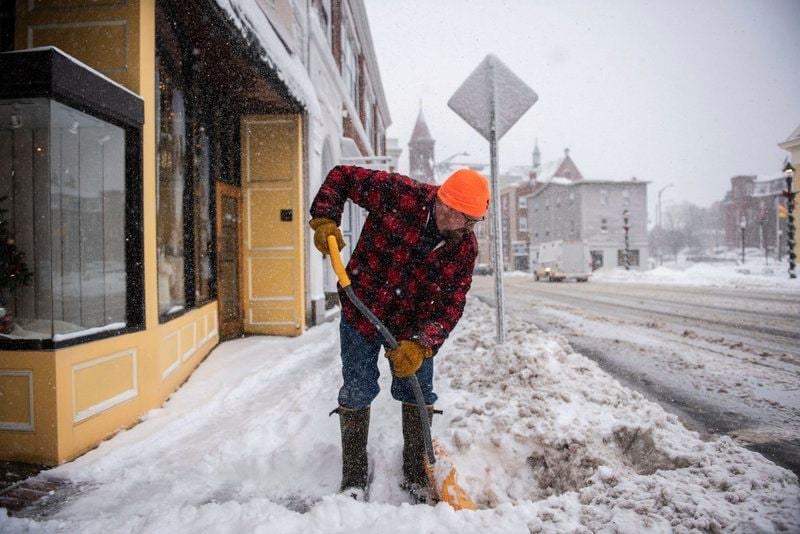 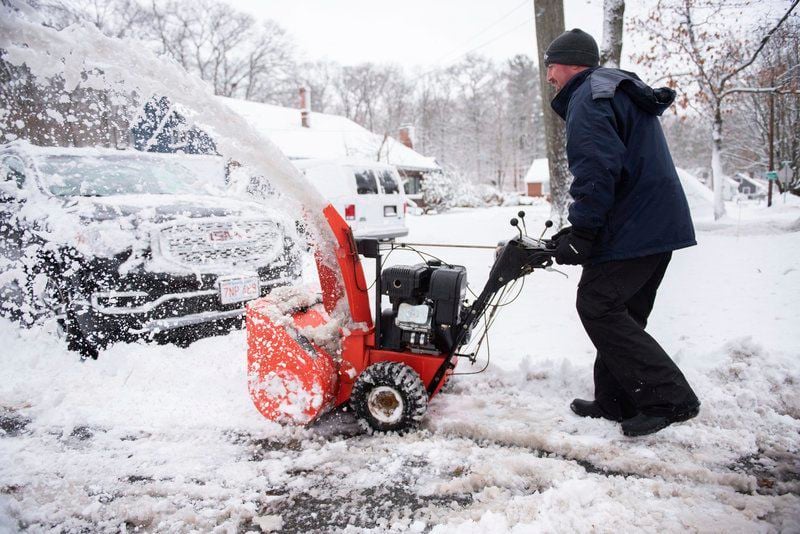 RYAN MCBRIDE/Staff photoJordan Colton uses a snowblower to clear his driveway on Brimbal Avenue in Beverly. 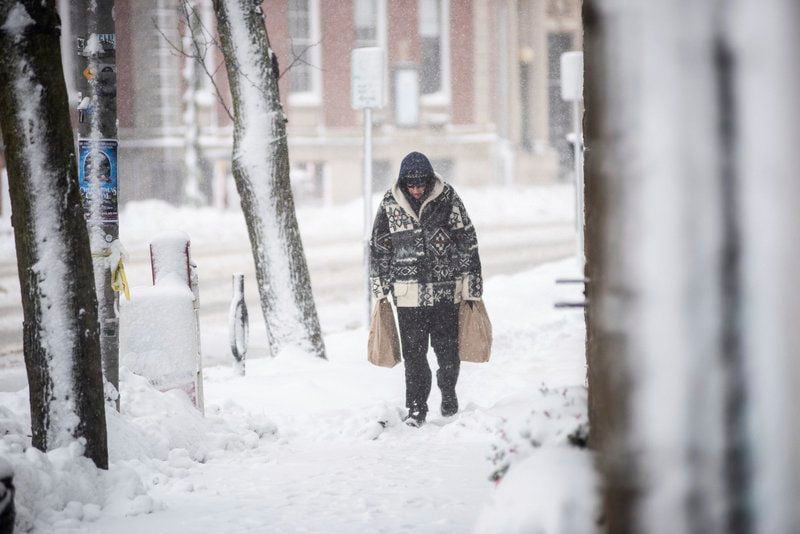 RYAN MCBRIDE/Staff photoA shopper carries bags on Cabot Street in downtown Beverly during Tuesday's snowstorm, the first of the season. 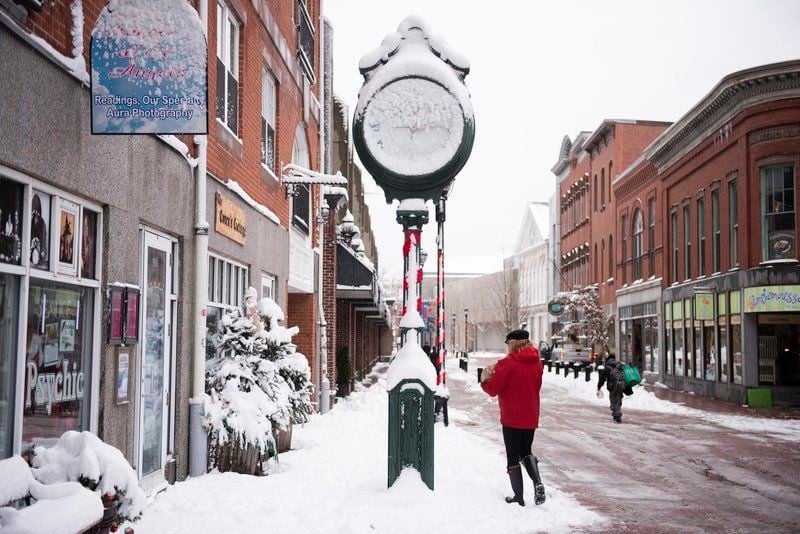 RYAN MCBRIDE/Staff photoJordan Colton uses a snowblower to clear his driveway on Brimbal Avenue in Beverly.

RYAN MCBRIDE/Staff photoA shopper carries bags on Cabot Street in downtown Beverly during Tuesday's snowstorm, the first of the season.

An unseasonably early round of snow gave Public Works crews around the North Shore some homework to tackle before winter officially begins Dec. 21.

Snowfall amounts varied from two-day storm, with coastal communities getting between 5 to 10 inches and towns farther inland getting more, according to various reports.

"Taking into account when the rain changed to snow and so-forth, it turns out we got 7.8 inches," said Arthur Francis, a retired Salem meteorologist.

"As far as the wet amount, the water content was 2.15 inches. So if we were to have that as all snow here, it would've been 25 inches of snow."

A lot of the gradient between the 8 inches hitting Salem and, say, the 10 inches measured in Peabody came down to the temperature of the ocean, according to Francis. As such, much of the moisture landing on Monday came in the form of rain.

"The water temperature is still fairly warm. I think it's 48 (degrees) out there right now," Francis said. "What's unusual (about the storm) is it's the first couple days of December."

The storm provided an early trial for parking ban changes in Salem, where officials announced in October that most school parking lots were going to be off-limits for overnight storm parking. The move came amid an effort to shield the school district from unnecessary snow days when storms are over and roads are clear but parking lots are still a mess due to parking usage.

"I think it went well," said Dave Knowlton, the city's public works director. "In all the different areas we identified (as new parking areas), we had some parking. Some areas were used more than others, but it seemed like people were cooperating with what we were trying to do. They stayed in the areas we designated."

Salem police reported, on the other hand, that 106 vehicles were towed Monday night for violating the on-street snow parking ban.

School operations weren't impacted either way as Tuesday sessions were cancelled early Monday evening. But city officials were noting where residents were leaving cars — and more importantly, where they weren't.

"We may look at some of the areas that weren't utilized as much as we thought they'd be utilized, and maybe reduce the amount of parking we provide there," Knowlton said. "Or we may possibly eliminate it. But it may be too soon to make those kinds of decisions. We need a couple storms under our belts to understand what we can do."

The parking ban announced in Beverly created some problems for Garden City crews, but the problems were nothing out of the ordinary, according to DPW head Mike Collins.

"Based on the number of cars I see on the street, it was pretty poor compliance with the parking ban," Collins said. "It's hard enough as is, but it really makes things difficult when people don't move their cars."

Collins attributed some of the problem to new residents who moved in throughout the year and have "never lived in Beverly before." As such, newer residents likely not up to speed on the so-called "blue-light specials" that indicate the presence of a parking ban, he explained.

"This appeared to be widespread ignoring what was going on, and that's the problem," Collins said. "The first ticket usually gets their attention, but we don't take any pleasure in doing that."

Beverly police, who do not tow parking ban violators, reported 57 vehicles were ticketed for ignoring the ban.

The slow roll of the storm also proved challenging for area businesses and offices. Several delayed openings, while some called the day a wash altogether — including town government in Danvers.

Although much was shuttered in Danvers, the late-autumn storm's damage could have been worse.

"I wouldn't describe this as an impactful storm in terms of damage or power outages," said Danvers Town Manager Steve Bartha. The parking ban there, meanwhile, "worked as designed."

The newly opened North Shore Crossing plaza on Brimbal Avenue also dealt with an issue in the storm, when a private plow struck a gas regulator behind one of the retail buildings at about 2:30 a.m., causing a leak.

The Beverly Fire Department and National Grid were notified and responded quickly.

Beverly Fire Lt. Chad McCormack said the entire area was cordoned off and everyone — primarily snow-removal personnel and employees of the Sunoco and Gulf stations  on the other side of Brimbal Avenue — were evacuated.

National Grid shut off the gas, and the gas, assisted by strong and gusty winds, dissipated quickly. Firefighters made a comprehensive check of the entire area for pockets of remaining gas, and were able to clear the area within an hour and a half.

Lt. McCormack said only areas that might be affected by a loss of gas Tuesday were  a relatively limited area still under construction.

It remains unclear how the incident affected businesses in the plaza. Further details weren't available from the city's building department Tuesday afternoon.

Also unclear is how long the snow will last, or whether it will melt before Christmas, according to Francis. Snow is in the forecast for later in the week, but so are warmer temperatures.

"Things change so often, and we have to keep looking up in Canada and that area up there," Francis said. "If we get one of those outbreaks, like a polar outbreak... right now, I don't see that."