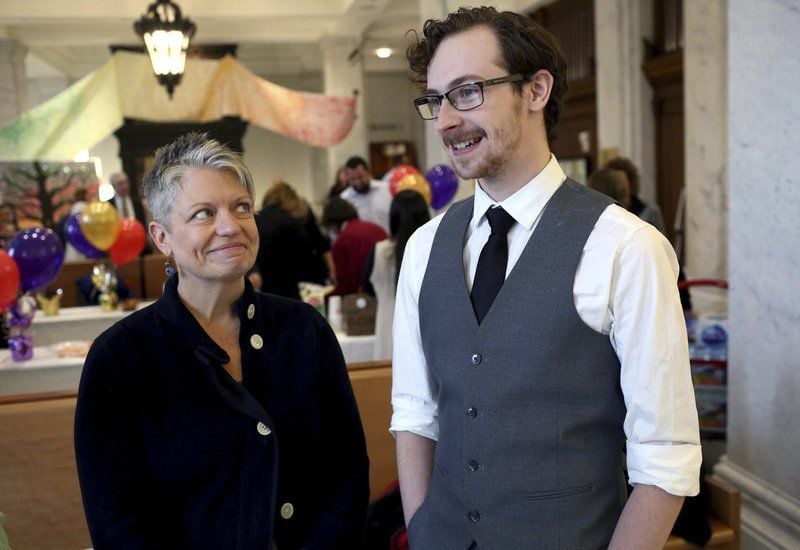 HADLEY GREEN/Staff photoCody DePuis, 22, speaks about his experience in foster care next to his adoptive mother, Joyce Prior of Salem, at National Adoption Day at the Probate and Family Court in Salem. 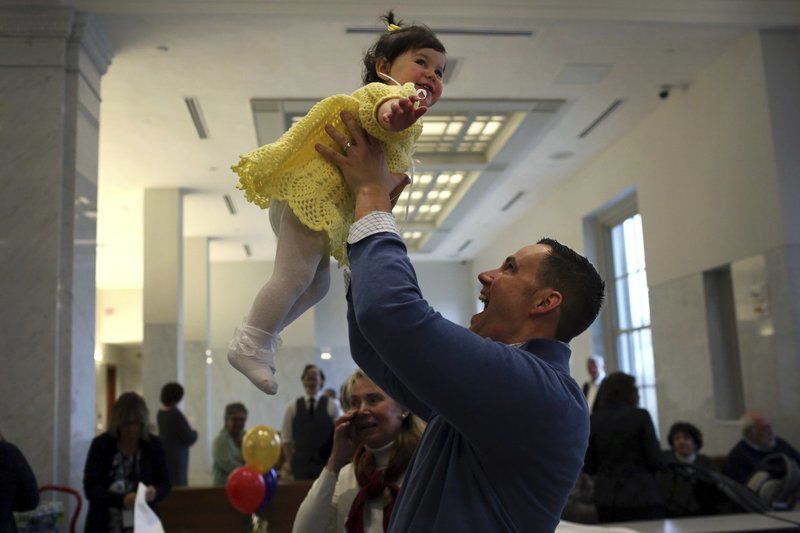 HADLEY GREEN/Staff photoMatt Samalis of Swampscott holds his newly adopted 1-year-old daughter, RoseMarie, at National Adoption Day at the Probate and Family Court in Salem. Seven families from throughout the area finalized and celebrated their adoptions Friday at the courthouse. 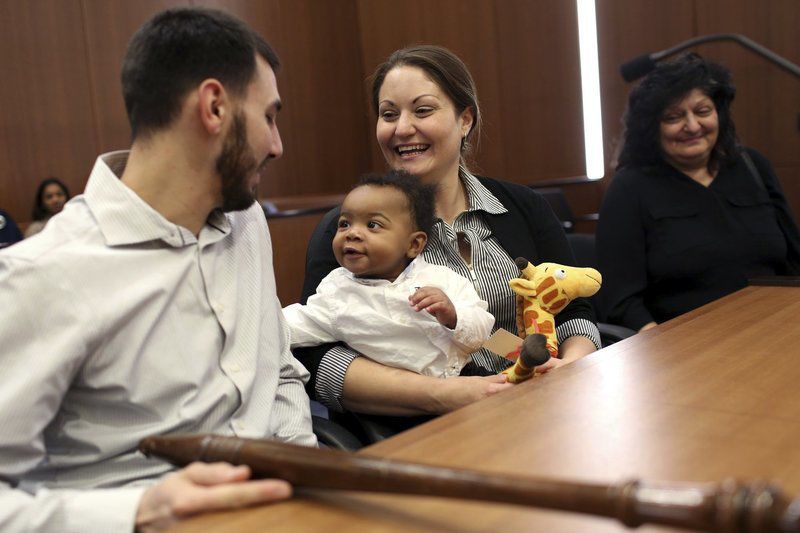 HADLEY GREEN/Staff photoAmanda and Robert Mogauro of Peabody hold their newly adopted son, Tyler, at National Adoption Day at the Probate and Family Court in Salem. 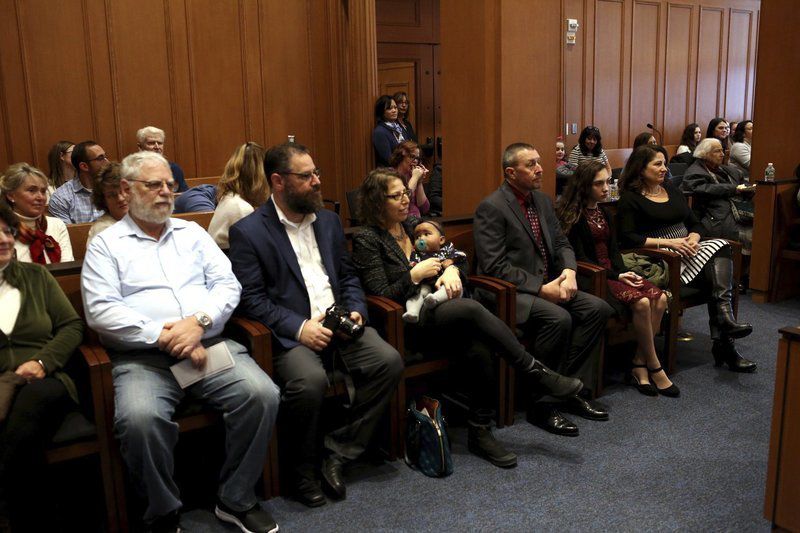 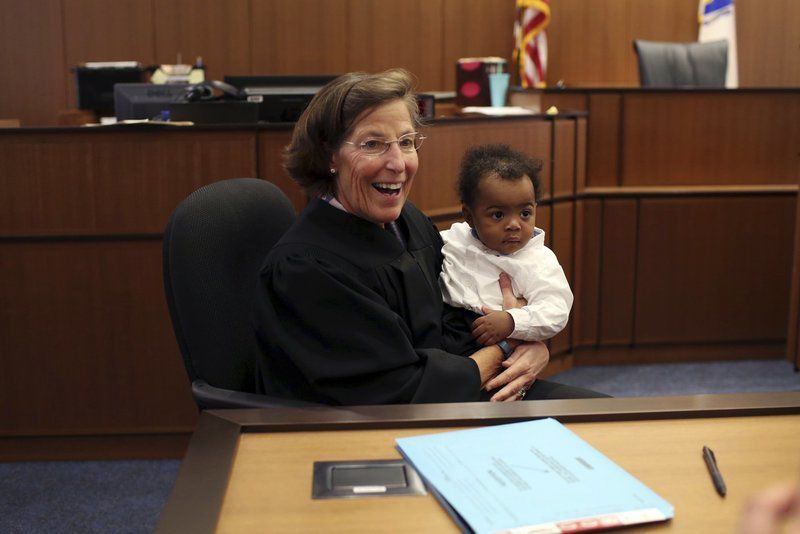 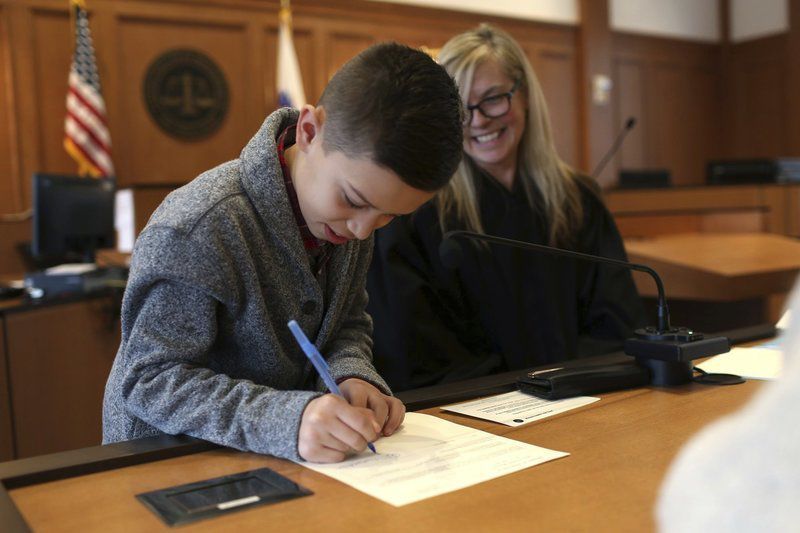 HADLEY GREEN/Staff photoCody DePuis, 22, speaks about his experience in foster care next to his adoptive mother, Joyce Prior of Salem, at National Adoption Day at the Probate and Family Court in Salem.

HADLEY GREEN/Staff photoMatt Samalis of Swampscott holds his newly adopted 1-year-old daughter, RoseMarie, at National Adoption Day at the Probate and Family Court in Salem. Seven families from throughout the area finalized and celebrated their adoptions Friday at the courthouse.

HADLEY GREEN/Staff photoAmanda and Robert Mogauro of Peabody hold their newly adopted son, Tyler, at National Adoption Day at the Probate and Family Court in Salem.

SALEM — Amid the babies and toddlers, all dressed up, Cody Dupuis stood out.

He’s 22. And just like the babies and toddlers and a couple of older children, Dupuis was also dressed up. That’s because he, too, was being adopted on Friday.

“We’re making legal what’s already there,” his mom, Joyce Prior, said. And just to make it clear, what was there was “just so much love.”

Dupuis was in the state’s foster care system when he went to live with Prior and her wife, Donna Blume, in Salem, at the age of 12.

“When Cody came to us, he just fit,” said Prior.

“He was meant for us,” said Blume. “He’s an awesome, awesome young man.”

And now that he’s “aged out” of the foster care system, they wanted to make sure he’s always, legally, their son.

They were among the seven newly minted families at Salem Probate and Family Court on Friday, taking part in a ceremony to mark National Adoption Day.

It was one of several events around the state. Unlike the events at several other courthouses, which were specifically geared to children being adopted out of the state’s foster care system, the event in Salem included private adoptions.

There were several reasons why it took a decade for Blume and Prior to formally adopt Dupuis, but during that time, “We learned how to be a family together.”

For the Salem couple, who had also cared for 15 other foster children over the years, their goal was always to adopt a child. But at their ages (in their 40s and 50s), they wanted a teenager.

At the other end of a parenting journey were Matt and Jennifer Samalis of Swampscott, with their 13-month-old daughter RoseMarie.

RoseMarie, dressed in a yellow crocheted sweater, was adopted through Wide Horizons as a newborn after her birth mother chose the Samalises to raise her. Jennifer was in the room when RoseMarie was born.

In a building where the usual business is grim — divorces, custody fights, will disputes and guardianships for the disabled or elderly — this event brings joy.

“This is the best day for us,” said Register of Probate Pam Casey O’Brien. “It’s a happy day. It’s a day of celebration.”

O’Brien pointed up at a railing where part of a very long banner hung over the edge. It was an Adoption Day scroll, featuring a rainbow of handprints made by students from the Clark School in Rowley.

Ali Lynch, 18, of Beverly, a junior at the school, said she spent about three hours a day on the project. “It took a few days,” she said, explaining how her fellow students all joined in adding their handprints.

Art teacher Jeph Ellis said they chose a rainbow of colors to show that it includes everybody, and handprints “because everybody’s got one.”

“The oldest known art are handprints,” Ellis said. He bought a 150-foot roll of paper, expecting to use about half. Instead, the banner is 130 feet long, and stretched all the way around the second floor of the courthouse on Federal Street.

Last year, his students created the Family Tree Mural, which is on display in the courthouse. Every family adopting a child there is invited to add a leaf.

The adoptions taking place in Salem represented a wide range of experiences and circumstances, said Debbie Noyes, the court’s adoption coordinator, who organized the event.

One couple was adopting the daughter they brought home from China.

In another courtroom, Christopher Mazzotti was formally adopting his wife’s son from a prior relationship, 10-year-old Jack.

First Justice Jennifer M.R. Ulwick pulled up a seat at a table where Jack sat with his parents. In front of him were folders filled with important documents for them — Jack included — to sign. But first, Ulwick wanted to get to know him.

The two chatted about school, where Jack’s favorite subject is social studies, and about plans for a cake when he got home. The judge read the formal-sounding paperwork, with lines like, “From this day forward.”

Then Jack had to sign it to make it official.

After that, he got to bang the judge’s gavel. His younger brother and sister also banged the gavel.

Valerie Mazzotti, of Haverhill, said the couple, who have two other children together, have always hoped that Christopher could legally become Jack’s father. Recently, that became possible.

Speakers at Adoption Day included social worker Jennifer Eckert, founder of Boston Post Adoption Resources, whose book was given out to parents.

Elizabeth “Betsy” Russell, 63, of Danvers, a manager at the Clark School in Rowley, brought along the school’s therapy dog, Riley (who of course, as a dog, was also adopted).

Russell, another of the speakers on Friday, discussed her own experience. She was adopted in 1956, when she was 21/2 months old. “I think it was here in this building,” she said.

In that era, nearly all adoptions were closed, shrouded in secrecy. And she was fine with that. “I had a great childhood,” she said.

But as a young woman, she grew increasingly curious, eventually working up the courage to walk from her Salem apartment across the street to the courthouse, when she was 23. “I just had an empty space inside of me,” she said.

In 1980, she met her birth mother for the first time. “I realized if she had kept me, my life would have been vastly different.”

Years later, she would also gain access to her adoption file, learning just how difficult her birth mother’s circumstances were at the time.

“I realized my birth mother, Shirley, giving me up for adoption was not her rejecting me,” said Russell. “Ultimately, she gave me the greatest gift, the gift of a better life.”