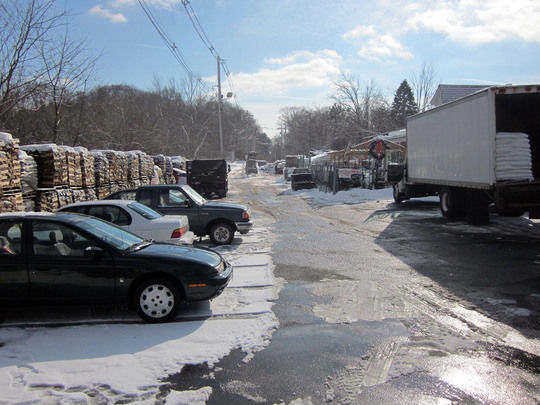 This parking lot at the Agway store in Danvers sits along the right-of-way for the rail trail. The owner of the store, Danny Wildes, says if he loses the ability to use the right-of-way, he could be forced out of business. 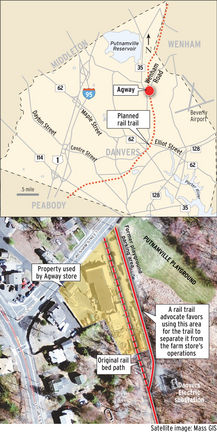 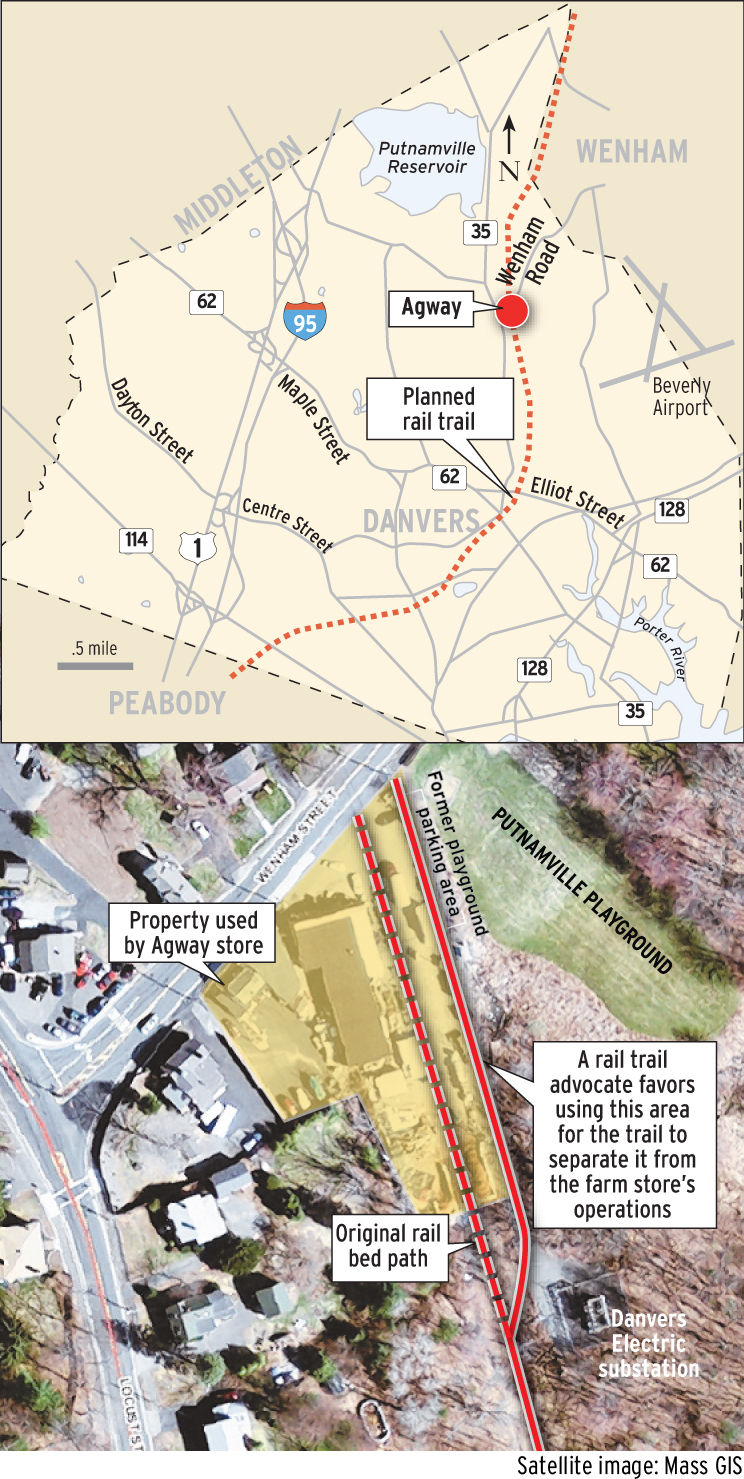 This parking lot at the Agway store in Danvers sits along the right-of-way for the rail trail. The owner of the store, Danny Wildes, says if he loses the ability to use the right-of-way, he could be forced out of business.

DANVERS — The woman who is driving the rail-trail project wants Danvers Agway to get its trailers, trucks and firewood off the public right-of-way, but the store owner says losing his yard would put him out of business.

Over the decades, after the trains stopped running, the Wenham Street farm store's operations spilled onto an abandoned MBTA railway that once passed by its loading dock, said Ingrid Barry, a member of the Danvers Rail Trail Advisory Committee.

Not only that, Barry said, the store operations have apparently encroached onto town-owned land, what was once a parking lot for the Putnamville Playground next door.

The store has completely taken over the area up to the playground fence. The public property is occupied by landscape-equipment trailers, pallets of firewood, and parked cars and trucks.

"One just doesn't take over town land just because you need it," Barry said. "If we all did that, we would be in a heck of a pickle."

Barry hand-delivered a letter to owner Danny Wildes, 46, of Rowley last month explaining her concerns. She said she's not advocating for a path straight through Wildes' yard, but she does want to push him back with a fence, reclaiming town land.

"It's too dangerous to have families walking through there," Barry said.

For Wildes, the move would be too much.

"Ingrid is trying to make it where she forces us out of business," he said.

Wildes said he got verbal permission to use town land 20 years ago.

"I had a gentleman's handshake with the Danvers Electric to use that property, and I have been using it ever since," Wildes said, declining to name the person he spoke with.

"I have no information on it," Barry said.

Wildes plows a path to allow Danvers Electric crews access to gear stored at the site of a former electric substation at the back of the property.

Wildes said he has no objection to rail-trail users simply walking through the storage yard. They have been doing so for years, he said.

"I think the simple solution is to let them come through here," he said.

The Nevada-based Iron Horse Preservation Society, a nonprofit, began building the trail last year. Barry, who's also president of the Danvers Bi-Peds, a group that promotes bicycling and walking, got the project rolling. She said she approached Wildes as a private citizen, not in any official capacity.

"I just think I would speak as a citizen, and the selectmen are taking it up, and I'm sure they will come to a resolution with him," Barry said.

Selectman Bill Clark mentioned the rail trail at the board's meeting on Jan. 18 when he asked Town Manager Wayne Marquis if the trail could be included in a secret meeting Feb. 1 with the town counsel to discuss potential litigation.

Senior Planner Kate Day said the issue of encroachment eventually will go before selectmen, but first the committee is going to focus on the trail's completion in the spring.

"Certainly, encroachment on town lands are a matter for selectmen," Day said.

Barry said trail advocates are trying to make as little impact as possible on the two businesses that encroach.

The other major encroachment on the trail is a parking lot of the office of Dr. Paul Corrado, a dentist on Poplar Street. Barry said the landowner had long ago obtained permission from the MBTA to bump out the parking lot over the rail bed while it was not being used. She said the business can simply change how spaces are configured to allow the trail to pass.

Wildes said he does not want to fight Town Hall; instead, he wants to coexist with it.

"I know whose is whose and what is what, I just want to get it behind me," Wildes said.

Staff writer Ethan Forman can be reached at 978-338-2673 or by e-mail at eforman@salemnews.com or on Twitter @DanverSalemNews.