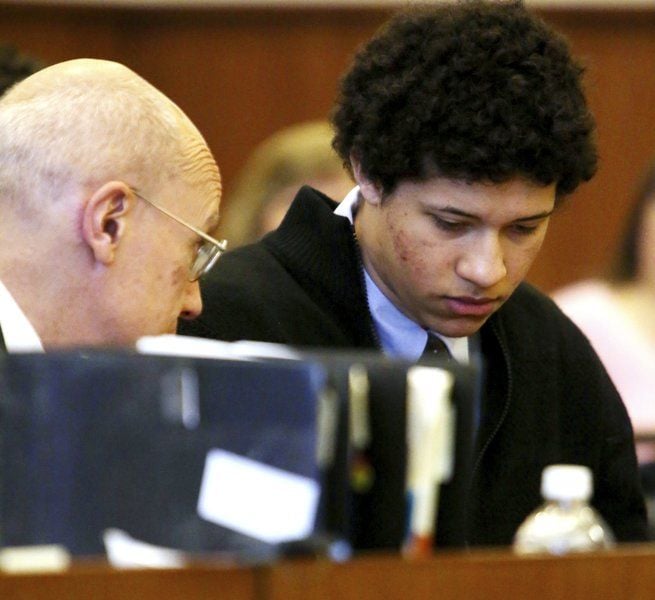 Philip Chism at the motion to suppress hearing at Salem Superior Court. 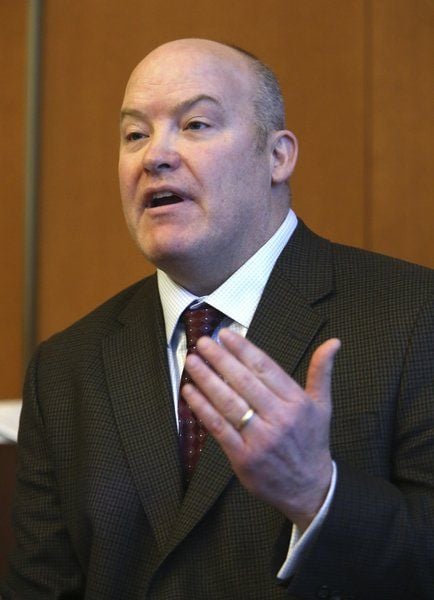 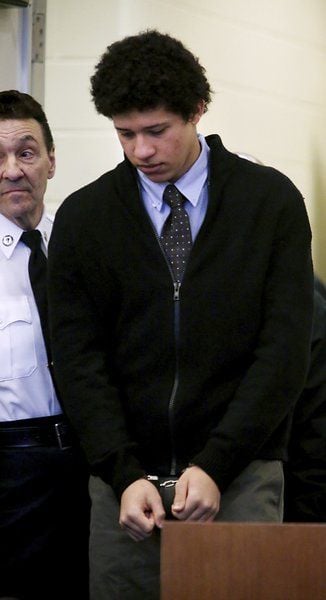 Philip Chism is led into Salem Superior Court for the motion to suppress hearing.

Philip Chism at the motion to suppress hearing at Salem Superior Court.

Philip Chism is led into Salem Superior Court for the motion to suppress hearing.

DANVERS — Philip Chism told investigators that he cut Colleen Ritzer just once with a box cutter, and denied raping her.

But a state trooper testified Thursday that Ritzer, 24, had been stabbed 16 times in the throat, and raped twice, before being left in the woods near Danvers High School, under a pile of leaves and sticks.

And there was evidence that she had been raped twice.

In graphic testimony, state troopers detailed what they found in the early morning hours of Oct. 23, 2013, as they came across the body of Ritzer, Chism’s ninth-grade math teacher at Danvers High School.

“I remember holding a light on that area and making a remark, ‘This area looks like it’s been disturbed,’” said Lt. Michael Holleran of the State Police crime scene services division, who testified about the search for Ritzer in the woods near Danvers High School.

A colleague spotted something in the leaves. She pointed it out to him. “I moved over and I observed a toe sticking up out of the leaves.” It was painted with pink nail polish.

“At that time when I saw the wound to her throat area, my own personal belief was that she had expired,” Holleran testified under questioning by prosecutor Kate MacDougall.

The testimony came during the third day of a hearing on a motion by the defense to suppress evidence and Chism’s statement to police. The hearing will conclude Monday when Judge David Lowy hears arguments from a prosecutor, who opposes the motion, and the defense.

Chism’s lawyers are arguing several issues, and among those is whether Chism, then 14, was improperly coerced into making the statement. They’re also arguing that Chism’s state of mind that night did not make him capable of waiving his rights. Much of Thursday’s testimony focused on those two issues.

‘Trying to get information’

Trooper Steve Buccheri testified that before he and Danvers police Sgt. Phil Tansey went to question Chism, they decided that, “because of his age, we made a decision he was going to be treated age appropriate and he wasn’t going to be bullied or misled in any way, in spite of the circumstances we were under.”

At the time, Ritzer hadn’t been found. “We were going to speak to him and try to get the information,” said Buccheri, who, like Tansey, had a child Chism’s age.

What they encountered that night and learned in the days following still makes Buccheri emotional; his voice broke as he described the results of an autopsy that revealed the extent of Ritzer’s injuries.

Evidence at the scene and DNA testing confirmed that, despite Chism’s claim to the contrary, that Ritzer was raped twice.

Buccheri said there were “a lot of moving parts” to the investigation. Police were “pinging” both Chism’s and Ritzer’s cellphones, finding a signal for his near the Hollywood Hits movie theater and for hers near the Holten Richmond Middle School.

School resource officer Steven Baldassare was scrambling to find surveillance video of Ritzer and Chism on a brand-new system, for which cameras were not labeled by location, but instead by number. At one point the computer crashed.

Initially, investigators thought there might have been a second suspect, because they saw someone on the surveillance video who looked like he had a ponytail enter the girls bathroom.

It was Chism, Buccheri said, and he had donned a balaclava, or ski mask, that was bunched up around his neck.

“Mr. Chism was very definitive that it was him, and the reason it looked like a different person was he had on a balaclava around his neck; it almost looked like a ponytail,” said Buccheri, describing his interview of Chism.

What they knew, when

The defense focused much of its questioning on the timeline of when Ritzer’s body was found in relation to when Chism was questioned, contending that investigators knew more than they let on when they started to ask the teenager about what had happened.

It turned out his watch was seven minutes fast, but it’s unclear what relevance that had to the case.

When she asked Baldassare about the description he’d been given of Chism, MacDougall objected, questioning its relevance.

Regan argued that the information was relevant to probable cause. But the judge was stumped by that argument, admitting he had no idea why she was asking the question.

Regan suggested that it might be relevant to the issue of what police knew when they stopped Chism as he walked along Route 1 in Topsfield. “I think the timeline is fairly fluid here,” she said.

The prosecutor countered that, “I just don’t think the timeline is as fluid as Ms. Regan seems to think, despite efforts to make it seem that way.”

As to Chism’s state of mind, prosecutors entered as an exhibit a recording of an interview with teacher Pamela Foss, who described Chism as quiet but not unusually so.

The day of the murder, she gave a history quiz. “He did a good job on it,” Foss told investigators in the recorded interview. “His mind was there that day for the quiz.”

The defense had already called its only witness, a forensic psychologist, earlier this month. Regan submitted a sheath of materials, including Chism’s school records from Tennessee, which reveal him to have maintained a B or C average in most classes.

Earlier in the day, lawyers for The Salem News and Eagle Tribune, as well as The Boston Globe, argued against a motion filed by Chism’s lawyers seeking to preclude any reproduction of Chism’s interrogation video or a transcript.

Lawyer Peter Caruso called the request, filed Monday, “an interesting side step” and an attempt at a “second bite at the apple” by Chism’s attorneys, who have also appealed Lowy’s denial of their bid to have both documents sealed from public view.

Chism attorney Susan Oker suggested Thursday that in the event that the materials are unsealed, “prohibiting duplication would blunt the impact” of them on Chism’s right to a fair trial.

Lowy suggested that the Supreme Judicial Court’s ruling Tuesday that juror lists are required to be part of the public case file in trials points to a view that the public should have as much information as possible.

But he also suggested that it’s too soon for him to decide the motion because the Appeals Court has yet to rule on the impoundment.

Appeals Court Judge Peter Agnes on Thursday extended the delay in releasing the materials until arguments are made in the case.

Chism: Colleen Ritzer was to blame for own death

DANVERS — Philip Chism had the presence of mind to tell investigators that Colleen Ritzer was responsible for her own death, a prosecutor argu…

DANVERS — Lawyers for accused killer Philip Chism are appealing to the state’s highest court to keep his videotaped confession secret.