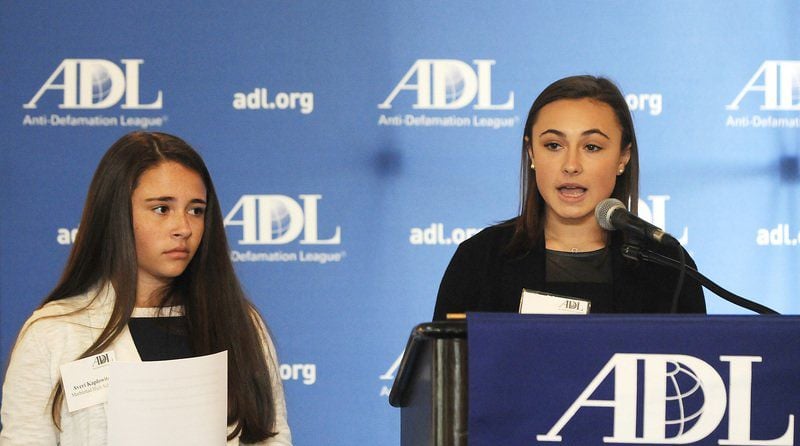 PAUL BILODEAU/Staff photo.Marblehead High sophomores Averi Kaplowitch, left, and Olivia Schauer speak during the Anti-Defamation League's annual Essex County Law and Education Day Event at the Kernwood Country Club in Salem. The girls reached out to the ADL last December for help when they confronted images on social media of swastiskas in photos taken from a room at their school and showing Marblehead students. 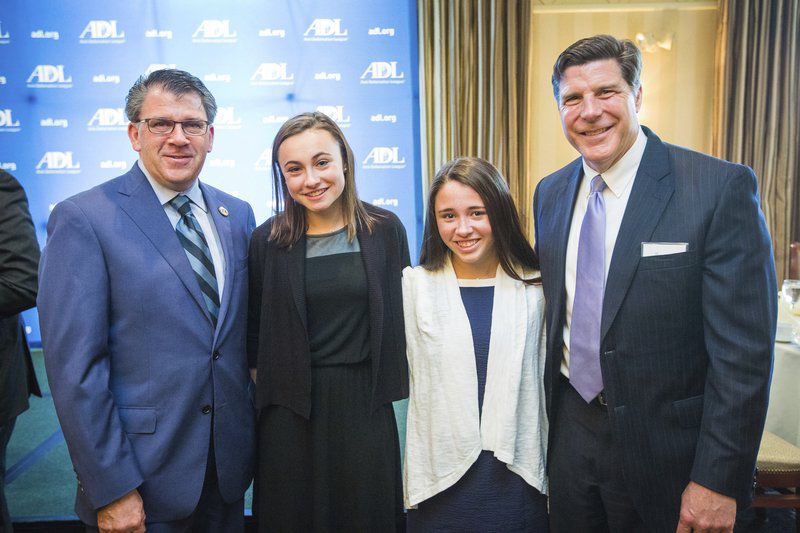 PAUL BILODEAU/Staff photo.Marblehead High sophomores Averi Kaplowitch, left, and Olivia Schauer speak during the Anti-Defamation League's annual Essex County Law and Education Day Event at the Kernwood Country Club in Salem. The girls reached out to the ADL last December for help when they confronted images on social media of swastiskas in photos taken from a room at their school and showing Marblehead students.

MARBLEHEAD — It's a principle voiced by Irish statesman Edmund Burke more than 200 years ago. "The only thing necessary for the triumph of evil is for good men to do nothing."

That goes for good students, too. Last December, when Marblehead High School sophomores Averi Kaplowitch and Olivia Schauer spotted a Snapchat image of pennies arranged in the shape of a swastika, one clearly taken at their school, they might have turned away and tried to ignore it. Even now, Kaplowitch isn't sure the student responsible fully understood the ramifications of such an image.

"I knew about it because I had a great-grandfather who was in the Holocaust," Kaplowitch said. Seeing the anti-Semitic image, symbolic of a regime that dedicated itself to exterminating as many Jews as possible, "It made us feel that we are not safe in our school. ... It was very upsetting. I didn't expect that to come out of someone I considered my friend."

Kaplowitch and Schauer acted. They brought the incident to the attention of their parents, the school administration and then to the Anti-Defamation League. That wasn't easy to do.

"There's not a huge percentage of Jewish students here," Kaplowitch explained. "We were not sure they would understand." They worried over the possibility of being denounced as snitches.

In fact, there were quick and positive responses from several quarters. "It was addressed," said Kaplowitch's mother, Melissa.

The school attended to the student responsible. What's more, Marblehead High has decided to re-establish a tolerance and training program instituted by the ADL, one that had lapsed with a change in school administrators.

"I was pretty happy they took care of it immediately," said Kaplowitch. Marblehead police responded as well. "The police said they would do anything they needed to do to help us."

Additionally, a campaign was launched to produce the funding required to bring back the training program, called ADL World of Difference. The $8,000 was raised via local businesses. The National Grand Bank of Marblehead, via president and Selectman Jim Nye, contributed a major portion of the money.

Nye was on hand Thursday as Kaplowitch and Schauer were recognized at the ADL's annual Essex County Law and Education Day at the Kernwood Country Club in Salem. "It was an awesome, cool event," said Kaplowitch.

"The girls made the right choice," said Penny Hurwitz of the ADL. Her organization will begin by training two teachers, then students. Hurwitz concedes the teens who resort to such hateful symbols often do so with little appreciation of the history behind them and the deep emotions that might be stirred. "I don't think they fully comprehend it," she said.

That fact is exactly why the training is so essential, Hurwitz added. The program addresses all sorts of prejudices and biases, from racism to Islamophobia.

Hurwitz believes that anti-Semitic incidents have become more common in recent years, although she has no statistics yet to confirm that.

"But I'm willing to speculate based on anecdotal evidence that we're seeing an increase in reports," she said, recalling recent incidents in Swampscott, Newton and a previous problem in Marblehead where a swastika was found on playground equipment.

Hurwitz praised the actions of the community in response to the December incident in Marblehead. "These girls are role models for standing up and speaking out and motivating the community," she added. "I applaud them ... They should be commended."

For her part, Kaplowitch recounts no backlash resulting from the decision she made with Schauer to speak out. "Now I feel safer. I'm happy everyone took action and that this program is going to be in the schools."

Sorry, there are no recent results for popular articles.

Sorry, there are no recent results for popular images.

Sorry, there are no recent results for popular videos.