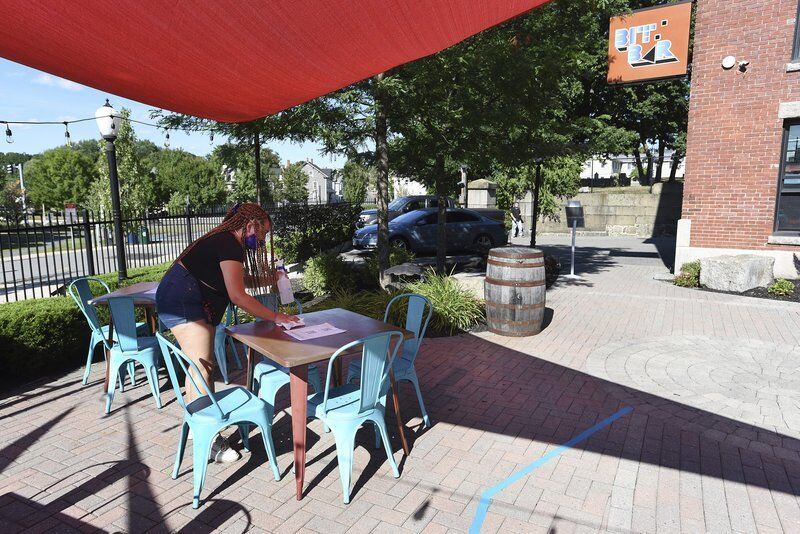 PAUL BILODEAU/Staff photoServer Ilisa Flum cleans an outside table with disinfectant at BitBar in Salem, which is not allowed to have customers use their arcade games due to COVID-19, but they can still serve food. 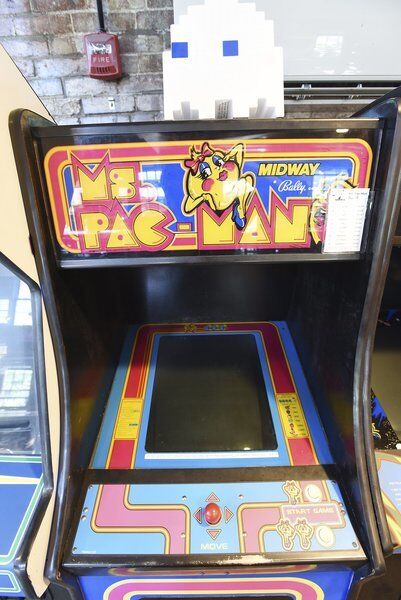 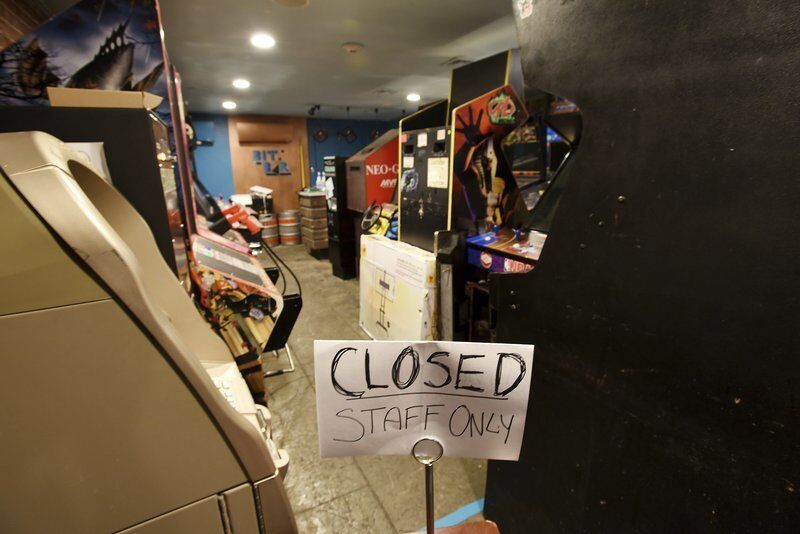 PAUL BILODEAU/Staff photoA backroom, which use to be part of their arcade, now serves as a storage room at BitBar in Salem, which is not allowed to have customers use their arcade games due to COVID-19, but they can still serve food. 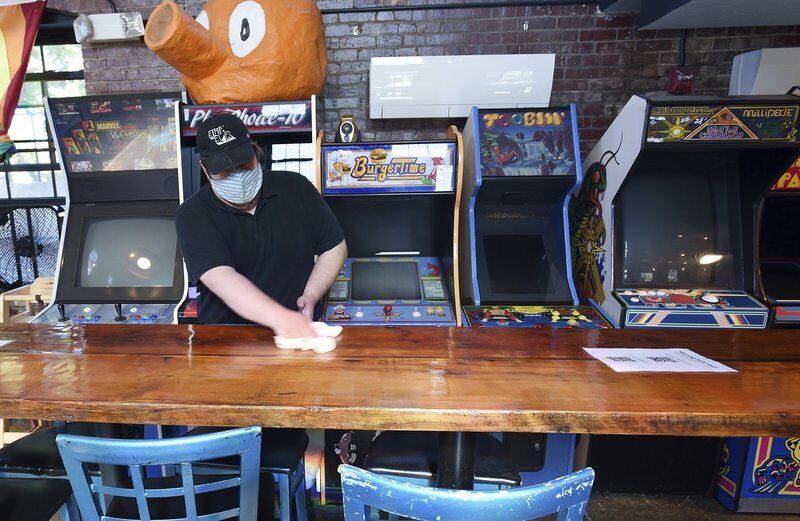 PAUL BILODEAU/Staff photoGeneral Manager Eric Spackman cleans a table in front of a row of off-limits arcade games at Bit Bar in Salem.

PAUL BILODEAU/Staff photoServer Ilisa Flum cleans an outside table with disinfectant at BitBar in Salem, which is not allowed to have customers use their arcade games due to COVID-19, but they can still serve food.

PAUL BILODEAU/Staff photoA backroom, which use to be part of their arcade, now serves as a storage room at BitBar in Salem, which is not allowed to have customers use their arcade games due to COVID-19, but they can still serve food.

PAUL BILODEAU/Staff photoGeneral Manager Eric Spackman cleans a table in front of a row of off-limits arcade games at Bit Bar in Salem.

SALEM — BitBar is open again, but the bits enjoyed alongside the bar have been unplugged.

The same can be said over at Metro Bowl in Peabody, where the arcade games, birthday parties and other major parts of the business have been put on hold during the ongoing COVID-19 pandemic.

Throughout the North Shore, entertainment businesses are redefining their offerings in a bid to reopen in and survive the pandemic.

Both BitBar and Metro Bowl reopened recently, employees at the businesses said. But when guests stepped inside either space for the first time since March, the businesses they walked into weren't the same as they were before the pandemic.

For the unacquainted, BitBar is a hybrid video game arcade and dine-in restaurant that opened in 2016. Colorful drinks, a full menu and LED-lit cubes have been paired with the likes of quarter-per-play Ms. Pac Man and Street Fighter, impromptu games of NFL Blitz and a line of pinball machines awaiting guests in the back.

Now, most of the machines are packed into that back gaming area of BitBar just collecting dust. A row of disabled machines still exists in the main restaurant, quietly waiting for the day they get turned back on.

"A couple days before Phase 3 (in the state's reopening plans), they silently moved arcade games to Phase 4. We say silently, because it wasn't in the press conference. It was just on the list," said Rob Hall, co-owner of BitBar off Bridge Street in Salem. "It took us a while before it fully sank in, and we were trying to find out what other places were doing.

"Ultimately, by talking to the Board of Health and them inquiring with the state, we were told we can't reopen with games right now — arcade games," Hall continued. "Then it took us a little while to kind of recover from that and plan what we were going to do — and we ultimately did reopen, without games. We do have a nice patio."

BitBar reopened two weekends ago with one addition amid the subtracted games: Dogs are now allowed on the outdoor patio.

"We're right across the street from a lot of residential buildings, so we're hoping to get the word out that we have an awesome, dog-friendly patio, and we have a full bar with an interesting and fun cocktail program," Hall said. "But what does the future hold? I don't know. We're just taking it week by week at this point."

Much the same can be said at Metro Bowl.

"We just got opened this week," said Bob Leo, Metro Bowl's manager. "Bowling was in Phase 3."

In Metro Bowl's case, capacity and the actual number of usable bowling lanes have been cut in half to keep groups of bowlers physically distanced. Equipment is also routinely sanitized to keep customers safe, according to Leo.

But bowling is just part of Metro Bowl's business. A full-scale restaurant surrounds a large bar, and there's a full arcade and spaces generally reserved for birthday parties.

The situation has led some arcade game operators to criticize the state's reopening plans. While arcade cabinets were put on hold in Phase 3, gaming systems at casinos were allowed to go forward. That has led some businesses to seek out local state lawmakers for help.

"We did have a meeting with the Executive Office of Economic Development, with BitBar and other arcade owners," said Sen. Joan Lovely, of Salem, "and it was explained that they would take these conditions under consideration — but currently, the governor is watching the science and the data on how businesses continue to reopen."

Lovely said she's reached out to the state "several times, and we had this meeting last week and are hoping to get something positive back... but it's also Salem. And Salem is in the red."

Salem isn't just in the red — it's getting worse. The city was put under a "red" category of high-transmission communities last week after showing an average of 8.3 new cases daily per 100,000 people. Updated data Wednesday showed that number increasing to 10.47 cases per 100,000 people. The state's threshold from yellow (moderate risk) to red is a rate of 8.0 or higher.

Lovely said she still has hope, however. She anticipates the state will respond next week on "whether it'll be, 'no, we're going to keep things the same.'"

"The state's Executive Office of Economic Development was very grateful to get the feedback," she said. "This is the type of feedback they need, that they can take back to the committee as they consider reopening Massachusetts."