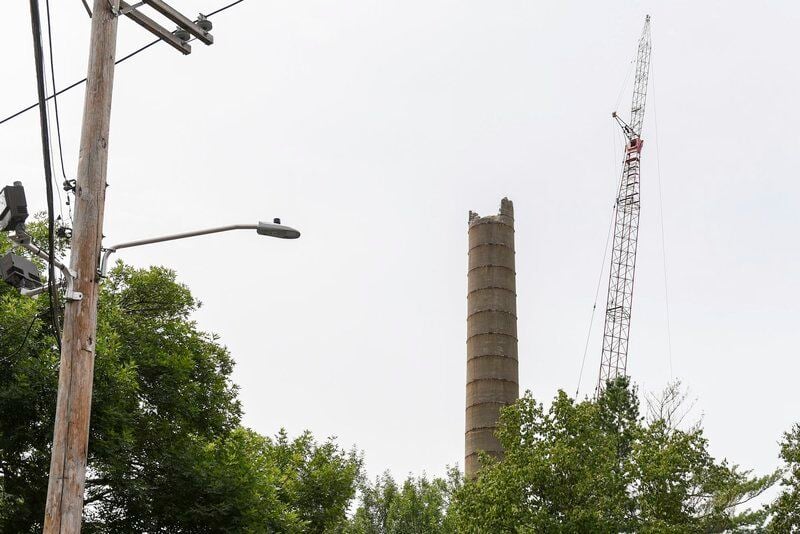 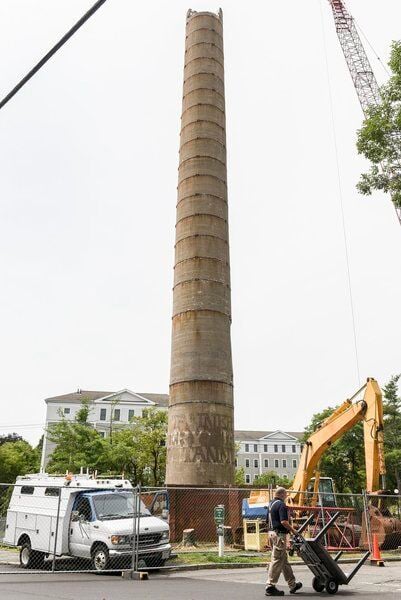 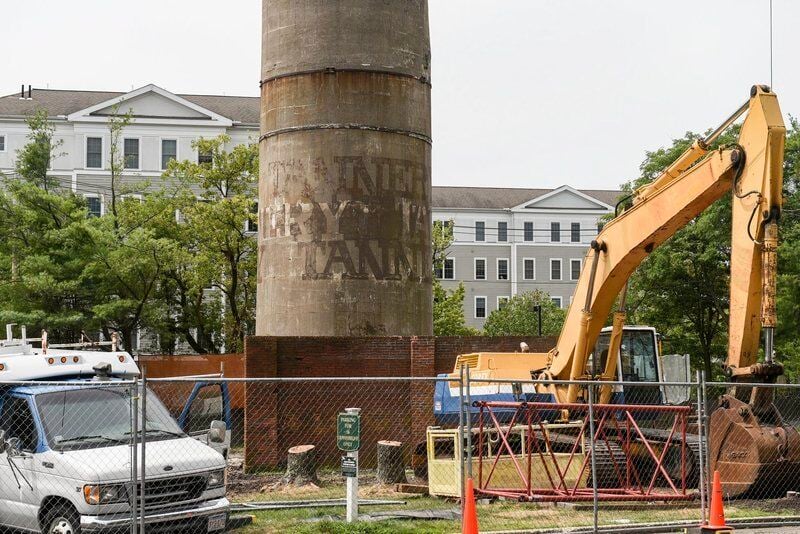 PEABODY — The concrete smokestack of the former A.C. Lawrence Leather Company, which has loomed over Peabody Square for more than a century, is slowly being knocked down with a wrecking ball due to its hazardous condition.

The 225-foot stack pipe, which a local historian says was built sometime after 1894, sits along Crowninshield Street nestled among the former tannery buildings that were converted into affordable housing in the 1970s.

Matthew Curtin, the project director for WinnDevelopment — which acquired that complex, known as the Tannery I Apartments, last year — said the stack pipe had deteriorated to the point where chunks of concrete could fall off and injure someone below.

The $350,000 project will demolish the smokestack to a height of 10-feet, Curtin said. The site around what’s left will be landscaped and a plaque will be installed to commemorate the history of the smokestack and the surrounding tannery.

Curtin said a structural engineer conducted a thorough evaluation of the condition of the chimney, which included the use of a drone to take photos.

“The results were not great,” he said, adding that the stack pipe was in “rough shape,” and posed a hazard. While it was not in danger of collapse, chunks of concrete could fall off and strike someone below. The steel bands around the exterior “are in pretty rough shape,” he said.

The real estate development company looked into the cost of restoring the smokestack to a safe condition, and that was estimated at $700,000 to $800,0000.

Tannery I is an affordable, mixed-income housing community of 284 apartments, 235 of which are restricted as affordable, and 49 can be rented at market rates.

It’s presently undergoing a multi-million rehab after WinnDevelopment, the real estate development arm of Boston-based WinnCompanies, acquired the sprawling former tannery complex at 18 Crowninshield St. last year for nearly $36.2 million. The deal preserved the affordable housing component for low-income residents for the next 40 years, as the original state subsidy used to convert the tannery into housing had expired.

Curtin said it did not make financial sense to invest in a full chimney restoration, because it would be robbing money from the rehab of the apartments and the buildings.

Since Winn has bought the property, the buildings have gotten new roofs, and crews were in the process of installing new windows, work that has stalled due to the pandemic, due to supply chain issues and concern about workers going into people’s apartments.

Apartments are also getting new kitchens and baths, and corridors are being refurbished. A centrally-located, three-story building, which has functioned as an office, will eventually be renovated to provide a club room and other amenities.

Still, the cost to take down the smokestack was not cheap, about $350,000, Curtin said.

In layman’s terms, he said, the demolition contractor is doing a controlled demolition, using a wrecking ball to chip away at it. The demolition started about two weeks ago and the work has been “pretty anti-climactic.”

Crowninshield Street has been closed off except to local traffic; a perimeter around the stack pipe has been fenced off.

The plan is to take the smokestack down to 10 feet in height and cap it. It should take four to five weeks to demolish most of it.

Debby Eskenazi, a member of the Peabody Historical Commission, said the commission got involved a couple of months ago after the stack pipe demolition was permitted.

“Technically, it’s not a historical marker, but it’s on historical property,” she said. The commission met with Winn to come up with a way to commemorate the site and preserve some green space.

“They are fabulous to work with, they are such a great bunch of people,” Eskenazi said.

Retired Peabody High teacher and local historian Andy Metropolis said A.C. Lawrence had a big leather factory in Boston, which suffered a major fire in the 1870s. The company ended up moving to Peabody in 1894, so the stack pipe was built sometime after that in the 1890s.

“It’s been there ever since,” Metropolis said.

“A.C. Lawrence Leather Co. is what put Peabody on the map in the leather industry, and is largely responsible for why the city was called ‘The Leather Capital of the World,’” according to Peabody Historical Society and Museum Curator Kelly Daniell.

“Since Arthur C. Lawrence’s arrival in Peabody in 1894, and the subsequent construction of the tannery complex on Crowninshield Street, the building and stack pipe have been a visual reminder of the industrial period during which the city grew exponentially,” Daniell said. “A.C. Lawrence eventually had 3,000 employees, three large plants, and was the largest taxpayer in Peabody up until the building of the Northshore Shopping Center.”