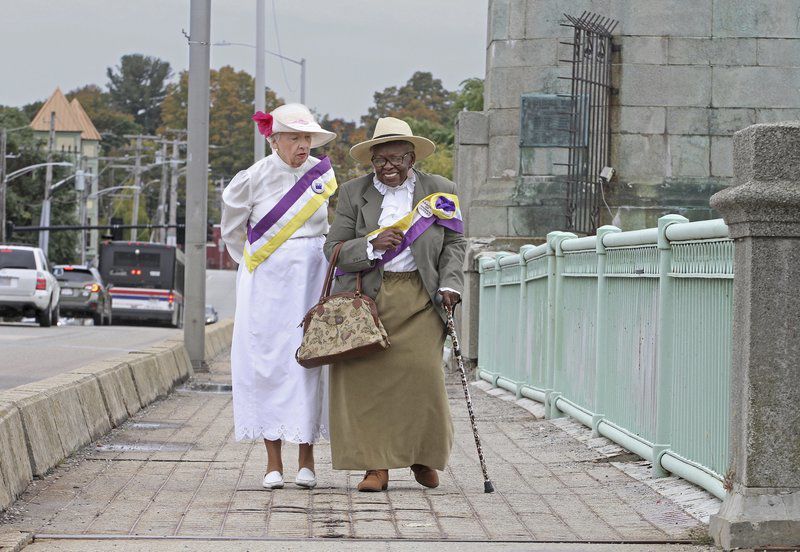 MIKE SPRINGER/Staff photosKay Herlihy, left, and Kalister Green-Byrd walk across the Basiliere Bridge over the Merrimack River. The two women are organizing an Oct. 20 reenactment of the historic 1914 women’s suffrage march in Haverhill. 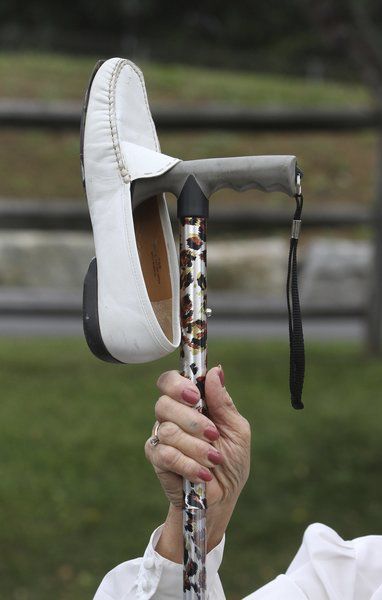 Kay Herlihy holds her shoe on a cane, just as Haverhill women did a century ago as part of the Slipper City Suffragettes march. 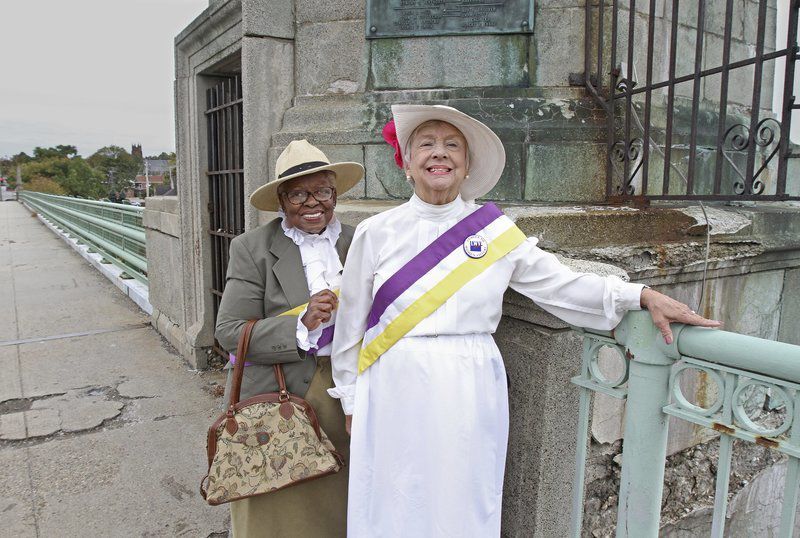 MIKE SPRINGER/Staff photoKalister Green-Byrd, left, and Kay Herlihy stand on the Basiliere Bridge over the Merrimack River. They are organizing an Oct. 20 reenactment of a 1914 women’s suffrage march in Haverhill.

MIKE SPRINGER/Staff photosKay Herlihy, left, and Kalister Green-Byrd walk across the Basiliere Bridge over the Merrimack River. The two women are organizing an Oct. 20 reenactment of the historic 1914 women’s suffrage march in Haverhill.

Kay Herlihy holds her shoe on a cane, just as Haverhill women did a century ago as part of the Slipper City Suffragettes march.

MIKE SPRINGER/Staff photoKalister Green-Byrd, left, and Kay Herlihy stand on the Basiliere Bridge over the Merrimack River. They are organizing an Oct. 20 reenactment of a 1914 women’s suffrage march in Haverhill.

HAVERHILL — Haverhill reenactors wearing long dresses and big hats will march over the Merrimack River next week, evoking the history of century-old struggles for women to win the right to vote.

Retired Haverhill teachers Kalister Green-Byrd and Kay Herlihy will be at the forefront, their vintage garb draped in purple and yellow sashes signifying membership in the League of Women Voters of Greater Haverhill, the parade’s host.

Green-Byrd, Herlihy and fellow marchers will revisit the historic May 2, 1914 Haverhill suffrage parade that drew 2,000 people to Washington Square.

The public is invited to join the march.

Many came to hear Carrie Chapman Catt, the leading suffragette of the day, and later, founder of the national League of Women Voters, Herlihy said.

The Sunday, Oct. 20, parade, which will include vintage and classic vehicles, commemorates the coming centennial year for the 19th amendment to the U.S. Constitution (Aug. 19, 1920) and the birth of the national League of Women Voters.

Furthermore, it highlights Haverhill’s role in suffrage. The city had two women’s suffrage organizations, one founded in 1878 and the other in 1914.

“What’s interesting to find out is what an active role Haverhill people played in the women’s suffrage movement, men and women, for and against (called ‘Antis’),” said Green-Byrd, a founding member of the Haverhill League.

Green-Byrd and Herlihy recently took a preliminary stroll across the Basiliere Bridge to reflect on the march.

For suffrage to become law, men had to vote it in. For decades the objective had been an uphill fight as women argued that they as equally taxed citizens with a moral compass had the right to vote.

Antis argued that the women’s sphere was the home and child-rearing, and that political involvement would deter them from those responsibilities. Beyond this, they argued that women should rely on their husbands’ political judgment, Herlihy said.

In Haverhill, men who were vocal in their support for suffrage included a local Unitarian minister and a Jewish group, Herlihy said.

With a little prompting, Herlihy kicked off a shoe at the halfway point on the bridge. She placed it on a walking cane’s end and raised it, demonstrating how they marched.

“They were the Slipper City Suffragettes,” Herlihy said.

A year after the 1914 pro-suffrage march, Haverhill’s anti-suffrage group held a meeting at the local Elks Hall. The June 3, 1915, conference was attended by members of an state anti-suffrage organization.

And in 1915, three-fifths of the voters in Massachusetts voted against a referendum to give women the vote.

That changed June 15, 1919, when Massachusetts became the eighth state to ratify the 19th Amendment, en route to the 36 states needed for passage: “The right of citizens of the United States to vote shall not be denied or abridged by the United States or by any State on account of sex.”

A Bay State historian maintains that Massachusetts, at the very least, planted the seeds for women’s suffrage. Often, the suffrage movement is cited as beginning in July of 1848 at the Seneca Falls, New York, convention for women’s rights.

Barbara Berenson, author of “Massachusetts in the Woman Suffrage Movement: Revolutionary Reformers,” told a Haverhill audience last week that women’s suffrage in the United States rose out of the abolitionist movement in Massachusetts.

In 1850, the first national women’s rights convention was held in Worcester, she said.

Berenson spoke at the Buttonwoods Museum in Haverhill at the opening of its Women’s Suffrage Movement exhibit, on display this month in conjunction with the Haverhill League of Women Voters.

The exhibit includes a timeline of historic achievements of the Women’s Suffrage Movement, the names of local suffragettes and a suffragette banner discovered in an attic box at Buttonwoods.

Next Sunday’s parade will start on the Bradford side of the Basiliere Bridge and end nearby at the Haverhill Public Library, where an actress will perform as women’s rights activist and social reformer Susan B. Anthony.

No seats remain for the presentation, according to the library.

The suffrage movement and a century of women voting have led to important strides, Herlihy said.

Women are serving in large numbers in Congress and more women are throwing their hats in the ring at the state and local levels, especially since the Women’s March in 2017, a day after the inauguration of President Donald Trump, she said.

“Now a woman can actually run for president,” Herlihy said.

GO TO THE MARCH