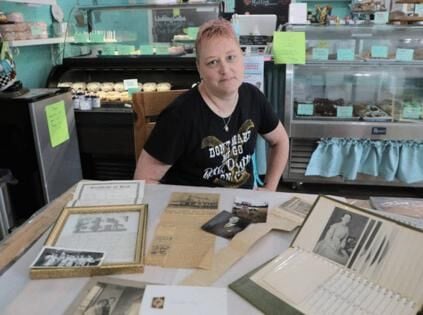 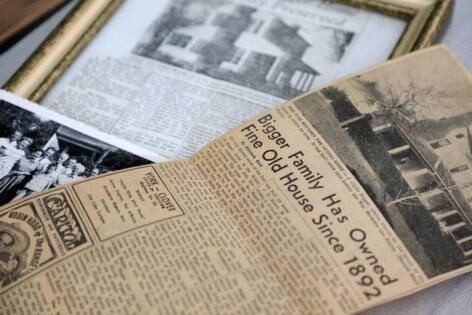 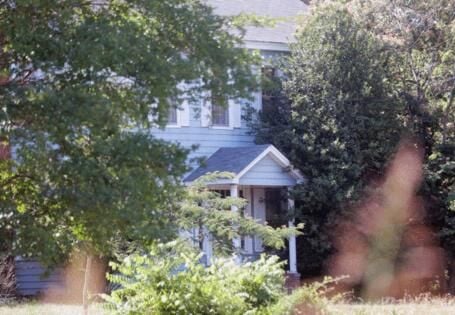 Just off of Highway 49 in Clover, South Carolina, nestled in the heart of the Lake Wylie community, sits the Bigger house.

Situated on more than four acres of land, the home — often endearingly referred to as “The Blue House” — has managed to survive for almost 180 years.

That is, until now.

Joy Bigger Sanderson is the great-granddaughter of James Bigger III, the home’s original builder. Sanderson said she recently placed a bid of $1.2 million on the house which is being sold as commercial real estate.

Sanderson withdrew her offer on account of her being unable to access funds from a trust left by her late father, Richard Andrew Bigger Jr., who passed away in May.

The house at 233 Catamount Dr. has been bought, lived in, and sold several times by numerous families over nearly two centuries.

According to Grace Fowler, a University of South Carolina Honors College graduate who researched the Bigger House, when James Bigger III died in the early 1850s, the house was passed onto Alexander Barnett Bigger, James’ nephew who then died in the early to mid-1860s during the Civil War.

From there, the house was inherited by Alexander’s daughter, Frances Bigger, who lived in the home for nine years with her husband, Captain William Beatty Smith, and their three young children before her untimely death in 1875.

The house soon fell out of the hands of the Bigger family when Capt. Smith married France’s sister and moved the family west where he would eventually go on to establish the Town of Clover.

Over the next several decades, the house would see a revolving door of owners until after World War I when the home was purchased by Robert and Carrie Allen.

According to a petition filed by lifelong Clover resident Brandon Stymiest, the house was sold to Robert Allen’s nephew, Robert Boyd, and his wife, Linda, in 1973. The couple then lived there for the next 35 years.

In total, the house was owned by the Boyds for 47 years. They kept the house in great condition, even as it was rented out for the last 12 years of their ownership.

Sanderson has never lived in the house. But that isn’t stopping her from trying to save the last standing, historical Bigger property from developers.

The Boyds sold it to Vivid Pink Realty, a South Carolina domestic limited liability company, in July 2020 for $500,000, according to documents obtained by The Charlotte Observer.

Now, the property is being sold as commercial real estate for $1.6 million, according to a listing from South Carolina-based real estate company, Rinehart Realty which is overseeing negotiations for Vivid Pink.

When the home was bought in 2020, it seemed as though all of Sanderson’s hopes of one day owning the property were lost as the Bigger house was officially sold away with an intent for the land to be developed.

But with an inheritance passed on to the family by Sanderson’s father, she saw one last chance to save the Bigger home from being demolished.

Sanderson placed a $1.2 million offer on the home in June, but without a way to access the funds until next year, she says she was forced to withdraw her bid.

“We tried to make an offer and we were going to put earnest money down to hold our spot,” Sanderson told the Observer. “But the way that probate works, I’m stuck with not being able to get a hold of any kind of money for more than a year.”

Falling in love with the Blue House

Kim Trainer, the matriarch of the last family to rent the property from the Boyds, lived in the house for 12 years before it was sold in 2020. Her family of seven moved to Clover knowing very little about the area before stumbling upon the home.

After hearing that a house on Catamount Drive was available to rent, her family stopped by the property and “fell in love” just by peeking through the windows, Trainer told the Observer.

They spent the next 12 years in the Bigger home, making lifelong memories for themselves and the community, Trainer said.

“Through the 12 years that we lived there, I can’t begin to tell you how many people would drop by and say ‘Hey, I was born in that room up there!’ and ‘Hey, I grew up here,’” Trainer said.

The house is said to have been a gathering place since its construction in the late 1840s. According to Trainer, her family did their best to honor the Biggers by keeping that sense of community alive while they lived there.

“Years and years ago, the whole community would come to that house and have square dances there. Now, if you lifted up the carpet you can see the indentations of the wear and tear on the wood floors from it being the community’s gathering place,” Trainer said. “While we were there, it still continued to have that community feel.”

Recruiting help from the county

Trainer has experience working with York County officials to preserve green space and establish more parks in the community. Saving the property from developers is something that Trainer considers to be an integral part of that cause.

And she’s not alone.

However, despite her best efforts, she, too, failed to save the property from developers.

“We led (the initiative) with this because so many people were interested in this home and it is so deeply rooted in the history of the area,” Love told the Observer. “As the county council representative for the area and knowing the importance of saving this home, I’ve done everything in my power to try and save it.”

Over the past two years, multiple petitions from the community have been created to save the home, with the most active one garnering more than 1,400 signatures.

‘It will be up to the developer’

J.D. “Jay” Rinehart, real estate broker and owner of Rinehart Realty, claimed that the new owner of the home has also made attempts to preserve the property.

“The current owner has offered to donate the structures to York County and has communicated the same to Allison Love, the county councilperson for the district, to a non-profit and even to a private family to move from the property,” Rinehart explained in a statement to the Observer. “If no one wants the structures, it will be up to the developer of this commercial property to address the future of them.”

Sale documents obtained by the Observer and an LLC filing with the South Carolina Secretary of State reveal that Vivid Pink Realty is owned by Saajan Ashok Patel, or “Ashok Patel,” of Purchase, New York.

Trainer said she tried to buy the property from the Boyd family and was even given the opportunity to move the entire house off the land in an attempt to preserve it. Trainer explained that due to financial reasons, both solutions were unfeasible.

“To move the house, you would have to break it apart in chunks and every intersection that had electrical wires was going to be $10,000 per intersection to bring down the wiring,” Trainer said.

And although the house’s original features were kept in pristine condition, the home still needed to undergo major renovations (such as installing HVAC) to make it more livable for a modern family.

She estimated the total renovations costs to be around an additional $100,000.

“At that point, we were better off looking for another house,” Trainer said.

More than a decade on the market

Trainer claims the Boyds disclosed to the family before they signed a lease in 2008 that even though they were renting the home, it was still for sale at $1.5 million.

Despite that, the home sold for a third of the price at $500,000 some 12 years later. Rinehart confirmed that the property had been for sale during the period before the purchase by Patel and Vivid Pink Realty.

“Prior to the current owner purchasing the property, it was on the market for almost 12 years,” Rinehart told the Observer. “It was marketed widely and openly and had a large road sign promoting it was for sale.”

During that time, the Bigger family did not place an offer on the property in an attempt to purchase the house back from the Boyds.

According to Rinehart, the current $1.6 million price tag on the property is set based on similar sales in the area, the property’s value and “the owner’s direction.”

Rinehart also confirmed to the Observer that the property is zoned for general commercial use with the intent that it will be developed. He, however, declined to comment on offers and negotiations on the property.

Although Sanderson said it likely would be a long shot to retain the property, she hasn’t stopped thinking about what could have been.

“I was just hoping we could get it and keep it in the family for the community,” Sanderson said. “We had big hopes and dreams.”

Sanderson says she would have honored the home’s legacy as a community gathering place by opening up a farmers market, or perhaps a vineyard.

“There are so many endless possibilities,” Sanderson said. “Even if I owned it, it would still be a community property.”

‘That’s my heritage, that’s my past’

Today, the home is occupied by new renters as Rinehart Realty and Patel continue their efforts to find a buyer.

If the property is sold to commercial developers, the Bigger house will likely cease to exist. It’s a realistic scenario that still upsets Sanderson two years later.

“It’s frustrating,” she said. “That’s my heritage, that’s my past.”

‘Until my dying day’

Sanderson still lives in the area with her husband, Galen. Together, the couple has four children. They currently operate Fast Frog Bakery in Lake Wylie, a business located on one of the last remaining plots of land that belong to the Bigger family.

Although her family has relocated to Anderson, Trainer continues to stand alongside Sanderson and many others in the Clover community in their fight to win back the Bigger home.