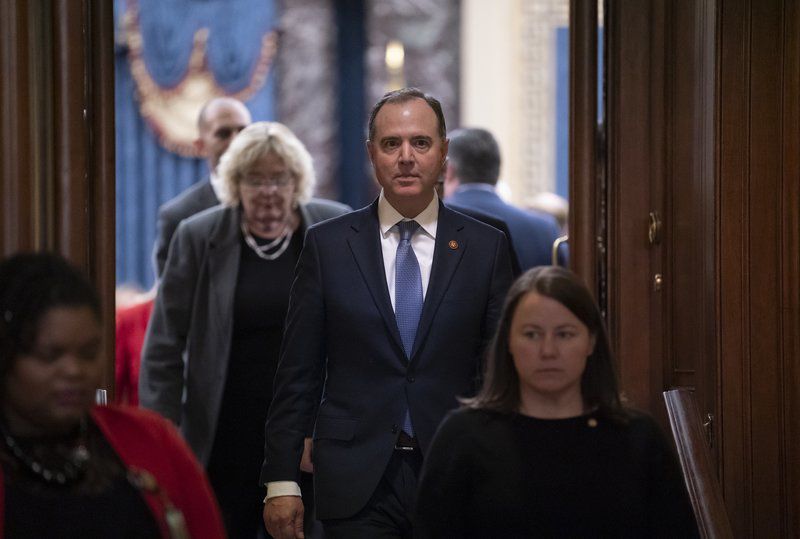 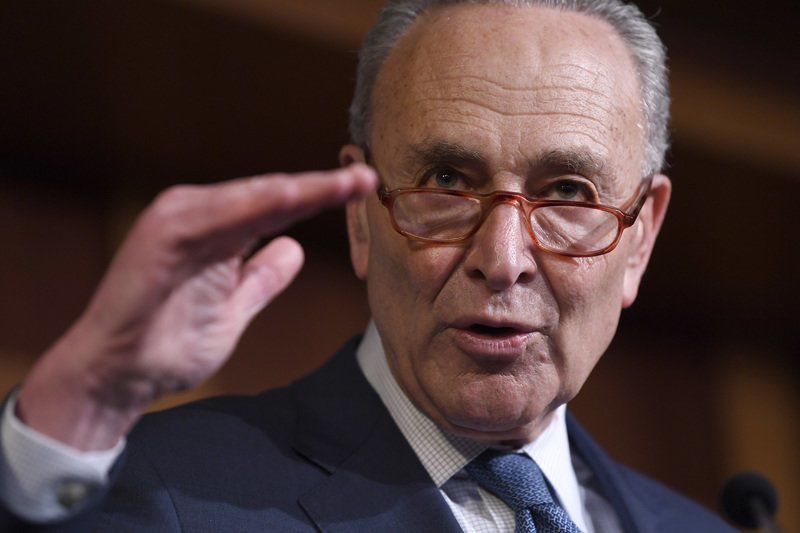 Senate Minority Leader Sen. Chuck Schumer of N.Y., speaks during a news conference on Capitol Hill in Washington, Wednesday, Feb. 5, 2020, following a vote in the Senate to acquit President Donald Trump on both articles of impeachment. (AP Photo/Susan Walsh)

Senate Minority Leader Sen. Chuck Schumer of N.Y., speaks during a news conference on Capitol Hill in Washington, Wednesday, Feb. 5, 2020, following a vote in the Senate to acquit President Donald Trump on both articles of impeachment. (AP Photo/Susan Walsh)

WASHINGTON — The impeachment of President Donald Trump is over, but it's far from case closed on Ukraine.

A full accounting of Trump's dealings with Ukraine, stemming in large part from the foreign policy entanglements pursued by personal lawyer Rudy Giuliani, remains unfinished despite Trump's acquittal Wednesday in the Senate.

As the president launches into his reelection campaign, pushing past the charges that threatened his legacy, it’s only a matter of time before fresh details, documents and eyewitnesses emerge, including revelations in a new book from John Bolton, the former national security adviser.

The result could be the start of a prolonged investigation with no clear endpoint, keeping questions about the president's conduct alive through the election in November. It's the kind of prolonged fallout that Trump and his GOP allies sought to avoid as they rejected a lengthy impeachment trial.

Schiff, the House’s lead impeachment manager, said that no final decisions have been made on whether to subpoena Bolton in the House after the Senate voted not to hear his testimony.

“The president’s basic lack of character, his willingness to cheat in the election — he's not going to stop,” Schiff said. “It’s not going to change, which means that we are going to have to remain eternally vigilant.”

Bolton, who was in the room as Trump made key decisions, will be telling his story soon, possibly in testimony, if House leaders decide to subpoena him, or in a book that is scheduled for release in March.

And it's not just Bolton.

Giuliani associate Lev Parnas, a Florida businessman who claims to have been working for Trump on Ukraine, has said he is eager to testify before Congress and tell his side of the story. Indicted on campaign finance charges last year, he has been providing documents and messages to impeachment investigators.

Meanwhile, thousands of pages of Ukraine-related documents are slowly emerging in response to Freedom of Information Act lawsuits filed by watchdog groups. The Justice Department disclosed in a court filing last weekend that it has 24 emails related to Ukraine that it has not produced.

Rep. Eliot Engel, the House Foreign Affairs chairman, said the Ukraine story “is definitely not over.” His committee was one of several that worked on the impeachment inquiry.

“I can tell you we're not going to let the issue drop,” Engel said. “I think there are a lot of unanswered questions that the American public deserves to know.”

Connecticut Rep. Jim Himes, a member of the intelligence panel, said the House will need to be “more vigorous than ever for abuses of power” as Trump is likely to be emboldened by his acquittal. “Even if the president continues his obstruction, the facts will come out,” he said.

Senate Majority Leader Mitch McConnell acknowledged in the minutes after the vote that “the investigations will go on,” adding “that’s sort of what Congress does.” But Republicans said it's time for Congress to move on.

South Carolina Sen. Lindsey Graham, the chairman of the Senate Judiciary Committee and one of Trump’s fiercest GOP defenders, said the “the cloud over the presidency has been removed.” But at the same time, he announced that his own committee would continue to investigate Hunter Biden, the son of former Vice President Joe Biden who was the target of Trump’s Ukraine push.

The will-he-or-won’t-he saga of Bolton’s testimony has been running since October, when he was invited to testify voluntarily in the House’s impeachment inquiry and declined to show up. Democrats opted against a subpoena as Bolton’s attorney threatened time-consuming litigation.

In January, after the House voted to impeach Trump, Bolton made a surprise announcement that he would testify in the Senate trial if called. Since then, House Democrats have pushed off questions about whether they would try again.

Schiff said that Democrats would “canvas as a caucus and our leadership to discuss next steps” on Bolton. House Judiciary Committee Chairman Jerrold Nadler, D-N.Y., was less cautious, saying it was “likely” Bolton would be subpoenaed by the House.

If House Democrats do subpoena Bolton, it’s unclear how he will respond. His lawyer, Chuck Cooper, did not immediately return an email message seeking comment Wednesday.

Beyond Ukraine, Democrats are expected to revive investigations that they were conducting before Congress in September was first alerted to Trump’s overtures to Ukrainian President Volodymyr Zelenskiy.

They will likely continue their push to obtain Trump’s taxes, look into his financial dealings and examine his most controversial policies, including child separation at the border. They are also expected to continue to push for legislation passed by the House that would attempt to combat foreign interference in elections, using Trump’s efforts in Ukraine as a touchstone.

“We’re going to spend a lot of time focusing on election security,” said Senate Democratic leader Chuck Schumer in an interview with the AP on Wednesday. "It’s clear that Trump would intervene in elections, and it's clear to many of us that he would not be chastened.”

Democrats could also look for other ways to constrain the president. The House could try and curtail dollars for certain programs, and though the process is long, continue to fight for witnesses in court. Democrats sued former White House counsel Don McGahn last year after he refused to testify before the Judiciary panel on special counsel Robert Mueller’s report, and that case is ongoing.

“In effect, he’s said he's above the law. What guardrails are there?” asked Sen. Richard Blumenthal, D-Conn. “One is the power of the purse. Another is to continue to go to court.”

Yet Democrats concede that defeating Trump in November is their shot at achieving what impeachment could not.

“This is a president who is now completely unleashed, and it’s going to be very difficult to hold him accountable,” said Maryland Sen. Chris Van Hollen. "Between now and then you are going to see a steady drip, drip of documents that will shed a light on the president’s abuse of power.”