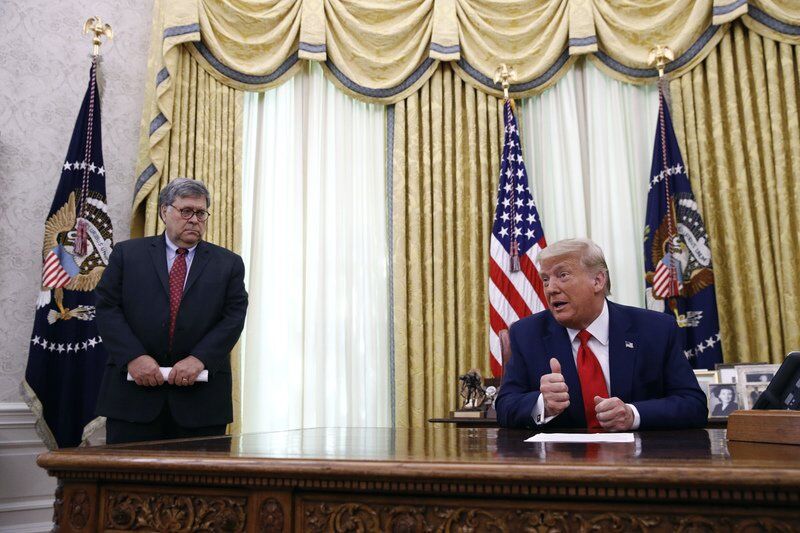 President Donald Trump speaks alongside Attorney General William Barr during a law enforcement briefing on the MS-13 gang in the Oval Office of the White House, Wednesday, July 15, 2020, in Washington. (AP Photo/Patrick Semansky) 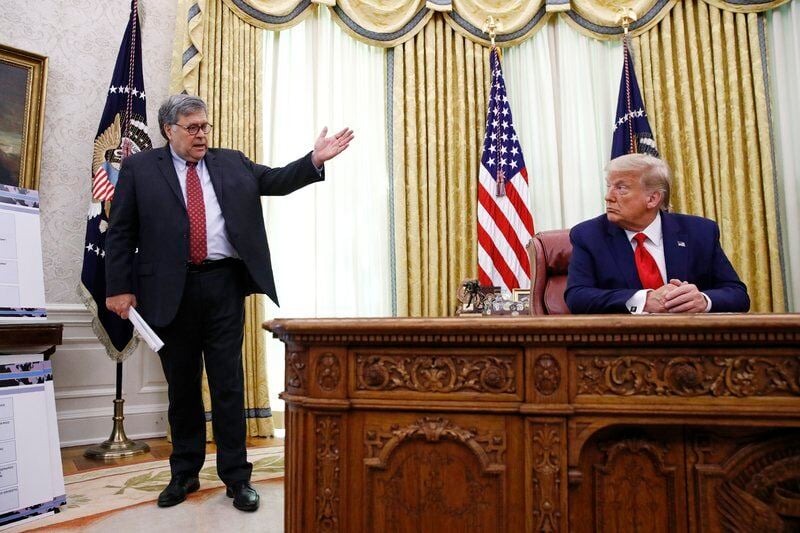 Attorney General William Barr, left, speaks with President Donald Trump during a a law enforcement briefing on the MS-13 gang in the Oval Office of the White House, Wednesday, July 15, 2020, in Washington. (AP Photo/Patrick Semansky)

President Donald Trump speaks alongside Attorney General William Barr during a law enforcement briefing on the MS-13 gang in the Oval Office of the White House, Wednesday, July 15, 2020, in Washington. (AP Photo/Patrick Semansky)

Attorney General William Barr, left, speaks with President Donald Trump during a a law enforcement briefing on the MS-13 gang in the Oval Office of the White House, Wednesday, July 15, 2020, in Washington. (AP Photo/Patrick Semansky)

Hundreds of federal agents already have been sent to Kansas City, Missouri, to help quell a record rise in violence after the shooting death of a young boy there. Sending federal agents to help localities is not uncommon. Barr announced a similar surge effort in December for seven cities that had seen spiking violence.

Usually, the Justice Department sends agents under its own umbrella, like agents from the Bureau of Alcohol, Tobacco, Firearms and Explosives or the Drug Enforcement Agency. But this surge effort will include Department of Homeland Security Investigations officers, who generally conducts drug trafficking and child exploitation investigations.

Trump and Barr are expected to be joined at the White House announcement Wednesday by Chicago-based U.S. Attorney John Lausch, according to his office, along with the U.S. attorney and the sheriff of New Mexico’s most populous county that includes Albuquerque.

DHS officers have already been dispatched to Portland, Oregon, and other localities to protect federal property and monuments as Trump has lambasted efforts by protesters to knock down Confederate statutes. Trump has linked the growing violence in the streets with protests over racial injustice, though criminal justice experts say the spike defies easy explanation, pointing to the unprecedented moment the country is living through — with a pandemic that has killed more than 140,000 Americans, historic unemployment, stay-at-home orders, a mass reckoning over race and police brutality, intense stress and even the weather.

Local authorities have also complained the surges in federal agents have only exacerbated tensions on the streets.

The decision to dispatch federal agents to American cities is playing out at a hyper-politicized moment when Trump is trying to show he is a “law-and-order” president and painting Democratic-led cities as out of control. With less than four months to go before Election Day, Trump has been serving up dire warnings that the violence would worsen if his Democratic rival Joe Biden is elected in November, as he tries to win over voters who could be swayed by that message.

But civil unrest in Portland only escalated after federal agents there were accused of whisking people away in unmarked cars without probable case.

The spike in crime has hit hard in some cities with resources already stretched thin from the pandemic. But the move to send in federal forces was initially rejected by leaders in Chicago and New York, another city with a surge in violence.

Chicago Mayor Lori Lightfoot later said she and other local officials had spoken with federal authorities and come to an understanding.

“I’ve been very clear that we welcome actual partnership,” the Democratic mayor said Tuesday after speaking with federal officials. “But we do not welcome dictatorship. We do not welcome authoritarianism, and we do not welcome unconstitutional arrest and detainment of our residents. That is something I will not tolerate.”

In New Mexico, meanwhile, Democratic elected officials were cautioning Trump against any possible plans to send federal agents to the state, with U.S. Sen. Martin Heinrich calling on Bernalillo County Sheriff Manny Gonzales, who will be at the White House on Wednesday, to resign.

“Instead of collaborating with the Albuquerque Police Department, the Sheriff is inviting the President’s stormtroopers into Albuquerque,” the Democratic senator said in a statement.

In Kansas City, the top federal prosecutor said any agents involved in an operation to reduce violent crime in the area will be clearly identifiable when making arrests, unlike what has been seen in Portland.

“These agents won’t be patrolling the streets,” U.S. Attorney Timothy Garrison said. “They won’t replace or usurp the authority of local officers.”

Operation Legend — named after 4-year-old LeGend Taliferro, who was fatally shot while sleeping in a Kansas City apartment late last month — was announced on July 8.

Garrison has said that the additional 225 federal agents from the FBI, DEA, ATF and the U.S. Marshals Service join 400 agents already working and living in the Kansas City area.

The Trump administration is facing growing pushback in Portland. Multiple lawsuits have been filed questioning the federal government's authority to use broad policing powers in cities. One suit filed Tuesday says federal agents are violating protesters’ 10th Amendment rights by engaging in police activities designated to local and state governments.

Oregon’s attorney general sued last week, asking a judge to block federal agents’ actions. The state argued that masked agents had arrested people on the streets without probable cause and far from the U.S. courthouse that’s become a target of vandalism.

Federal authorities, however, said state and local officials had been unwilling to work with them to stop the vandalism and violence against federal officers and the U.S. courthouse.

The use of federal agents against the will of local officials also has set up the potential for a constitutional crisis, legal experts say.

“I still believe in the rule of law in this country, and we would go to court immediately. I believe what the president is doing is unconstitutional,” the Democratic mayor said on MSNBC's “Morning Joe” show on Wednesday.