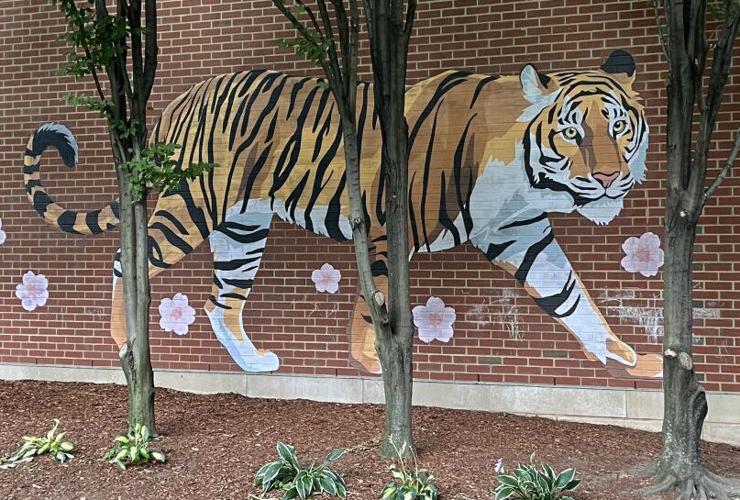 Beverly native Amanda Beard Garcia recently created “Sanctuary 2022,” an interactive, 20-foot-long artwork — which includes this mural of a tiger — at Tufts Community Common in Boston. The project was part of a public art collaboration between Pao Arts Center and the Asian Community Development Corporation. 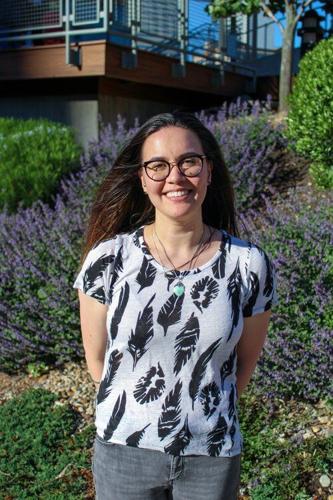 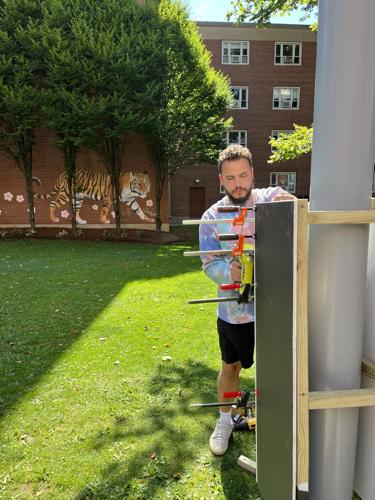 Amanda Beard Garcia’s husband Jacob nails together a chalkboard easel attached to a utility pole. Neighborhood residents are encouraged to add their own to the easels. 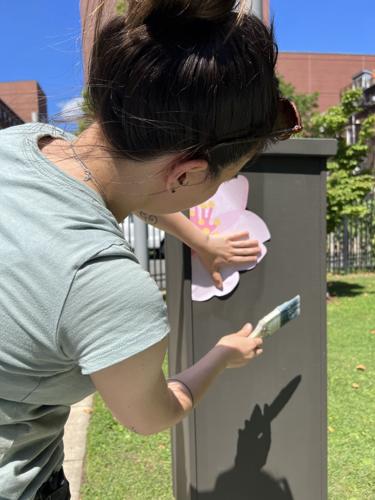 Garcia adds a cherry blossom to a chalkboard easel where members of the public are welcome to add their own artistic expressions.

Beverly native Amanda Beard Garcia recently created “Sanctuary 2022,” an interactive, 20-foot-long artwork — which includes this mural of a tiger — at Tufts Community Common in Boston. The project was part of a public art collaboration between Pao Arts Center and the Asian Community Development Corporation.

Amanda Beard Garcia’s husband Jacob nails together a chalkboard easel attached to a utility pole. Neighborhood residents are encouraged to add their own to the easels.

Garcia adds a cherry blossom to a chalkboard easel where members of the public are welcome to add their own artistic expressions.

Murals by definition are public works of art.

They are painted on the walls of buildings and other shared spaces, and address important topics in the communities where they are located.

But for Beverly native Amanda Beard Garcia, a graphic artist who has created a number of murals on the North Shore and beyond, these works increasingly overlap with personal concerns.

That is certainly the case with her latest mural, “Sanctuary, 2022,” which was recently completed at the Tufts Community Common at 174 Harrison Ave. in Boston’s Chinatown neighborhood, where it will be on display until Sept. 29.

Featuring a tiger and some cherry blossoms, and accompanied by easels where neighborhood residents can create their own art, the work rose out of conversations that Garcia had with two residents of Chinatown.

Those facts didn’t begin to figure strongly in her art until 2020, just after Garcia had founded the independent firm Likemind Design with her husband, Jacob. That was followed by the advent of the pandemic, the murder of George Floyd and a spike in anti-Asian crime, all of which Garcia describes as a “shattering interlude.”

“I was born and raised in a predominantly white population on the North Shore,” Garcia said. “And so came, ‘Where do I belong in these conversations about race? Am I allowed to feel this much anger and devastation?’”

Those questions were intensified by the shootings in March 2021 of Asian women who were working at spas in Atlanta, which “opened the online community floodgates for Asian American collective care and activism,” Garcia said. “I dove in head first. Reflecting on and uncovering some of my family’s experience in conjunction with newfound Asian American history has helped me process my grief.”

Garcia’s murals have usually featured affirmations and slogans expressed with bold, colorful lettering. She painted portraits of women “and particularly women of color,” along with encouraging phrases such as “Your Voice Matters” on electrical boxes in Medford in 2020.

A mural that she created on a door in 2021 for a public art project called “Newton Out Doors” drew directly from Garcia’s family history, and featured a portrait of her maternal grandmother, Hang Chin. Cantonese characters spelling out “Por Por,” an endearment, were inscribed on the back of the door.

“Painting her felt like a way of coping with everything,” Garcia said.

But the violence at work in the culture at large visited Garcia in Newton when that door was vandalized, and had to be moved to a spot in front of City Hall for protection.

But rather than allow the incident to discourage her, Garcia was excited when the opportunity arose to explore Asian themes further in “Sanctuary, 2022,” which was commissioned by the Pao Arts Center in Chinatown.

Garcia was one of three artists chosen for a residence at the Center in a 26-week program that started in April and is also supported by the Asian Community Development Corporation.

Pao Arts Center was founded in 2017, and has been hosting similar Residence Labs since 2019, with the purpose of empowering “artists and residents to collectively preserve Boston’s Chinatown through creative and artistic activation of underutilized sites in the neighborhood.”

Each Residence Lab has a theme, and this year’s is “Radical Inclusion,” which “recognizes our desire to belong without sacrificing our identity and power.”

Garcia met with her partners in this project, Yanna Chen and Xingyao He, in eight, two-hour long sessions that were facilitated by an interpreter from the Asian Community Development Corporation. The three women referred to themselves as “Powerful Painting Ladies.”

“Sharing a space with other women of color and working together for the greater community has been an overwhelmingly joyful experience,” Garcia said.

Their meetings included meals, presentations, discussions and creative exercises, which were designed to help them envision a project that addressed the project’s theme.

‘Sanctuary,’ as Garcia describes it, is an interactive drawing installation featuring a 20-foot-long wheat paste tiger, cherry blossoms, along with chalkboard easels.

“’Sanctuary’ is prompted by our own memories of belonging: Fresh air, relaxation, safety, freedom and creativity,” Garcia said.

The easels were inspired by children’s chalk drawings that appear on walls and sidewalks all over the Harrison Avenue location, because they wanted to encourage that creative impulse in visitors of all ages.

“The larger than life tiger is a symbol of 2022 and our collective community’s resilience, strength and protection,” Garcia said. “The cherry blossoms represent grace and renewal during challenging moments.”

Garcia said it is impossible to describe the impact that participating in Residence Lab has had on her, but she can readily express how the Powerful Painting Ladies expect that people will benefit from visiting ‘Sanctuary.’

“We hope that our project will cultivate feelings of comfort, creativity, and joy to anyone who enters the park,” Garcia said.