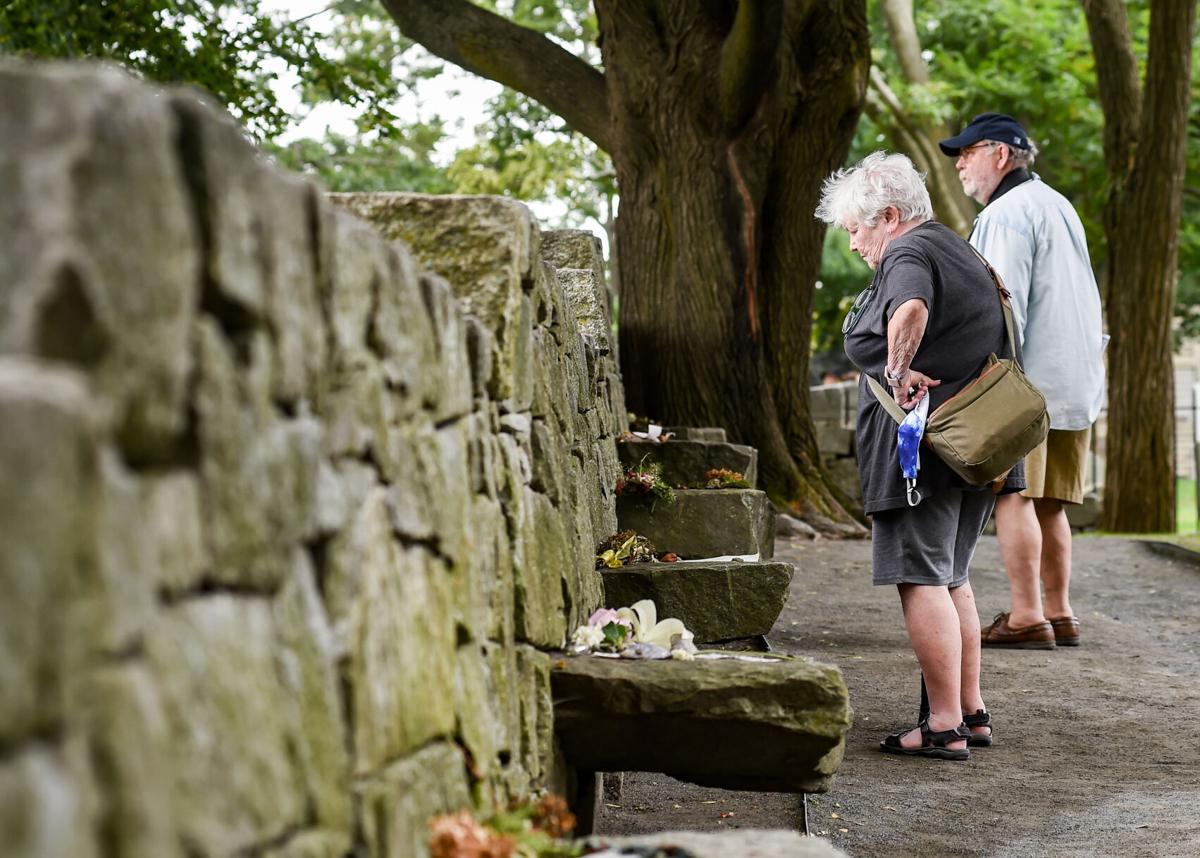 A woman looks at a Salem Witch Trials memorial site just before the Voices Against Injustice sponsored a discussion Wednesday marking the end the witch trials on Sept. 22, 1692. 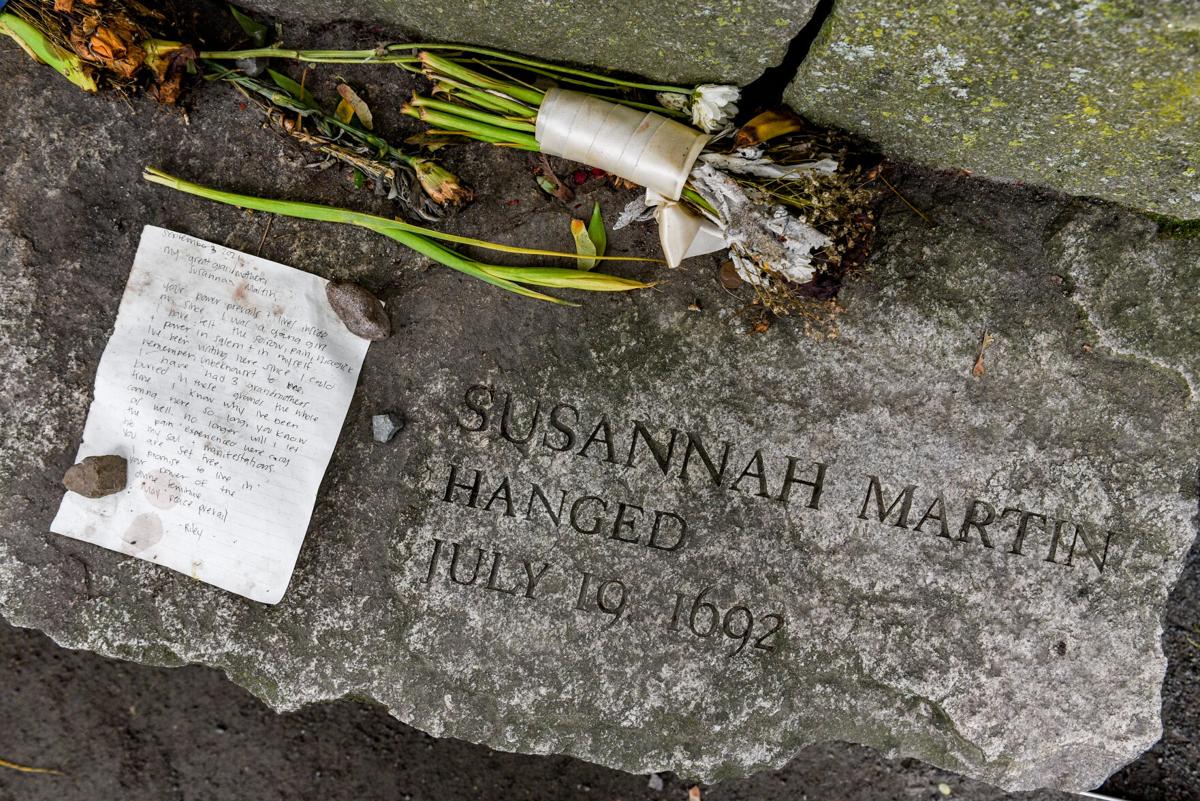 Susannah Martin is one of the many victims being commemorated by the Voices Against Injustice in Salem. 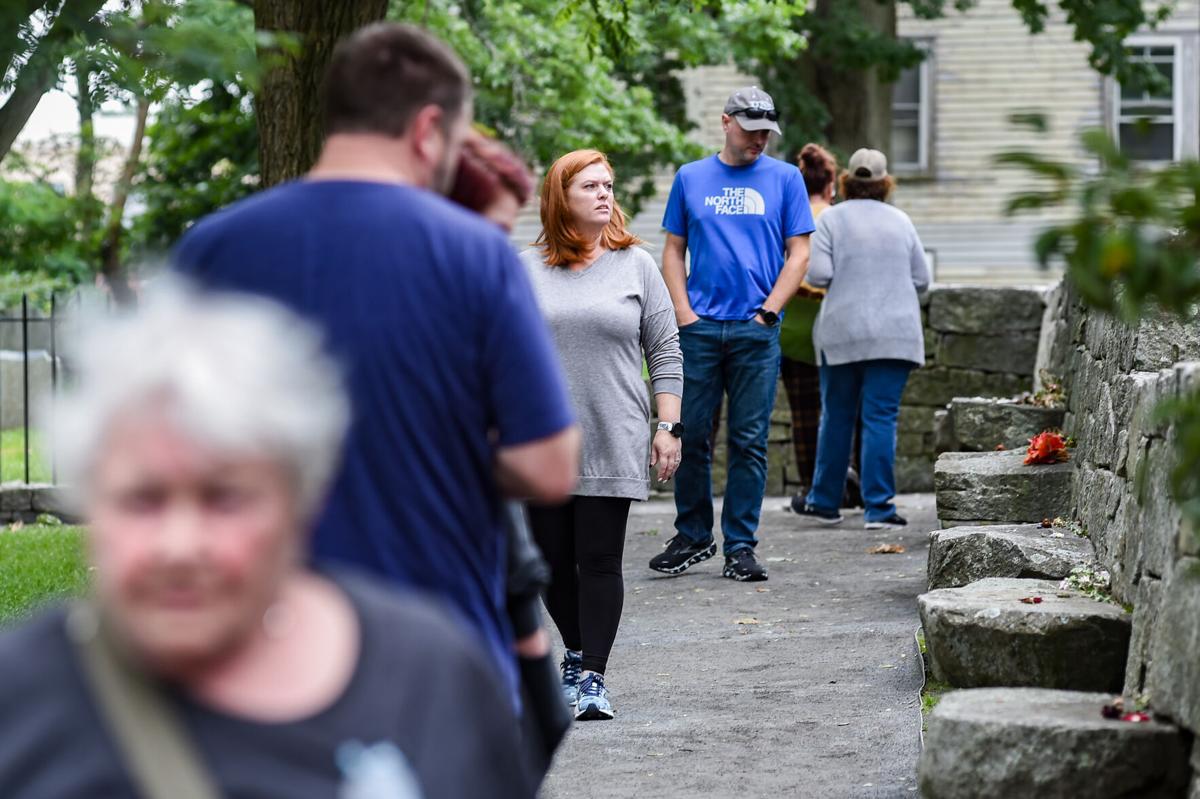 Tourists walk along memorial benches as the Voices Against Injustice commemorates the ending of the Salem Witch Trials on Sept. 22, 1692. 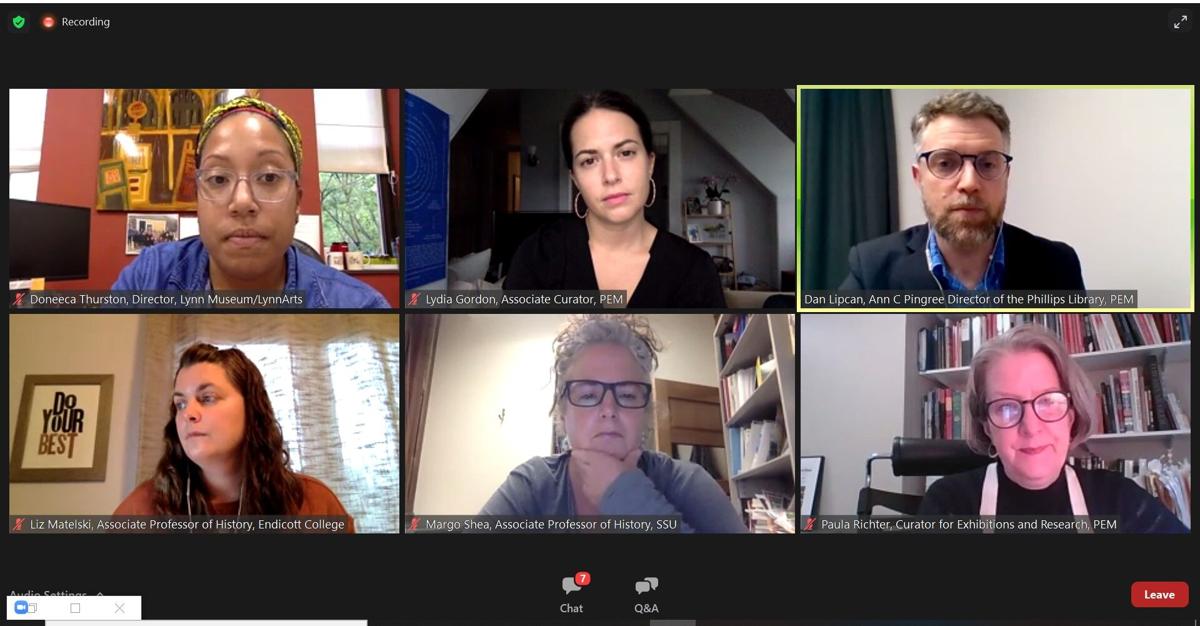 Panelists take part in a virtual forum on the 329th anniversary of the last wrongful executions of the Salem Witch Trials in 1692.

A woman looks at a Salem Witch Trials memorial site just before the Voices Against Injustice sponsored a discussion Wednesday marking the end the witch trials on Sept. 22, 1692.

Susannah Martin is one of the many victims being commemorated by the Voices Against Injustice in Salem.

Tourists walk along memorial benches as the Voices Against Injustice commemorates the ending of the Salem Witch Trials on Sept. 22, 1692.

Panelists take part in a virtual forum on the 329th anniversary of the last wrongful executions of the Salem Witch Trials in 1692.

[Editor's note: This story has been updated to clarify that the formula "fear plus a trigger equals a scapegoat" is credited to the Salem Witch Museum.]

SALEM — On the 329th anniversary of the final eight wrongful executions of accused witches in 1692, panelists from the group Voices Against Injustice, the Peabody Essex Museum, Salem State University and Endicott College came together virtually to talk about the lessons the Witch Trials hold for today.

The hour-long discussion, “Salem Remembers: Connecting the Past and Present,” touched on both the historic injustice and how the same scapegoating and persecution continue to play out again and again. But it also addressed the tension between the solemnity of sites like the Witch Trials Memorial and the carnival-like atmosphere of Halloween in Salem.

Liz Matelski, an associate professor of history at Endicott College in Beverly, teaches a course on the Witch Trials each fall. It is usually fully subscribed. But she uses the class, she said, to show students the recurring nature of the “witch hunt.”

“Fear plus a trigger equals a scapegoat,” Matelski said, crediting the Salem Witch Museum with the formula. There was the cultural fundamentalist movement of the 1920s, with the return of the Ku Klux Klan; the mass internment of Japanese-Americans during World War II, anti-Communism both in the 1920s and again in the 1950s, and more recently, scapegoating of the LGBTQ community over HIV and AIDS in the 1980s and 1990s.

“It’s easy to dismiss (the Witch Trials),” said Matelski. “It was so long ago. When we look at our not-so-distant past, we have an opportunity and an obligation to look at the scapegoating and persecution of entire communities of people.”

The panel was hosted by VAI Board Member and Director of the Lynn Museum Doneeca Thurston. Margo Shea, an associate professor at Salem State University, spoke of the lessons that can be taken from the dissonance between those raucous Halloween crowds and the quiet contemplation intended at the memorial. “It can seem like the memory of 1692 gets lost somewhere between the votive candles and the crushed empties,” said Shea, who said that while it’s tempting to criticize, the memorial is also part of the contemporary landscape.

One segment of the program focused on the newly-opened Peabody Essex Museum exhibit, “Salem Witch Trials” A Reckoning and Reclaiming,” presented by Associate Curator Lydia Gordon, Paula Richter, who is curator for exhibitions and research, and Dan Lipcan, who is the director of the Phillips Library.

The exhibit, which runs through March 20, includes a mixture of archival documents, objects that were owned by both the accused and accusers, and items that connect the trials to the present day.

Among that latter category is an evening dress that was part of the fall, 2007 collection by the late fashion designer Alexander McQueen.

McQueen had recently learned that one of his ancestors, Elizabeth How, was accused. The dress is juxtaposed against documents concerning her case, including the complaint and warrant, as well as letters of support from two Rowley ministers, who had the courage to speak in support of How.

It would be nearly two decades until the governor of the Massachusetts Bay colony issued an order exonerating How and the others accused — but also, Lipcan noted, a clause that absolved the jailers, executioners and other officials of liability. Lipcan pointed out the parallels between that and today’s debate over qualified immunity for police and other public officials.

Gordon, the associate curator, spoke about another modern artist, photographer Frances Denny, who learned that her 10th great-grandfather was witch trial judge Samuel Sewall, a man who later came to regret his role. Denny found and photographed a number of individuals who are self-identified witches.

A label that was once thrown at people out of fear and to control them, Gordon suggested, is now proudly claimed as an identity, something she called “representational justice.”