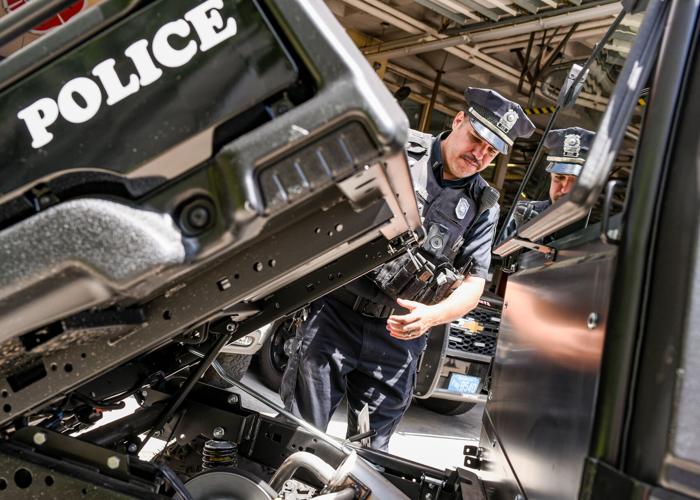 Officer Roberson Troncoso opens up the bed of a John Deere “Gator” to reveal the engine. The Salem fire and police departments received three rescue vehicles donated by Salem Hospital. 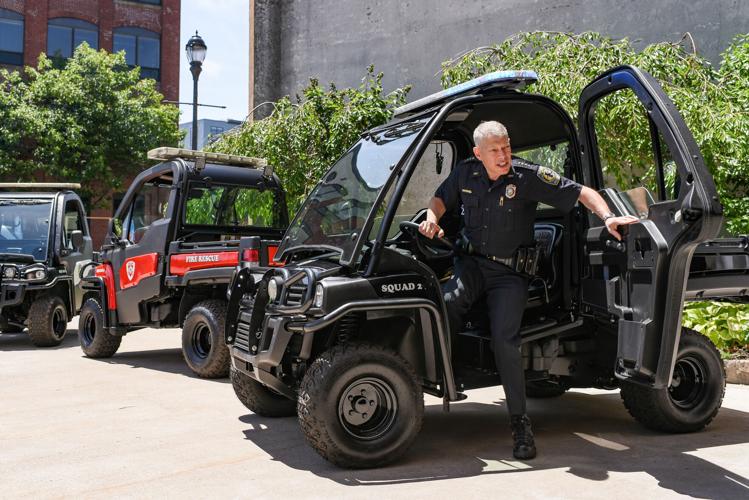 Salem police Chief Lucas Miller exits one of the two Police Department "gator" vehicles after taking it for a test drive. The Salem Fire Department also received one of the three rescue vehicles donated by Salem Hospital. 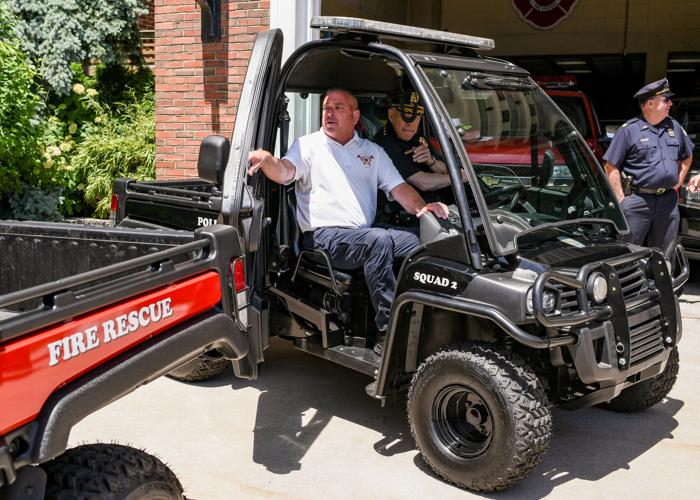 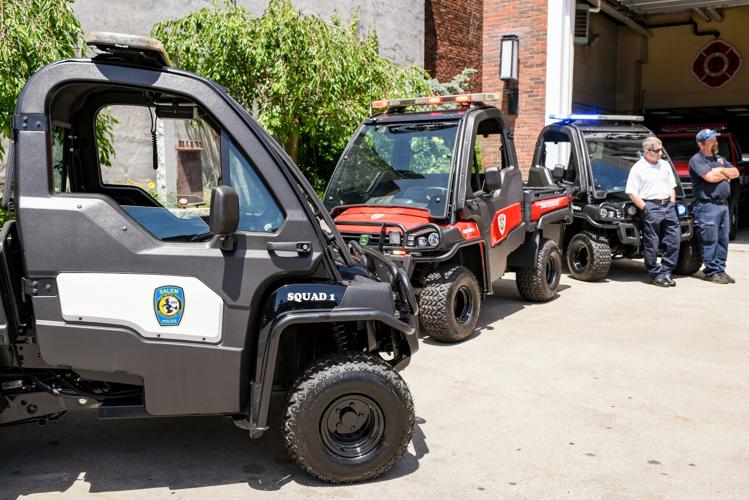 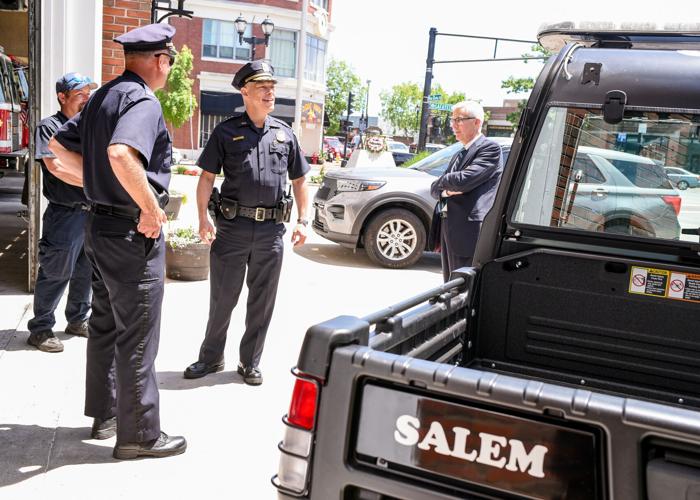 Salem police Chief Lucas Miller checks out one of two John Deere "gator" vehicles to the department donated by Salem Hospital. The Salem Fire Department also received one which will be outfitted as a miniature fire pump. 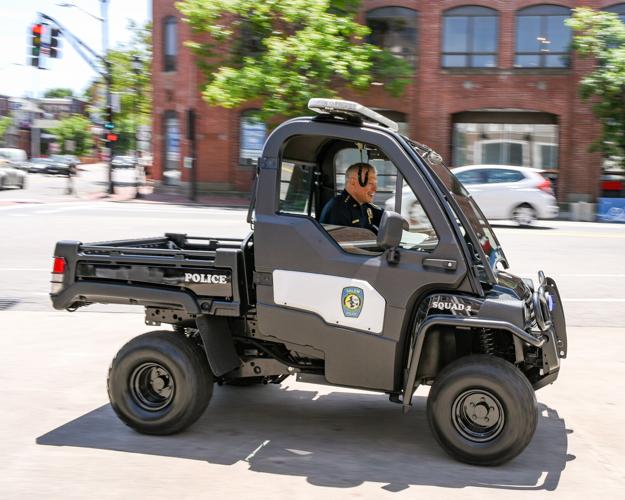 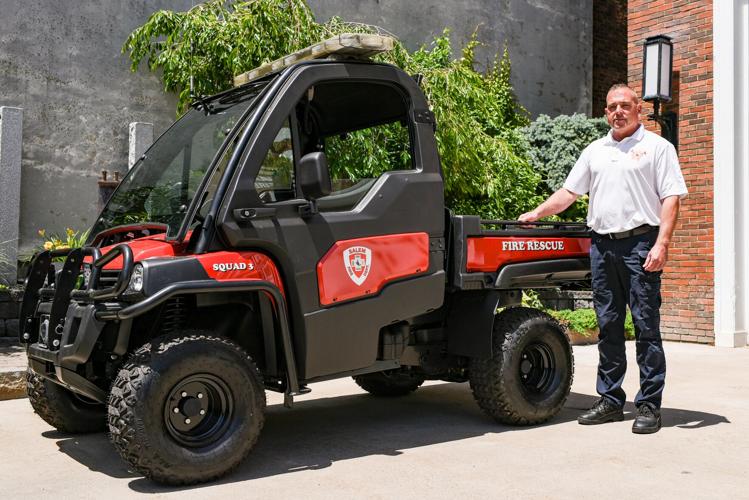 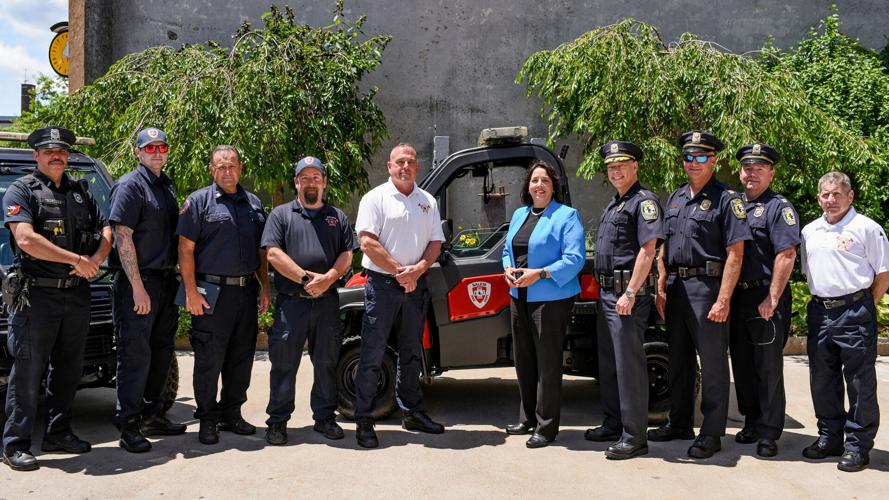 Officer Roberson Troncoso opens up the bed of a John Deere “Gator” to reveal the engine. The Salem fire and police departments received three rescue vehicles donated by Salem Hospital.

Salem police Chief Lucas Miller exits one of the two Police Department "gator" vehicles after taking it for a test drive. The Salem Fire Department also received one of the three rescue vehicles donated by Salem Hospital.

Salem police Chief Lucas Miller checks out one of two John Deere "gator" vehicles to the department donated by Salem Hospital. The Salem Fire Department also received one which will be outfitted as a miniature fire pump.

There’s zero intelligence suggesting threats are being planned against the City of Peace this year, according to Salem police Chief Lucas Miller. But it does come after a round of unsubstantiated threats targeted Collins Middle School last week and an already surging tourist season ramps up into the summer months alongside near-nightly examples of gun violence and mass shootings across the United States.

“Salem’s iconic status makes us more of a target than other similar municipalities. Obviously, the population and cultural centers of the world — New York, Boston, Washington D.C. — are probably bigger targets both because of the number of people and just because they’re each their own centers of the universe,” said Miller, who previously managed the New York Police Department’s Joint Terrorism Task Force with the FBI. “If you put yourself in the mind of somebody who’s looking to do something that’s a big splash in the world, and you rejected Boston ... what’s your second choice?

“The painting of the Samantha statue ... that made it all the way to the New York media,” Miller continued, referencing a recent vandalism incident targeting a city tourism landmark. “I could well imagine Salem would be your second choice, if you look to see how much attention in the media things in Salem get.”

For that reason, Miller said, officials across all levels are keeping tabs on threats around the world, imagining what problems could look like if they ever arrive. That way, if they at some point do, law enforcement will be prepared.

“It’s a coaching principle. If you simply prepare yourself for your last game, you won’t be ready for your next game,” Miller said. “Looking at previous incidents can inform us, but we can’t assume the last threat will be the same as the next.”

This past week, school leaders met with parents — though not many — at a safety summit to begin the week. About 30 people were in attendance between parents, staff and elected officials, as Miller and schools Superintendent Steve Zrike discussed measures to protect schools from gun violence.

Some questions posed at the summit seemed to have Uvalde, Texas, in mind, where a mass shooting at an elementary school ultimately revealed cascading failures on the part of law enforcement to protect children. One parent asked, for example, if Salem Public Schools’ doors lock properly. Another asked whether police have keys to locked doors, and if not, if they can breach a locked door.

All three questions were responses to security failures in Uvalde, after a door didn’t lock properly and police both lacked keys and equipment to get through a barricaded door to access the shooter as the tragedy continued to unfold.

“We don’t have keys to every school facility, but we do have breaching equipment in the supervisor’s car, my car, and another car,” Miller said. “I can assure you there isn’t a door in any of these schools we can’t get through.”

That said, there is room for improvement in Salem’s schools, according to Zrike.

“Sadly, every time there’s an incident nationally, there are funding streams that come out in terms of school safety,” he said. “One of the things I want to look at is vestibules. We don’t have any vestibules in any of our schools, meaning once you come into our school, you have immediate access to our school.”

Public safety leaders also picked up some critical hardware this week with three new John Deere “Gator” utility vehicles. Two are going to Salem police, while a third is being dealt to the Fire Department, to give both departments faster access to emergencies amid heavy crowds this summer and fall.

The three vehicles cost about $62,000, paid for by one of the seven annual $100,000 payments the city is getting from Salem Hospital’s recent expansion, according to Salem fire Chief Alan “Al” Dionne.

Another $7,000 to $8,000 to be pumped into the fire vehicle will add a 40-gallon water tank, pump and booster reel system, Dionne said. At that point, the Gator becomes its own tiny firetruck for barrel fires and other emergencies that a tanker would have greater trouble getting to.

“All those things in the busy season are brutal, because they’re really hard to get to,” Dionne said. “We use it all year long, and it’s priceless how much work we get out of it, since it’s very well suited to the need. Even for fireworks and stuff, we can bring equipment, get through the crowds with medical gear.”