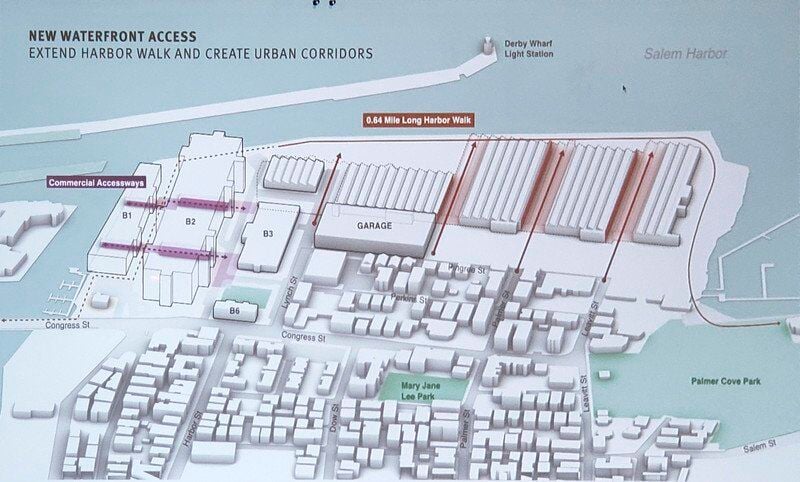 Courtesy GraphicA slide shown to residents attending a meeting on the future of Shetland Park Wednesday night illustrates how paths would be carved through existing buildings to allow for pedestrian access throughout the property and providing two streets in The Point direct water access. 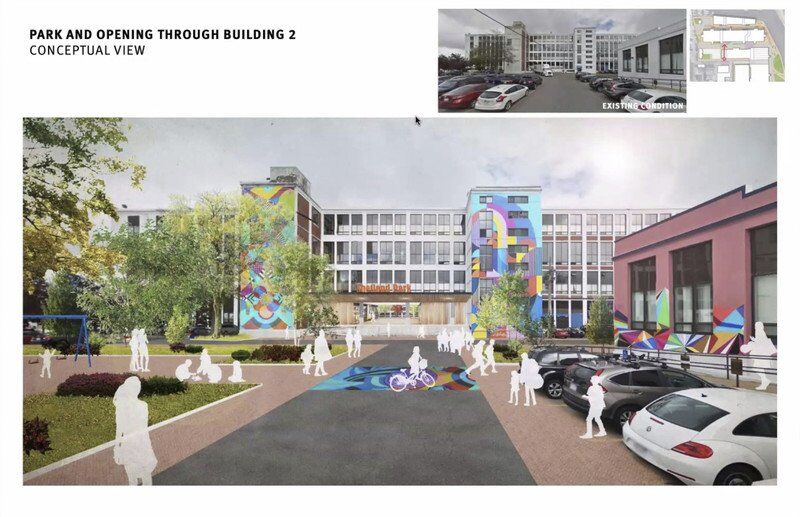 COURTESY GRAPHICSA slide from a presentation given in February by companies seeking to redevelop Shetland Park, showing public art and a ground-level cut-through of Buildings 1 and 2.

Courtesy GraphicA slide shown to residents attending a meeting on the future of Shetland Park Wednesday night illustrates how paths would be carved through existing buildings to allow for pedestrian access throughout the property and providing two streets in The Point direct water access.

COURTESY GRAPHICSA slide from a presentation given in February by companies seeking to redevelop Shetland Park, showing public art and a ground-level cut-through of Buildings 1 and 2.

Designers involved in the property's redevelopment have started meeting with neighbors in an effort to design a project that responds to community needs. The first of several regular meetings to that effect were held in-person at Shetland Park Wednesday evening.

But discussions have been overshadowed by a perceived plan to build 1,425 apartments or condos at the site.

An early application to state authorities, who would conduct an environmental impact review of proposed development in light of the proximity to the waterfront, contained a reference to building that many housing units at Shetland Park. This triggered immediate outcry from the public and even a response from Mayor Kim Driscoll asking them to withdraw the application.

The development team has since done so, they said.

On Wednesday, the neighborhood meeting, which was aimed at showing the property's potential, also dealt with complaints about issues related to the possible housing.

"We aren't going to build 1,425 units. We know that," said Sean Selby, a principal at Arrowstreet, one of the firms designing the project. He said they don't know how many units it would be, but if they file the application with a certain number, they can't later just try to build more units.

Selby later said the state application, which was filed early in the process, was "a mistake."

"The MEPA process can take a couple of years...to get through," he said. "We thought, 'Let's try parallel paths. Let's file with MEPA while also doing the city process.' It totally backfired on us."

Shetland Park was bought by New York-based Prime Group Holdings in 2019 for $70 million — more than double its assessed value at the time. The site was known formerly as Pequot Mills and supported mills for more than 100 years under the Naumkeag Steam Cotton Co., until its conversion by Robert Lappin to an office park in 1958. Today, it has 1.5 million square feet of space spread across five buildings, with Salem Harbor and the South River wrapping three sides of the property.

Chatter about the site's future was quiet until early this year, when designers working with Prime Group started meeting with The Point Neighborhood Association to discuss the future of the property. They held their first in-person meeting Wednesday night, which started with a half-mile walking tour to build context for the new owners' ideas.

"It's very difficult to get to the water," Selby said. "We want to change that. We want to make this a place where the public can walk easily — so that's the purpose of walking it today."

Selby and Patrick Schmidt, a principal and project manager at Avison Young, discussed building a harbor walk using the property's berm, erasing paved parking along the water and instead raising the soil elevation to match the berm's height and adding walking paths and grass.

Pedestrian tunnels would also be installed through the ground levels of Buildings 1 and 2 so people can cross the property without circling around the massive buildings. Building 4, the property's largest structure and current home of the Registry of Deeds, could have tunnels installed to extend Leavitt and Palmer streets, giving the two Point streets direct access to the water.

A 30,000-square-foot grocery store — not a Whole Foods, but something of that scale, they suggested — would solve The Point's food-desert problem, giving homes throughout the mostly minority neighborhood much easier access to food.

That's where the conversation started to devolve. The first to speak was Domingo Dominguez, a city councilor-at-large, who was quick to oppose the supermarket.

"You know what happens when a big corporation or big supermarket comes. What about the bodega that has been there for 30, 40 years?" Dominguez said. "You'll kill some of the small businesses, the moms and pops that have been in this community for many, many years."

But Lucy Corchado, president of The Point Neighborhood Association, was quick to respond.

"The food desert was mentioned at a couple of the meetings, and I think that's where the idea of potentially putting a supermarket (at Shetland) was discussed, depending on what type of supermarket," Corchado said. "I don't think it'll impact the bodegas, because we see a lot of the folks who will continue purchasing their cultural foods in the bodegas, where they can't find it in the regular supermarket."

"When I saw that this morning, it woke me up," she said. "That was my cup of coffee."

Others opposed to the idea of housing at Shetland Park included Salem resident Fran Riggieri, who said redevelopment of the site should focus on bringing in more higher-paying jobs to Salem.

"We have enough housing — and then part of it is supposed to be affordable housing, and you can't afford it. The affordable can't be afforded by the lower-income population," Riggieri said. "We need to bring good-paying jobs so people can rent places and afford to rent them, and afford to buy them. Right now, we don't have that."

This article has been updated since its original publication to correct the spelling of Arrowstreet.