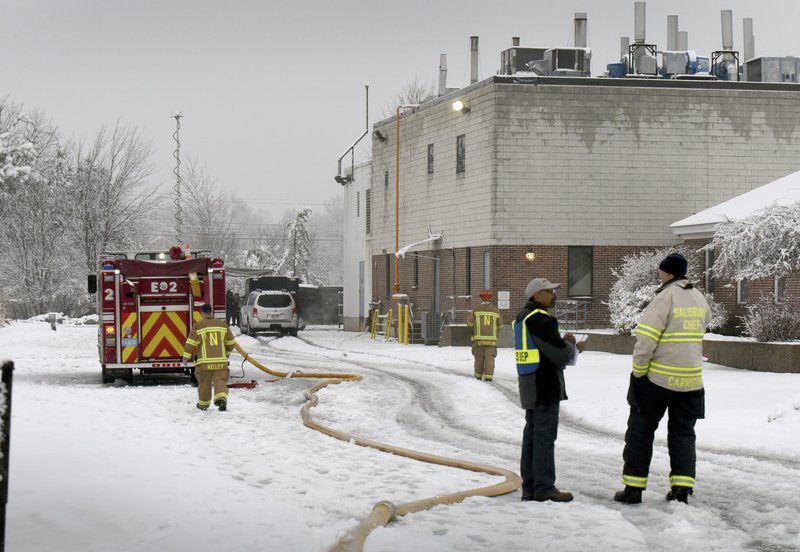 BRYAN EATON/Staff Photo. Fire and hazmat crews responded to explosions at PCI Synthesis on Opportunity Way in Newburyport. No injuries were reported. 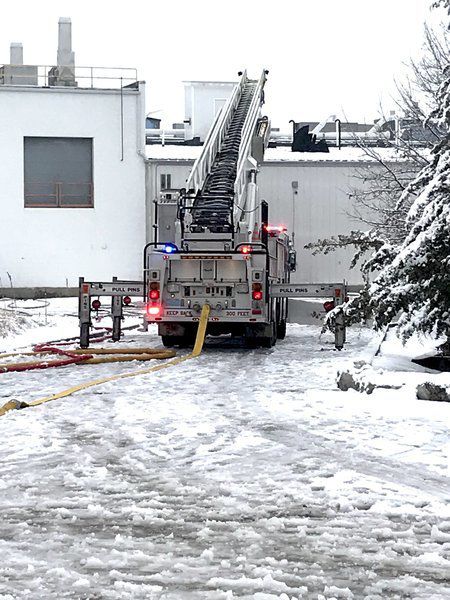 DAVE ROGERS / Staff Photo . A 5-by-8-foot hole blown in the roof of PCI Synthesis Thursday morning is visible to the right of the ladder in this photo. 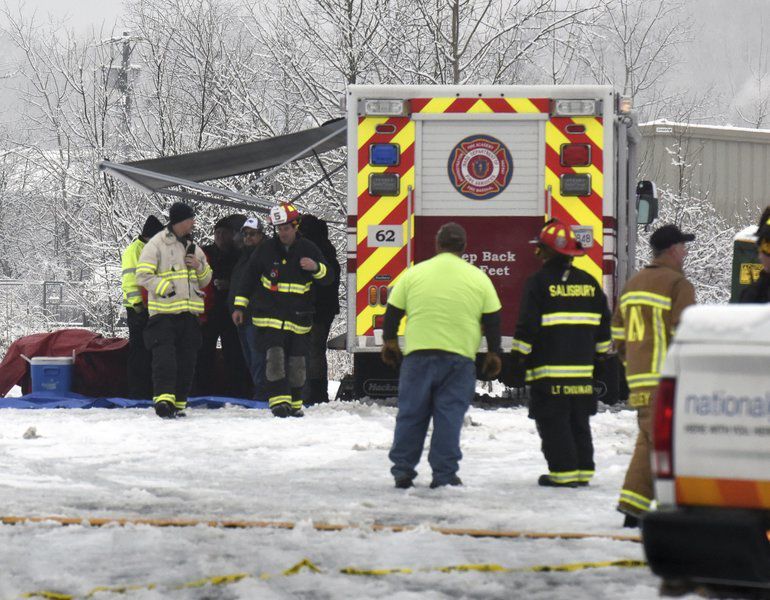 BRYAN EATON/Staff Photo. Fire and hazmat crews responded to explosions at PCI Synthesis on Opportunity Way in Newburyport. No injuries were reported.

DAVE ROGERS / Staff Photo . A 5-by-8-foot hole blown in the roof of PCI Synthesis Thursday morning is visible to the right of the ladder in this photo.

NEWBURYPORT – No one was injured after a series of explosions Thursday morning inside a pharmaceutical chemical company at the city's industrial park. But the explosions inside PCI Synthesis' manufacturing plant forced the evacuation of three businesses near the Opportunity Way complex.

Newburyport Deputy Fire Chief Stephen Bradbury said when firefighters responded to a fire alarm call around 4:30 a.m. they saw smoke inside the plant. While firefighters were investigating, three explosions took place in a different room.

Once they were out of the building, three more explosions occurred, ripping a 5-by-8-foot hole in the roof.

A state hazmat team arrived and firefighters evacuated three businesses adjacent to PCI. Officials said the cause of the explosions was still under investigation Thursday afternoon. Authorities sent a robot into the area where the explosions occurred to determine whether it was safe for firefighters and others to reenter, Bradbury said.

After conferring with police and fire officials about the explosions, school officials opened nearby schools which were closed by a weather-related two hour delay. Most of the city’s schools are close to the blast site.

By noon, firefighters and the hazmat team had gone into the plant to investigate.

Soon after the explosions, PCI Synthesis' parent company Seqens tweeted, "We're working diligently with local authorities after reports of an explosion at our Newburyport facility. All employees on site were safely evacuated; no injuries reported. We will provide more information when we learn more. Thanks to police & fire for their quick response."

The factory operates 24 hours a day. Fewer than 10 employees were working at the time of the initial explosions and they left the building safely, according to a press release.

Because the plant stores and uses chemicals, firefighters declared a Tier 2 Hazardous Materials Incident, which activates a regional team of specially trained professionals and specialized equipment to come to Newburyport.

After the robot conducted tests officials determined that there was no danger to the surrounding community.

By 1:30 p.m. emergency responders had left the building and turned it over to the owners.

Salisbury, Hampton N.H., Haverhill and Amesbury Fire Departments, and the Department of Fire Services provided mutual aid. The Newburyport Police Department was on scene and also directed traffic. The Occupational Safety and Health Administration also responded to the scene.

In its manufacturing process, PCI Synthesis generates hazardous wastes such as toluene, methylene chloride, acetone and methanol, according to the federal Environmental Protection Agency.

In 2019, the EPA ordered PCI Synthesis to pay more than $200,000 after an 2017 inspection of the plant showed that it was violating federal and state hazardous waste laws. The company agreed to pay a $50,210 fine and spend $152,000 on projects to protect human health and the environment.

To settle the charges PCI Synthesis agreed to buy and operate a system to monitor emissions of hazardous wastes and other gas emissions inside the manufacturing and laboratory areas of its facility. The company will also plant 63 trees in Newburyport to  reduce air pollution in the area, the EPA said, in a press release.

In 2015, PCI Synthesis was fined $4,950 by OSHA for a violation the agency classified as "serious" involving 23 people. The fine was reduced to $2,970 after the company filed an appeal, according to an OSHA database.

In 2010, OSHA fined PCI Synthesis, then known as Polycarbon Industries Inc., $15,000 for six safety violations, five of them deemed "serious." The company appealed the fines and saw them reduced to $8,750, according to OSHA.

In 2006, the Environmental Protection Agency accused Polycarbon Industries Inc., of violating numerous requirements of federal and state hazardous waste laws. The violations included  failure to conduct personnel training, failure to separate incompatible wastes, and failure to comply with tank and air emission standards. The last violation could have resulted in potentially hazardous air emissions, according to an EPA press release.

With more than 120 employees, PCI Synthesis manufactures chemicals for the pharmaceutical industry. According to its website, the PCI Synthesis's manufacturing facility is over 75,000 square feet and is equipped with 22 reactors, providing more than 20,000 gallons of total capacity.

PCI Synthesis also operates research and development laboratories and what is known as Kilo laboratories in Devens. The labs are equipped with glass reactors, fume hoods, stainless steel filters, rotary evaporators and other mechanisms used to develop drug ingredients, according to its website.

It has earned dozens of leadership awards and was named Best New Chemical Entities Manufacturer for 2016 by "Healthcare & Pharmaceutical Magazine."

In an email statement Thursday afternoon, PCI Synthesis said the explosions "affected only one production suite, and 85% of the building is unaffected. Currently local authorities continue to assess the facility, and we are working closely with them.

"We have not been allowed inside the building yet. The immediate causes have not yet been determined," the email said.

The statement said PCI is regulated and inspected by OSHA and the EPA, "as well as other agencies to ensure the utmost safety and environmental standards in all of our facilities. Our Environment, Health and Safety (EHS) staff works closely with all of those agencies on a continuous basis. We have an excellent environmental and safety record which we work hard to maintain and are very proud of."

The fine imposed by the EPA in 2019 was for "issues mainly related to the robustness of our documentation system; at no time was employee safety at issue."