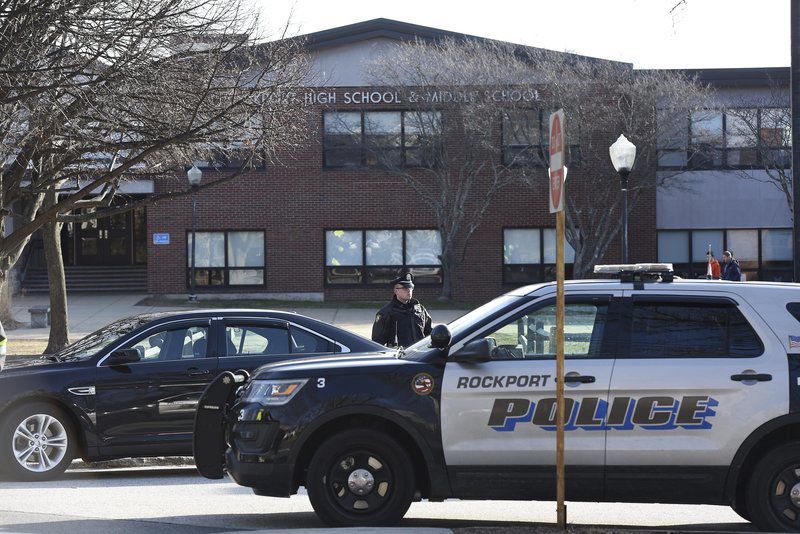 PAUL BILODEAU/Staff photo. A Rockport police officer stands near the entrance to the combined Rockport Middle and High School on Jerden's Lane after a middle school student stabbed another student earlier Monday. 1/6/20 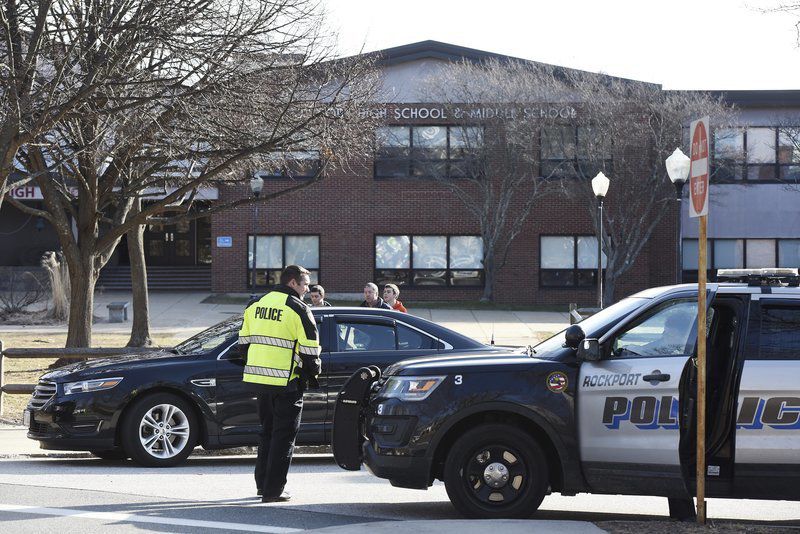 PAUL BILODEAU/Staff photo. A Rockport police officer stands near the entrance to the combined Rockport Middle and High School after a middle school student stabbed another student earlier Monday. 1/6/20 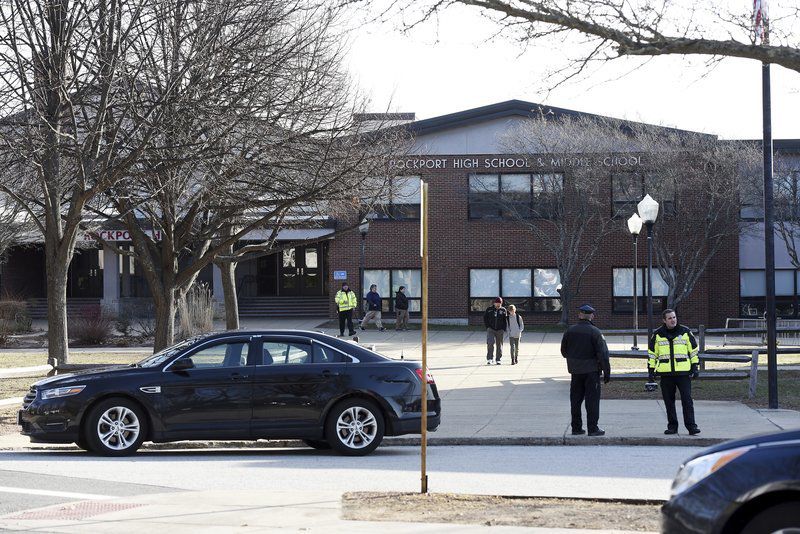 PAUL BILODEAU/Staff photo. A Rockport police officer stands near the entrance to the combined Rockport Middle and High School on Jerden's Lane after a middle school student stabbed another student earlier Monday. 1/6/20

PAUL BILODEAU/Staff photo. A Rockport police officer stands near the entrance to the combined Rockport Middle and High School after a middle school student stabbed another student earlier Monday. 1/6/20

ROCKPORT — A Rockport Middle School girl was transported to Beverly Hospital on Monday morning with what police described as serious but non-life threatening injuries, and a male classmate was in custody, following a stabbing that occurred in a hallway of the school.

Rockport police and the rescue squad responded to the school at 26 Jerden's Lane at 7:30 a.m. on report of the assault and found "a juvenile female student suffering from an apparent stab wound," according to a statement released by police Chief John Horvath.

Horvath said his department's school resources officer was in the building at the time of the assault and responded immediately.

Police said the alleged assailant — a 13-year-old boy — was quickly apprehended and arrested by police after reportedly fleeing the scene.

Police did not identify either the victim or alleged assailant because they are juveniles.

Police also did not disclose the specific weapon used in the stabbing.

Horvath said the teen faces numerous charges, but did not elaborate further. Carrie Kimball, spokeswoman for Essex District Attorney Jonathan Blodgett, said the teen was arraigned Monday afternoon in juvenile court in Salem. She said at Judge Kathryn Phelan-Brown’s direction, no further information will be released at this time.

The school was put on lockdown quickly after the incident.

"Once the suspect was placed in custody, police and the superintendent of schools determined that it was safe to lift the lock-down and allow the school day to continue," according to the Rockport police statement.

Even after the lockdown was lifted about 9 a.m., Rockport officers remained a significant presence on the campus that houses both Rockport Middle and High School.

Rockport Public Schools Superintendent Robert Liebow issued a notice shortly after 9 a.m. to parents alerting them of "a serious physical assault" involving two students in the hallway of the school.

"They (police) will be here throughout the day today," Liebow stated in his notice. "Of course, as parents you have the right to dismiss your students as you see fit."

Neither Horvath nor Liebow immediately responded to requests for additional information.

As the morning unfolded, several officers were stationed on the grounds near the entrance to the school while a sizable media contingent was sequestered across Jerden's Lane, their cameras and full attention pointed at the school.

In the air, at least one Boston television station's helicopter hovered over stretches of the scenic seaside town.

Just before 10 a.m., several parents showed up the middle school to remove their children from classes.

Liebow had also requested assistance from the Gloucester schools to provide social service staff and counselors to help students deal with any emotional trauma from the incident. Those staff members came from Gloucester High and O'Maley Innovation Middle School, according to Gloucester Superintendent Richard Safier.

Safier, in a notice to Gloucester parents, said he "felt it was important to let you know because I am sure that many students here in Gloucester have heard the news and they will be reacting to the situation."

He also said he understood that both of the students involved were seventh-graders at Rockport Middle School.

A Dean Road resident believes he may have seen the alleged assailant right after the incident occurred, in an isolated stretch of undeveloped wetlands that abut his backyard, about a block from the school.

"It's about an acre and cut off from any road and inaccessible," Nathaniel Mulcahy said in a phone interview. "Only the locals know about it. This morning, we saw a fox there and we frequently see deer, turkeys, coyotes and birds."

Mulcahy said he was in his backyard with his 3-year-old twins, going about their morning breakfast ritual of feeding the birds when some movement caught his eye.

"There was a young man in the middle of the swamp trying to get through some really thorny stuff," Mulcahy said. "That was very unusual and the first sign something wasn't quite right. The real tipoff is when you start seeing helicopters in Rockport. Helicopters in Rockport never mean good news."

He said the youngster, whom he estimated to be about 5-foot-7, was about 15 feet away from him and was clearly visible.

"In our neighborhood, everybody waves to everybody," said Mulcahy, who is running for the 6th Congressional District seat held by U.S. Rep. Seth Moulton. "Before I could have a chance to wave, he (the person) dove down onto his belly."

Mulcahy, who still wasn't aware of the stabbing, ushered his children into the house and served them breakfast. At one point, he glanced back outside to see if the boy was still there.

"I saw him still lying down in the mud," he said.

He then called police.

Sorry, there are no recent results for popular articles.