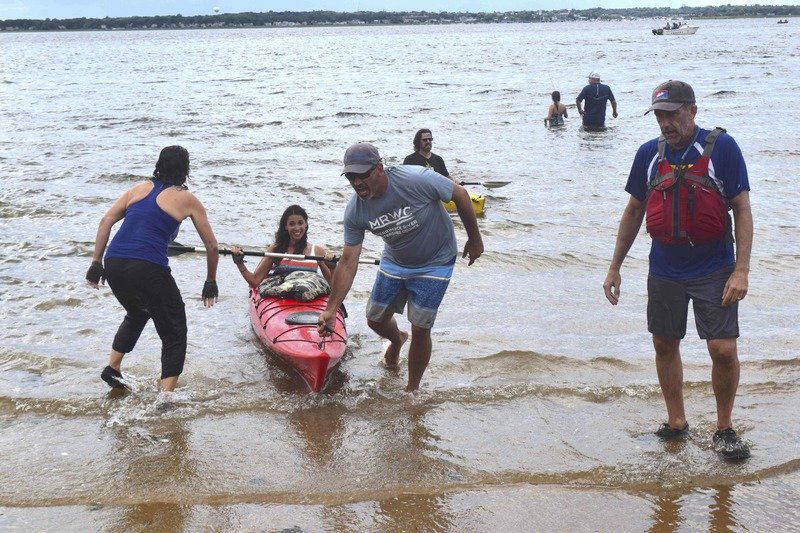 RICHARD K. LODGE/Staff photoState Sen. Diana DiZoglio gets a hand getting her kayak onto the beach Saturday afternoon from, left, state Rep. Christina Minicucci, and Dan Graovac, both of whom completed the trip along with Northern Essex Community College President Lane Glenn, at right. 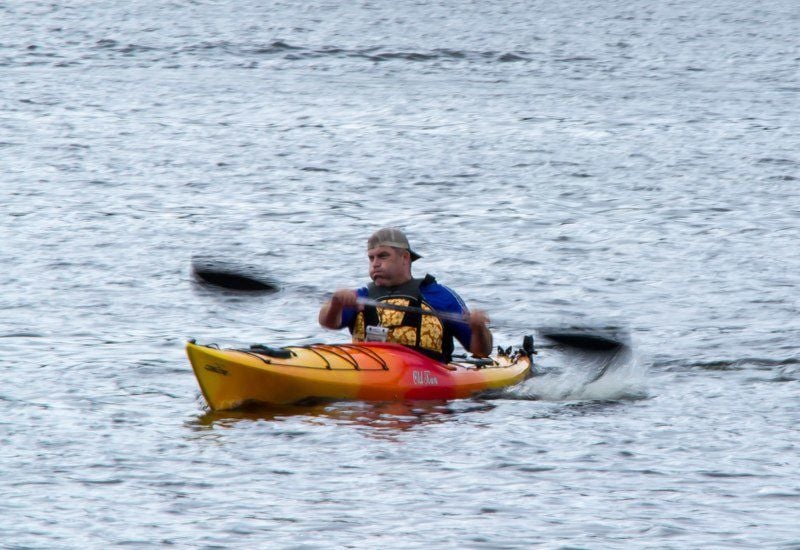 Pamela Leavey/Courtesy photoState Rep. Jim Kelcourse, R-Amesbury, puts his all into paddling near Lowell's Boat Shop on the Merrimack River in Amesbury on Saturday as the voyagers headed toward their destination on Plum Island. 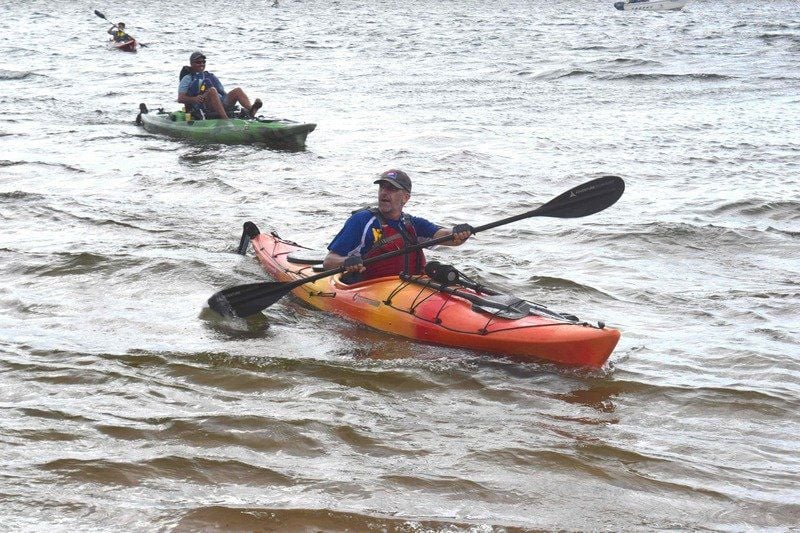 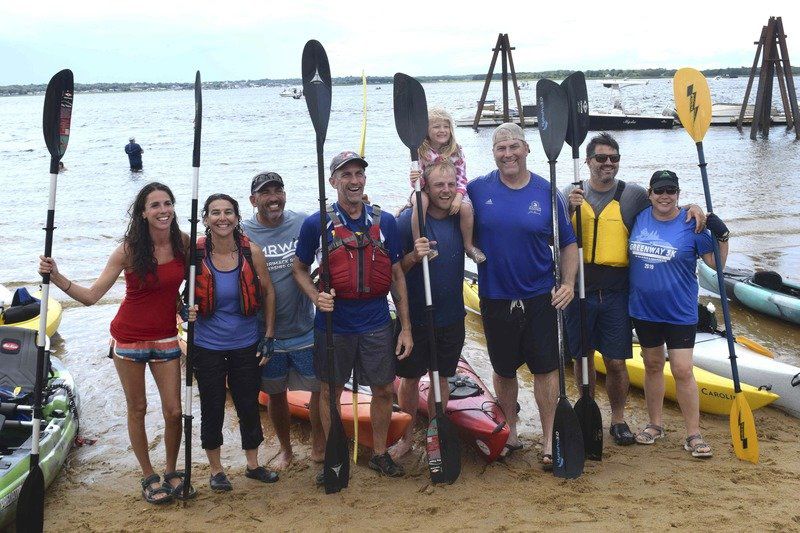 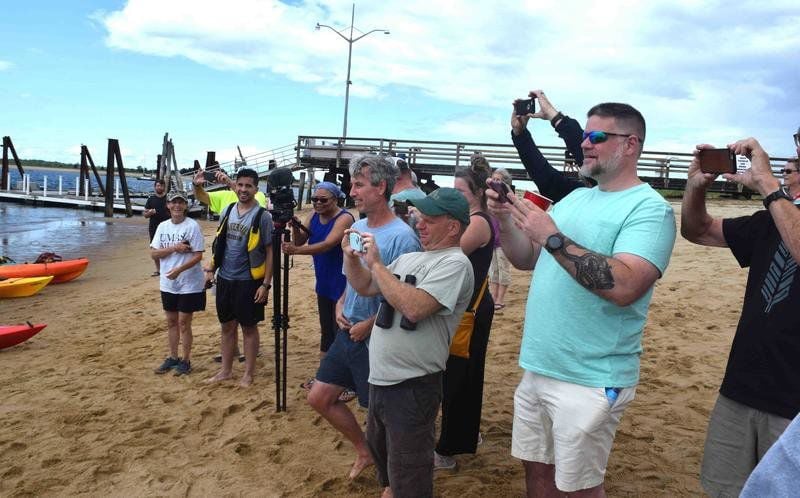 RICHARD K. LODGE/Staff photoState Sen. Diana DiZoglio gets a hand getting her kayak onto the beach Saturday afternoon from, left, state Rep. Christina Minicucci, and Dan Graovac, both of whom completed the trip along with Northern Essex Community College President Lane Glenn, at right.

Pamela Leavey/Courtesy photoState Rep. Jim Kelcourse, R-Amesbury, puts his all into paddling near Lowell's Boat Shop on the Merrimack River in Amesbury on Saturday as the voyagers headed toward their destination on Plum Island.

NEWBURYPORT – After four days paddling through scenic landscapes, sudden rainstorms, challenging rapids and invisible sewage released into the waters around them, a cluster of kayakers landed at Plum Island Point on Saturday, marking the end of a 117-mile trek to shine a light on the Merrimack River.

Eight voyagers set off Wednesday from Franklin, New Hampshire, led by Northern Essex Community College President Lane Glenn and Dan Graovac, president of the board of the Merrimack River Watershed Council, to highlight the importance of the river to the economic, environmental and recreational picture of the region.

Attention has focused on the Merrimack in the past year and a half with publicity about frequent discharges of millions of gallons of untreated sewage — called combined sewer overflows, or CSOs — from some treatment plants from Manchester, New Hampshire, to Haverhill.

These discharges often happen during storms when runoff combines with sewage at plants that can't handle the volume. Several plants reported CSOs on Wednesday during a rainstorm that drenched the kayakers and prompted them to spend the first night in the home of a supporter of the trip. They camped the following two nights and slept in tents next to the river.

Along the way, they met with local and state officials in both states to talk about how to improve the river quality, and were joined for stretches of the trip by others.

State Rep. Jim Kelcourse, R-Amesbury, one of the four-day voyagers, said the "goal was to learn more about the Merrimack and the importance of protecting it, from an environmental standpoint, but also acknowledging the economic benefit it has for communities" from Newburyport to the river's source in New Hampshire.

Kelcourse, who said he had never kayaked seriously until this trip, ran rapids along the way but was upended in rough water in Hooksett, New Hampshire.

"We went through rapids and I went upside down," he said. "It was fun, though. You look at this trip, it was such a positive experience. We've heard so much about pollution in the Merrimack and what we need to do to address it. But to really appreciate it, you've got to get out on the river and see it, firsthand."

He cited the camaraderie that developed among the group and said what they learned will help them work with the federal Environmental Protection Agency and members of Congress to get the funds needed to fix aging city stormwater and sewer systems.

"It's a team effort," he said. "The team working together to come up with solutions to address this.

"It's going to take federal help to make all that happen, real investment from the federal government," he said. "That's why we're working closely with the EPA and our congressional delegation on a solution to highlight how important it is to protect this amazing natural resource we have."

State Sen. Diana DiZoglio, D-Methuen, who won support on Beacon Hill for her bill to create the Merrimack River Task Force, said she had never kayaked for more than a couple of hours on leisurely trips, so this trek was new terrain.

"It was very, very difficult but a lot of fun and a great experience," she said Sunday. "It was a mind-over-matter experience where even if you don't feel you can make it, you keep encouraging yourself. I was motivated, too, by everyone in the group. We really did a lot of encouragement with one another and cheered each other on."

DiZoglio said at first she thought about joining the group to paddle through only part of her district — not the full 117 miles.

"But I saw challenges of getting my legislation passed and getting the attention I wanted to have focused on the river, so I decided this was a great opportunity to participate in the entire trip and draw attention not only to the legislation, but to the overall need to focus on the health of the Merrimack River."

The group met with many people along the way, including officials in New Hampshire.

"It was a great opportunity to connect with them on their turf and to let them know we were there because we want to partner with them," she said. "We are coming to the table to collaborate with them on the Merrimack River and moving forward.

"The goal of this entire group is that we hope it wasn't just a one-time thing," DiZoglio said. "We hope we're going to inspire a movement to bring consistent focus on the need to keep the Merrimack River clean and healthy."