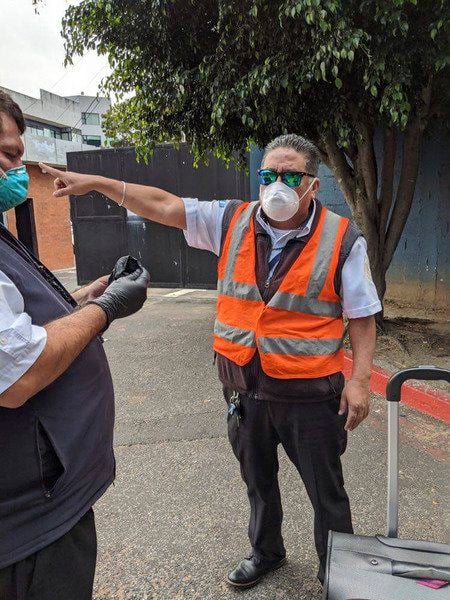 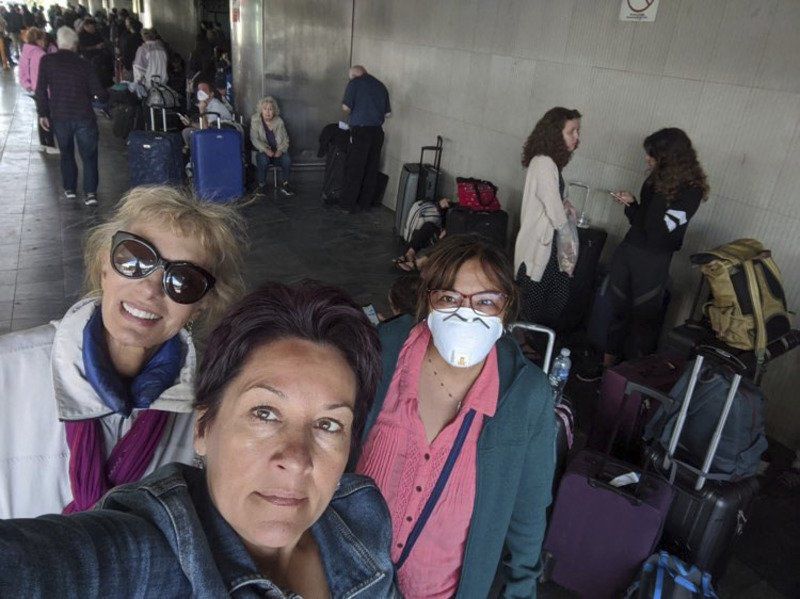 Courtesy photo/Waiting for a flight home to the US at La Aurora International Airport in Guatemala City are, from left, Rosalyn Rourke of Florida, Beverly Manzano of the Bay Area in California, and Saleha Walsh of Andover. 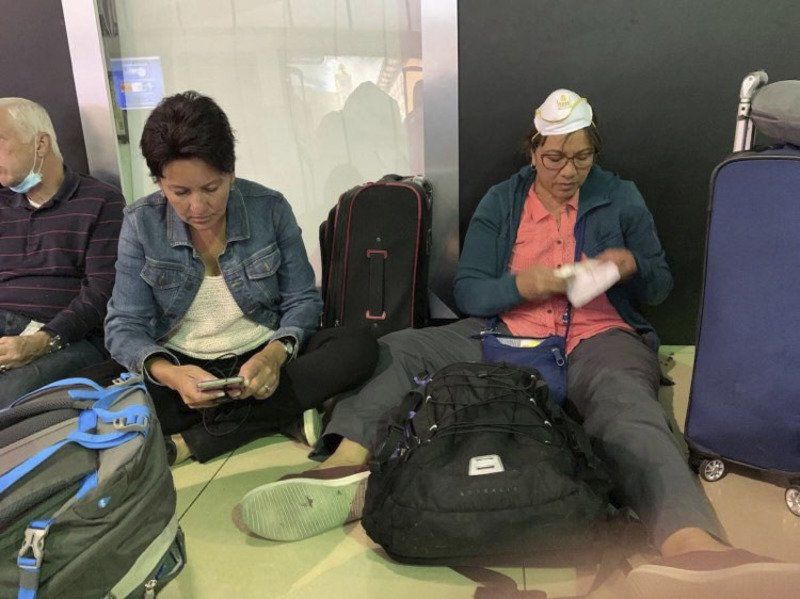 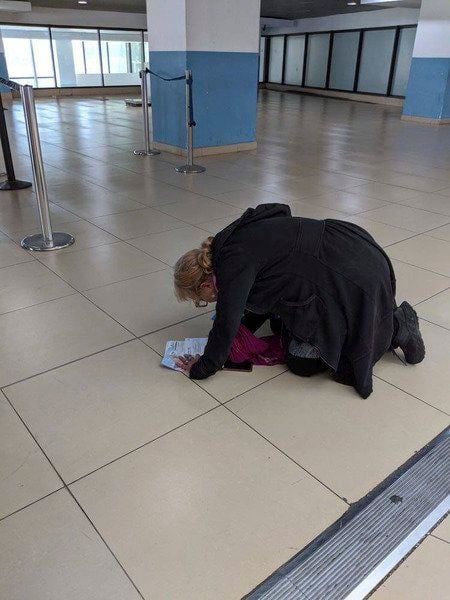 Courtesy photo/Rosalyn Rourke of Florida checks flight schedules at La Aurora International Airport in Guatemala City, looking for a way to get home.

Courtesy photo/Waiting for a flight home to the US at La Aurora International Airport in Guatemala City are, from left, Rosalyn Rourke of Florida, Beverly Manzano of the Bay Area in California, and Saleha Walsh of Andover.

Courtesy photo/Rosalyn Rourke of Florida checks flight schedules at La Aurora International Airport in Guatemala City, looking for a way to get home.

Through a series of events in their lives, a group of women in pursuit of writing their own memoirs found themselves in a small village west of Guatemala City.

Now, two weeks later, three of them — Saleha Walsh of Andover, 72-year-old Rosalyn Rourke of Florida and Beverly Manzano of San Francisco — are trapped at La Aurora International Airport in Guatemala City as they try to find a flight home in the midst of the novel coronavirus pandemic.

"I've been better," Walsh told a Times reporter on Monday morning via phone as she waited in long lines at the airport. "Oh my gosh, it is so chaotic."

"Disorganization. Poor communication. No signs here. Travel ban was on for 15 days that is still on as far as I know," Walsh texted.

On March 13, a day after the writers arrived in the country, Guatemalan President Alejandro Giammattei banned arrivals from the United States and Canada.

"We are therefore announcing that everyone who arrives from Canada and the United States between now and midnight on Monday will be subject to quarantining," Giammattei said in a televised address.

Hundreds of travelers from around the world are now rushing to find a flight home as the virus is projected to get worse before it gets better.

Throughout the day Monday, Walsh sent the Times reporter photos and video footage of events unfolding at La Aurora airport.

This included an increased number of military personnel present, passengers wearing masks in long lines, and the beginning of what Walsh reported to be bathroom riots — people trying to gain access to the restrooms while waiting for a flight.

An adventure of a lifetime

Walsh was one of 16 women chosen to travel to Guatemala for a writing workshop hosted by acclaimed American novelist and former The New York Times writer Joyce Maynard.

While a few dropped out prior to the journey, eight women traveled to Lake Atitlan to write under the tutelage of Maynard.

"We ranged in age, in ethnicity, in life experience and location," Walsh said, explaining that they would workshop at Maynard's house and stay at a hotel in San Marcos. "It is a beautiful location surrounded by volcanoes."

But the blissful workshop experience did not last long.

"Obviously we knew what was going on because of our family," Walsh said. "We would workshop all day and then try and justify that we were probably safer there than we were at home."

She explained that over the course of their stay in San Marcos, the women became increasingly uncomfortable.

"When we were in San Marcos, which is a small village, everyone was really warm and then like within three days all the restaurants shut down and then sometimes people would walk by us and block their nose," Walsh said.

As concerns of the spread of COVID-19 ramped up both stateside and abroad, Walsh's three children — who live on the North Shore, in Newburyport, and in Boston — begged her to come home.

"They were insistent that I leave so there was a lot of debate and angst and all of that of what we should do," she explained. "There weren't any flights so we decided to wait it out."

"We were encouraging her not to go from the start," Kara Walsh explained. "(The spread of the virus) was obviously an issue but it wasn't to the measures that it is now, so we were warning her not to go, but she really wanted to go."

"It is very stressful for everyone," Kara Walsh added.

The past couple of days

The three women from Andover, Florida, and California eventually decided to book an expensive flight on Eastern Airlines — an airline they had previously presumed to be out of business.

"We booked it and it was $1,000 so we didn't know if we were being scammed or what the story was," Saleha Walsh said.

After confirmation that Eastern Airlines was in fact flying out of Guatemala City, the three women were notified that U.S. Embassy in Guatemala were also chartering flights for U.S. citizens stuck in the country.

The first two flights departed Monday from La Aurora airport in Guatemala City to the Dallas/For Worth airport and, according to the embassy, additional flights are scheduled for Tuesday, March 24, and Wednesday, March 25.

Two flights will be available each of those days.

"We escalated some of our health issues to get on that flight," Saleha Walsh said of Monday's flight, explaining that it seemed that the Embassy was prioritizing passengers based on health status. "Obviously one woman is 72 and she has some hearing issues. And we also made the case, which is true, that we have children at home who have some health issues. I think that put us up on the list a bit more."

Kara Walsh explained that not everyone who was trying to get out of Guatemala chose to go by air.

"A lot of people seemed like they were crossing over the Mexican border on foot and then trying to get a flight out of Mexico to the United States which I think a lot of people were successful with," Kara Walsh said, citing the Facebook page U.S. Citizens Stranded in Guatemala 3/17/2020.

"Others obviously were hesitant to do that for safety concerns," she added.

As of late Monday afternoon, Saleha Walsh and her travel companions' travel plans were up in the air.

Kara Walsh confirmed that the women were still waiting at the airport as of 4:40 p.m. on Monday.

Other women who attended the writing workshop have decided to stay put in San Marcos for the time being.

They include, Saleha Walsh said, two Canadian residents, a Harvard employee, and a student from Yale.

"It is a pretty tough group of women," she said. "They have been through a lot."