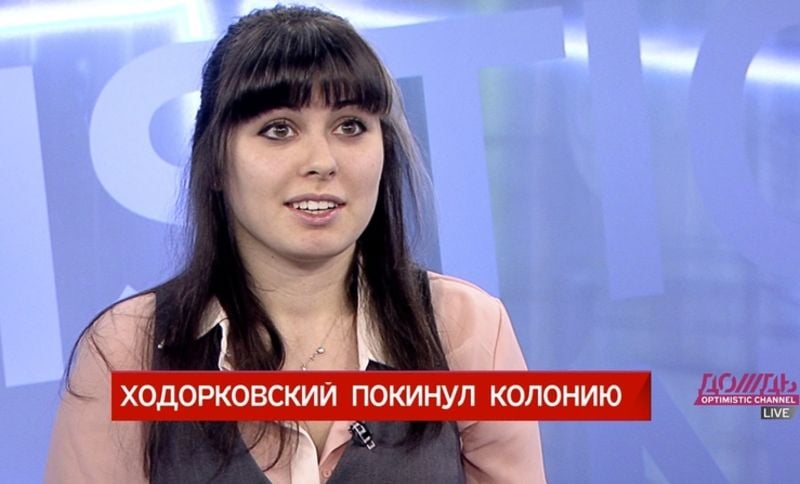 In this video frame grab Mikhail Khodorkovsky's daughter Anastasia speaks in the studio of the Russian TV channel Rain in Moscow, Friday, Dec. 20, 2013. Russia's once richest man, Mikhail Khodorkovsky, the archrival of President Vladimir Putin, has been released from prison after a decade behind bars. Mikhail Khodorkovsky left prison a free man Friday and immediately flew to Germany. The text reads "Khodorkovsky has left prison." (AP Photo/Rain TV via Associated Press Television News) 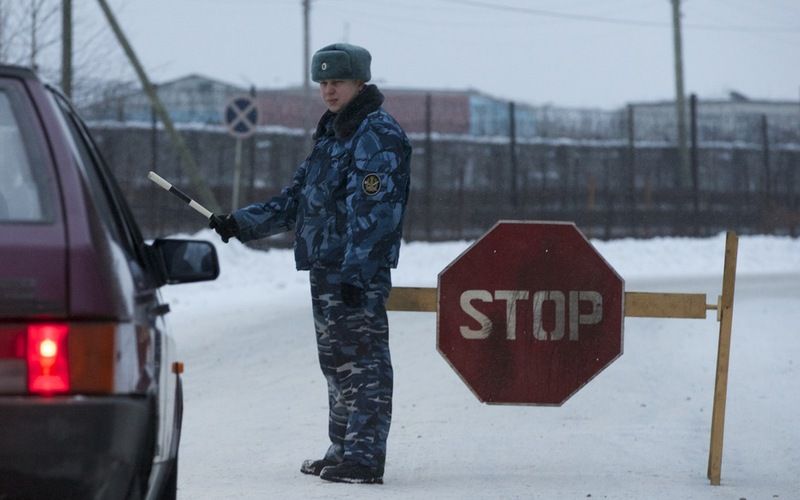 A prison service officer stops a car on the road at the prison where Mikhail Khodorkovsky was kept in Segezha, near Petrozavodsk, Russia.

In this video frame grab Mikhail Khodorkovsky's daughter Anastasia speaks in the studio of the Russian TV channel Rain in Moscow, Friday, Dec. 20, 2013. Russia's once richest man, Mikhail Khodorkovsky, the archrival of President Vladimir Putin, has been released from prison after a decade behind bars. Mikhail Khodorkovsky left prison a free man Friday and immediately flew to Germany. The text reads "Khodorkovsky has left prison." (AP Photo/Rain TV via Associated Press Television News)

A prison service officer stops a car on the road at the prison where Mikhail Khodorkovsky was kept in Segezha, near Petrozavodsk, Russia.

MOSCOW — In a few breathtaking hours, one-time oil baron Mikhail Khodorkovsky went from being a prisoner locked away for a decade in the remote depths of northern Russia to being a free man in Berlin. As he sped between those extremes, questions trailed behind.

Most prominently: Why Russian President Vladimir Putin decided to pardon the man who was once Russia’s richest and one of the few with both the boldness and resources to challenge him.

Putin said he decided to approve Khodorkovsky’s pardon application and let him walk free on yesterday for humanitarian reasons — his mother is seriously ill. The way he announced it, in a scrum of journalists after his annual marathon news conference less than 24 hours earlier, had an air of spur-of-the-moment.

But there appears to have been considerable calculation behind it, and analysts saw it as a show of power and arrogance by the man who has dominated Russian politics since the turn of the millennium.

In the first burst of surprise after the pardon was announced, many speculated that Putin wanted to soften Russia’s baleful image in the countdown to the Winter Olympics, his signature project, which starts Feb. 7 in Sochi.

“Rubbish,” wrote Lilia Shevtsova of the Carnegie Moscow think-tank. “Putin has been all along demonstrating all signs that he does not care any more what the world is thinking of him. He has been showing the opposite: that he views world leaders as pathetic weaklings who can be ignored.”

Although Putin is hypersensitive to opposition and has launched a series of measures over the past year and a half that chill dissent, he appears to have calculated that 10 years as an inmate has tamed the 50-year-old Khodorkovsky.

“Putin understood that Khodorkovsky is not a revolutionary, that his priority goal for all of what remains of his life is the desire not to return to the place he was for the last 10 years,” wrote Stanislav Belkovsky, a political analyst and former Kremlin insider.

Khodorkovsky’s arrest by special forces who stormed his plane at a Siberian airport and his subsequent trials were widely seen as revenge for defying Putin’s dictate that the country’s narrow circle of billionaire tycoons, dubbed “oligarchs,” stay out of politics. Behind bars, he became the leading symbol of anxiety about Russia’s questionable rule of law.

But despite becoming a much sought-after columnist in prison, writing for leading Russian media and corresponding with prominent Russian authors, Khodorkovsky often seemed overshadowed by new controversies — the imprisonment of art-punk provocateurs Pussy Riot, the arrest of Greenpeace activists, the passage of a law banning “gay propaganda” for minors.

Notably, during the four-hour news conference Thursday, Khodorkovsky’s name didn’t even come up, though one question was about the possibility of another trial related to his former Yukos oil company.

His release and arrival in Germany on Friday vaults him back into the spotlight. But Putin, who has built much of his tough image on denouncing “interference” from the West, is unlikely to worry much about criticism from afar and it is unclear if Khodorkovsky ever intends to return to Russia.

“I am very much waiting for the minute when I can embrace my nearest and personally shake the hands of all my friends and colleagues,” the former oil tycoon said in a short statement a few hours after his arrival.

He added a few details about the process that freed him, saying that he filed the pardon application on Nov. 12 and that the question of admitting guilt wasn’t raised.

Khodorkovsky also thanked former German foreign minister Hans-Dietrich Genscher, who met him at the Berlin airport, for his “personal participation in my fate.”

A statement from Genscher’s office said he met Khodorkovsky while head of the German Council on Foreign Relations and agreed to a request from Khodorkovsky’s lawyers to try to help secure his release.

OBO Bettermann, a German energy company that provided the plane that flew Khodorkovsky to Berlin, said it offered it on Genscher’s request.

“The Russian government cannot nurture a modern economy without also developing an independent judiciary that serves as an instrument for furthering economic growth, ensuring equal treatment under law and advancing justice in a predictable and fair way, “ she said.

Khodorkovsky’s father, Boris, told The Associated Press that he and his wife Marina are in Moscow and will fly to Germany on Saturday.

Khodorkovsky’s second wife and three children live in the Moscow region. Pavel, his eldest son from his first marriage, has been campaigning on his father’s behalf and lives with his family in New York City.

Khodorkovsky was Russia’s richest man, worth billions of dollars, and the CEO of the country’s largest oil company, Yukos, when he was arrested in 2003 and charged with tax evasion.

During Putin’s first term as president, Khodorkovsky angered the Kremlin by funding opposition parties and also was believed to harbor personal political ambitions. His actions defied an unwritten pact between Putin and the country’s “oligarchs,” under which the government refrained from reviewing privatization deals that made the group enormously rich.

Khodorkovsky’s Yukos oil company was effectively crushed under the weight of a $28 billion back-tax bill and sold off. Most of it went to state oil company Rosneft, allowing the Kremlin to reassert control of the country’s oil business as well as stifle an inconvenient voice.

Khodorkovsky’s current net worth is unknown, but it’s likely, at most, a mere shadow of his one-time fortune.