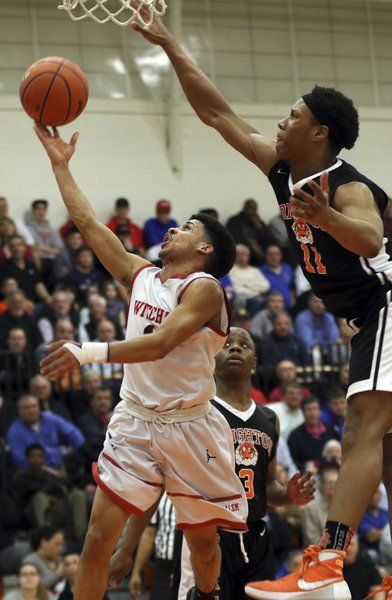 Salem senior guard Alex Sanchez (1) tries to flip a layup off the glass while Brighton junior Tyrone Perry (11) leaps high in the air to record a block. 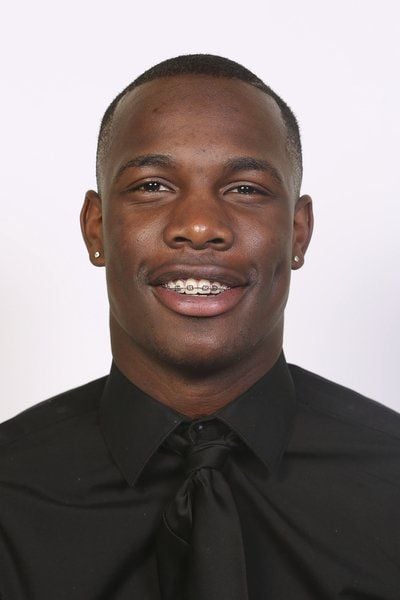 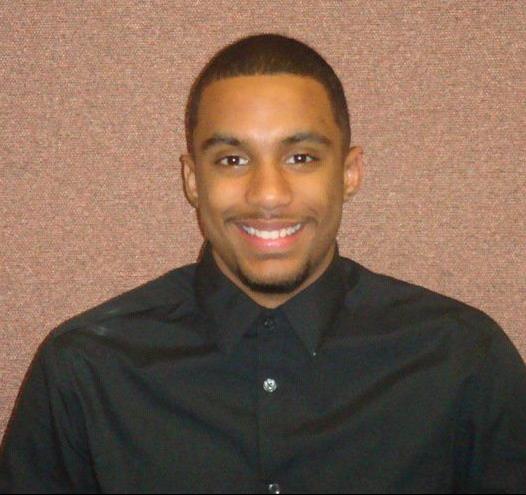 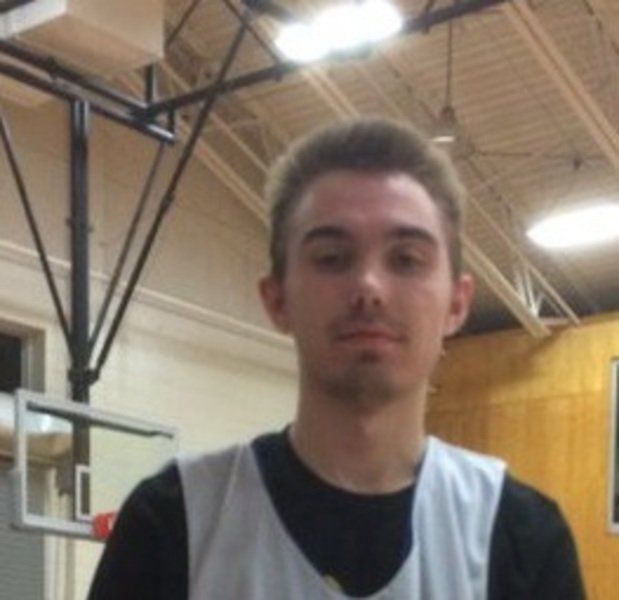 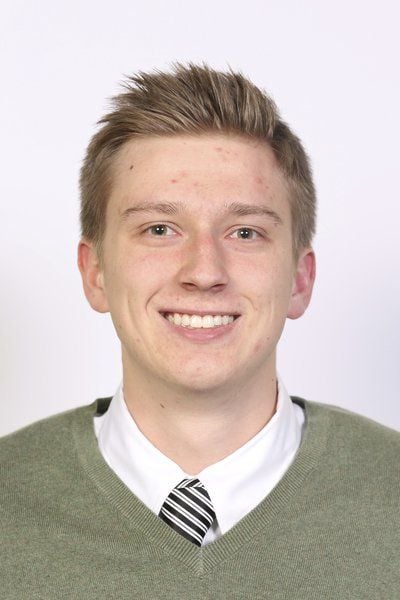 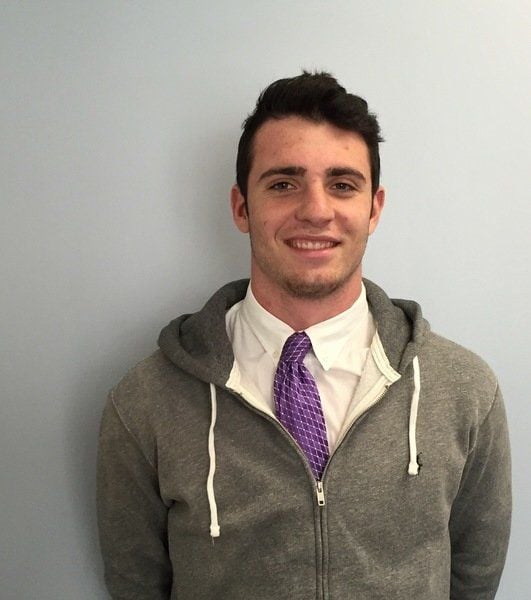 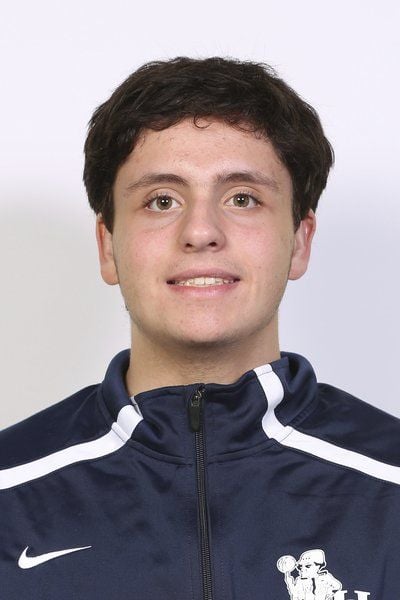 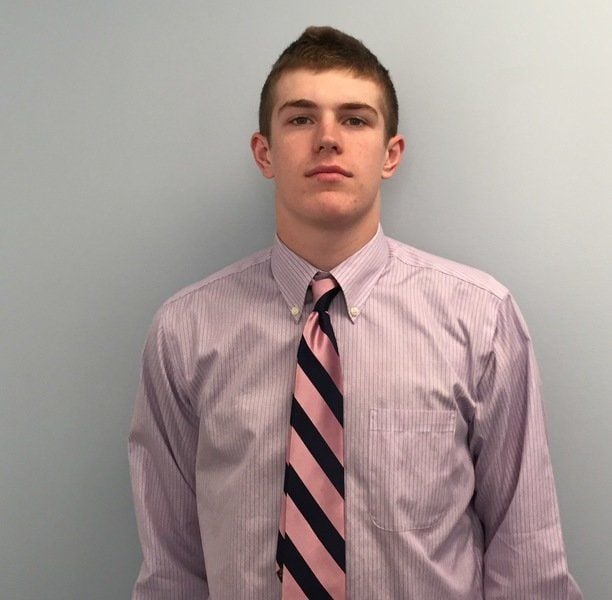 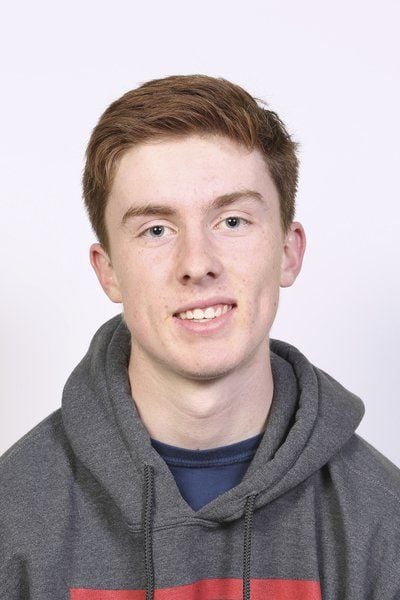 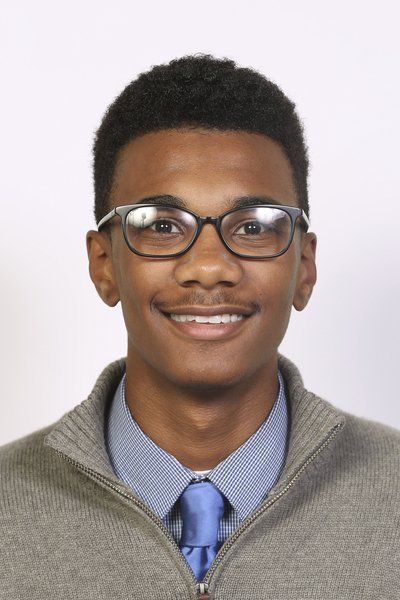 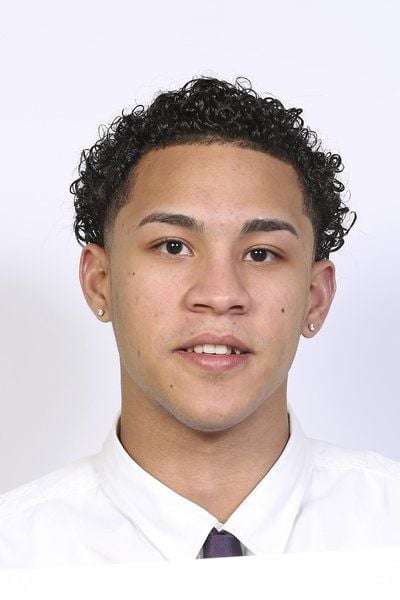 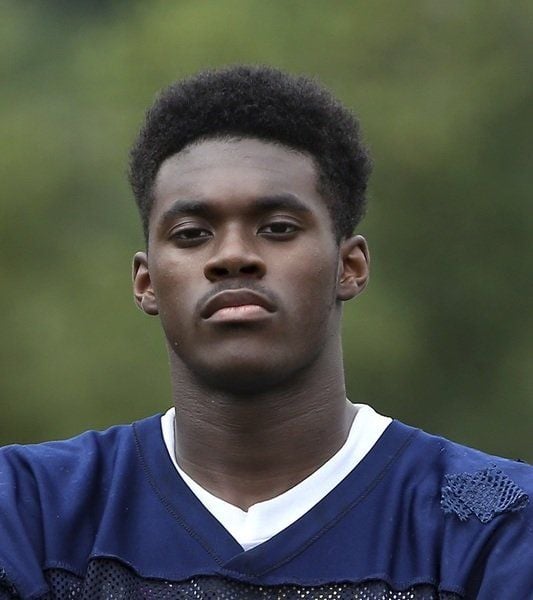 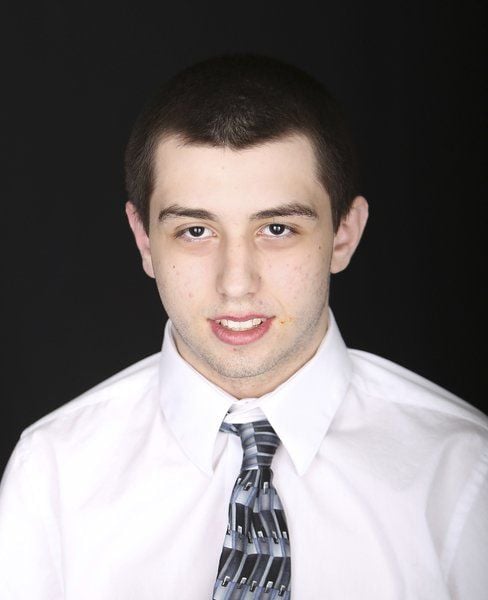 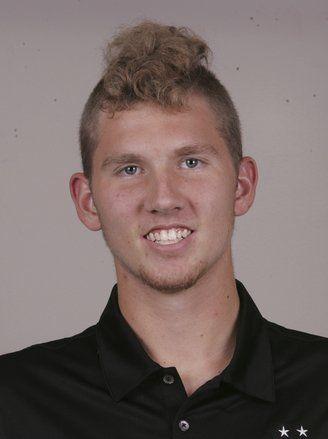 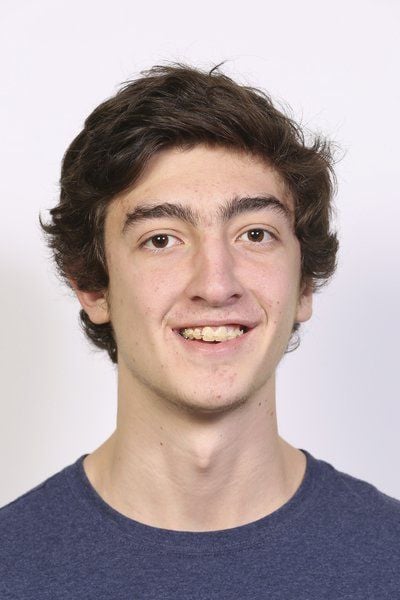 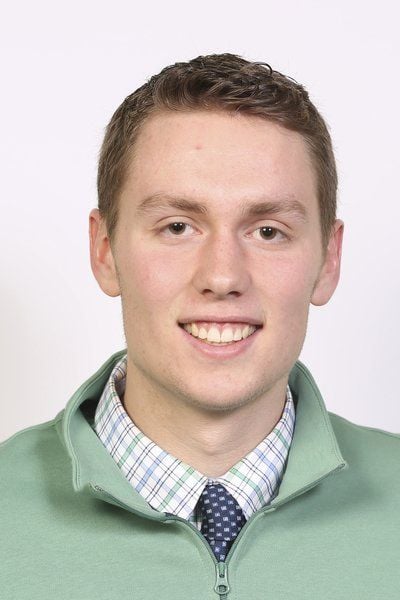 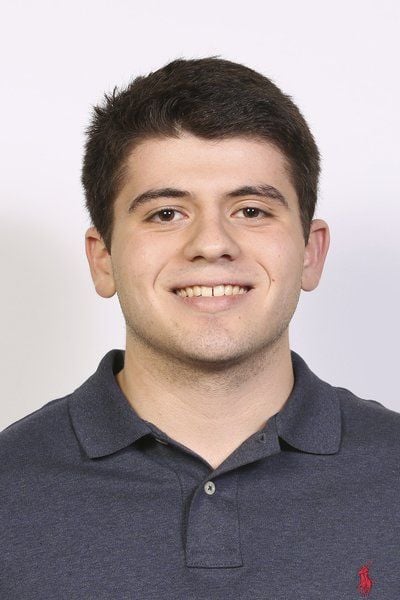 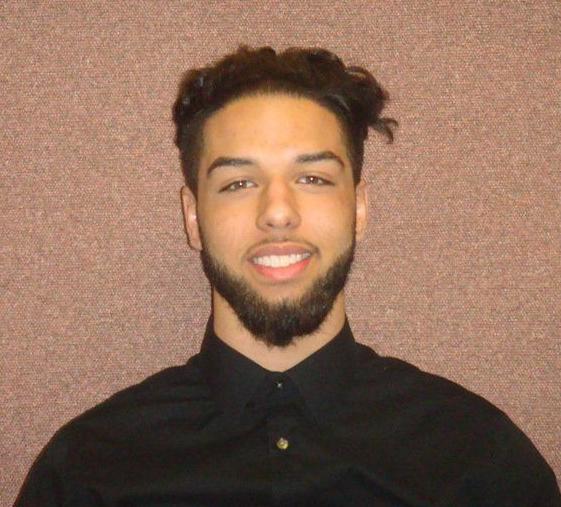 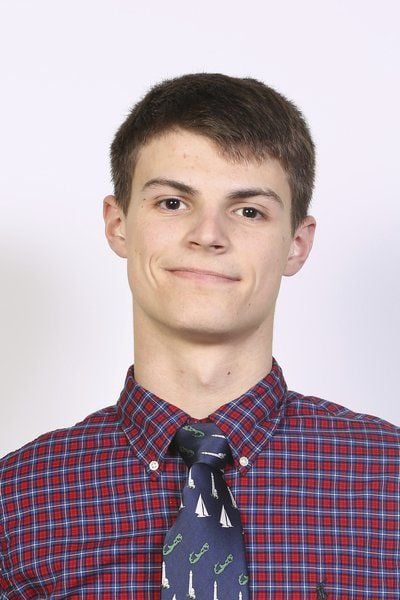 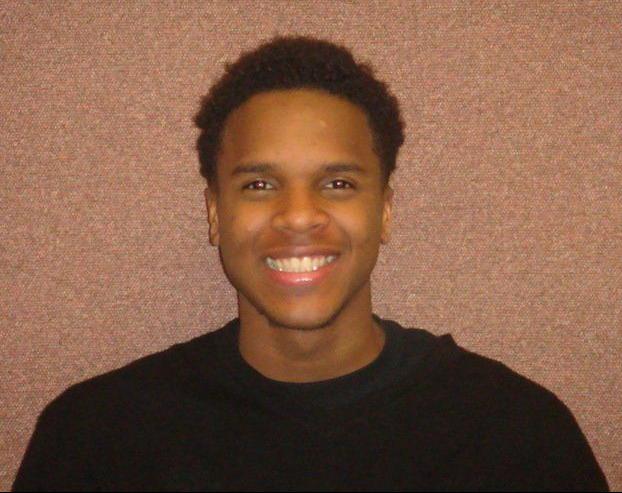 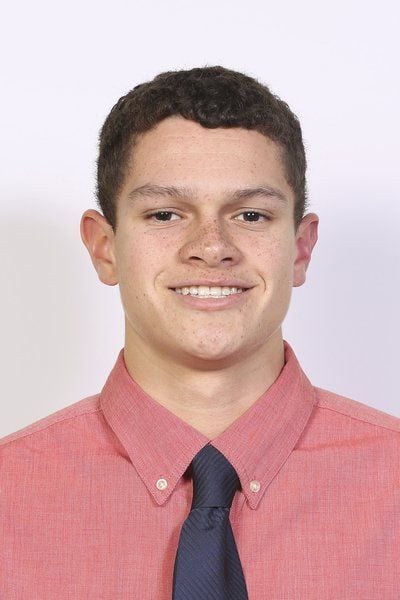 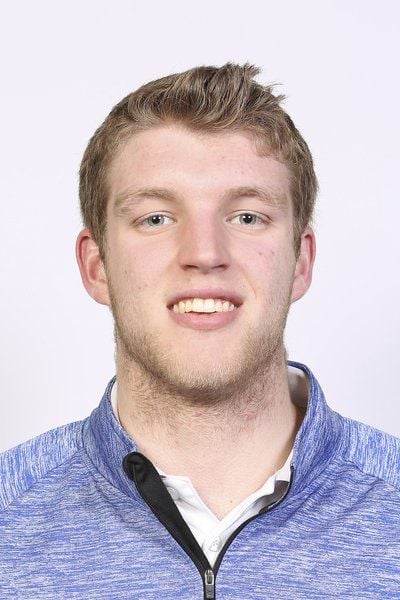 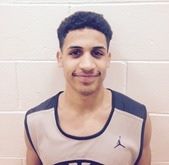 There hasn't been a better example of speed over size on the basketball court in recent years than Salem High's lightning quick point guard Alex Sanchez.

Any defender that stopped to think he could guard Sanchez easily due to his 5-foot-5 frame found himself beaten off the dribble or watching a precision pass sail away before that notion could even be fully formed. It was a banner season for Northeastern Conference Player of the Year, as he led the 21-win Witches in scoring (16.5 points per game) and led the NEC in assists (5.4 per game).

"He had a fantastic season," said Salem coach Tommy Doyle. "He's so quick he can get to the basket with either hand, and if a defender commits he loves that pull-up jumper. We put the ball in his hands, spread the floor, and if they run to him and double him he's going to find the open man."

One of Salem's captains, Sanchez was at his best in the postseason. He poured in 39 points in an overtime win over Wakefield to go with nine assists and six steals; In the Witches semifinal finale against Brighton, he scored 30 points along with 10 assists.

With quickness that was even more effective on the defensive end of the floor, Sanchez had 71 total steals. He also scored 32 in a win over Danvers and 18 in an overtime win over Lynn English that helped Salem go unbeaten in the NEC for the first time in a dozen years; A 21-pointer against D1 North semifinalist Everett was another highlight.

Over the course of their best season since 2004, four different players scored at least 25 points in a game for Salem. That's a credit to their outstanding point guard, who expressed gratitude to his teammates, high school coaches and club coach Andre Daley, who "taught me how to get over fear and just play. He would always compare basketball to life and that helped me get through tough times in both on and off the court."

Lethal shooter had one of the best long-range games in the Northeastern Conference while knocking down 48 three's ... Averaged 16.7 points per game to rank third in the area ... Also handed out 4.20 assists per game without being his team's primary handler ... Repeat Salem News all-star was NEC first-team All-Conference ... Poured in 26 points in win over Malden Catholic ... Helped Falcons in NEC North crown ... Energetic defender also piled up 63 steals.

Tremendous shooter could make opponents pay off the dribble or outside while averaging 15.5 points per game ... Had 29 points in the first half of win over Gloucester while helping Salem go unbeaten in the NEC ... First-team All-Conference pick is an outstanding rebounder for a guard, pulling down 7.7 per game ... Knocked down 49 three's and had a team-high 72 steals ... Scored 20 in overtime win over Lynn English ... Three-sport standout hopes to run track and play basketball in college.

First-time All-Eastern Independent League guard pulled the string for one of the more efficient offenses in New England ... His six assists per game led the North Shore as Pingree reached the NEPSAC championship game (an overtime loss) ... Versatile 6-foot-3 athlete from North Reading could also finish, averaging 15.0 points per game and pulling down 4.0 rebounds ... Quarterback also set Pingree records for touchdown passes and will be playing football at Union College.

Sharpshooting guard buried a North Shore best 69 three-pointers on his way to All-Catholic Conference honors ... Averaged 12.9 points per game ... Also handed out 3.95 assists per contest ... Scored 12 in regular season win over Central Catholic ... Solid defender on the perimeter ... Poured in 21 points in overtime contest against Malden ... Salem, New Hampshire native had 17 in win over Charlestown and made winning basket in victory over Concord-Carlisle.

Outstanding court vision helped this Northeastern Conference all-star run the point as well as any guard under coach Scott Lewis, finishing second in total assists among all Beverly players in the last dozen years ... Handed out 5 assists per game in his senior season ... Notched 21 points and eight assists in win over Revere ... Hit four free throws to help Panthers hold off Marblehead ... Averaged nine points per game and also had 43 steals ... Ranks 30th in Beverly's senior Class ... Committed to play basketball at Clark University.

Maestro on the floor developed into one of the best point guards in the Northeastern Conference ... First-team All-Conference pick helped Danvers win the NEC North in their first season in the division ... Averaged 5.1 assists per game to go with 61 three-pointers and 61 steals ... Scored 25 with eight assists and five steals in win over Wakefield ... Added 18 in Keough Classic win over Framingham ... Ranks in the top-10 of Danvers High's senior class and hopes to study biomedical engineering in college.

Two-time Salem News and Catholic Conference all-star was the go-to scorer for the Eagles at 16.3 points per game ... named MVP of the Larry McIntire Classic held in North Andover ... Scored 25 in a two-point victory over Concord-Carlisle ... Excellent long-range shooter had 44 three-pointers ... Totaled 48 steals ... Exploded for 25 points in state tournament win over Billerica ... Beverly native is undecided but hopes to play in college.

Smooth handler for a big man had 49 assists and 47 steals while helped Hamilton-Wenham reach the Division 4 North semi-finals ... First-team All-Cape Ann League selection blocked a shot at buzzer in win over Triton (with 19 points and nine rebounds in the game) ... Shot 43 percent in the paint and showed range by also making 31 three's ... Averaged 8.9 points per game and five rebounds ... Team captain considers his brother Paul his top motivator.

Six-foot-3 force blocks and rebounds with a forward's ferocity while shooting like a guard ... One of three players in the area to average a double-double ... Led the Northeastern Conference in scoring at 17.5 points per game ... NEC all-star pulled down 10.6 rebounds and two blocks a night ... Poured in 35 points and grabbed 20 rebounds in Peabody's momentous win over Lynn English ... Enjoyed another 31-point outburst vs. Revere ... Consistent scorer was in double figures in 19 of Peabody's 23 games.

Remarkably consistent shooting guard averaged 16.5 points per game on the way to first-team All-Northeastern Conference recognition ... Notched season-best 31 points in Keough Classic win over Framingham ... Also scored 30 against Lynn English ... Six-footer had no problem battling bigger players while pulling down 7.1 rebounds per game ... Led the North Shore with 92 total steals ... Knocked down 45 three's with 3.2 assists per game ... Undecided and hopes to play in college.

Cape Ann League Baker Division Player of the Year emerged as one of the most dangerous and reliable scorers on the North Shore ... Scored at an average of 15.1 points per game, tops among local CAL players ... Also led the CAL Baker champion Generals in assists with 60 ... Scored 36 in state tournament win over Matignon ... Six-foot-1 point guard shot 44 percent from the floor and made 28 three-pointers ... Attacked the rim and got to the line 103 times on the season.

Tower of power was one of only three players on the North Shore to average a double-double ... Six-foot-7 first-team All-Eastern Independent League selection averaged four blocks per game and could guard any position ... Put up 14 points per game and 12 rebounds ... Posted a 22-point, 14 rebound double-double in NEPSAC tournament against Hyde ... Solid football two-way end from Medford is beginning to field Division 1 hoop interest.

Defensive stopper and excellent rebounder was a Catholic Conference all-star ... Averaged 10 points per game while pulling down 9.5 rebounds ... Also averaged two blocks per game while captaining St. John's to the Division 1 North quarters ... Posted 17 points and 12 boards in win over D2 North finalist Brighton ... Lexington native posted more than a dozen double-doubles on the season ... Committed to play at Johns Hopkins University.

Captain and Northeastern Conference all-star helped the Witches go unbeaten in NEC play and finish with 21 wins ... Stretched the floor by knocking down a team-best 56 three pointers ... Averaged 12.2 points per game ... Dropped 30 points in season opening win over Marblehead ... Scored 20 in win over rival Beverly and 23 in playoffs vs. Chelsea ... Totaled 35 steals ... Considers uncle Elvin Rodriguez his bigger influence and hopes to study engineering or business in college.

The Tigers Most Valuable Player and rock in the middle helped Ipswich qualify for the state tournament for the first time in a decade ... One of only three players to average a double-double at 12.2 points and 12.7 rebounds per game ... Shot 45 percent from inside the paint ... Six-foot-five stopper had 33 blocks ... 87 of his team-leading 257 rebounds came on the offensive glass ... Led Tigers with 16 points in playoff clinching win over Gloucester ... All-CAL selection can also dunk.

Northeastern Conference first-team selection played much bigger than his 6-foot-3 size as Salem's lone big man ... Led the NEC South champion Witches in rebounding at 7.8 per game ... Also scored 12.6 points per game ... Rangy forward could step behind the line and made 48 three-pointers ... 25 points, 12 assist effort helped Salem topple D1 rival Everett ... Scored 21 in playoff victory over Wakefield ... Hopes to study business in college and is considering Bryant, among others.

Dogged defender did all the little things to help Hamilton-Wenham win the CAL Baker and reach the Division 4 North semi's ... Team captain averaged seven rebounds per game, with 52 of those coming on the offensive glass ... Picked up 50 steals and 34 assists ... Had 15 rebounds in win over Manchester ... Made 42 percent of his shots from the floor ... Carries 3.97 GPA and is among area's top student-athletes ... Also a Salem News all-star in soccer.

All-Cape Ann League center was a game-changer for the Chieftains as they qualified for the Division 2 North playoffs ... Anchored the team's defense ... Averaged 10.6 rebounds per game to rank among the North Shore's leaders ... Six-foot-five post power racked up 22 points against North Reading ... Notched 18 against Manchester Essex and 17 against Lynnfield ... Had double-double in tourney clinching win over Triton ... Also a Salem News all-star for soccer.

One of the better pure shooters ever at Beverly High averaged 16.4 points per game, fifth in the NEC ... All-Northeastern Conference pick had second most point of any player in Scott Lewis dozen years ... Drilled 59 three-pointers, including nine against rival Lynn English ... Totaled 29 points in that game ... Led Beverly to upset of Danvers with 26 points ... Two-year captain had 4.6 rebounds a night ... Carries a 3.93 GPA and will play at Gordon College while studying special education.

Talented guard had a knack for both shooting and passing while earning Catholic Central League all-star honors for the second straight season ... Averaged 15.7 points per game, his second straight season over 15 a night ... At 5-foot-11 has quickness and floor vision ... Handed out 4.4 assists per game ... National Honor Society member dropped 33 points in an overtime win over Winthrop.

The Salem News sports staff presents its annual high school sports all-stars and coaches of the year for the 2015-16 winter season.