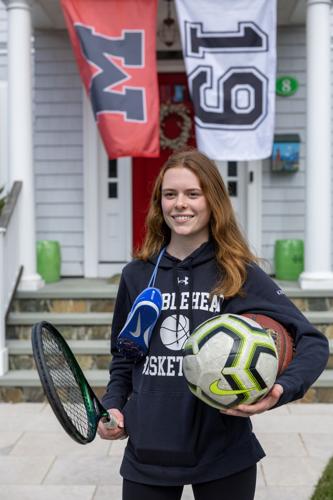 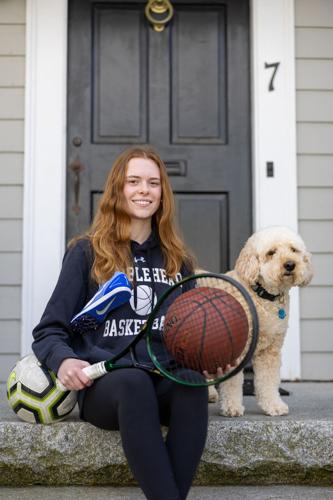 It shouldn’t come as any surprise that Marblehead High senior Ella Kramer led the North Shore in assists for girls soccer last fall.

After all, Kramer is the type of student-athlete that tries to assist her fellow students, athletes and citizens in everything they do.

As a leader among Marblehead’s Class of 2022, Kramer has volunteered with the Best Buddies program and helped spearhead the Magician girls soccer team’s partnership with the North Shore Rovers soccer program, which aims to give fun soccer experiences to kids with physical or intellectual disabilities.

“Ella immerses herself in the greater Marblehead community,” MHS athletic director Greg Ceglarski said. “She’s a regular at clinics, camps and fundraisers, and in all these roles she selflessness, class and respect. She’s a motivated and inclusive leader.”

A Salem News all-star in both girls soccer and girls basketball, Kramer enjoyed dynamite senior seasons in both sports while helping her Magician teams reach the state playoffs. Her 13 assists tied for the North Shore lead in soccer, and she was named to the Eastern Mass. Girls Soccer Coaches Association’s all-star team. On the hardwood, she drained 50 3-pointers and was among the North Shore’s best shooters from long distance.

As a captain of both sports, Kramer is always aware she’s setting an example for the younger players following her lead. To that end, she’s been a peer mentor and represented Marblehead at the Northeastern Conference’s summit on leadership and inclusion.

“Her compete level is off the charts, but as fierce as she is on the field, she’s that caring outside of competition,” Ceglarski said. “She’s always watching out for younger players, making sure they learn the ins and outs of being on the team. It’s players like Ella that helps us develop our future leaders.”

Kramer is also one of the most versatile athletes in the area, with varsity letters in both spring track and, now as a senior, tennis.

“She’s been a varsity athlete in 10 of her 12 seasons, and it would be 11 if we didn’t lose a season to COVID in 2020,” Ceglarski noted. “She made an immediate impact and has proven to be a valuable asset for our entire program ever since.”

Carrying a 4.37 grade point average, Kramer has tackled Advanced Placement courses like Literature, American Government, European History, Calculus and Environmental Science, including four difficult AP courses in her senior year. She’s a National Honor Society member as well as as the National Math and French Honor Societies and received national recognition from the College Board for her performance on the PSAT and AP exams.

She’s passionate about the environment (having been an officer for Marblehead’s chapter of the National Green School Society) and hopes to work in that field, or in psychology, after attending college.

College you will be attending: Undecided

What is your favorite book?: The Hunger Games by Suzanne Collins

What is your favorite movie?: ‘How the Grinch Stole Christmas’

Who is your favorite singer of musical group?: Taylor Swift

What is your favorite app?: Snapchat

What is your favorite class in school?: Environmental science

What athletic feat are you most proud of?: Being named an Eastern Mass. all-star in girls soccer and playing in the Senior All-Star Game.

What does being a leader among your peers mean to you?: Setting good examples for everyone around me by being hard-working, friendly, inclusive and kind.

Where do you see yourself 10 years from now?: I hope to be doing something related to psychology or environmental science. Though I don’t know exactly what my job will be, I see myself continuing to be a leader in my field.

What’s something most people don’t know about you?: I can juggle with my hands and my feet.

Read all about the nominees for the 2022 Salem News Student-Athlete Award, one of the North Shore's most prestigious honors for the last 60 years.