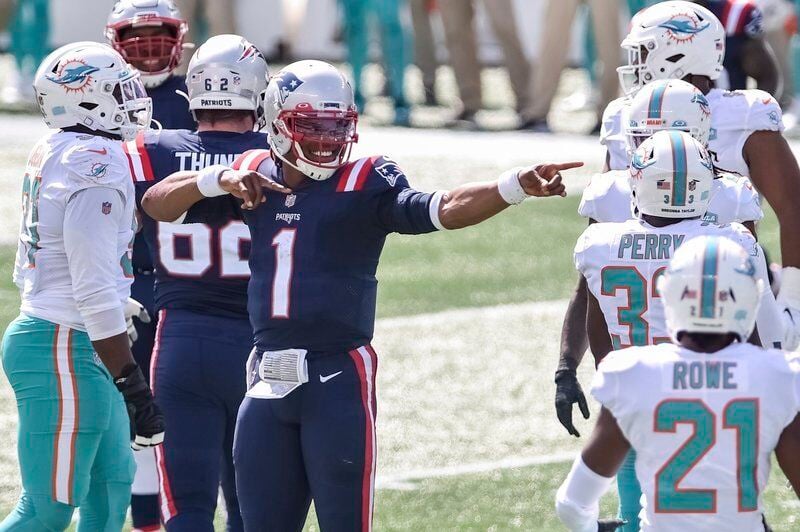 JAIME CAMPOS/Staff photoNew England Patriots quarterback Cam Newton signals for a first down during Sunday's win over the Miami Dolphins. Newton enjoyed a terrific debut to lead the Patriots to a 21-11 win on opening day. 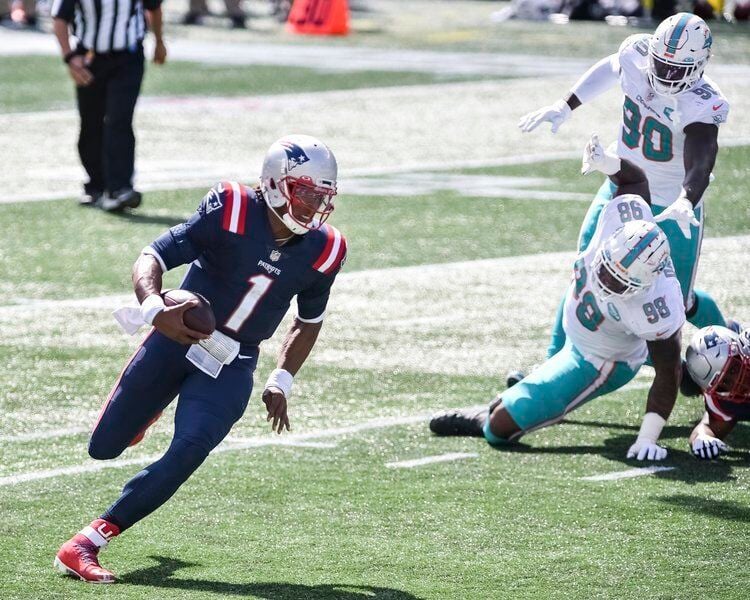 JAIME CAMPOS/Staff photoNew England Patriots quarterback Cam Newton signals for a first down during Sunday's win over the Miami Dolphins. Newton enjoyed a terrific debut to lead the Patriots to a 21-11 win on opening day.

What will the New England Patriots offense look like with Cam Newton at quarterback? That’s been the million dollar question ever since Newton signed this summer, and earlier this month the new Patriots’ signal-caller was asked point blank what people can expect?

“You just got to tune in and see,” Newton responded while grinning ear to ear.

Patriots fans finally got a chance to tune in Sunday, and if Newton’s performance was any indication, New England is in for a real treat.

Newton was the unquestioned star of the show in New England’s 21-11 victory over the Miami Dolphins, turning in a vintage performance to lead the way through the air and on the ground for the Patriots.

The 31-year-old carried the ball 15 times for 75 yards and two touchdowns in the win, which was both the second most carries of his career and also one of the most prolific rushing performances by a Patriots quarterback in franchise history. On top of that, Newton was also pinpoint in the passing game, completing 15 of 19 passes for 155 yards.

But more important than the numbers was how he got them. After two decades of tailoring the offense to Tom Brady, Bill Belichick and Josh McDaniels had the opportunity to rework their system to maximize Newton’s unique talents. The result is a smash-mouth, power running style that retains the short passing elements that have defined New England’s offense for more than a decade.

The Patriots set the tone early by rushing the ball on their first five plays, with rookie offensive lineman Mike Onwenu coming on as a sixth lineman for the very first play of the game. New England made frequent use of heavy personnel sets, bringing as many as two extra linemen along with the tight ends and fullback in short yardage situations to give Newton room to pick up the first down.

On his first touchdown run, Newton practically walked into the end zone untouched inside this type of formation. Later, on New England’s last scoring drive, he picked up a first down with a 12-yard scramble and then converted a 4th and 1 near the goal line, bowling through the defense to set up Sony Michel’s 1-yard touchdown.

The threat posed by Newton’s size and mobility forces defenses to stay honest up front, which opens up the short passing game that Patriots fans know so well. Coming out of halftime, Newton immediately led New England down the field in Brady-like fashion, hitting Julian Edelman for back-to-back first down completions followed by a third to James White. He’d finish the drive with an 11-yard touchdown run, and on the subsequent drive he should have had his first touchdown pass in New England, rolling out and hitting a wide open N’Keal Harry before the former first round pick fumbled the ball out of the end zone as he was tackled for a turnover.

That New England would emphasize the power running game with Newton under center isn’t a surprise. The Patriots have been moving in that direction for the past two years, the problem has largely been finding the right personnel to execute and dealing with untimely injuries.

But now? The Patriots have everything they need to embrace this identity, and in Cam Newton they have found the perfect centerpiece.