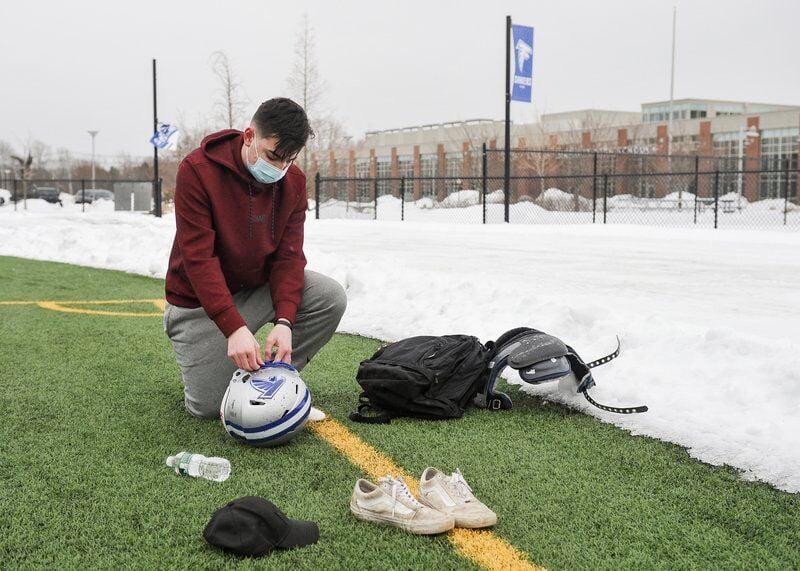 Danvers' Maison Colella fixes the straps of his helmet prior to football practice. JAIME CAMPOS/Staff photo 2/22/2021 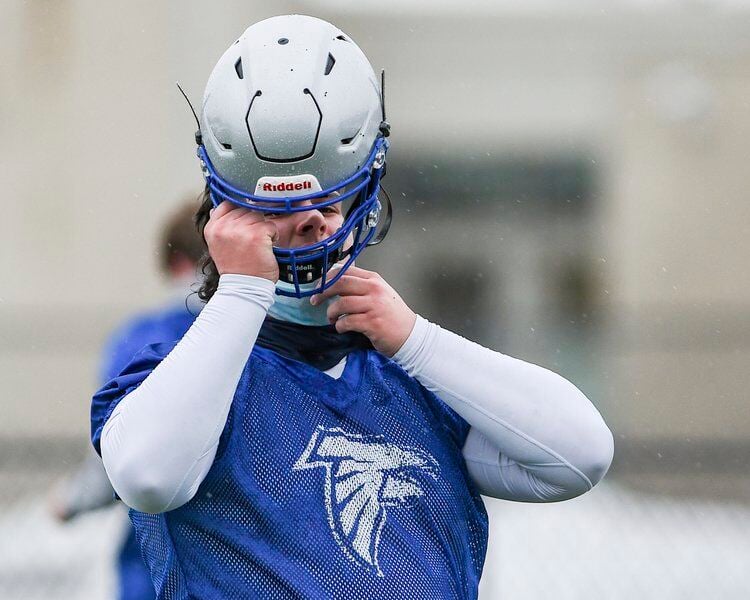 Evan Glynos fixes his mask before wearing his helmet after a water break during Danvers High's first practice of Fall 2. JAIME CAMPOS/Staff photo 2/21/2021 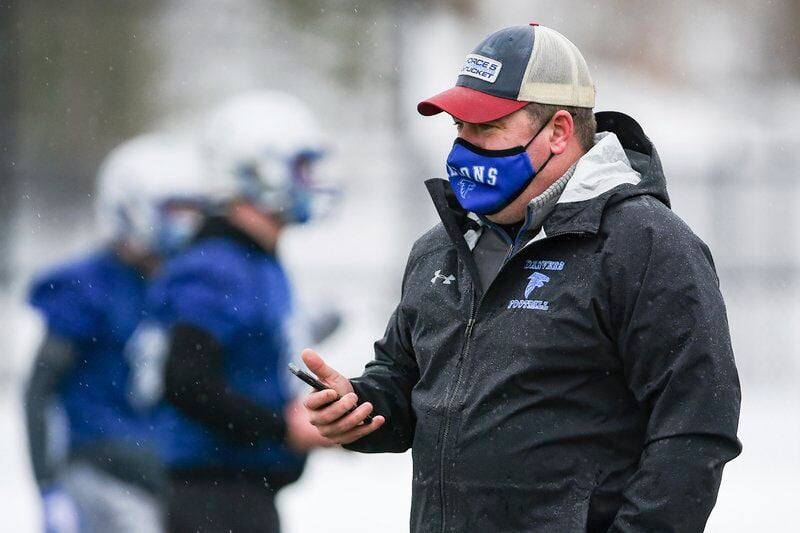 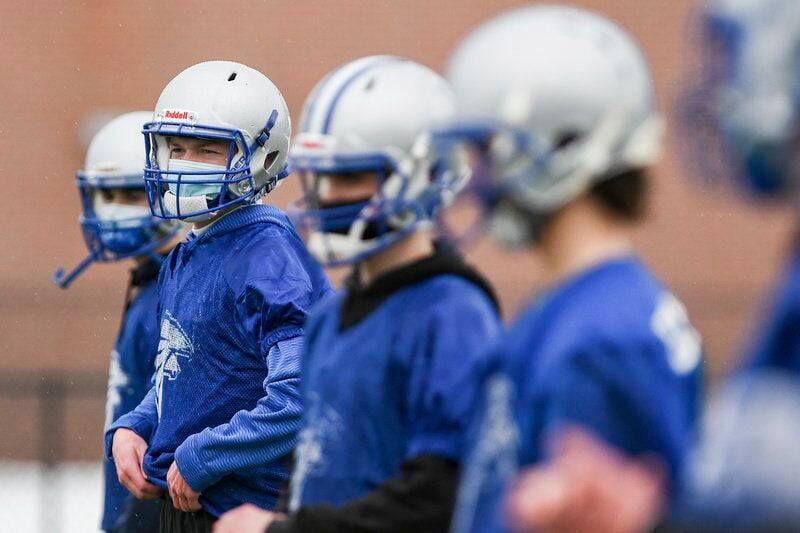 Quarterback Darren McDermott leads a group of quarterbacks in a passing drill during Danvers' first football practice of the year on Monday. JAIME CAMPOS/Staff photo 2/21/2021 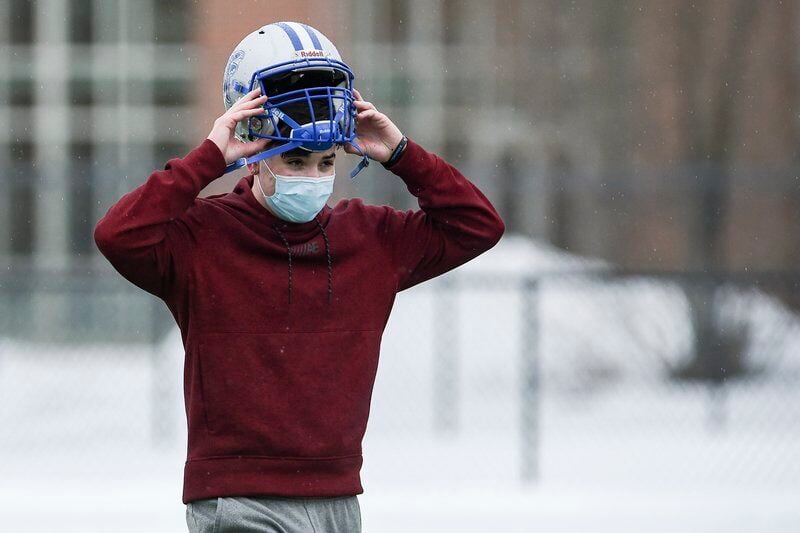 Maison Colella wears his helmet after a water break during Danvers first football practice of the Fall 2 season on Monday.  JAIME CAMPOS/Staff photo 2/21/2021 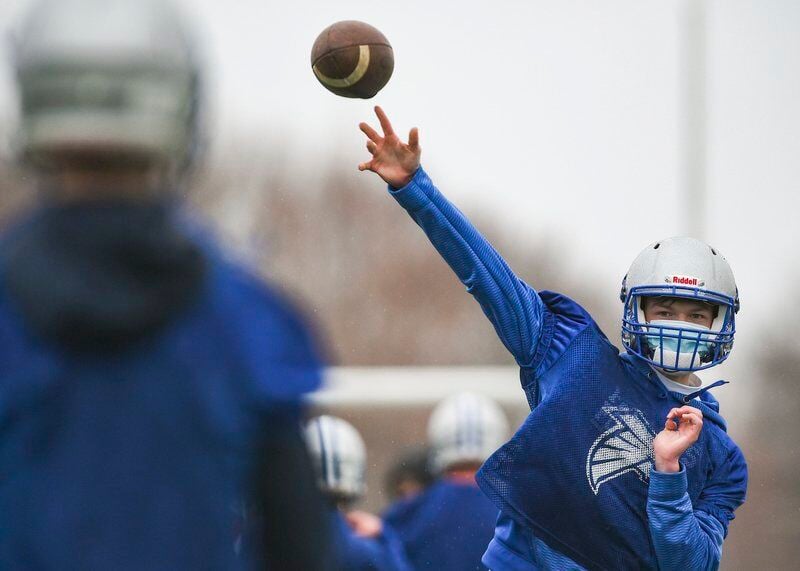 Danvers' Maison Colella fixes the straps of his helmet prior to football practice. JAIME CAMPOS/Staff photo 2/22/2021

Quarterback Darren McDermott leads a group of quarterbacks in a passing drill during Danvers' first football practice of the year on Monday. JAIME CAMPOS/Staff photo 2/21/2021

Years ago, one local football coach said he didn't care if a high profile game was played at home, at an opponent's stadium or, if necessary, in a parking lot.

At the dawn of the 'Fall 2' season that puts football in the middle of New England winter thanks to the coronavirus pandemic, North Shore football teams are living that reality. Team across the region opened practices Monday outside, in their field houses or met remotely via Zoom, with recent snowfall and forecasted rain wrecking havoc on the planned start.

Despite some challenges, players and coaches were thrilled to be back together preparing for the start of their 7-week seasons that will begin with games on Friday, March 12.

"The kids are so excited. Today felt different ... it felt great to be preparing for a game," said Beverly head coach Andrew Morency, whose team may run through its play scripts in the parking lot Tuesday if the grass remains soaked.

The Panthers, 60 players strong on varsity plus 25 new freshmen, met virtually Monday because of the rain. It's a senior-heavy team that's happy to build on what it learned through playing time earned in 2019 and through a myriad of team meetings and walk-throughs during the Fall 1 season.

"The Fall 1 stuff had been huge as far as working through the protocols. We can use that to guide this Fall 2, tell the players 'OK, this will be the same way we did it in the fall'," said Morency, who plans to have practices outside as often as possible, both to stay safe and to acclimate the Panthers to playing conditions.

"The biggest thing we have going for us as a sport is the ability to be outside," Morency said. "We want to be out there in any way shape or form. Our older guys are clamoring to get going. It's a tight knit group and they're psyched to be back."

One big change for Beverly: they'll be playing home games this Fall 2 season on the turf at Forti Field, not at Hurd Stadium on grass.

Overall numbers seem to be up across the board. In Danvers, head coach Ryan Nolan said over 70 kids showed up for Monday's Day 1 practice at Dr. Deering Stadium's turf, 34 of which came from a promising freshmen class.

"The numbers are as big as we've had, so we're hoping they still come back after today," joked Nolan.

Fresh off a 7-0 regular season and subsequent top seed in Division 3 North competition back in 2019, Nolan and his experienced group are eager to get back out there. The turf field is in tip-top shape, he said, and one thing everyone representing the program will have to look forward to is practicing on that surface on a regular basis.

"I can't emphasize enough what a great job (Danvers Public Works) did. They took care of everything early so that the field is in great condition," said Nolan. "We normally don't get the opportunity to practice on the actual field too much in the fall with soccer and field hockey going on every day, so it will be nice to be able to do that this season.

"There's just a lot of excitement to finally be able to go out there and really, it was a relief to be on the field (Monday)."

Peabody practiced in its fieldhouse on Monday night with the city still working to clear all the snow off Coley Lee Field. The Tanners had similarly strong numbers across all four classes and are excited to to and improve on a four-win 2019 campaign.

The Tanners are hoping to have an outdoor practice Tuesday and will build towards a pair of early March scrimmages before their March 12 opener against Winthrop.

"It's the first time we've had the whole team together at a workout, so it was very productive. Everyone was excited to be back together again and motivated to get to work," said head coach Mark Bettencourt. "(Tuesday) should be a lot of fun."

Over at Bishop Fenwick, head coach Dave Woods and his squad were equally ecstatic to get back in the football flow. The Crusaders, too, boasted big numbers throughout the program with 76 kids showing up on Monday and 6-8 more expected to join the team.

"We got a few hockey kids that don't usually play and some soccer kids that wanted to give football a try, too," said Woods. "We had a decent number of kids returning as it was, so it's a good mix and we're excited to get going."

It seems to be business as usual for our local programs, albeit in a more expedited fashion. Even the February weather wasn't going to put a damper on the highly anticipated return to the gridiron.

"I would say our kids are just happy to be out there. We've practiced in a lot colder weather and wetter weather (in the past), so in that regard it really wasn't an issue," said Woods. "At one point (Monday) someone told me it was like being in heaven, so I don't think anyone's really complaining."

St. John's Prep had virtual meetings Monday and will ramp up practices later in the week. Hamilton-Wenham was also in the gym getting its conditioning practices in, while in smaller groups.

Under state rules, teams complete three conditioning practices in helmets before putting on the full pads. The first full contact practices can be held this Saturday and the first possible scrimmage date is March 2.